Since April 25, 2022, a photo of large-scale explosions in bryansk, russia, has been circulating on the Internet. The burning of military facilities and oil depots is reported. The caption also states that the explosions were caused by “watering them (russia) with fire.” However, the photo actually shows explosions in Libya in 2011. 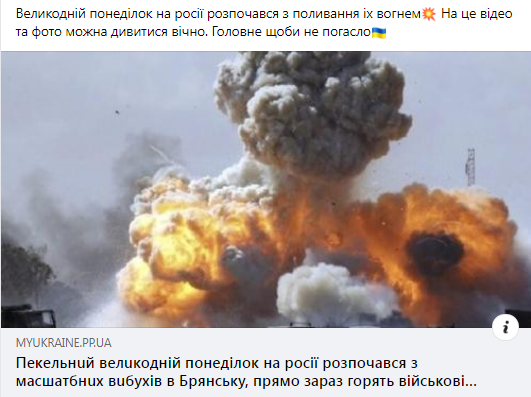 A reverse image search on Google Images proved that the photo showed explosions in Libya. On March 20, 2011, American and European forces attacked Libya’s air defenses with aircraft and cruise missiles. The image shows several vehicles belonging to forces loyal to Muammar Gaddafi, which explode after a coalition airstrike on the road between the cities of Benghazi and Ajdabiya.

Pay attention! The text of the news is written in a combination of Cyrillic and Latin (compare: instead of Cyrillic “i” in the text the Latin “u” is used in the words «пeкeльнuй», «вuбухів», «велuкодній», «масшатбнuх» and «об’єктu»). The text itself is emotional. Such signs indicate that you are facing either a fake or a clickbait.

In addition to it, the posts provide a link to the telegram channel, where the video from the scene was allegedly published. However, the link does not lead to a specific post, but to a closed telegram channel. You must wait for the administrator’s confirmation to access the channel. Such news with impressive photos or headlines is spread to increase the number of subscribers in the telegram channel in a deceptive way.

On April 25, 2022, a fire broke out at an oil depot in bryansk, russia, and residents reported that it had been preceded by explosions. The cause of the fire is not specified. However, photos illustrating this news in fake posts were taken in 2011 in Libya.