FALSE: Photo of the shelling in Kharkiv by the Russian occupiers

FALSE: Photo of the shelling in Kharkiv by the Russian occupiers

The network is spreading a photo showing the shelling in Kharkiv allegedly carried out by the Russian occupiers. 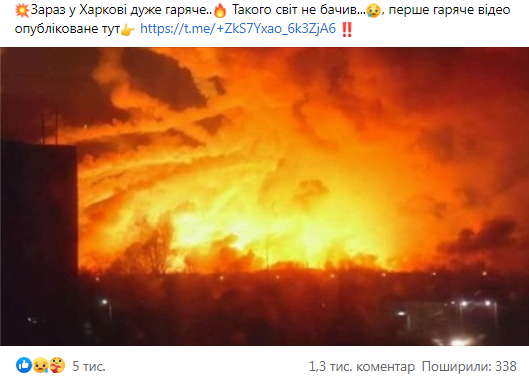 However, the photo shows explosions of ammunition at a military depot in Balaklia, Kharkiv region, which occurred in 2017.

The posts provide a link to the telegram channel where the video from the spot of the event was allegedly published. However, the link does not lead to a specific post, but to a closed telegram channel with news. You must wait for the confirmation from the administrator to get access to the channel. Such news with impressive photos or headlines is spread to increase the number of subscribers in a deceptive way.

The author published the post on April 17, 2022. By reversing Google Images, we found the original posts with this photo. On the night of March 23, 2017 in Balaklia, Kharkiv region, ammunition was detonated at a military depot. At 2:46 a.m. a fire broke out with the subsequent detonation of ammunition.

On the morning of April 17, 2022, the head of the Kharkiv Regional State Administration, Oleg Synegubov, said that over the past 24 hours, the occupiers had fired 23 artillery, mortar, MLRS shells and 1 rocket at the city districts. As a result of the shelling, residential buildings and infrastructure facilities in Pivnichi Saltivka, Pyatihatok, Oleksiyivka, the city center, HTZ and Derhachiv were damaged.

On April 17, 2022, Volodymyr Zelensky stated that in the last 4 days in Kharkiv, 18 people had died and 106 had been injured in the shelling of the Russian Federation. The Russian occupiers continuously fired on the sleeping areas of the city.

Writing about the shelling in Kharkiv, the author of the post uses an old photo – it shows explosions of ammunition in Balaklia, Kharkiv region.