From March 17, 2022, the network spreads information that the Russian occupiers captured almost whole Mariupol. Information from Ramzan Kadyrov’s Telegram channel is provided for confirmation, where he claims that 98% of the city is occupied by the occupiers. They also add that Russia strikes only on military infrastructure and does not threaten civilians. 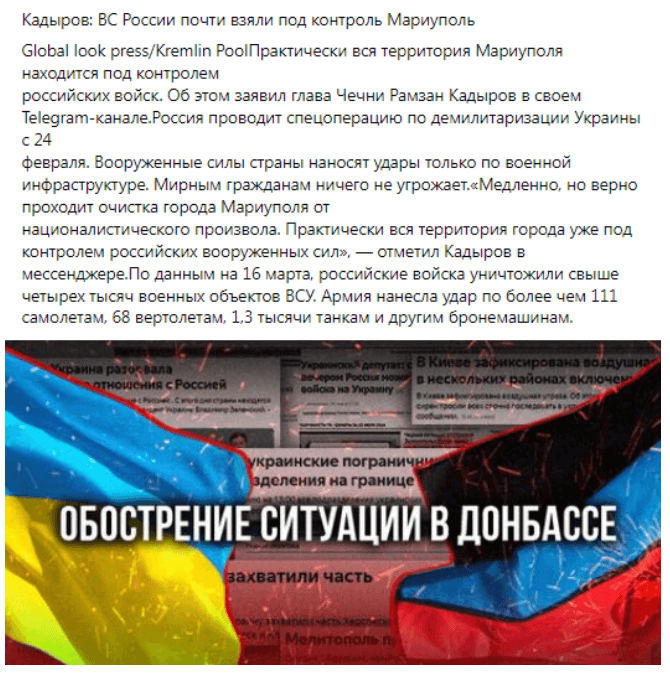 However, as of April 8, 2022, most of the city was controlled by the Ukrainian Armed Forces.

The Center for Strategic Communications and Information Security communicated that according to information from the adviser to the mayor of Mariupol Petro Andryushchenko, such reports about the capture of 98% of the city are false.

Petro Andryushchenko said that the Russian occupiers had advanced one quarter in control and relatively controlled the area around the destroyed Drama Theater. According to him, this is not control of the city center.

It is known that as of April 8, 2022, most of the city remained under the control of the Armed Forces of Ukraine. This Primorsky district, part of the Left Bank in the Azovstal region, the coast from Azovstal to the port, the Port itself and the factory.

On the left is a map of hostilities in Ukraine as of April 15, 2022. Most of Mariupol is under the control of the Armed Forces of Ukraine; on the right – the city borders of Mariupol

The fact that Russia destroys only military facilities and does not threaten the civilians of Ukraine is also false. Russia is deliberately carrying out massive shelling of civilian infrastructure. Adviser to the mayor of Mariupol Petro Andryushchenko said that the number of victims of Russian shelling in the city could approach 20 thousand. Hundreds of civilians have been killed in Bucha, Gostomel, Borodyanka and Motyzhyn.

Reliable information about the course of the war can be found in the following sources: