FALSE: The serial number of the missile proves that the Armed Forces launched "Tochka-U" at the railway station in Kramatorsk

FALSE: The serial number of the missile proves that the Armed Forces launched “Tochka-U” at the railway station in Kramatorsk

On April 8, 2022, the railway station in Kramatorsk (Donetsk region) was fired upon by two Tochka-U missiles. The shelling killed 59 people and injured 107 people.

The network spreads information that Ukraine is responsible for these missile attacks. The main argument is the serial number of the missile (Ш91579), which is similar to the number of missiles that Ukraine previously used against Russian forces.

In addition to it, Facebook users claim that the “Tochka-U” complex hasn’t been a weapon used by the Russian army for such a long time. 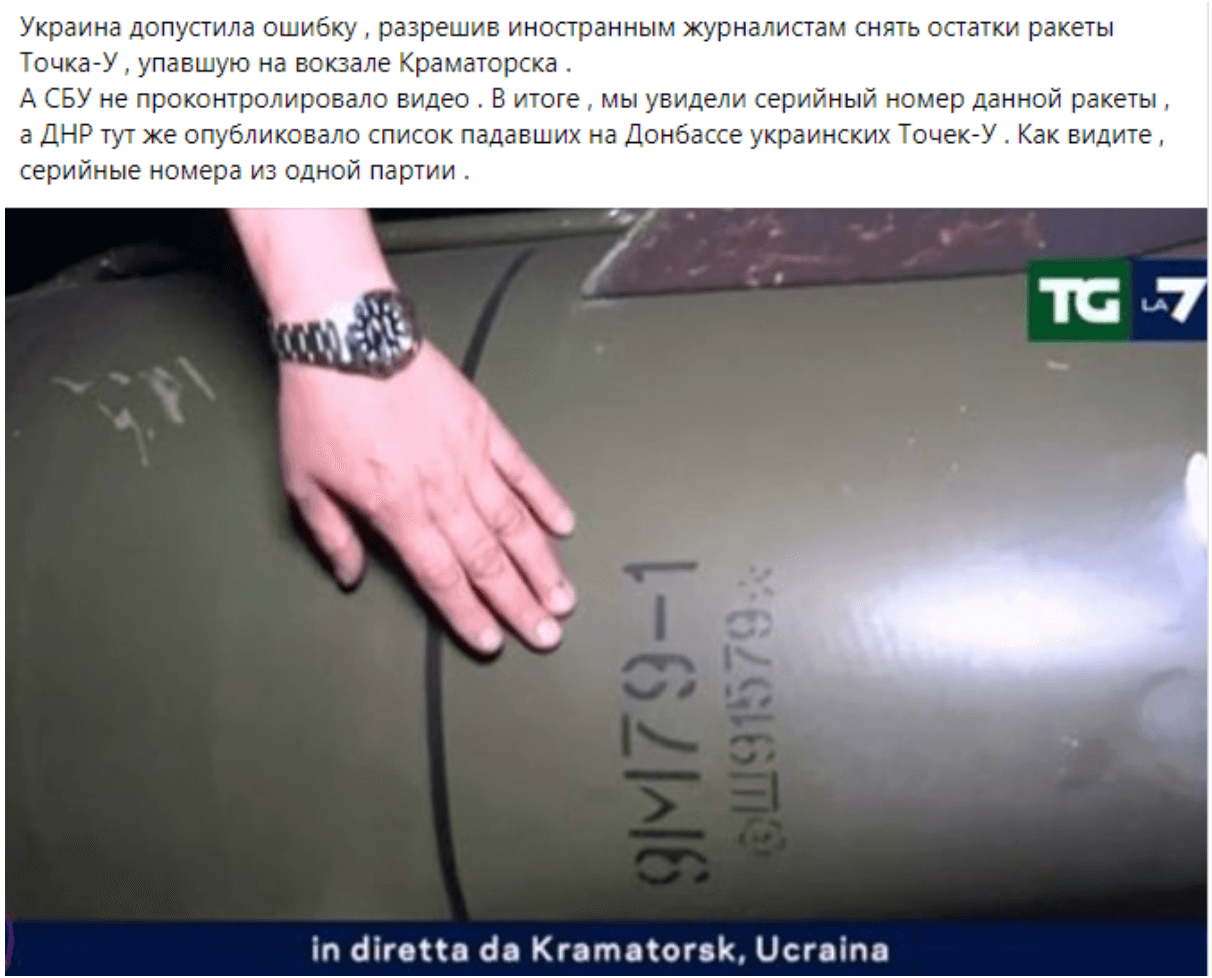 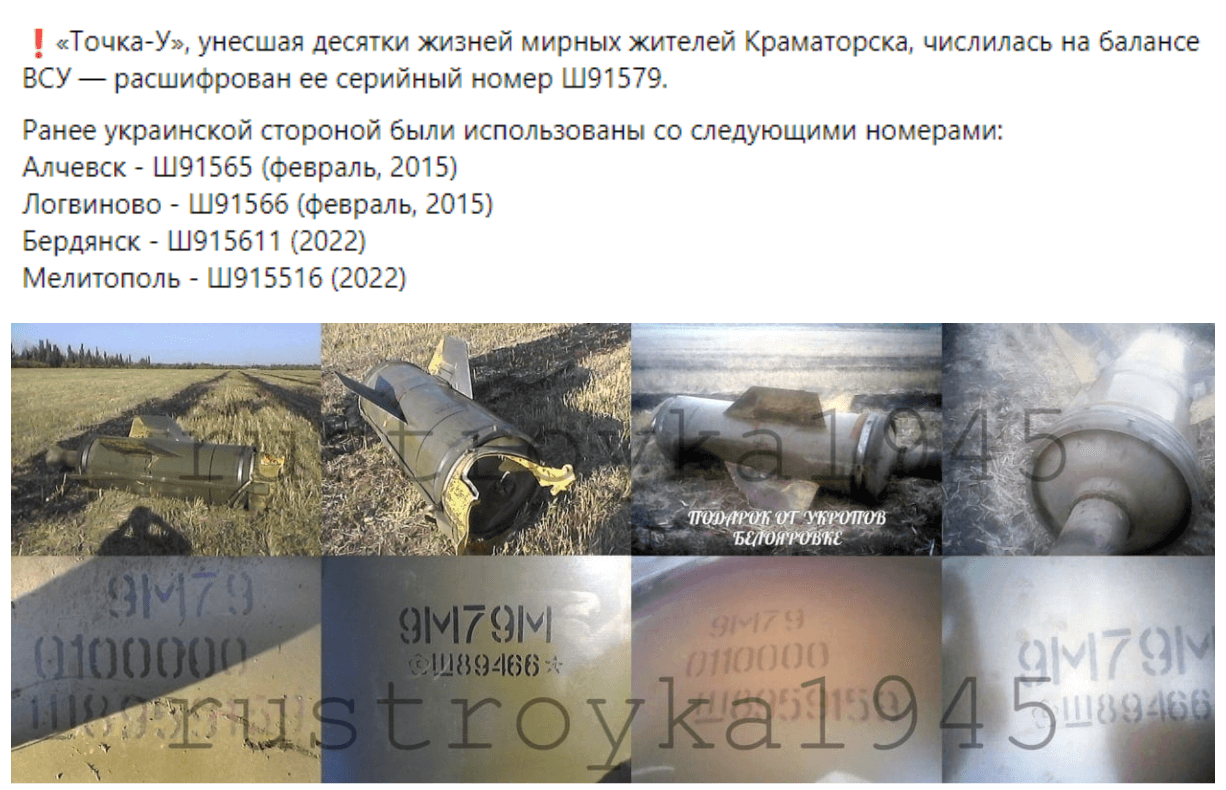 “Tochka-U” is in Russia’s arsenal

Officially, Tochka-U is really no longer on Russia’s military balance. This is evidenced, for example, by data from the annual directory The Military Balance 2022. However, there is evidence that Russia still uses this missile system.

First of all, Russia itself has repeatedly admitted that Tochka-U is used in the military. Thus, in 2021, “Tochka-U” was spotted at a military parade until May 9 in the Russian city of Korenovsk (Krasnodar Krai). 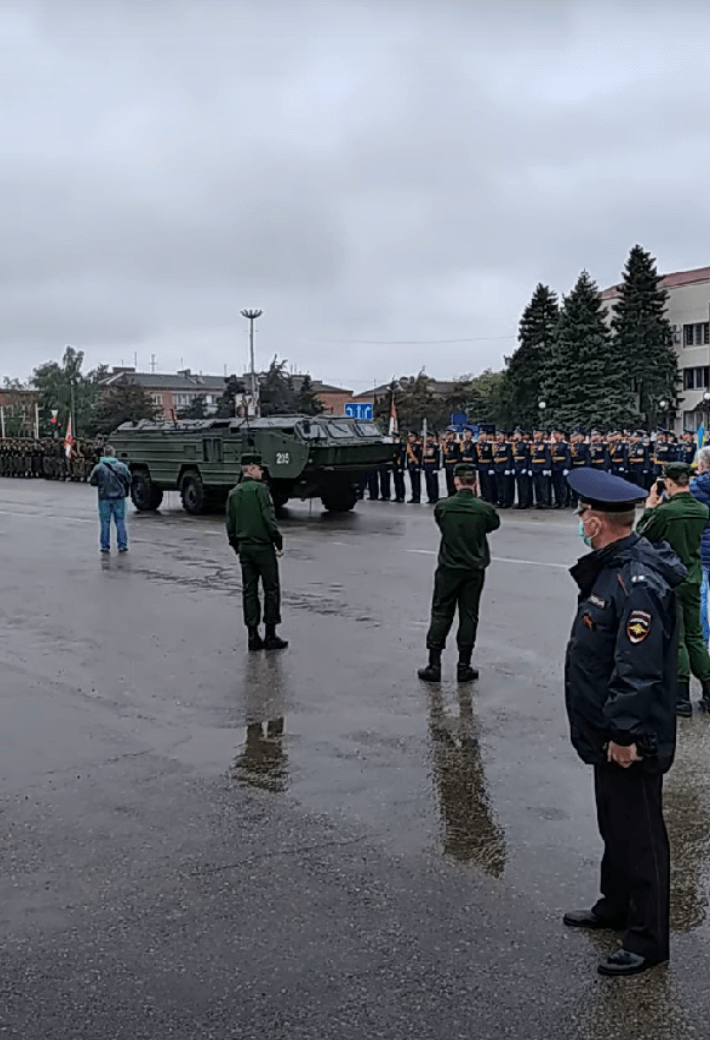 Photo from the parade

Russia also used Tochka-U during the Caucasus 2020 military exercises in 2020 and the «Allied Determination» in 2022. In addition, “Tochka-U” is in service of the so-called “LPR” and “DPR”.

Secondly, the movement of Russian-marked Tochka-U missiles before and after Russia’s large-scale invasion of Ukraine has been repeatedly reported by independent investigators from the InformNapalm and Conflict Intelligence Team (CIT). 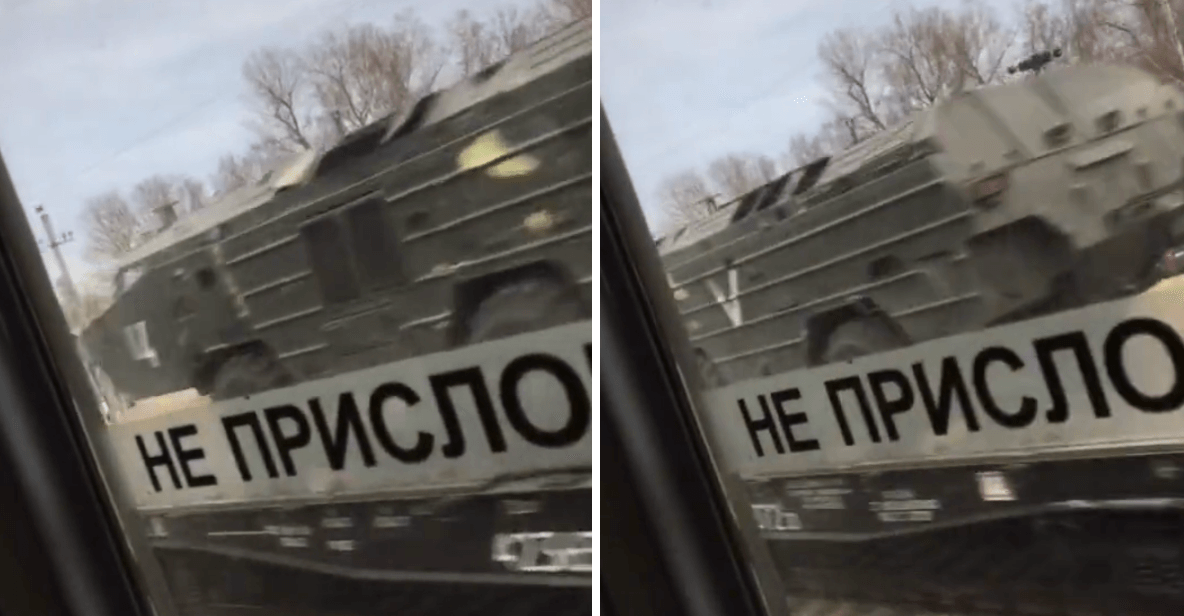 Tochka-U is a missile system developed in the Soviet Union. Ukraine does not produce missiles for this complex, so it inherited all available ammunition from the USSR or from Russia after the collapse of the USSR. The only manufacturer of these missiles was the Votkinsk plant in Russia. Currently, the following countries are armed with Tochka-U : Russia, Ukraine, Belarus, Armenia, Kazakhstan, Azerbaijan, Bulgaria, Yemen, North Korea, Syria.

Missile parties are not tied to a specific country. In other words, having the serial number of the missile, we will not be able to determine who exactly used this missile. This is evidenced, for example, by the comparison of two Tochka-U missiles, which was recently reported on the net.

The first missile was photographed in the Syrian city of Khan al-Sabil. Probably, the Syrian army used “Tochka-U”. The second missile was in the city of Snizhne (Donetsk region), which has been under occupation since 2014. It could be launched by Ukrainian or Russian forces. 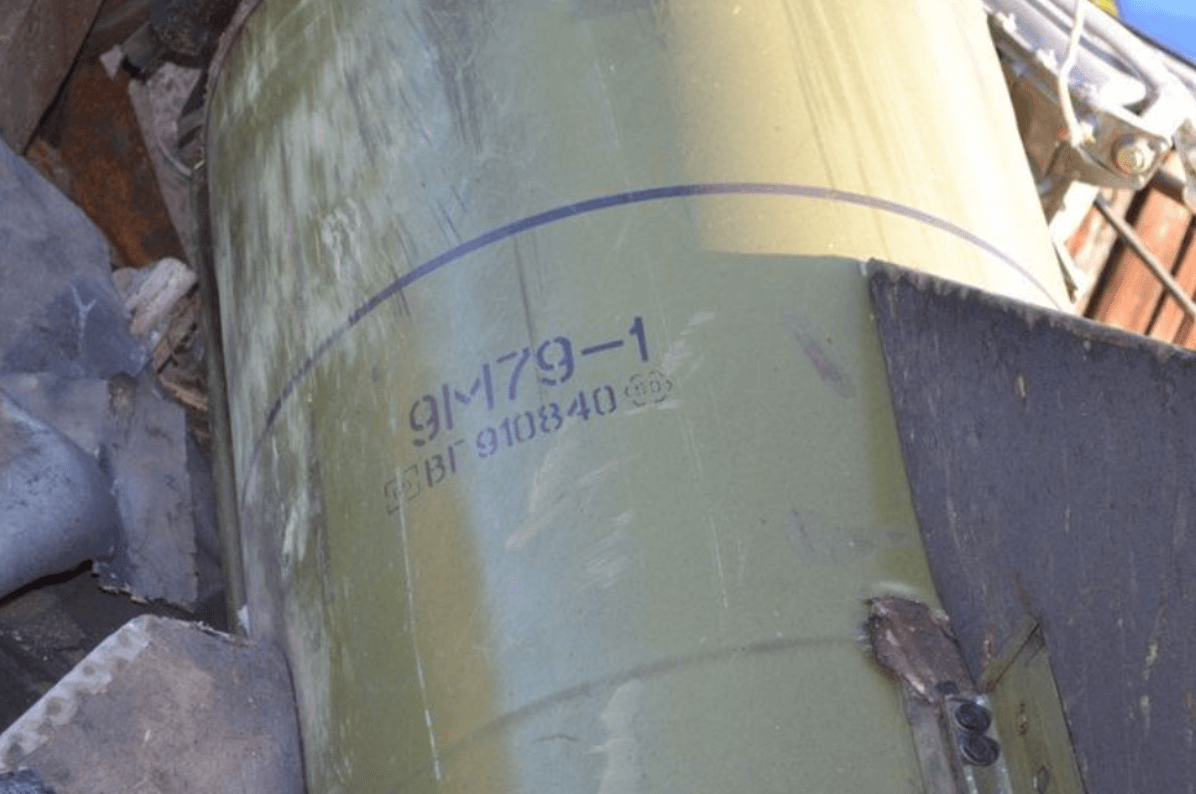 Both missiles have a similar serial number (VG910865 and VG910849), but, apparently, they were in service in different countries. Analysts at CIT , which has been monitoring military conflicts since 2014, confirm that it is impossible to determine who the operator of the missile system was using a serial number.

We remind you that VoxCheck refuted the fake that Russia allegedly does not have a “Tochka-U” in its arsenal. Therefore, the statement “Russia does not have a “Tochka-U “and therefore is not involved in the shelling” is not an argument. In addition, after a large-scale invasion on February 24, Russia has already used these missile systems against Ukraine.

The first evidence that Russia carried out a missile attack is reports before and after the shelling. Thus, on April 7, the authors of pro-Russian channels warned residents of Kramatorsk against using rail transport. And immediately after the shelling of the station on April 8, there were reports on some channels that Russian forces hit the gathering of the Armed Forces of Ukraine at the Kramatorsk station.

The second possible evidence is the announcement on the morning of April 8 about the launch of 2 missiles (without specifying the missile complex) in the occupied city of Shakhtarsk in the Donetsk region. In this case, there are at least 2 matches. First, the number of missiles: 2 missiles were launched from Shakhtar, and the station in Kramatorsk was fired with 2 missiles. Secondly, the technical possibility: the distance between Shakhtar and Kramatorsk is about 90 km, while the maximum range of “Tochka-U” – 120 km.

However, there is a lack of precise timeframes to fully confirm Shakhtarsk as a Tochka-U launch site. The flight speed of this missile is 1036 m / s. That is, the missile should have covered the distance between Shakhtar and Kramatorsk in one and a half minutes. Therefore, the difference between reports of a rocket launch and reports of a strike in Kramatorsk should be no more than a few minutes. Time of reports of missiles in Shakhtarsk – 10:25. Reports of the danger of air strikes in Kramatorsk appeared around 10:30. However, official reports about the missile strikes on the station were published at 10:44.

It cannot be ruled out that the rocket was launched not from Shakhtarsk, but, for example, from another occupied settlement of Donetsk region. CIT published a zone on its channel from which they could launch Tochka-U. 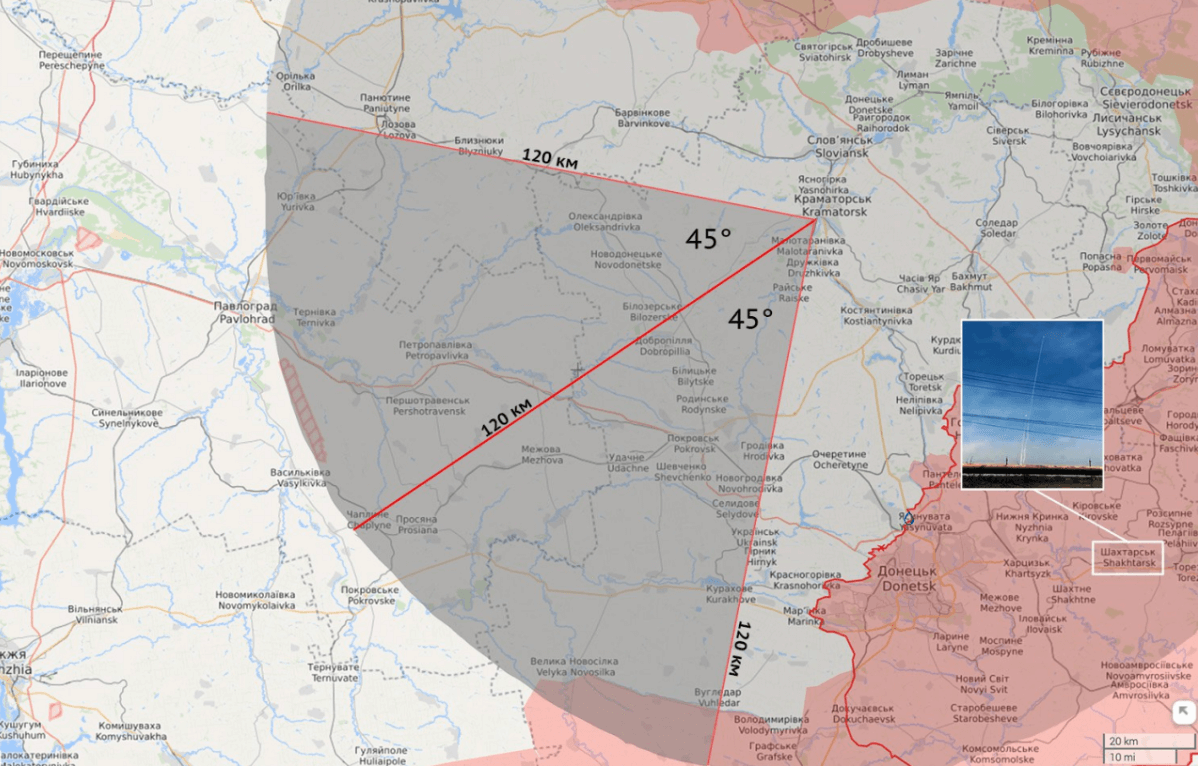 The area from which the missile could be launched (the occupied territories are marked in red), CIT

Ukraine’s involvement in the shelling can be ruled out, as there is neither political nor military expediency in the murder of their own citizens. Russian propagandists say that Ukraine wanted to disrupt the evacuation of civilians in this way. However, evacuation, on the other hand, is beneficial for Ukraine: the authorities have repeatedly called on civilians to leave hostilities, as civilians may interfere with the work of the Ukrainian military. There was no need in Ukraine to create an additional pretext for accusing Russia of war crimes, as it had become known in early April that Russia was responsible for the mass killings of civilians in the Kyiv region.

Moreover, the strike on the station is not only a threat to civilians, but also damage to transport infrastructure. The state uses the railway during the war both to evacuate civilians and to transfer military units. Therefore, there was no reason in Ukraine to harm its interests. Russia, on the other hand, often uses the killing of civilians and the destruction of infrastructure at this stage of the war to intimidate the population and put pressure on the political leadership.