First Year: In No Hurry, Or Measuring the Reformist Pace of Groysman’s Government | VoxUkraine

First Year: In No Hurry, Or Measuring the Reformist Pace of Groysman’s Government

VolodymyrGroysman’s Cabinet of Ministers has been governing the country already for more than a year, since April 14, 2016. The predecessor team – Arseniy Yatsenyuk’s second government – worked for nearly a year and a half, since December 2, 2014, and was known, among other things, for a record number of foreigners in the government. VoxUkraine compared reformist initiatives of two teams’ during their first year in office.

It worth noting that responsibility for reform progress lies not only within government. Apart from the Cabinet of Ministers, progressive changes to the legislation can also be initiated by People’s Deputies and the President. No draft law can be enacted until it is supported by the Parliament and signed by the President. Moreover, the final outcome of a reform often depends critically on the effectiveness of the processes of implementation of the adopted normative acts.

Since the end of 2014, VoxUkraine, together with independent experts, has been tracking changes in the regulatory environment and calculating iMoRe – the index for monitoring of reforms – the values of which can range between -5 (substantial rollback of reforms) to +5 (substantial progress in reforms).

Reforms in the country have been advancing slowly during the first year of work of both governments – Groysman’s team and Yatsenyuk’s team No. 2 (Diagram 1). The iMoRe index has never been negative, which means that legislative changes conducive to the progress of reforms have been taking place all along.

Diagram 1. iMoRe during the first year of the governments operation 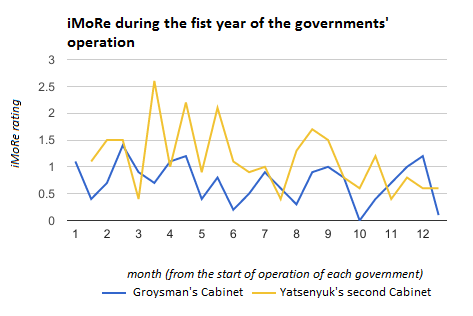 In general, according to iMoRe experts, the progress of reforms during the period of work of Groysman’s team was slower compared to the times of Yatsenyuk’s second team; however, the conditions under which the two governments operated were also different.

When Yatsenuyk’s second government was in office, the economy was negatively affected by the military conflict in the east of the country and declining prices for Ukrainian exports. All government bodies were focused on obtaining funding from the IMF and other Western creditors in exchange for conducting important reforms.

In 2016, when Groysman’s government was sworn in office, the economy stabilized and funding from foreign creditors became a less urgent issue. At the same time, there was an increase in populist sentiments in the Parliament as well as rising resistance on the part of the oligarchs; this had a negative impact on the pace of adoption of legislative acts as well as on their quality. Furthermore, there was a decrease in the number of quick wins, i.e. reforms not requiring substantial effort. Overall, the focus has been gradually shifting towards implementation of previously adopted laws –  an important process critical for the outcome but lying beyond the scope of iMoRe project.

Still, we can draw certain conclusions about the government’s legislation-changing activity. These conclusions are not a comprehensive assessment of the governments’ reformist achievements; yet they provide a basis for a broader analysis.

Both governments were more active in initiating reforms, compared to the other public agencies. During the first year of Yatsenyuk’s government No. 2, the Cabinet of Ministers of Ukraine (CMU) initiated nearly two thirds of normative acts pertaining to reform in economic and related spheres. The National Bank of Ukraine (20%) and the People’s Deputies of Ukraine were in the second and third place, respectively. Groysman’s government initiated more than half of all the reformist normative acts adopted in the country during the first year of its operation. The NBU and the Parliament were again in the second and third places (23% and 17%, respectively). 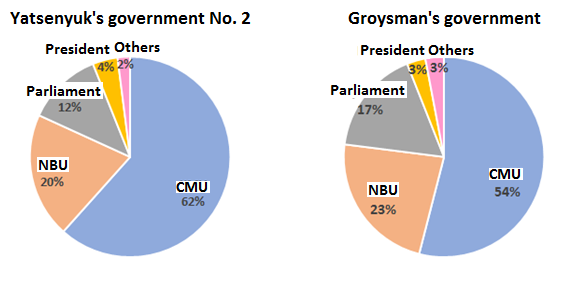 * Government initiatives include CMU resolutions and ordinances as well as CMU-initiated draft laws approved by the Parliament and signed by the President.
** The number of reformist normative acts was estimated on the basis of iMoRe data.

As regards areas of reforms the legislative initiatives of Yatsenyuk’s second government had a substantial impact on decreasing opportunities for corruption and on deregulating the business environment. Moreover, a reform of the natural gas market was initiated, promoting the country’s energy independence. 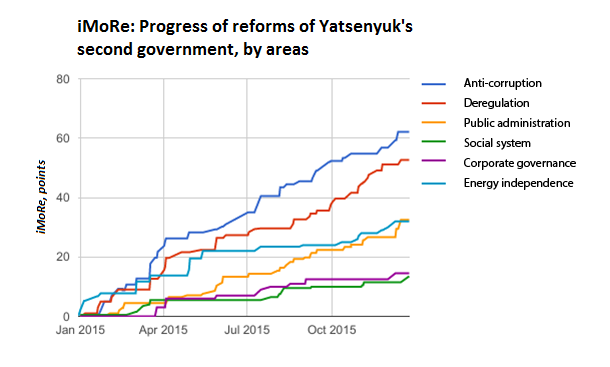 * Progress is determined as the sum of points for government-initiated normative acts that influenced the respective area. The diagram shows areas in which the highest progress was achieved.
** The social protection system includes inter alia the health care system.

The most important normative acts that were initiated by ministers headed by Yatsenyuk for reducing the opportunities for corruption include transfer of public procurement of medicines to international organizations, opening of more than 300 state registers and datasets, elimination of the monopoly of the State Enterprise Ukrecoresursy, and disclosure of information on purchases made by enterprises subordinated to the Ministry of Infrastructure. In the sphere of deregulation, these are the law “On Deregulation,” which simplified, in accordance with EU standards, the authorization and coordination procedures for business and decreased the influence of state agencies on economic agents; the law introducing the tacit acceptance procedure during the registration of a taxpayer; the cancellation of mandatory certification of a number of products and fuel, etc. In the energy sector, the important initiatives include the first stage of raising the gas tariffs for the population to import parity, the law on the natural gas market, the lifting of the moratorium on selling Naftogaz debtors’ property, and the resolution on reforming the corporate management of the NJSC Naftogaz.

Groysman’s government continued efforts of its predecessor aimed at reducing regulatory pressure on business and reforming the energy sector. In addition, first steps were taken in healthcare reform.

* Progress is determined as the sum of points for government-initiated normative acts that influenced the respective area. The diagram shows areas in which the highest progress was achieved.
** The social protection system includes inter alia the health care system.

To improve business environment, Groysman’s government initiated changes to Ukraine’s Tax Code that introduce Unified Public Register for VAT Refund  and provide for the liquidation of the (repressive) tax militia. Also, the procedure for the operation of the single window system at customs was approved; the procedure for submitting electronic documents to licensing bodies was clarified, etc. The main events in the energy sector reform include the second stage of raising the gas prices to import parity and approval of the NJSC Naftogaz restructuring plan. In healthcare sector, the Accessible Medications Program has been launched and the procedure for refunding the cost of medications and for granting subventions to local budgets for such refunding has been specified.

Table 1. The most important reformist normative acts initiated by Ukraine’s governments in their first year in office and their iMoRe scores

At the same time, a number of important spheres remained outside the area of interest of both teams. These include pension and land reforms, reform of education and full-scale renewal of civil service. Also, health care reform has only just begun and there has been no essential progress in the sphere of privatization. PM Groysman referred to some of these reforms as the government’s priorities in 2017. Hopefully, they will move forward, despite increasing resistance from interested parties and approaching 2019 elections.