Is this sustained spurt in economic growth a likely outcome? This post gives a statistical perspective on this question. 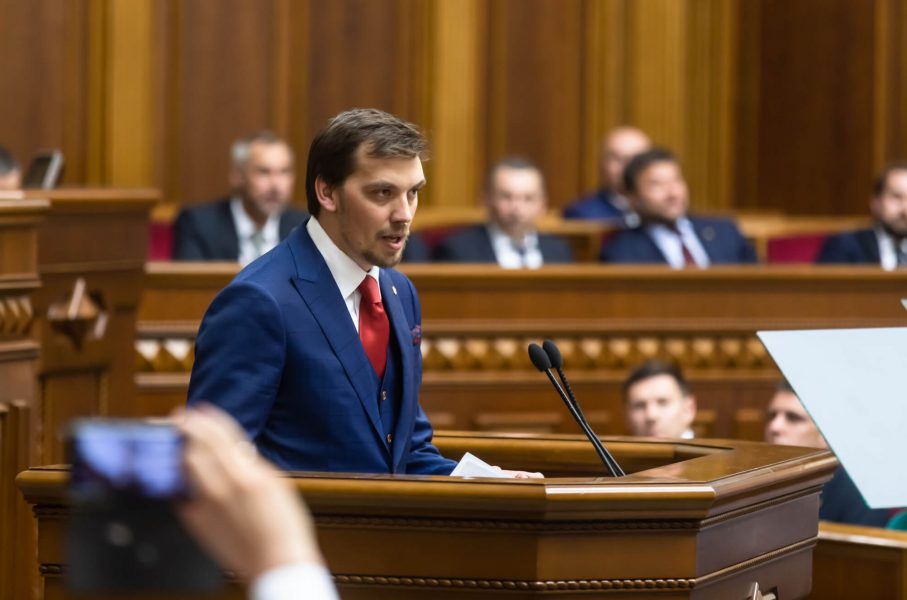 Oleksiy Honcharuk, the Prime Minister of Ukraine, declared an ambitious goal for Ukraine: the economy should grow 40% over the next five years (approximately 7% per year). Ukraine’s President Volodymyr Zelenskyy is equally optimistic and believes that the economy is on the verge of a breakthrough. We all want the Ukrainian economy to grow fast, a critical condition for the success of the Ukrainian state. And we all agree that the Ukrainian economy has the potential to grow fast. But is this sustained spurt in economic growth a likely outcome? This post gives a statistical perspective on this question.

To appreciate the range of historical possibilities for economic growth, we use Penn World Tables, a key source for economic comparisons across time and countries. This source provides measures of growth domestic product (GDP), population, human capital, and many other statistics important for analyzing economic growth. Before we proceed, we should be clear about two technical issues. First, although the public discussion is centered on the growth rate of GDP, the relevant measure of economic progress is the growth rate of GDP per person because this measure of growth means higher welfare. For Ukraine, this distinction does not make a material difference because population is shrinking but this is not the case for other countries or times. So if we want a fair comparison that is meaningful for welfare, we should use growth rates of GDP per person. Second, growth rates over multiple years are compounding, that is, 7% growth rate over five years is more than 5×7%=35% because 7% in the second year builds on 7% growth in the first year, 7% in the third year builds on 7% in the first and second years, etc. As a result, it is conventional to use log growth rates which can be added.

Figure 1 demonstrates the historical distribution of 5-year growth rates, that is, the growth rate of output from a given year to five years later. This figure shows that 40% growth is possible. If we take an average across times and countries, an “average” economy can grow more than 40% with a (roughly) 7% chance. This is not a high chance, but it is not impossible. Furthermore, one may argue that the “average” economy is not a good benchmark for comparisons for Ukraine because Ukraine is a currently poor country but with a lot of potential and so comparing with Germany or Japan is not fair. 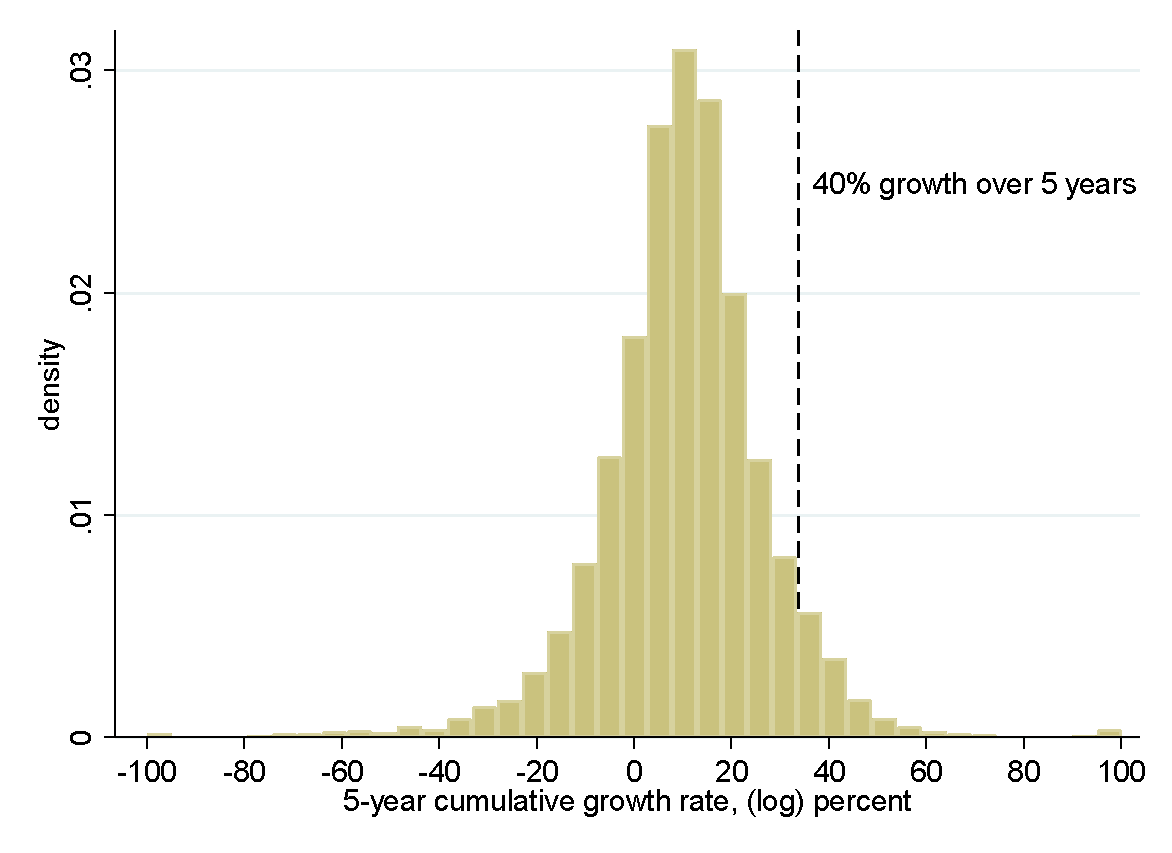 To have a better benchmark, let us consider the growth path for Ukraine, its neighbors, and China. Figure 2 shows that Ukraine and a few other countries are actually in the lucky club of countries that grew more than 40% over 5 years at some point. Furthermore, Ukraine grew faster than China at some point! Hence, Ukraine can in principle grow fast but before we announce a victory, we should have a more careful look at this figure. Ukraine, Russia, Belarus, and (to some extent) China exhibited astonishing growth in early 2000s before the Great Recession. This growth in unison is not a coincidence. This was the time when nearly all emerging economies grew fast and this growth is often attributed to the boom in commodity prices. For example, Ukraine benefited from high prices for steel and Russia enjoyed high prices for oil. This was also the time the global economic cycle was in a strong expansion mode.  Growing fast in these conditions is much easier than growing fast now when many economists and policy institutions sense a high risk of a global recession. 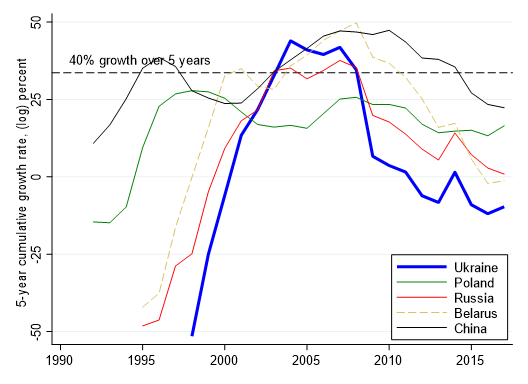 Can we correct for these global factors to see a more realistic scenario for 40% growth? Here’s one way to implement this correction. First, we regress a country’s output growth rate on commodity prices and measures of global economic growth. Second, we use the residual from this regression as a measure of economic growth adjusted for these global factors. Figure 3 shows the time series for adjusted growth. Note that without the push from global factors, all the economies in our analysis have much harder time hitting 40% growth over five years. Specifically, Ukraine’s adjusted growth is never above 40%. This means that historically Ukraine (and many other countries in the region) did not grow fast when the global economic conditions were not favorable. Hence, when the global environment is weak (as it is now), Ukraine faces higher hurdles for its 40% growth goal. Indeed, once we correct for global factors and focus on counties similar to Ukraine in terms of development, there is less than 2% chance that the average economy can grow 40% or more over 5 years. 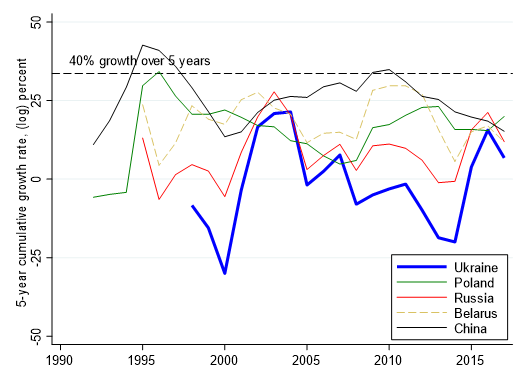 While these time series are quite illuminating, they do not tell the full story. High economic growth can be achieved by high growth of inputs into production such as labor and capital (extensive growth) or high growth rate of productivity (intensive growth). Research suggests that growth miracles like China were driven by massive increase in inputs and relatively modest gains in productivity. Hence, Ukraine cannot grow like China (or South Korea): it cannot reallocate people from villages to cities like China did, it already has a lot of infrastructure and capital relative to China in the 1980s or 1990s. Ukraine obviously has a long way to reach the level of capital in advanced economies and this is a possible growth point. But the main route is to raise productivity. 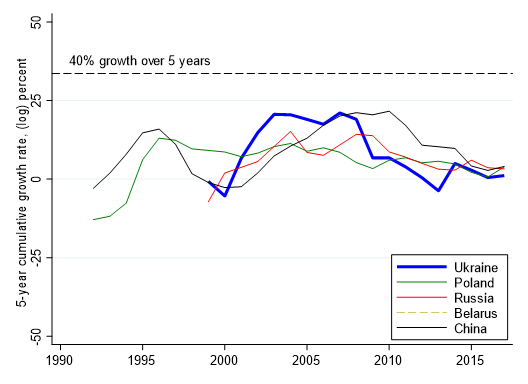 In summary, what does it take to create a growth miracle? This is a truly one-billion-dollar question. Economics does not have definitive recommendations that would guarantee a colossal growth spurt. If it were easy, we would not have poor countries.  But we know that government policies can help economic growth (protect property rights, fight populism, set up a market for land, decentralize decision making of the government, maintain macroeconomic stability and so on). A growth miracle can happen in Ukraine. But, unfortunately, the historical record is clear: it is not very likely to happen unless there is a radical change in how the Ukrainian economy is run or there is a global economic boom.