High Minimum Wage as a Driver into Self-Employment, Or The Ones Whose Salaries Have Increased | VoxUkraine

High Minimum Wage as a Driver into Self-Employment, Or The Ones Whose Salaries Have Increased

Over the past three years, the Government has provided for a more than threefold increase of the minimum wage. Ministers report that this has had a positive effect on the economy and the labor market. In reality, however, the resulting structural changes in the labor market have not yet been studied by anyone in Ukraine. But open source statistics reveal the strengthening of a dangerous trend: the private sector is in no hurry to raise non-minimum wages, whereas the incomes of self-employed entrepreneurs have been growing dynamically. Most likely, this is a consequence of the spreading practice of using self-employed entrepreneurs for labor remuneration, which means that hundreds of thousands of Ukrainians have been deprived of social protection.

Diagram 1. Minimum wage at the beginning of each year, in December 2017 prices. 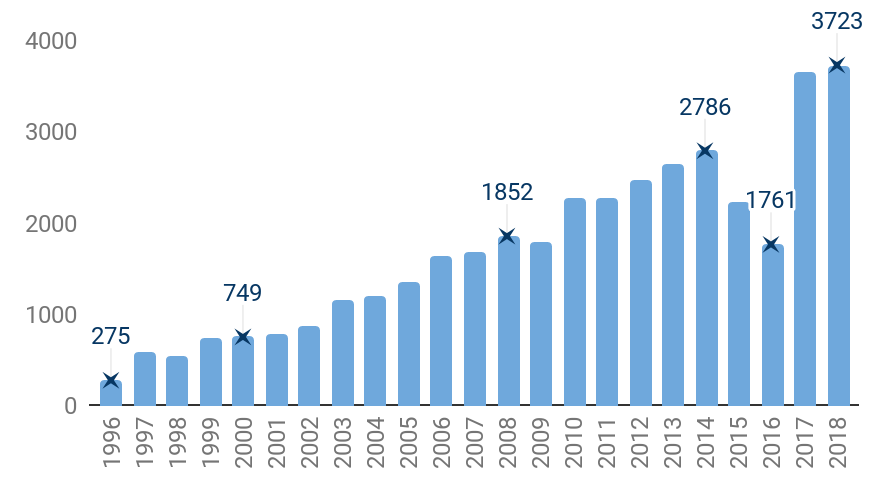 The growth rate of the minimum wage standards is much higher than the economic recovery rate (Diagram 2). In 2017, the Ukrainian GDP was 12% lower than in 2013. After its fall in 2014-2015, the subsequent 16% recovery over the next two years is rather slow (amounting, on the average, to a little over 2% annually).

Changes in minimum wage standards directly affect not only the low-paid workers. The relationship is more complicated and, according to the International Labor Organization, it impacts the overall level of salaries in the economy, leading to changes in formal and informal employment, labor productivity, etc.

Theoretically, business can respond to changes in the minimum wage in two ways: by making up for such an increase through optimization of employees or by introducing technologies allowing lower use of hired labor.

Empirical studies show that changes in the minimum wage do not always have a clear influence on unemployment. For example, based on analysis of data from the past 17 years, Business Insider claims that a rise in the minimum wage in Great Britain had no substantial impact on the level of employment. On the other hand, Nobel Laureate Gary Baker, who specialized in human capital research, argued that an increase in minimum salaries leads to lower employment of unskilled personnel.

Recent research by Jonathan Meer and Jeremy West showed that an increased minimum wage results in a reduction of the job creation rate. Remarkably, this effect is most noticeable for unskilled workers and young people entering the labor market for the first time. Jeffery Clemens also investigated the impact on these vulnerable groups and concluded that an increase in the minimum wage leads to a decrease in the number of jobs for unskilled workers 2 years later. He also found that companies are starting to use free labor on a wider scale. In particular, the number of jobs for young people is on the way down while the number of interns is on the way up.

An article by Oleksandr Zholud presents a generalization of research into minimum wages throughout the world. In particular it says that there are some controversial estimates of the impact of the minimum wage. Some say that if wages (the official salary) are increased in the protected sector, a part of those dismissed will switch to the alternative sector, thus reducing the level of wages for all those employed there. Empirically, this hypothesis was tested in a number of developing countries – they have a much larger informal sector compared to developed countries. Some papers attest to this particular effect, but other studies insist on an outcome that is opposite to the theoretical prediction: an increase in wages in the informal sector following the introduction of minimum salaries. The main explanation for this is the “lighthouse effect” – a situation when the known minimum wage is a benchmark for the employees which they think should determine the size of the salaries in the informal sector.

For Ukraine, these effects were analyzed by Oleksandra Betliy, who found that a rise in the standards of labor remuneration could cause employees’ switching to part-time employment, reduced working hours, an increase in the share of workers placed in unpaid administrative leave, etc.

There is, however, a reverse side to these achievements. The average wage level, allowing for inflation in the economy, has remained almost unchanged. Although the official average nominal wage in Ukraine increased from 3,265 to 6,953 UAH in the period between 2013 and 2017 (as of November 2017), all of that increase was “eaten up” by inflation (Diagram 3). But the minimum wage, even with consideration for inflation, grew by 47% (Diagram 1). This means that the average wage of those receiving higher-than-minimum salaries was growing more slowly than the prices and eventually decreased in real terms. 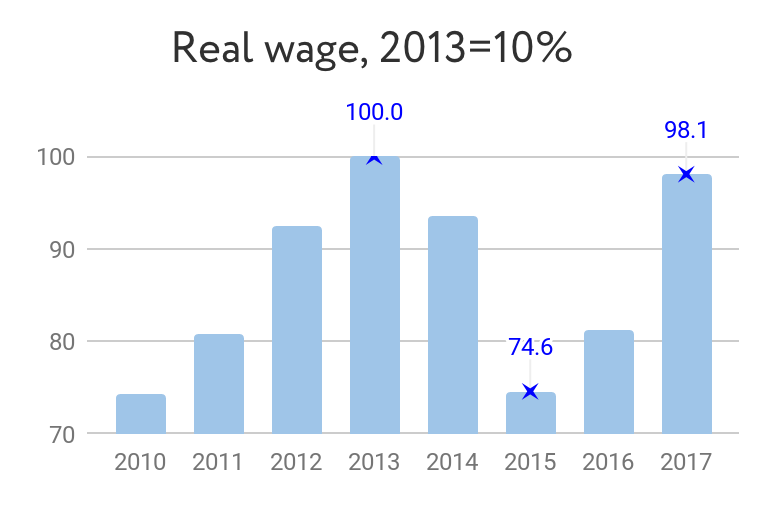 No research has been done yet to find out what changes in the structure of employment have been brought about by the radical increase in the minimum wage. Moreover, there are in fact no comprehensive data reflecting the structure of the labor market. To see where nearly 16.5 million Ukrainians are employed, VoxUkraine made calculations based on data concerning the economic activity of the population, the labor market, performance indicators of economic entities, 100 largest state companies and state banks (Diagram 4). Based on these data, we can analyze how decisions on the minimum wage affect different segments of the market.

Diagram 4. Structure of the labor market in Ukraine based on 2016 figures.

* The segment of private enterprises includes employees of joint-stock companies except those owned by the state, limited liability companies, and private enterprises; public sector employees are employees of state or local self-government agencies, state and communal organizations and institutions; state companies are state and communal enterprises, joint-stock companies owned by the state, including state-owned banks. Employees officially hired by an enterprise or by a self-employed entrepreneur and receiving a part of the wage “in an envelope” are assigned to the segment in which they are officially registered.

The decision to raise the minimum wage directly affects state sector employees – at the end 2016, they accounted for almost one-third of all those employed: 30.5% work at government agencies, public institutions, state or communally owned enterprises (Diagram 4). In this segment, employees are officially registered and provided with a social security package. Implementation of the decision to change the terms of remuneration for the public sector (“budgeted”) employees (18.6% of the entire employed labor force) only means a redistribution of budget funds. For state-owned companies (11.9%), the implementation of such a decision might become a trigger for some changes in the organizational structure of the enterprise.

The size of the private sector (43.4%) is somewhat larger than that of the state. However, the number of official private sector employees (34.6%) receiving their officially declared (“white”) salary and enjoying social guarantees (officially employed persons) is comparable to the state sector figure.

The private sector responds more promptly and “logically” to economic circumstances (in this case, to the minimum wage increase) – and this trend is rather dangerous. To save on taxes and provide for greater flexibility in relations with employees, companies pay wages “in envelopes” or conclude contracts with employees as private (self-employed) entrepreneurs (“FOPs”). This is not only, or merely, a matter of missing tax revenues. A bigger problem is that such employees have no social guarantees either for their future pension or for sick leave or vacation payment.

Most frequently, business entities use self-employed entrepreneurs belonging to the category of third group single tax payers. In such case, the amount of taxes to be paid to the state is much smaller. For example, in 2017 an enterprise wishing to pay a net wage of 10,000 UAH (“handed-over amount”) to its employee with the “self-employed” status had to transfer a total of 1,267 UAH (13%) to the state budget and the social insurance funds; in case of a hired employee, 5,200 UAH (52%). This clearly shows which option is advantageous to business – on account of much lower cost of hired labor.

No government agency has tried to estimate what part of those having the “FOP” status are really entrepreneurs and what part consists of hired employees. It is obvious, however, that the latter already account for a considerable share of the labor market. According to data from the State Statistics Service, in 2014-2016 the total number of self-employed entrepreneurs was more than three million. Despite the absence of social guarantees, hired workers are increasingly ready to work “on FOP terms.”

To this we should also add the shadow sector – employees who are not registered at all while receiving “envelope salaries” or who conduct entrepreneurial activities while not being officially registered as self-employed entrepreneurs (26.2%). It is obvious that in this case the employees have no social guarantees at all. There are also other situations to be taken into account – when a person officially receives the minimum wage only, but is paid an extra amount “in an envelope” (Diagram 4).

In statistics concerning the population’s revenues, the incomes of self-employed employees are presented in the section “gross profit, mixed income.” This indicator shows a steady growth trend (Diagram 5). According to preliminary estimates, in 2017 the average annual income of self-employed entrepreneurs (both formally and informally employed) was about 160,000 – 170,000 UAH. Allowing for inflation, this figure is almost a quarter higher than that for 2013.

Self-employed entrepreneurs managed to adapt to crisis conditions much faster than hired workers did. Their real revenues (allowing for inflation) decreased only in 2015; in subsequent years, a restoration of their income level began. 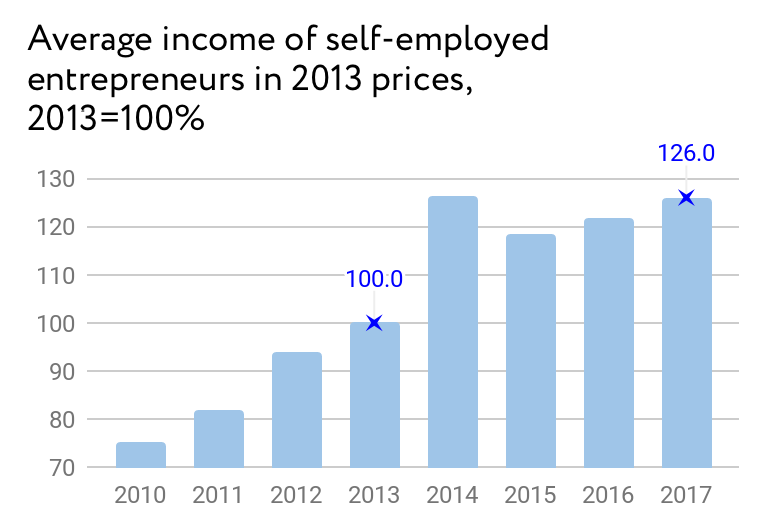 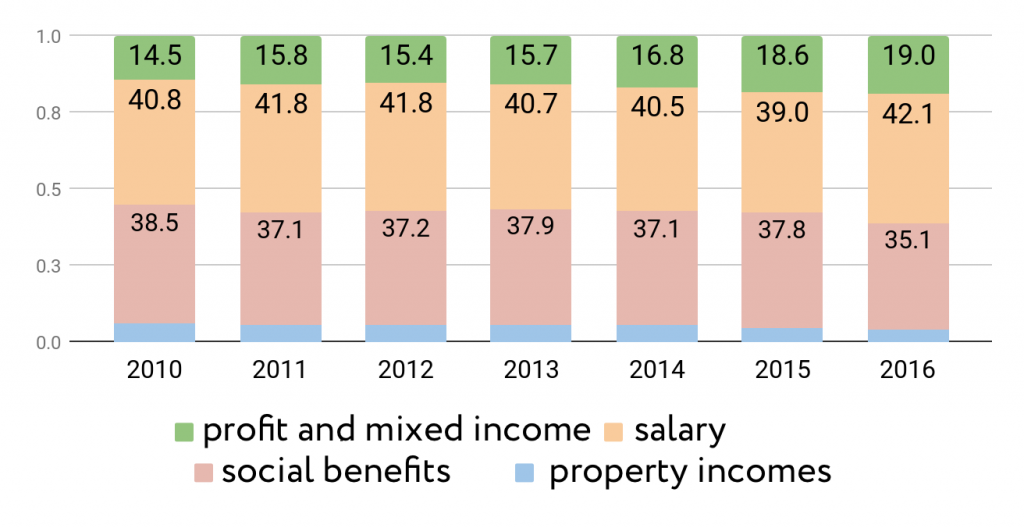 The historically shaped structure of the labor market in Ukraine can no longer be ignored. When making decisions, Government officials should take into account that the work of the private sector is subject to the real laws of economics. And so, its response to a change in the minimum wage is fundamentally different from that of the state sector, where everything comes down to redistribution of budget funds. Private business is trying to optimize its spending, so as to survive under crisis conditions and remain competitive. Therefore, more stringent conditions for remuneration of officially employed staff are pushing business towards using self-employed entrepreneurs or paying “envelope salaries.” For Ukrainians, this means that, on the labor market, the number of jobs providing for social guarantees will continue to decrease.

When many companies are using self-employed entrepreneurs and “envelope” salaries, this actually leads to “a bad status quo” on the market. Such schemes allow those using them to considerably reduce prime cost. Other things being equal, the rest of the companies – those officially employing their staff – will face a much higher prime cost level. Therefore, they will lose competition to those who optimize own expenses by resorting to “FOPs” and “envelopes.” Accordingly, in order not to lose competition, companies will increasingly switch to using persons with the status of self-employed entrepreneur.

It is unlikely that this problem can be resolved by means of audits and labor protection inspections, since the cost and the administrative burden of intense auditing will be unjustified and corruption risks will be quite high.

In 2019, the presidential and parliamentary elections will be held and the election campaigns have already begun. Elections have almost always been preceded by a rise in the standard of wages. This is not surprising, since such decisions are advantageous to state sector employees, which account for nearly one-third of the labor market.

We want the authorities’ next decision to change wage standards to be based on an analysis of the costs and benefits of the private sector as well and to be developed with the understanding that an economically unjustified increase may “push” millions of Ukrainians beyond the labor market area where social guarantees are provided.