Tauria, Royal Scythia, the Peninsula of Gothia[1] more widely known as Crimea, is a hot topic these days. Who does it belong to? What should be its ultimate fate? Who are the indigenous Crimeans and does their opinion in all this matter? The most effective policies are those based on a sound understanding of an issue’s historical context. This article attempts to answer the question of whether Crimean socio-political, ethnic, cultural and historical ties are really with Russia or Western Ukraine.  It also explains how the answer to this question affects the discourse on the legality of claims over Crimean territory.

Crimea, the Peninsula’s name for more than a millennium, comes from a Turkic root for “stronghold” and is related to the words for protect/guard and fortress. According to popular legend it received its name following a coup d’etat, in which the Aq-Khazar Sabriel Bek, just decades before declaring Judaism his state religion in 861AD, seized control from the Qara-Khazar Kaghan in a Donbas civil war apparently precipitated by Omurtag and kopan Okorsis. The Qara-Khazar “rebels” (Turkic: Khavar) including Magyars and probably Pechenegs retreated from Eastern Azovia while their Kaghan’s “Caraimean” forces fled west across the Kerch strait from the Taman Peninsula into the Hun “stronghold” and became the first “Crimeans” re-grouping to secure the Dnipro Basin.

Leaving the Aq-Khazars, the Qara-Khazars (Khavars) secured themselves in Crimea and around Kopyriv kinets on the Dnipro. Kyiv would become the direct continuation of the Dnipro Khavar State[2]. Meanwhile, the Volga basin polity of the Aq-Khazars’ state, would eventually become the basis of the Moscow state – research on which has been suppressed since it does not align with ‘classical’ doctrine. The Donbas became a buffer-zone between the two.

Editors’ note: We do not have professional historians among our editors, thus we cannot fully endorse all the facts outlined in the article. However, we think that the ideas presented here are interesting and worthy of publication.

After quitting Taman, the Khavars (either rebels or friends depending the political or religious definitions) survived in the area of Crimea and modern Ukraine beyond the dominance of the Aq-Khazars. The relationship between the Judaized Aq-Khazars of the Volga Basin and Judeo-”Chrislamic” Qara-Khazar Khavars of the Dnipro Basin and their mutual struggle over the Donbas would seem to be the tribal basis for centuries of struggle between Moscow and Kiev to this day. 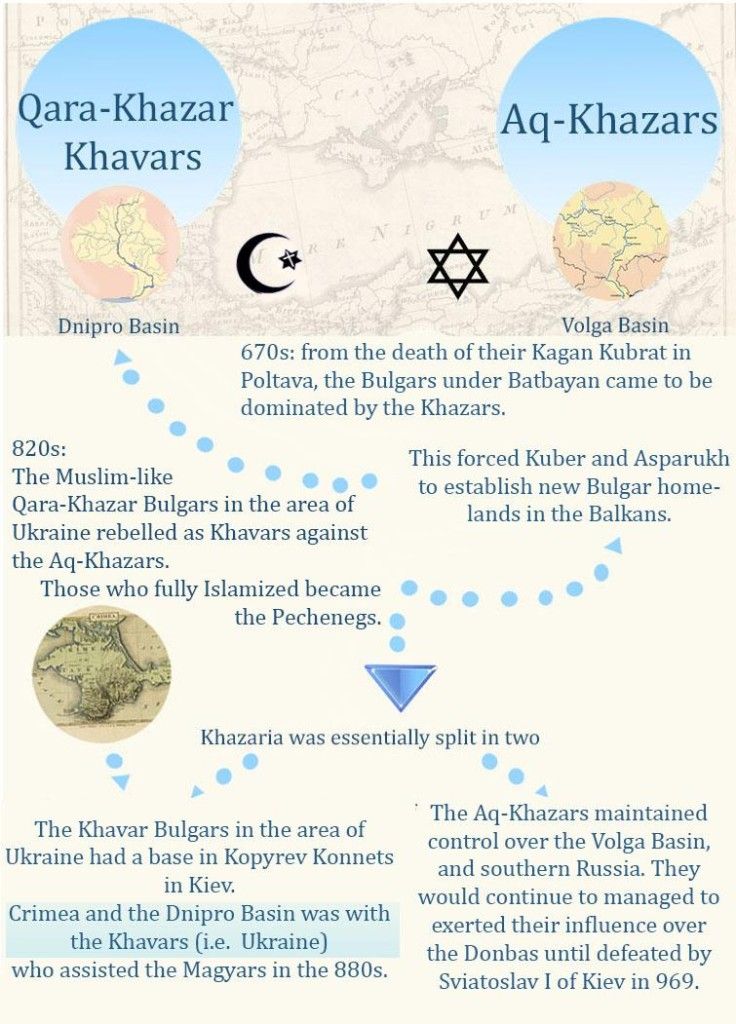 Following Khazaria’s demise, Qara-Khazar Kahan Georgius Tzul’s Crimean  “Hun Kingdom” of Polovtsi eventually became Cumania (1061), which extended far beyond the Peninsula when it was taken by Tatars under the leadership of Batu and Mongke Khan in the 13th century. In 1428 it became independent under the original Molokan-Subbotniks, the Karaits (Qara-Tatars / Karaylar / Girays), who had always played an important role in Mongol politics[3]. With similar origins to the Khavars, soon the linguistically dominant, Church of the East Karait-Tatars became “Karaimstvuiuschie” (or Molokan Karaits), and with them the Peninsula remained. 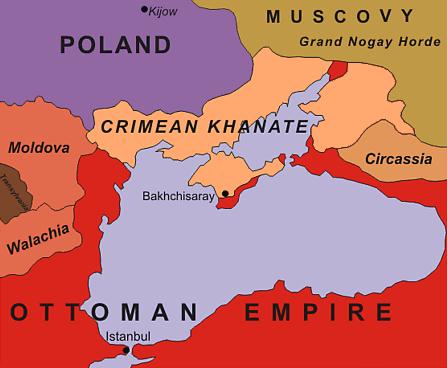 Just like their Khazar predecessors, the Karaimits continued to lose members to Judaism, evolving as Jufut-Crimchakhs (Karait Jews) under the influence of the Genoese Ghisolfis’ “Gazaria” while still allied to the Genghisids, then Poland-Lithuania from 1428, then the Ottomans from 1475. One such notable Judaizer was Isaac Troki who influenced the Haskalah movement. Meanwhile, Crimea’s ruling dynasty of Karaits (Ottoman Turkish: كرايلر / Karaylar often called “Girays”‎) was drawn closer to mainstream Ottoman Islam. As an Ottoman Protectorate, the area of south Ukraine became the Crimean Kahanate surviving between Poland and Muscovy fully independent from the Grand Nogay Horde.

Tsarina Catherine only captured Crimea in 1784 at which point the Molokan Karait-Tatar Church of Molokan Karaits (such as the would-be Maskil Avraham Firkovich) adopted the name of the Ananite-Hanafi Caraims (such as Sima Babovich) whom they defended as non-Jews and harboured among themselves from the authorities. Although Seraya Shapshal found this trick helpful again under the Nazis[4], it was useless against the Bolsheviks. Two centuries of Molokan Karaits among Jews who renamed their Synagogues as “Kenesa”[5] seeking rights that “Caraims” enjoyed has also left its indelible mark on the community still recognized by the Ancient Church of the East nonetheless.

In December 1917 the short-lived Crimean People’s Republic was declared by the initiative of the Qurultay of Crimean Tatars.  However, it was quickly defeated by Bolsheviks in early 1918, who then were pushed out of the peninsula by the Ukrainian People’s Republic with help from the Germans. It was an autonomous region under the Ukrainian State during the Hetmanat period in 1918 (de facto the peninsula was ruled by the Crimean Regional Government that negotiated federation with Ukraine) and was returned to Ukraine in 1954 before being annexed by Russia last year.

Sixty-one to sixty five years under Ukrainian governance might not seem like much to quibble over, except that it is clear Crimea’s ties to the Ukrainian homeland throughout history are indisputable.

Significant cultural and ethnic ties to West Ukraine (Halychyna) throughout the centuries are demonstrated recently for example by the fact that the priceless Tabernacle altar-piece (Qehal) of the Caraimean Karait Chapel (Kenesa) in Halych was removed to the small Chapel of the Caraimean Cathederal in Evpatoria by Caraimean Karaits in an attempt to preserve the endangered Caraimean heritage of West Ukraine. Further back in time, from the 890sAD, the “rebellious” Qara-Khazars of Crimea’s “Hun Kingdom” assisted the Magyars in Carpathian-Ruthenia to subdue the lands between the Slovaks and Balkan Bulgarians[6]. Later, 100 families of the original Molokan Karaits were settled in Halychyna (specifically Lviv) by hostage arrangement between Daniel of Galicia and Batu Khan in 1246AD. It was the Karaits in the area of West Ukraine and Trakai who enlisted Lithuania’s support in establishing the Crimean Khanate under Hacı Melek I’s Karait dynasty. Even while separated in Austrian and Russian Empires, the “Crimeans” of Halychyna and Crimea respectively – and even and far away as Lithuania  – operated as one undivided nation governed primarily by the Caraimean Spiritual Board of Tauria and Odesa. These days, still practicing Torah based religion combined with age-old belief in Christ and Muhammad[7], the vast majority of “Caraims” are Slavic-speaking Ukrainans but they, unlike other Ukrainians, have not forgotten Bulgar-Hun origins.

Kenasas in Halych (left), Kyiv (in the middle), and Lutsk (right).

In light of all this, it is therefore no wonder that Russia decided not to acknowledge the continued existence of Caraims as an ethnicity distinguished from Russian Jews.[8] Indeed the Soviets had deported them from West Ukraine to Archangelsk and Vorkuta, and the Crimean Tatars to Khazakhstan under Stalin. Nevertheless, the common origins with the Ukrainians around Poltava, Kubrat’s seat in Old Bulgaria, began long before the Kyivan Rus’ existed. Ukrainians might benefit from better education on the pre-Slavonic semi-nomadic broadly-religious peoples we descend from.  It is also important to promote this heritage to others who doubt our Nation’s claim to Crimea is based on anything more than 60-something years of administration.

There are substantial ethnic-cultural and socio-historical ties between Crimea and West Ukraine. Only in the 8th, 14th and 19th centuries did government come from the Volga. The origin of Ukraine’s Cossack[9] forerunners, the blond-haired, fair-skinned blue-eyed Polovtsi who fell-out with Kyiv for 175 years, which can not yet certainly be determined, is not unlikely Sarmatian/Qara-Khazar[10], but certainly not from Moscovy. Crimea’s Tatars of the 15th and of this century campaigned for support from the west. Therefore, claims that this territory historically belongs to the Russian Federation are based on a devastating double standard. If this area should be in Russia because of recent Russian immigrants[11], then Luton should belong to Bangladesh. If the argument is that annexation to Russia reflects the will of the population, then Japanese areas of Russia should belong to Japan, and perhaps Kalmykia and Buryatia should belong to Mongolia. Would Russia understand Ukraine’s distress better if perhaps Orenburg Oblast was forced into a referendum on joining Kazakhstan by seeing what that could kick-off in Bashkortostan and Tatarstan?

In retrospect, the history of the Taurian Peninsula demonstrates stronger ties between the territory and population of modern Ukraine and Crimea than Crimea and the territory of modern Russia. Therefore, Russian claims concerning “shared history” and “inseparability” of Crimea as “a part of Russia” may not serve as a sole justification for the brutal takeover.

[1] Ashkenaz, the Hebrew word for Gothia, derives from the Semitic word for Scythia.

[3] Douglas Morton Dunlop, “The Karaits of East Asia”, in Bulletin of the School of Oriental and African Studies, University of London, 1944.

[5] from the Aramaic, Arabic and Persian words for Church or Chapel

[6] The Alsószentmihály inscription is a trace of the Khavar Kara-Khazars’ presence in a Carpathian Magyar area.

[9] The word Cossack is derived from the Polovtsian word for “free-wanderer” Kazakh Encyclopedia of the Stateless Nations: S-Z by James Minahan page 1966

[10] According to Caraimean tradition recorded by Firkovich, the Caraims and Khazars were “half-Scythian” Sarmatians descended from the lost “Ten Tribes”.