How Many People Lost Their Jobs Due to Quarantine? | VoxUkraine

How Many People Lost Their Jobs Due to Quarantine?

First of all, we can analyze the data of Business expectations of Ukrainian enterprises for the Q1 2020 that the NBU has recently published. Please note that the survey was conducted prior to the introduction of quarantine measures (it ended on March 4). Still, the survey results contain some interesting facts about labor market prospects. Estimates for all  the components of business expectations except for the number of employees are positive.

Disclaimer. Written within the Kyiv School of Economics and VoxUkraine “Virus Economy” project — a series of research papers analyzing the impact of COVID-19 pandemics and global turbulence on the economy and social life in Ukraine.

However, the number of employees is expected to decline. The turning point was the end of 2019: by the Q4 the balance of responses about the expected number of employees was positive for a long time, and in the Q4 became negative for the first time. This trend continued in the Q1 of 2020 despite positive expectations about the financial and economic situation. We tend to associate the expectations of the reduction of the number of employees with the forecast slowdown (only slowdown at the time!) of the global economy due to the Covid-19 pandemic that began to unfold in late January. 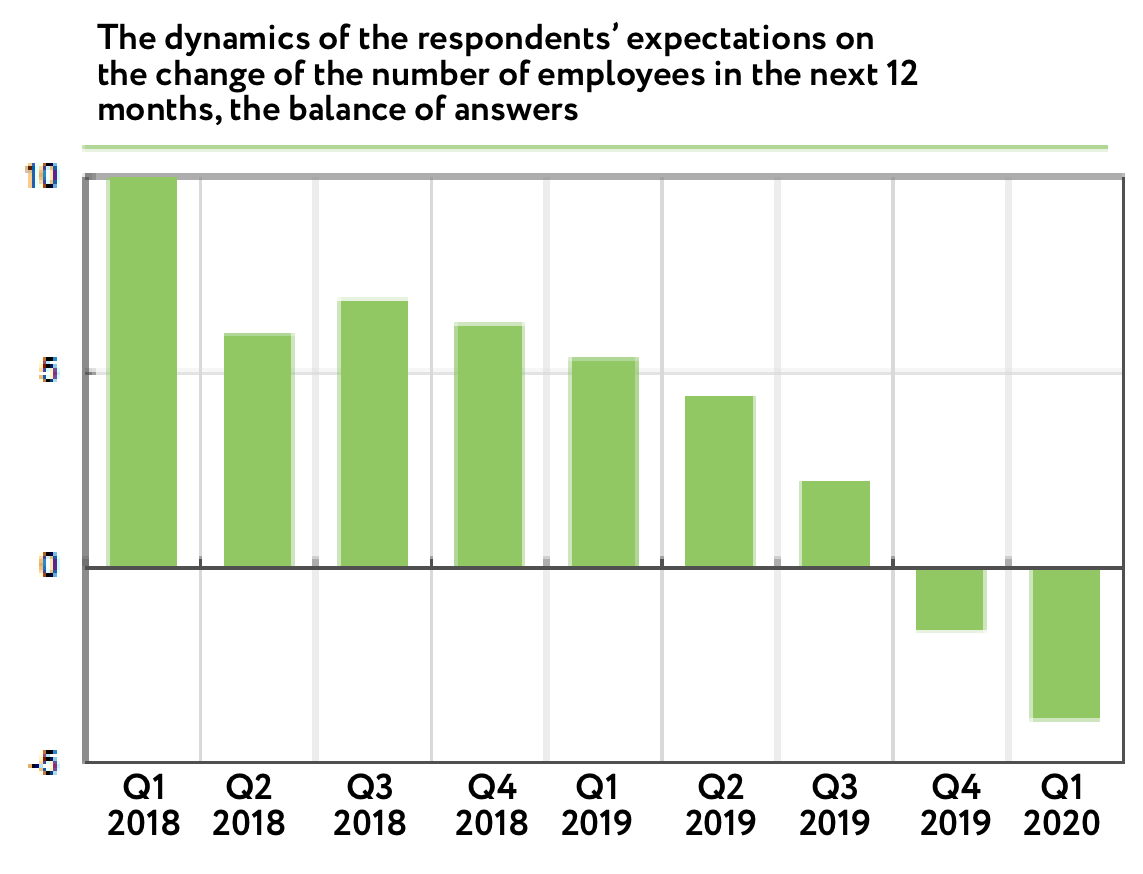 Even though the forecasts of a global economic slowdown were only starting to appear, it is likely that export-oriented companies have already started adjusting their plans: the most notable reduction in employment plans is among enterprises that only export (followed by the ones that both export and import).

However, with the introduction of quarantine and the onset of the global recession, estimates of the business activity index have largely lost their relevance, so since the end of March the NBU began conducting weekly surveys of executives of large and medium-sized enterprises (the results are published within the Weekly Economic Review). In particular, the responses received between April 13-15 indicate a worsening employment situation. Growth is expected only in agriculture, largely due to seasonality, and partly due to the fact that this industry will be less affected by the recession. However, even for agriculture the balance of expectations has been worsening from week to week. According to the National Bank analysts, the enterprises of trade, processing industry, medium-sized enterprises and importers have the most pessimistic outlook.

The NBU Weekly Economic Review also provides us with up-to-date information on the labor market from two alternative sources. The first source is the State Employment Service (SES), which noted a steady increase in the number of registered unemployed persons. In mid-April 2020, the number of unemployed persons increased by 22% over the previous year. From March 12 to April 9, 58,000 new unemployed registered with SES. However, such an increase may also be caused by an increase in unemployment benefits and simplification of the procedure for obtaining unemployment status. The second source is the work.ua website, where the number of new vacancies has dropped by half. By the way, the number of new resumes has also initially dropped, and in recent weeks has remained virtually unchanged. This implies that the job market has faded on both sides: now is not the best time to look for a job. Thus, the indirect labor market data unanimously prove that the situation is worsening.

In order to give a more accurate estimate of the possible increase in unemployment in Ukraine, we suggest looking at the structure of the employed population by type of economic activity. Such statistics for all employed and the economy as a whole are available only for 2018 so far, but we have no reason to expect that the employment structure over the last year has changed significantly. Quarantine restrictions have had the greatest impact on the activities of restaurants, hotels and tourism, culture and entertainment, sports and leisure. If you look at the structure of employees in the relevant industries, highlighting the most vulnerable, it is:

The total employment in these spheres is 1044 thousand people. 1 million people work in the areas most affected by the quarantine. Informally employed are at the highest risk. They are the first candidates for dismissal because they are not protected by labor law and can only rely on personal arrangements with employers.

The share of informally employed in Ukraine is quite high. According to official data, there were 3.5 million of informally employed out of 16.6 million employed, i.e. 21%, in 2019. This figure is in line with the recent estimate of Info Sapiens survey made in February 2020: 24% of employed Ukrainians work in the shadow (and another 11% get some part of their salaries “in envelopes”). The takeaway is the same: these workers are not protected by law, including in quarantine situations. If you count all the informally employed in the service sector, it is 35% of the 3.5 million people. — 1.2 million people. The President of the Chamber of Commerce of Ukraine provided a very similar assessment — according to CCU estimates, about 1 million people lost their jobs during the quarantine.

We can also provide an alternative estimate of the increase in the number of unemployed based on the sociological surveys conducted in recent weeks by various agencies. The table below presents the results of a few of them.

We see the share of people who responded that they lost their jobs ranges from 5 to 10%. However, since the figures on the share of those who lost part of their income since the introduction of quarantine vary widely, we can assume that different the formulation of questions led to quite different results.

By the end of 2019, there were about 1.5 million unemployed in Ukraine (according to the methodology of the International Labor Organization), so today this number can reach 2.5-2.7 million. If we consider that the people who lost their jobs recently remain among the economically active (that is, they do not stop looking for a job due to such factors as, for example, the lack of transport to reach it), the unemployment rate can reach 13.7-14.8%. If some people who lost their jobs formally join the ranks of the economically inactive, then the unemployment rate may be lower. But such a situation implies hidden unemployment.

One way or another, this is the highest level of unemployment in the last 20 years. The situation will change for the better as the quarantine measures weaken. But a significant recovery in employment can happen only after their complete cancellation. However, this recovery is not likely to be complete until the global economy returns to its before-the-pandemic state, which is unlikely to happen any time soon.