How Ukrainians feel in wartime

How Ukrainians feel in wartime

In March, almost a month after the beginning of the war, sociological company Factum Group conducted an online survey of Ukrainians. It showed that despite the decreasing of the opportunity to work at full strength, to have the full-fledged leisure and habitual life, social well-being of Ukrainians has improved. Further we tell about it in more details.

One of the reasons for the improvement of life perception may be the fact that the war has led to the essential rethinking of the values Ukrainians have and encouraged them to appreciate more what they have. And it also reduced the level of expectations concerning meeting of their needs.

More about the methodology of poll YOUkrayina.

Figure 1. Indicators, forming the general index of the well-being of Ukrainians 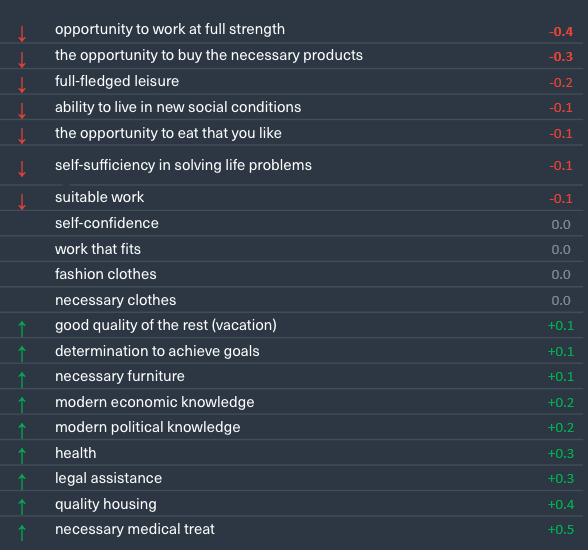 Note: Specified changes of the indicator as of March 2022 compared to 2021. Statistically significant changes are marked ↑ ↓

Among those indicators of the index of the social well-being, which decreased in March 2022 compared to 2021 (Fig. 1), there are needs related to the professional realization, the opportunity to buy the necessary products, have leisure and ability to adapt to the new reality, which are extremely distinguished. In particular, the opportunities to work at full capacity, to have additional earnings, and to buy the most necessary products got worse. This is not surprising, because 70% of respondents polled in March 2022 noted that in comparison with the pre-war period their involvement in work decreased and only 8% of respondents noted that it increased. It is more related to the people from the cities with population more than 1 mln inhabitants that have changed the place of residence because of the war, and to the women.

The feeling of cohesion increases substantially — more than twice in comparison with the last year (when the Ukrainians were affected with the coronavirus pandemic), in March 2022. We can assume that precisely the feeling of cohesion provided Ukrainians with the maintenance of the emotional resilience and optimism the same that was in the prewar period. And it is completely possible that precisely cohesion in the most difficult time for the country is the magic code of the Ukrainian nation, providing Ukrainians with strength and inviolability. It could be observed in 2014 and in 2004-2005. Hence (do you remember?) “We are a huge force together, and we can not be overcome.” (“Greenjolly”`s song “Razom Nas Bahato”, Eurovision Song Contest: Kyiv 2005 – ed.)

Figure 2. Indicators of the emotional state of Ukrainians

Note: The emotional stability — lack of panic moods; optimism — belief in positive changes in during the next six months, cohesion — a feeling of unity with the people. The value of the metrics is in the range from 0 to 10, where 10 is the maximum value.

This cohesion is manifested in the joint efforts against Russian aggression: 46% of respondents help with resources to defenders of our state, 43% — participate in information struggle, 41% — help citizens, 6% — defend the state with weapons in hand.

Figure 3. Indicators of the self-evaluation of the awareness

Note: The value of the metrics is in the range from 0 to 10, where 10 is the maximum value.

In March 2022, compared to March 2021, the rating of self-evaluation of Ukrainians awareness in the domain of economics, politics and the protection of health increased. This may be due to two factors.

First of all, 82% of respondents noted that compared to the pre-war period, they increased the time dedicated to watching / reading news. It happened at the expense of the reduction of entertainment content consumption, as 78% of respondents reported.

In 2020 a study conducted by the Democratic Foundation initiatives named after Ilko Kucheriv together with the sociological service of the Razumkov Center at the request of the NGO Detector Media, showed that for 23% of Ukrainians accounts their relatives and friends as the source of information. Probably, during the war this channel of receiving the information has become much more significant.

Determination and the future

With the beginning of the war despite the danger to life the readiness of Ukrainians to act, change their life, to help others, to be a volunteer and the desire to stay in Ukraine grew up to a significant measure.

Note: The value of the metrics is in the range from 0 to 10, where 10 is the maximum value.

According to the survey, 82% of respondents with the beginning of the military action remained at home or within the region, 16% — moved within Ukraine or abroad, 2% — did not answer the question. After the end of the war 19% of Ukrainians in the first place are planning to meet the family and friends, 11% — dream of returning home (a total of 37% of those who changed the place of residence, plan to return home after war in the first place), 10% will find a job and will work. So the mood of Ukrainians is quite optimistic, and the plans are various enough.