The first reforms from the Verkhovna Rada of 9th convocation are here. The main events of the round include laws on introducing the national electronic transit system, on alleviating the workload on the judges of the Anti-Corruption Court, and on canceling licensing for telecommunication operators. The experts differed in opinion on the Law “on restarting governing institutions” and on the attestation of prosecutors.

In the previous round, the Index was 0 (zero) points. 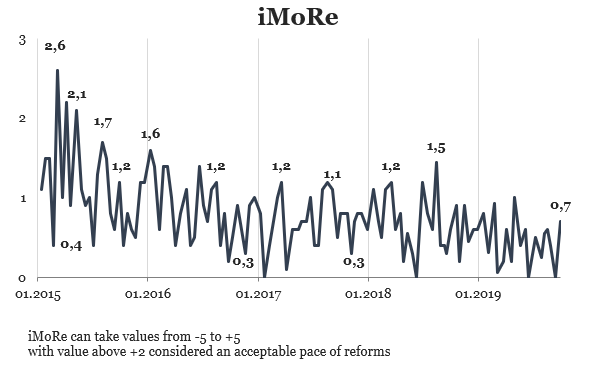 The Law on introducing an electronic transit system at the customs offices, +2.5 points

The common transit procedure allows exporters from the 35 countries that acceded to it to transport goods with minimal formalities. It is enough to make a customs declaration – and the cargo carrier can cross any borders between these countries. There is no need for executing any additional documents at each border. This issue is regulated by Convention on a Common Transit Procedure that was adopted by the EU back in 1987.

Ukraine wants to accede to that procedure, so that our business will also enjoy the same opportunities. To that end, a number of conditions must be met. One of them is to introduce at the customs offices the IT-product installed by all the 35 countries using the common transit procedure (New Computerised Transit System (NCTS)).

Law 78-IX of September 12, 2019, creates such opportunities. It regulates NCTS introduction; this will enable Ukraine to exchange customs information with the other countries that have implemented this system and obtain the information required for transferring goods.

This IT-product must be used in Ukraine for 1 year before the country becomes eligible for receiving an invitation to accede to the common system.

The Law on alleviating the workload on the judges of the Anti-Corruption Court, +2.0 points

The Law on the HACC, which describes all the details regarding the creation and functioning of the Court, was adopted by the Parliament and signed by the President in June 2018 (receiving +5.0 points from iMoRe experts, see imore#87). The Court consists of 38 judges; of these, 27 are first instance court judges and 11 are judges of the appellate chamber.

When the Court began operating, it turned out that the workload on the judges was too high, preventing them from considering TOP corruption cases effectively. On the average, one judge had to consider about 100 cases simultaneously.

Law 100-IX of September 18, 2019, resolves this problem. HACC will only consider TOP corrupt officials’ cases previously investigated by NACU and SAPO. The judges’ workload will be reduced to 10-12 cases.

The Law on canceling licensing of telecommunication operators, +2.0 points

Law 102-IX of September 18, 2019, harmonized the provisions of the above laws. From now on, before starting to provide telecommunication services, the operator will only have to notify the regulator (NCSRCI) of its intention.

The Law on public service that was previously in force rendered it impossible to hire and dismiss public servants fast. Therefore, it was hard to promptly overhaul the State machinery.

To address this problem, the MPs adopted Law 117-IX of September 19, 2019. It simplified the dismissal and hiring of public servants, established contract-based public service, and legalized electronic document management.

The iMoRe experts differed in opinion on that Law – there were positive as well as negative estimates. The median of the estimates is positive.

Changes to the Tax Code providing for unified PIT and USST accounting, +0.8 points

In most cases, the Personal Income Tax base is the same as the Unified Social Security Tax base. However, companies have to submit 2 separate tax reports to State bodies.