iMoRe №135: The “Anti-Kolomoisky law” and Changes in the Administration of Taxes | VoxUkraine

In the previous round, the index was +0.8 points. 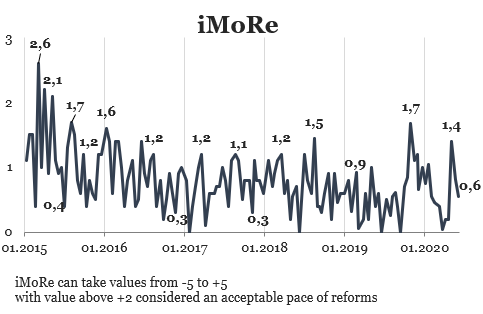 If a bank is declared insolvent by the NBU, the Deposit Guarantee Fund must withdraw it from the market. The Fund’s task is to satisfy to the fullest extent possible the creditors’ claims at the expense of the bank’s assets left. However, this procedure contained a number of gaps. To resume their activities, the unscrupulous owners of such banks appealed in court against the NBU’s and the Fund’s decisions.

The law imposing taxes on Controlled Foreign Corporations and expanding the rights of tax officers, +1.0 point

The law contains a number of innovations that implement the so-called BEPS (Base Erosion and Profit Shifting) plan in Ukraine, changing the tax administration rules, clarifying the payment rules and changing certain tax penalties.

For the purpose of paying lower taxes, Ukrainian companies often open subsidiaries in other countries, accumulating income there. It is advantageous for them to open such companies in countries with significantly lower taxes – in the so-called “offshore jurisdictions” or “tax havens”. Despite creating added value in Ukraine, they shift a large part of their income abroad.

This problem is not unique to our country. Most countries are faced with similar challenges. To minimize taxes, businesses are trying to take advantage of the differences in taxation in various jurisdictions. The main reason for this is unfair tax competition on the part of some “tax havens”.

It is very difficult for each individual country to tackle this problem. Therefore, the OECD countries joined in an effort to launch an initiative to combat the “base erosion and profit shifting”, adopting the so-called BEPS plan in 2015. It provides a framework for the introduction of the tools for making the use of “offshore schemes” less profitable and more risky.

The law has an expanded list of payments to be considered as dividends. This means that the payments’ amounts will be included in the income tax base, and taxed. These include in particular payments for securities (equity rights) in favor of a non-resident, the amount of undervalued goods and services sold to a non-resident, etc.

When conducting audits, tax officers will be able to use the “business purpose test” enabling them to see if a particular transaction with a nonresident has a true purpose other than tax mitigation. If no other purpose is identified, such transaction’s amount is to be taxed.

Another innovation is introducing controls over the financial operations of Controlled Foreign Corporations (CFCs) – the entities registered abroad but controlled by residents of Ukraine. CFCs’ owners will be charged income tax based on their share in the CFC.

The law also expands the requirements for transfer pricing reports.

The above rules raise businesses’ concerns about potential abuses on the part of tax officers. According to business associations, the tax rules for CFCs need to be clarified, the business purpose test does not provide an exhaustive list of its attributes, and in order to report under the new rules, the companies need time to prepare and gather data. Therefore, new legislative provisions may soon emerge making this law’s implementation less risky and difficult for businesses.

It will now be possible to receive individual advice on tax questions from the tax office in electronic form. A free-of-charge register of such consultations will be made available to users and posted on the tax office’s website.

It will be possible for the taxpayers to appeal a tax-related decision if they fail to do so within the statutory period (10 working days) for valid reasons. To do this, they will need to apply for a renewed application period.

The procedure for registering  newly established entities with the tax office is slightly simpler, and the tax deadline falling on a weekend or holiday is moved to the next working day, etc.