In the previous round, the index was 0 (zero) points. 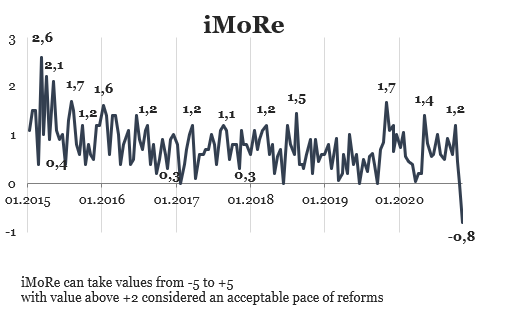 Throughout its history since the beginning of 2015, the index has been zero 6 times. The negative value of the index is observed for the first time. In 8 out of the 146 rounds, there were negative scores in some areas, but they were balanced by positive scores in other areas, and the overall score was not falling below zero.

Decision of the Constitutional Court of Ukraine on the unconstitutionality of the provisions of anti-corruption legislation on the declaration of income and property by representatives of state bodies, -4.5 points

According to the constitutional petition of 47 people’s deputies, the Constitutional Court of Ukraine (CCU) adopted decision №13-r / 2020, which declared the provisions of the legislation on a number of powers of the The National Agency for Prevention of Corruption (NAPC) as unconstitutional.

In particular, the court concluded that the NAPC’s powers to monitor the implementation of anti-corruption legislation by judges contradict the principle of separation of powers fixed in the Constitution. The CCU believes that special institutions should be set up in Ukraine to monitor judges’ compliance with anti-corruption laws and provide separate declaration rules for them.

The CCU declared as unconstitutional the NAPC’s powers to monitor and control the implementation of legislation on ethical behavior of government officials, prevent and resolve their conflicts of interest, control and verify declarations of their income and property, store and publish such declarations, monitor their lifestyle and so on.

This decision significantly affects the abilities of the anti-corruption infrastructure that has been built in Ukraine since 2014. In fact, it has provoked a constitutional crisis in the country, as it is very difficult to find an approach to remedy its consequences in a constitutional manner. Moreover, according to experts, by adopting such a decision, the CCU went beyond its powers, and the decision itself is contradictory and it is impossible to understand what actions the Verkhovna Rada of Ukraine should take to implement it.

Instead, CCU judges argue that parliament can quickly amend anti-corruption legislation to bring it into line with the Constitution, and the NAPC could ask the CCU for further action.

The constitutional crisis is still ongoing, and experts are looking for a solution to how it can be resolved.

Law unifying the approach to local government budgets regardless of the status of the settlement, +1.0 points

Law 907-IX amends the Budget Code, as it is necessary for the implementation of decentralization reform and the realization of the powers of the amalgamated territorial communities.