iMoRe #58 Groysman celebrates his one year anniversary with an index value of 0.6 | VoxUkraine

iMoRe #58 Groysman celebrates his one year anniversary with an index value of 0.6

The index for monitoring of reforms (iMoRe) has risen slightly to +0.6 points (last measurement was +0.1 point) on a scale of  -5.0 to +5.0. Positive developments were recorded in the spheres of governance and public finance. No progress was observed in reforming the monetary sector, the business environment and the energy sector.

Among the major events that occurred during this round are the Laws on Procurement of Energy Services via ProZorro and the establishment of the medium term expenditure framework (MTEF). The signing of a law on amendments to the Code of Civil Procedure on conviction in absentia was controversial to the experts that we interviewed. 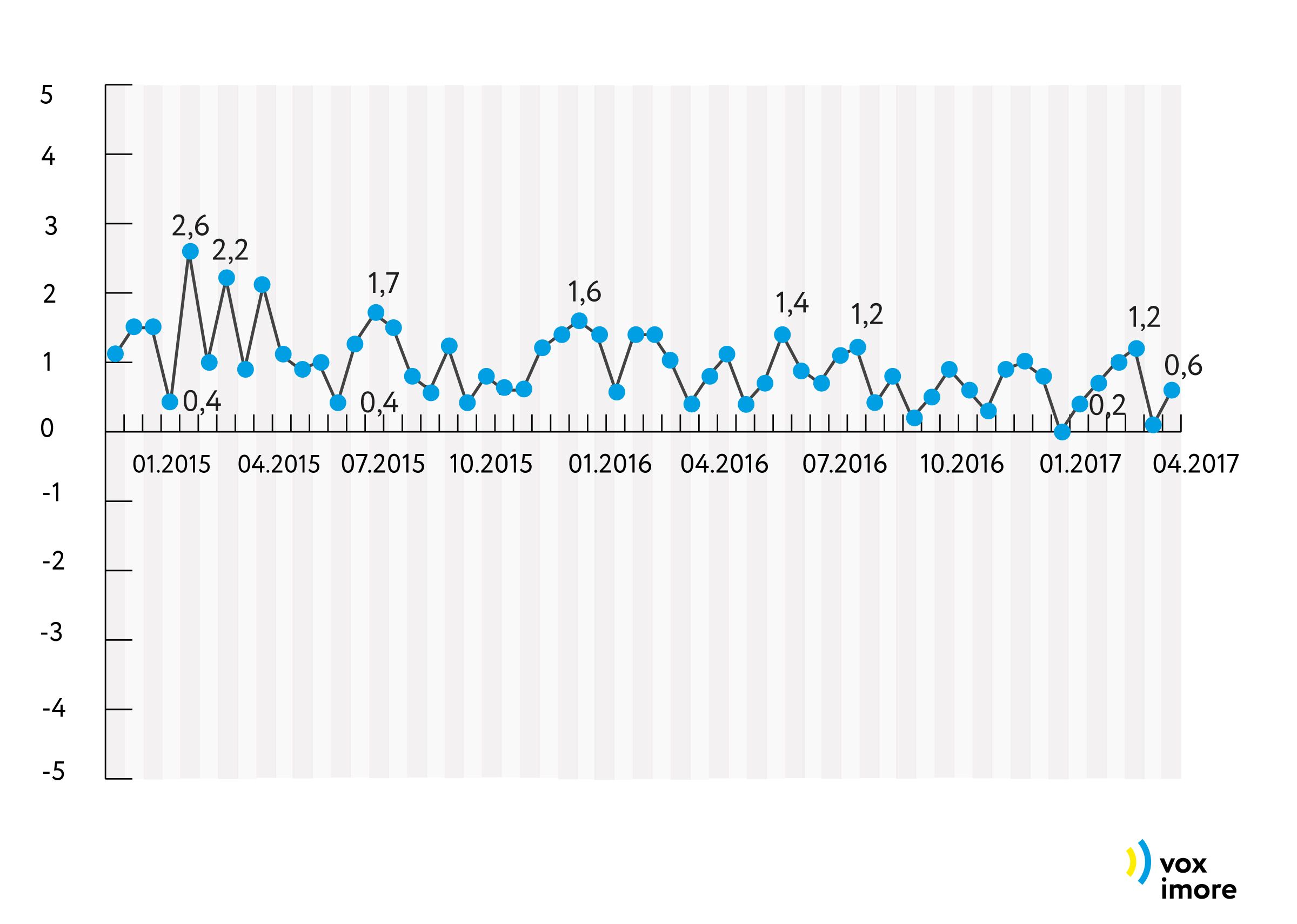 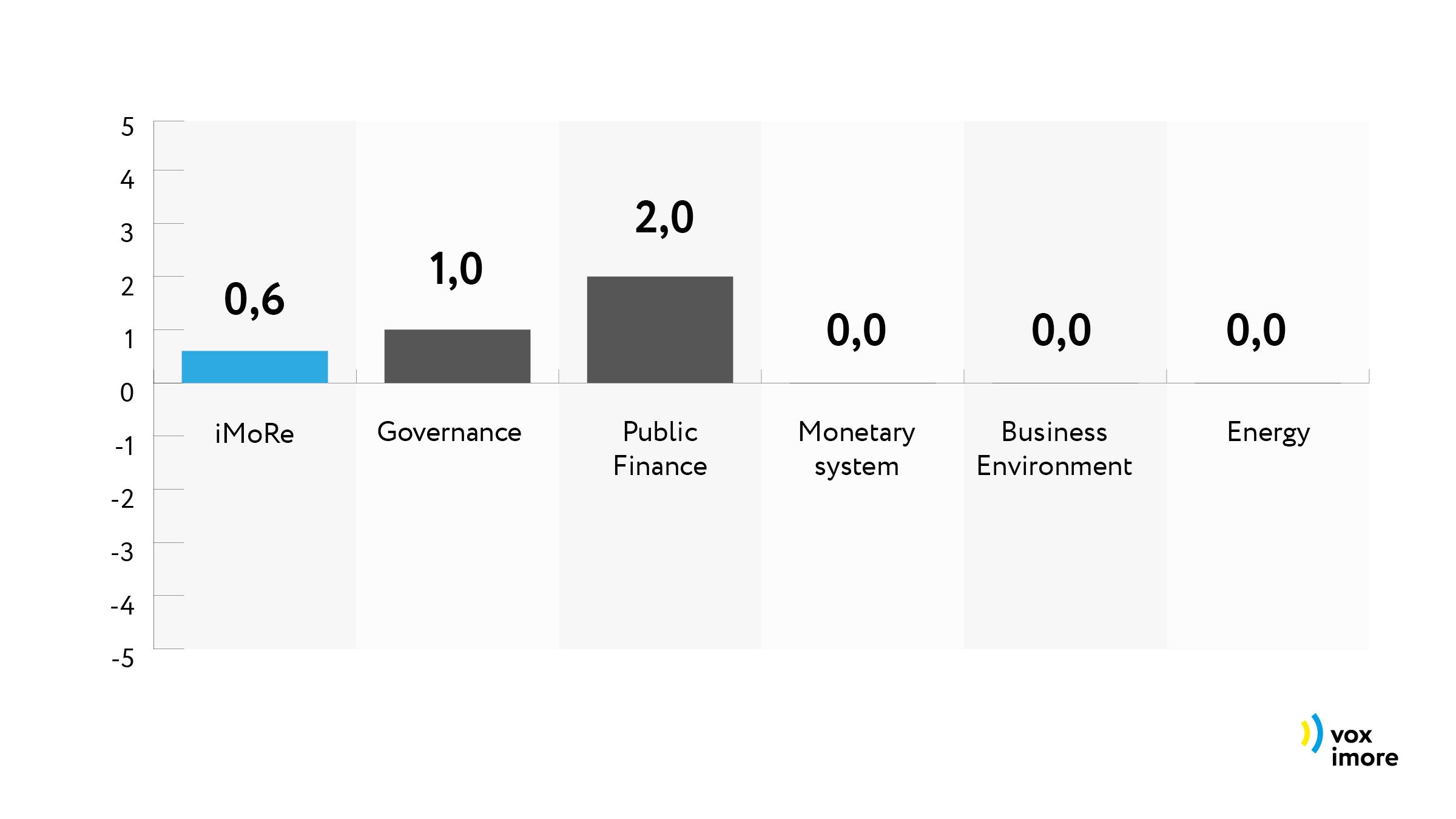 An energy service mechanism was introduced by law 327-VIII of 09.04.2015. According to the text, energy service is a set of measures aimed at reducing the consumption of energy resources or utility services. The energy service contract provides for the payment of services to account for the reduction in consumption.

Cooperation with energy service companies (ESCOs) can be an effective mechanism to attract private funds to improve the energy efficiency of buildings and facilities that are state or municipal property. However, there a number of regulatory barriers that hinder the implementation of energy service contracts. The law eliminated these barriers.

“Law established the order and procedures of energy service public procurement, which allows the customer to effectively use the tool to attract private investment into implementing energy saving measures in the buildings of state and municipal property (schools, kindergartens, hospitals, etc.). The law eliminates regulatory barriers arising after the entry into force of the Law of Ukraine “On Public Procurement” and creates conditions for foreign investors to enter the market of energy service.

“Law resolved the conflict that existed in the Law” On Public Procurement” and complicated adequate procurement procedures of energy services. ESCO can now apply to ProZorro electronic auctions, expecting to conclude agreements up for 15 years, and customers when purchasing, use the criterion “performance indicator of energy service contract” instead of “price” criterion. This will expand possibilities and guarantees for the implementation of more complex and large-scale energy service projects. ”

Medium-term budget planning, e.g. budgeting for a three-year term, is provided for in the Budget Code. However, until now the budget is always formed only for the following year. Law 1974-VIII of 23/3/2017 created the right conditions for the implementation of the rules of the Budget Code.

“The transition to medium-term budget planning in Ukraine is the most important systemic development in budgetary policy that will provide a strategic approach to identifying priority measures and appropriate distribution of limited state resources.

It aims to four objectives: (1) consistent and predictable budgetary policy, (2) strengthen budgetary discipline, (3) evaluation of the impact of reforms and consideration of their consequences in the medium term and (4) the improvement of efficiency and effectiveness of budgetary expenditures.

Just like the State Budget for 2017 was approved with strict compliance with all requirements of the Budget Code, we have developed our model, submitted for public and expert discussion in December and after the discussion it was supported by the Cabinet and approved by the Parliament. According to our program with the IMF, we need to implement a 3-year model in 2018, but we decided to do it in a test mode a year earlier and now we have an extremely tight schedule.

Already in June we will present a new budget statement to the Parliament. It will contain both managers’ record on their KPIs achievements in the previous year as a justification of expenditures for the next 3 years and a lot of new information – total ceiling expenditure and ceiling expenditure for ultimate decision-makers. With this Resolution we introduce the deficit targeting and medium-term strategy for managing public debt. In fact, half of the budget process will proceed during the resolution drafting, and will not be rescheduled for the fall. And after the adoption of the resolution for a 3 year period and the budget for 2018, we will present a new Budget Code at the end of 2017, it will makes medium term budgeting a new standard.”

— Oksana Markarova, the Ministry of Finance of Ukraine

“The approved bill does not actually implement medium-term budget planning but provides Ministry of Finance for the preparation of the budget policy in the medium term for the period 2018-2020. The term of their submission to the Parliament has been postponed to June 15 from April this year. In the document Ministry plans to identify boundary limits that fund decision makers need to consider while preparing budget requests for three years, which aims to improve the efficiency and predictability of budget process.

The adoption of the Guidelines for three years is an important and necessary step to prepare the draft State Budget for 2018-2020 that the government must submit to the Parliament not later than 15 September, 2017.

A complete change over to MTEF will surely become a breakthrough. It will significantly increase the cost efficiency; reduce ineffective shameful practice of capital expenditures over the last months and days of the year. At the same time, inability of fund decision makers to define their priorities and plans for a three-year term may become a real challenge for the implementation of such areas. ”

Law 1950-VIII of 16.03.2017 on amendments to the CPC on conviction in absentia was met with controversial assessments by our experts: some gave a negative evaluation, some – positive.

The purpose of this law was to regulate pretrial investigation terms and judicial proceedings. In particular, the maximum period of detention is increased to 18 months in the case of particularly complex judicial proceedings against heinous crimes committed by organized groups or criminal organizations.

“Despite the fact, that one of the grounds for the necessity of the bill adoption was an unjustified violation of the terms of the judicial proceedings, the new law, by contrast, allows investigation institution to artificially delay time, and manipulate timing calculation of the proceedings.

Similarly, the provisions of this law do not touch upon the improvement of mechanisms of the judicial proceedings in absentia, including the corrupt officials, who “robbed the country in the times of Yanukovich”, according to the Attorney General. They will not help to make justice over Yanukovych and his cronies, though referring to this, the President called deputies to vote for the law. However, a bigger problem is that the prosecution body has no political will to investigate abuses of former officials than the lack of legislative powers. Unfortunately, the President signed the law, ignoring risks reported by the public, including a violation of the standards of the European Convention on Human Rights, the rights of defence and the principle of legal definition. ”