The index for monitoring of reforms (iMoRe) is  +1.1 point on a scale of  -5.0 to +5.0 for the period from August 14 to September 3, 2017 (+1.2 in the previous round). Positive developments were recorded in governance,  public finance, the monetary system and the business environment. There were no reformist legislative changes affecting the energy sector.

Among the major events that occurred during this round are the government decision regarding the establishment of directorates in the structure of state bodies, where new civil servants are planned to be hired, and the NBU resolution on the use of electronic signature in the banking system. 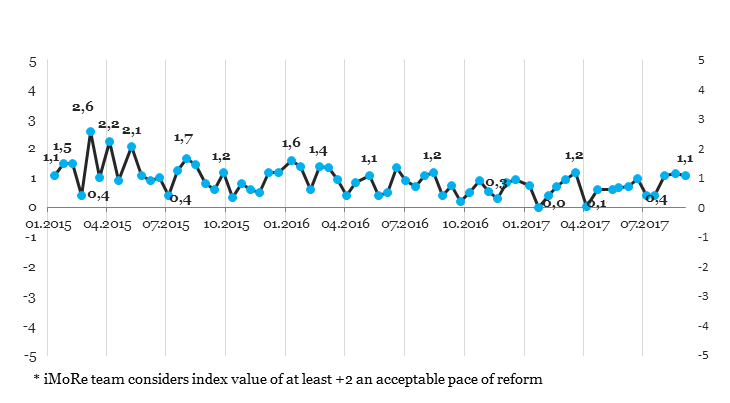 Inefficient state institutions remain a bottleneck in the process of reforms. That is why the civil service reform is one of the priorities of the government. The Civil Service Law adopted at the end of 2015 did not solve the problems accumulated in this area.

It is expected that the principles and rules of governance defined in SIGMA program, which is a joint initiative of the OECD and the European Union, will be implemented in these units. These units will be responsible for strategic planning in the ministries and will be directly subordinate to the state secretaries.

Digital technologies are gradually being introduced into the banking system of Ukraine. By replacing paper document circulation with electronic money, banks can reduce their costs and optimize business processes.

Each of these types of signatures provide for its features of use, as well as the requirements for the execution and storage of electronic documents in the banking system.