iMoRe №87. The Law on the High Anti-Corruption Court receives the highest score

For the period June 4 – June 17, iMoRe index was 1.2 points. The major event of the round is the law on High Anti-Corruption Court.

The index for monitoring of reforms (iMoRe) is +1.2 points for the period from June 4 – June 17, 2018. Positive developments were recorded in legislation regarding governance, the monetary system and the business environment. 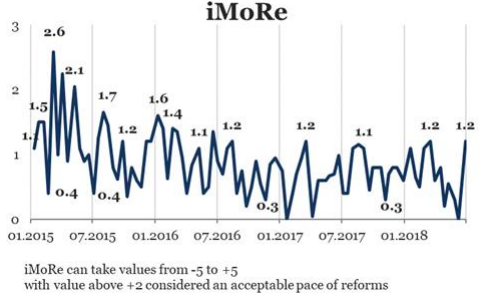 The creation of the National Anti-Corruption Bureau (NABU) and the Specialized Anti-Corruption Prosecutor’s Office (SAPO) provided opportunities for investigating cases of corruption of top officials and representation of these cases in the courts. However, corruption cases are often stuck there.

In order to ensure a fair consideration of corruption cases, the Supreme Anti-Corruption Court needs to be created without waiting for the completion of the reform of the entire judicial system. By law, the judicial system and the status of judges determine the basic principles of its formation. However, a number of issues related to its activities and the selection of judges had to be defined in a separate law.

The court will be formed within the next 12 months and may commence work after the appointment of 35 judges.