Industries on the Way Out of Quarantine | VoxUkraine

Industries on the Way Out of Quarantine

Using the McKinsey methodology, we have categorizeв the industries in Ukraine by quarantine losses, as well as their criticality and risks of resuming their work. In industries where 75% of employees are employed and which provide 90% of GDP, it is quite easy to ensure compliance with social distance and sanitary norms. In industries where 21% of employees are employed, it is more difficult to enforce them, but they are critical to society (health, retail and public transport).

Industries where it is difficult to curb the spread of the virus, but which are not critical for everyday life, provide 2% of GDP and 4% of employment (arts, entertainment, sports, part of passenger transport, other services). Given this structure of the Ukrainian economy, we may expect a fairly rapid V-shaped recovery, if such a scenario is implemented globally.

Disclaimer. Prepared within the “Viral Economy” project of the Kyiv School of Economics and VoxUkraine – a series of studies on the impact of the COVID-19 pandemic and global turbulence on the economy and social life in Ukraine

On May 15th, the State Statistics Service published an operational estimate of gross output in the first quarter of 2020: real GDP, seasonally adjusted, decreased by 0.8% compared to the previous quarter. At the same time, an economic sentiment indicator (ESI) for certain sectors of the economy, forin the second quarter of 2020, was published (Figure 1). Presumably, sentiment in the service sector fell the most. 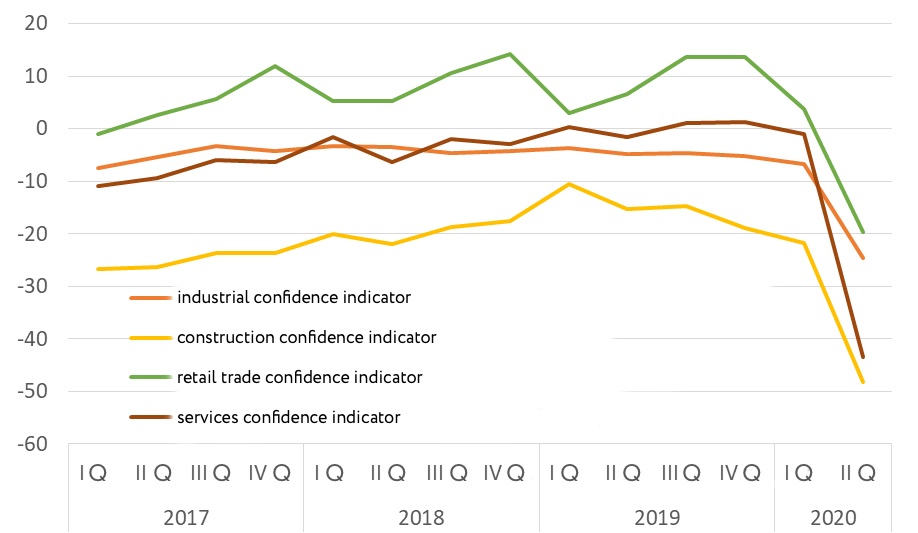 However, despite such a sharp decline, expectations for the situation in the near future are still better than the estimate for the last quarter (Fig. 2), especially for industries related to consumer demand and the population: transport, restaurants and hotels, sports and entertainment, other services (such as repair services or beauty salons).

Figure 2. Assessment of changes in the business situation in the service sector for the previous and next three months 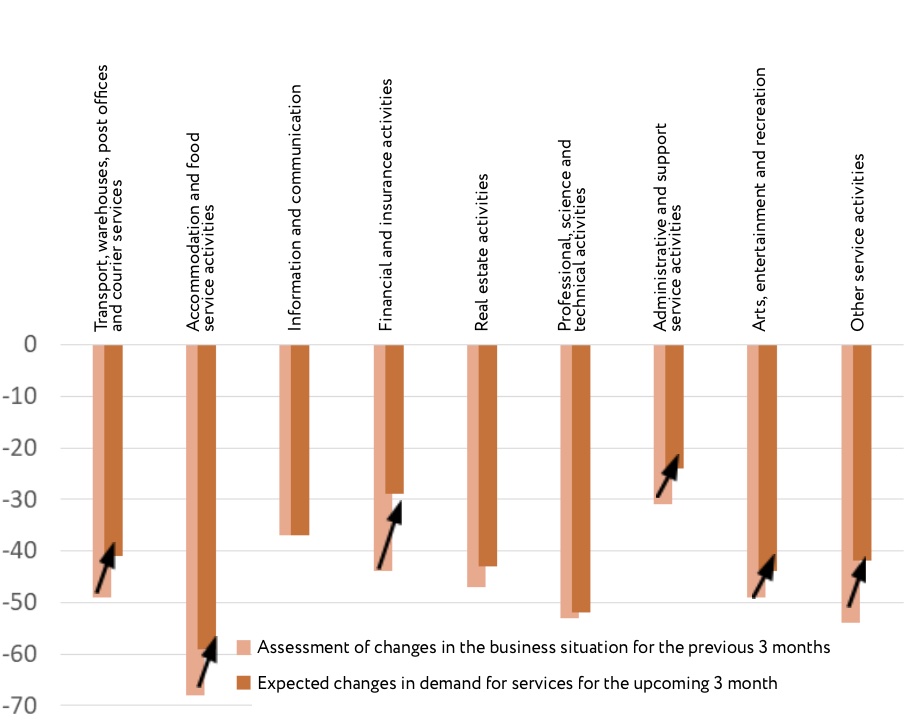 It is obvious that the expected exit from the quarantine regime played a positive role, which gives hope for the beginning of normalization of the situation. In the second half of May, Ukraine began the process of rapidly lifting the previously severely imposed restrictions. The lifting of restrictions is accompanied by formal requirements for compliance with basic sanitary standards, although for many activities compliance with them is difficult. McKinsey analysts have proposed a classification of the main activities in terms of their role in the country’s economy and in terms of the risks posed by their opening for the epidemiological situation. In the table 1 we present detailed results of this classification for the economy of Ukraine. Industries are broken down by their contribution to GDP and employment, as well as by the following indicators:

The main economic meaning of indicators is their close connection with the costs (including implicit), which are borne by each industry, and which affect its ability to recover quickly.

Table 1. Kindsof economic activity by their contribution to the country’s economy and the risks of contagionposed by their operation 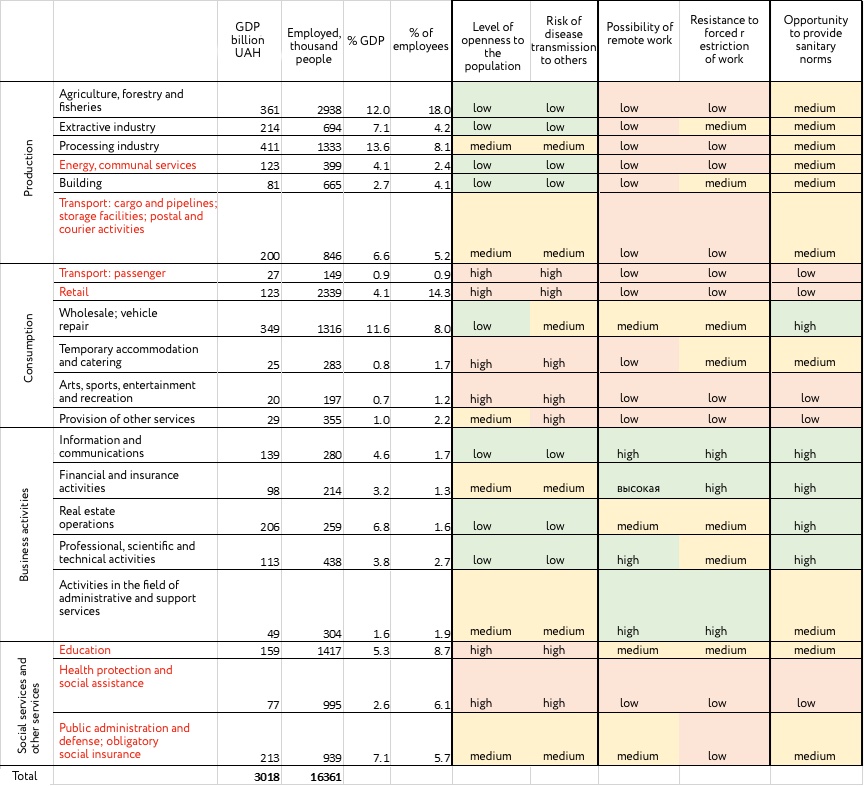 Source: SSSU, McKinsey methodology, own calculations. Industriesmarked in red – ones which we later consider critical for everyday life.

Industries with a lower level of openness, less dependence on the presence of workers at work and simpler conditions of compliance with sanitary and hygienic standards will experience quarantine restrictions only due to falling demand for their products (for example, business activities in Table 1). For more vulnerable sectors (ie with a greater level of openness and greater reliance on the presence of workers in the workplace, such as transport or manufacturing), it is not only the fall in demand that provokes a fall in their gross income. First, there is the forced slowdown in production because workers are forced to stay at home or cannot fully work in the workplace. Second, wage-saving commitments also reduce their financial stability. Thus, the possibility of their production potential, thus and supply from them, is reduced.

Detailing allows to define more precisely the values ​​of criteria for each of the sectors of business activity, but in the future to simplify the assessment of the impact on economic development it is better to aggregate them according to the latter criterion, dividing them into two groups according to importance for daily economy and basic needs. This structure is presented in table. 2.

Table 2. Activities: role in everyday life and the possibility of painless exit from quarantine 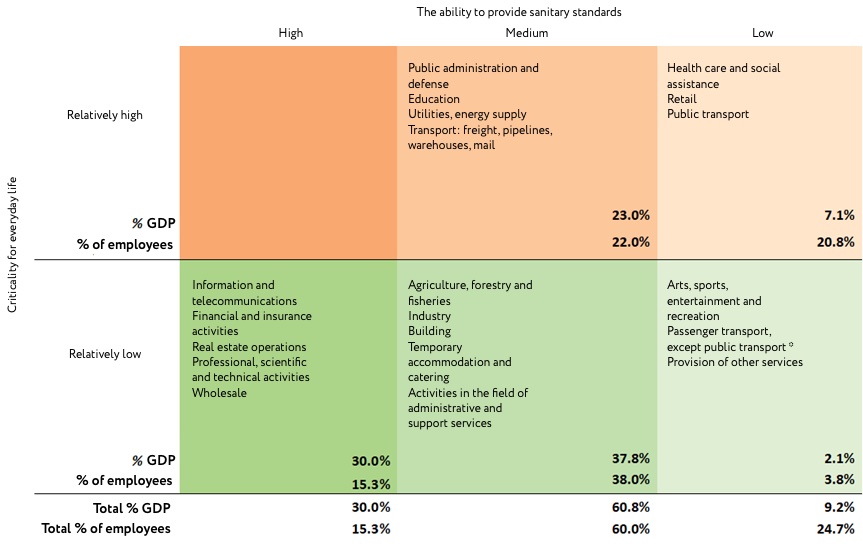 The first column revealed a part of the service sector that can recover fairly quickly given their high capacity to provide sanitation. This group provides 30% of GDP and 15% of employment. In the second column – those who either did not cease their activities during the quarantine period (subject to adaptation, as in the case of online education), or for whom restrictions began to be re lifted fairly quickly. This is 60% of the country’s economy. And in the third column – the most problematic industries. They account for up to 10% of GDP and a quarter of all employed in the economy. One problematic group is industries in which it is difficult to comply with social norms, but the functioning of which is critical for society, so even during quarantine their activities were only partially stopped (retail, public transport, medicine). They account for 7% of GDP and more than 20% of employment. The second problem group is in the lower right corner: it is characterized by low daily demand of the population for it and the highest risk of infection. These are activities that require significant interaction between people in an uncontrolled environment. Rapid normalization of the situation in this group is not expected, and it is likely that organizations and workers in these sectors will need economic support from the state. But, according to our estimates, they account for only 2% of GDP and about 4% of employment.

According to the forecast of the Institute for Economic Research and Policy Consulting, prepared jointly with Berlin Economics, due to only internal quarantine measures for the activities of this group and the partof services in the lower middle quadrant, GDP decline could be about 1.5% in 2020. This is a significant contribution to the assessment of the overall decline of 6-7% as a result of the global recession. At the same time, the forecast is based on certain assumptions about the removal of restrictions, even in an optimistic scenario. As of the end of May, we are already seeing how many countries and Ukraine, following their example, are trying to minimize restrictions (of course, taking into account compliance with sanitary norms), including those related to border crossings and tourism. This gives reason to expect that the current recession will be V-shaped one.

For example, according to current estimates by the European Commission (May 2020), the combination of supply and demand shocks caused by the epidemic in the standard modern economic model causes a V-shaped recession (the fall of the EU GDP in the second quarter could reach 12%, working time – 4%). However, there are several factors that can prolong the duration of the recession. The growing propensity to save, which has traditionally accompanied the period of crisis, is holding back the recovery in consumer demand. The main tool to change this situation is short-term state aid to households. On the other hand, enterprises experience a significant drop in gross income, which reduces their ability to finance production needs. Maintaining the liquidity of firms by the state (including through intermediaries – commercial banks) will help prevent liquidity crises that could lead to bankruptcy.

The vast majority of the Ukrainian economy (agriculture, mining and manufacturing, construction, wholesale, business services) can relatively easily ensure social distance in the process of its activities. In these areas, the intensity of interaction between workers and the population is low. Therefore, the additional costs directly related to the implementationof the highest level of sanitary and hygienic measures are rather low and, most likely, will not create a significant financial burden. Instead, the main challenge for enterprises in these industries (except agriculture) will be low demand, especially external. Therefore, the profile of overcoming the crisis will depend on the speed of recovery of the globaeconomy.

Other sectors of the economy, especially those the most vulnerable to the contagion, such as retailers, healthcare, personal services, and public transportation, can respond flexibly to restrictions or resume work relatively quickly. Some of them have state support, including through the Stabilization Fund (activities funded by the budget). Another part, mainly medium and small private businesses, belong to the categories with relieved fiscal and financial pressure. Therefore, there is reason to expect a fairly rapid recovery of the Ukrainian economy in a V-shaped scenario. However, the most serious risk for it is a possible second wave of the pandemic.