Inflation in Ukraine: Past, Present and Future | VoxUkraine

Inflation in Ukraine: Past, Present and Future

A thrilling story in three parts with prologue and epilogue

Inflation is always a hot topic in Ukraine – from hyperinflation in the 1990s and demand-driven price level growth in the 2000s to the present day and even the future – one of the main reforms outlined in the memorandum with the IMF is the shift towards inflation targeting.

In February 2015 the CPI inflation, already quite high, accelerated further – to 34.5% year-to-year, the highest figure in two decades. It hasn’t come as a surprise – there was a huge increase in UAH/USD exchange rate which provoked panic on the consumer market, and the population tried to spend hryvnia on anything durable “before money becomes worthless”, as buyers say.

Ukraine was plagued by high inflation since its independence in 1991. Initially caused by the price liberalization during the period of widespread deficit of consumer goods, which was a common experience of all post-Soviet and Eastern European economies, it hasn’t declined in 2-3 years, like in Poland or Baltic states, but continued to accelerate. The main reasons behind this growth were the policy inconsistency (price liberalization waves interchanged with price freezes) and the attempt to keep high Soviet-style social standards in the rapidly shrinking economy without a strong (or any at the beginning) tax base, which led to excessive money emission.

“[Hyper-]inflation is always and everywhere a monetary phenomenon” – this famous Milton Friedman quote is true for Ukraine. In 1992, Ukrainian budget deficit reached 12.2% of GDP, which, in the absence of access to capital markets, was financed predominantly by issuing money, thus, inflation reached 2000%. In 1993, the situation with the budget deficit improved slightly, but the need to always ‘surprise’ economy with ever higher inflation to have an effect on the real economy resulted in price growth of over 10,000% that year. This made Ukraine the first country in the world history that had over a hundred-fold annual price level increase  that wasn’t a consequence of a war. 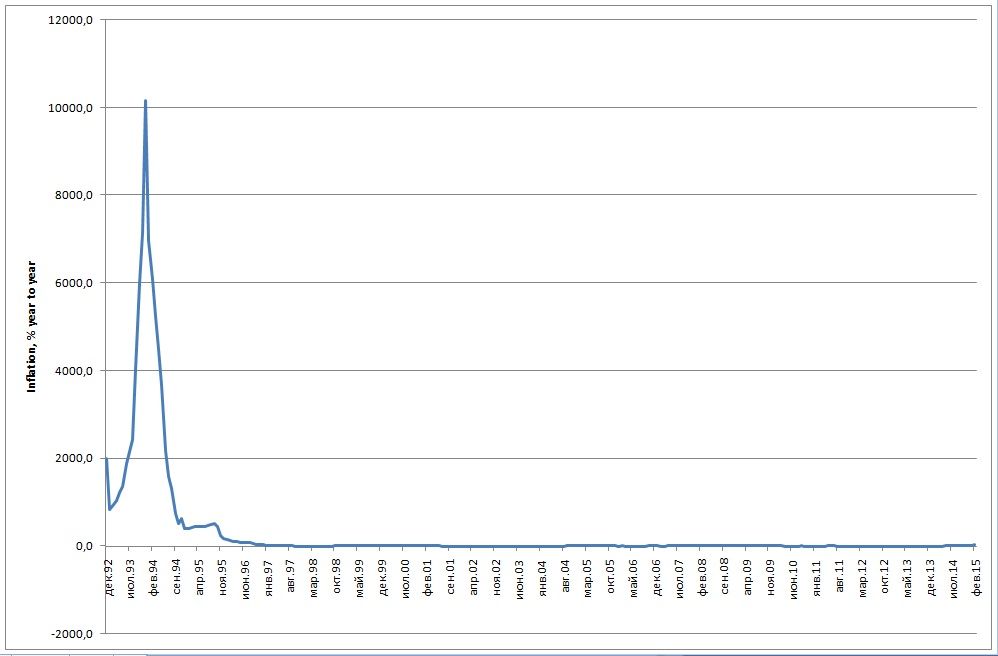 It was  impossible to make any long-term decisions with such enormous price growth, thus austerity measures were introduced, allowing to lower inflation to double digits by 1995. The consequences were severe: over 20% drop in GDP in 1994 and a similar drop in private incomes. In September 1996 the inflation lowered enough to finally introduce the local currency – UAH or hryvnia instead of ‘transitional’ coupon-karbovanets that replaced Soviet ruble in 1992 (at 1:1 exchange rate). One hundred thousand coupon-karbovanets was exchanged for one hryvnia. Since hryvnia-denominated average wage in 1996 was UAH 126 while in 1985, when the perestroika started, it was 168 Soviet rubles,  for the decade (if one assumes roughly  similar real wages) the cumulative price increase reached 100’000 times! 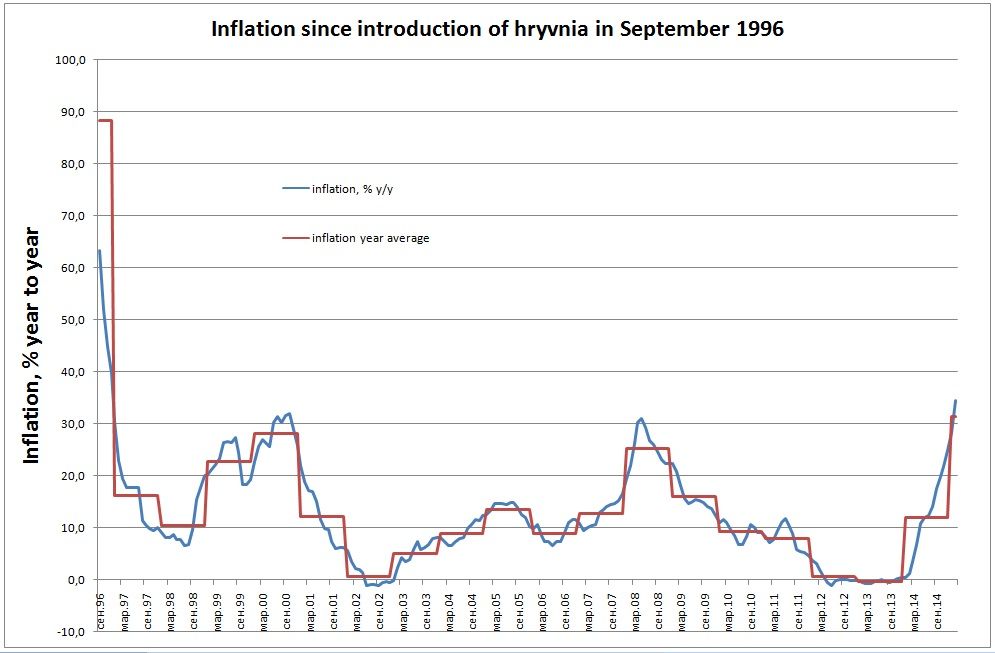 One of the reasons behind the inflation was high budget deficit. The introduction of hryvnia and fixing exchange rate at roughly 1.8 UAH/USD allowed for temporal reduction in inflation expectations, hence, the CPI growth in 1997 lowered to single digits. Budget financing shifted from the printing press of the central bank to short-term (up to one year) local borrowing. Interest rates were relatively high (in July 1998, when annual CPI growth was 6.7% the yield was over 70% per annum ), exchange rates more or less stable thus attracting both domestic and foreign capital. The situation almost completely followed the developments in the Russia at the time. Thus, when in August 1998 Russian debt pyramid fell, Ukrainian one followed the suit. Foreigners tried to extract their capitals boosting the demand for foreign currency and leading to hryvnia devaluation and a new surge of inflation. If in July 1998, just prior to the crisis, annual inflation rate was 6.7%, by December that year it exceeded 20% and stayed in 20%-30%  range until 2001. The drop in inflation was caused by notably cutting budget deficit in 1999-2000, renewal of economic growth and stabilization of exchange rate around UAH/USD 5.4 in the early 2000. The main conclusion was clear – inflation is the consequence and not the reason of economic problems, which in Ukraine chiefly originated from soft monetary and fiscal policies.

One of the ways to affect inflation expectations in a highly dollarized economy akin to Ukraine is to peg exchange rate. Seeing stable figures everyday in forex kiosks, numerous in Ukrainian cities, population starts to believe that there is no reason for price growth as well. This stabilization comes at a cost – once the exchange rate is fixed, it is hard to abandon the peg, for this may cause panic among the population and business. 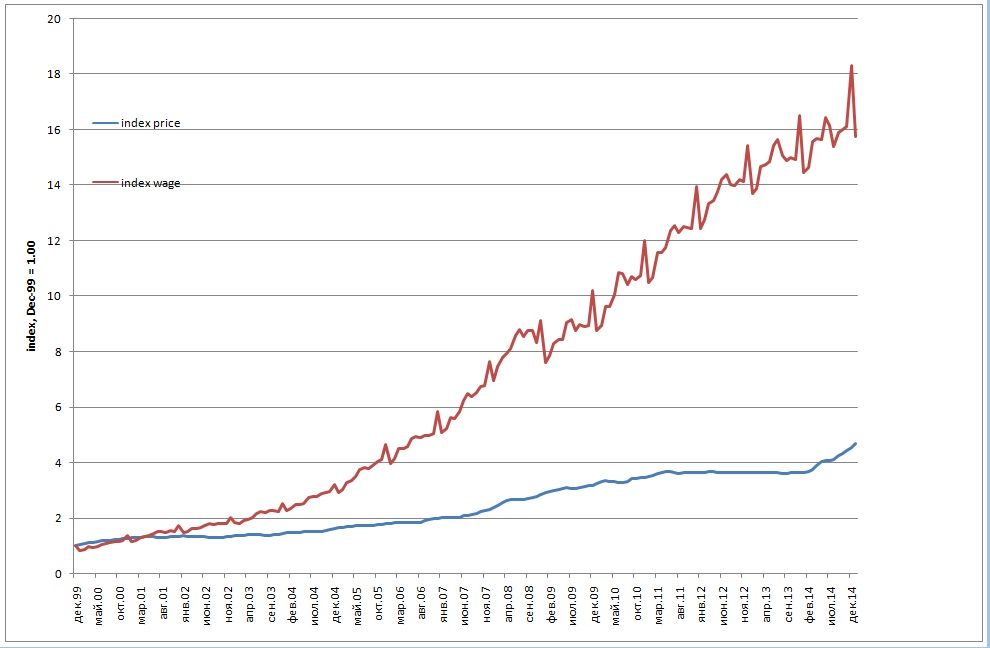 The acceleration of the worldwide economic growth and consequent rise of commodity prices (chiefly ferrous metals, which generated 30-35% of Ukrainian total export revenues) allowed for inflow of hard currency in 2003-2004. Positive current account balance coupled with fixed exchange rate led to growing forex reserves and parallel growth of hryvnia in circulation. Since 2005 the current account started to deteriorate but this was more than compensated with inflows of capital, which started after the Orange revolution. The NBU kept the exchange rate fixed, purchasing hard currency without any significant sterilization of such interventions.

Nominal incomes grew enormously (e.g. in 2005 they increased by 45%) pushing prices upward. Additional boost came from explosion of lending to households – private loans roughly doubled each year from 2005 to 2008. Such outstanding increase in resources led to growth of private consumption. In cases when domestic supply and imports weren’t enough, prices increased. As long as the private consumption grew rapidly, averaging 10.8% per year in real terms in 2002-2008, the population did not care much about the inflation, which during this period stayed almost constantly over 10% in annual terms. In May 2008, when the world optimism on commodity markets went into overdrive, yearly inflation in Ukraine reached 30%. 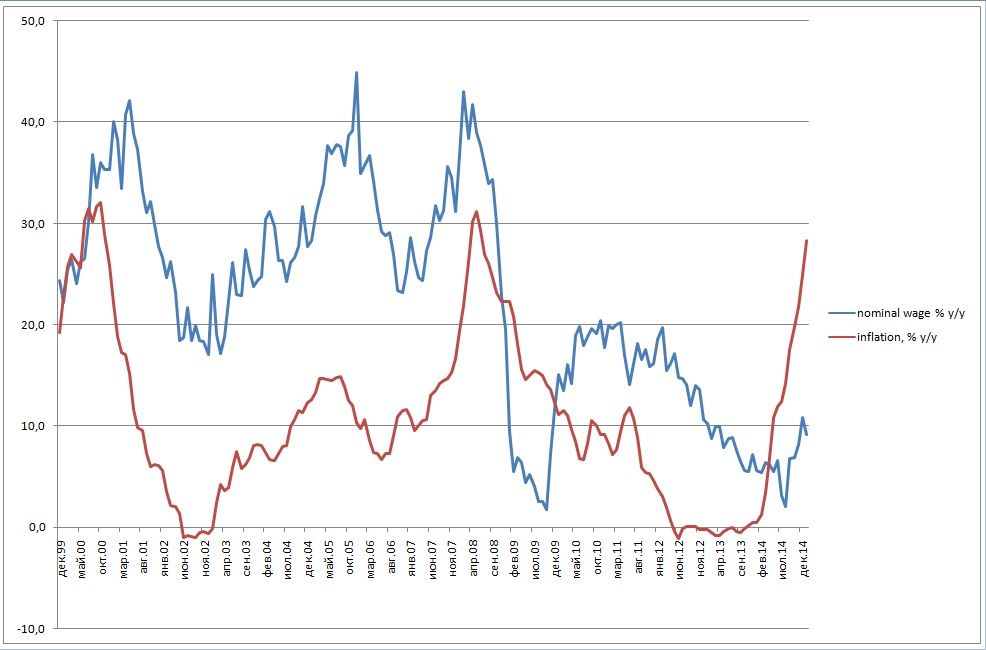 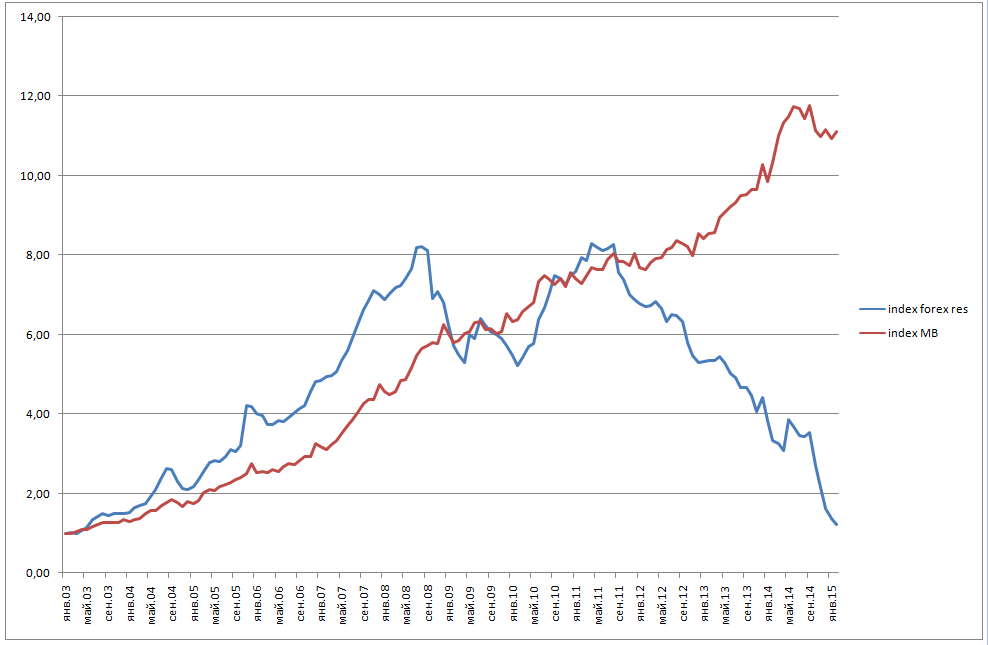 During the crisis both the GDP and private consumption fell roughly to the same extent. However, the restoration of the latter was way faster than the former – already in 2011 it was (in constant prices) higher than in 2008, while the GDP remains lower than the pre-crisis figure to this day. In the second half of 2012 the new recession has started, which continues today. In order to fight it the government supported private consumption and decided to keep the UAH/USD exchange rate fixed. Therefore, two factors pressed prices in different directions: incomes pushed prices upward while lower economic activity pulled them down. Over 2012-2013 the recession temporary won – cumulative price growth for these 2 years was just 3% – an astonishing drop if one remembers that during the previous decade (2001-2011) the annual inflation was on average 10.3%.

The hindering effect of the recession ended together with foreign reserves which were spent for artificial stability of the exchange rate, and in 2014 depreciation of hryvnia spurred the inflation that reached 24.9% December to December.

To summarize, in different periods different factors were behind the consumer inflation in Ukraine: