Law 1558-1 Was Passed by the Opposition | VoxUkraine

Law 1558-1 on restructuring of the loans issued in foreign currency was proposed and supported by the (slim) majority of the de facto coalition. However, VoxUkraine’s analysis shows that the critical voices came from the oppostition.

On July 2, 2015, the Ukrainian parliament passed a controversial law 1558-1 about restructuring of the loans issued in foreign currency. The law mandates that the principal of a class of loans issued by the Ukrainian banks, whose nominal value is tailored to a foreign currency, is recalculated in the domestic currency at the exchange rate at the date of the issue of the loan. Effectively, this law creates a broad indiscriminatory windfall from the banks to the holders of the loans, who have not yet repaid them. There was an immediate backlash from the public and expert community, as well as the government, and the president has strongly opposed the law on record.

In this post, we attempt to identify the members of Rada whose votes were crucial in passing the law and who tried to fight the law by voting against it.

Thus, the law was passed because there was unusual support from the group of deputies, mostly the opposition, who tend to vote against the core of the coalition members.

This suggests at least two possibilities: First, there could have been a compromise between the leadership of the coalition and some important members of the opposition. Alternatively, the leaders of the coalition, including the speaker who put the law to vote, gambled and traded favors to appease supporters of the law, hoping that the law will not pass. This gamble was sabotaged by the members of the opposition who (unexpectedly?) gave the missing votes.

There is anecdotal evidence that games were played. First, the head of the presidential faction voted against the law and resigned after the law passed. Second, the speaker, who is also the member of the presidential faction, put the law to vote twice, and the law did not pass the first time. Third, there is an interesting pattern in the voting of the de facto opposition to which we come back below.

In any case, the end effect is that the coalition is now in the midst of a scandal propped by critical votes of the opposition.

Our analysis does not use the nominal identification to define the coalition, the independents, and the opposition. Instead, we use correlation patterns in the voting over the last 120 laws that were passed by Rada. We group together the members of the parliament who vote identically at least ⅔ of the times. There are two groups, which we call the de facto coalition and the de facto opposition, and the remainder of the deputies, the independents, who either do not correlate with the two groups at ⅔ cutoff or correlated with both of them. Figure 1 depicts the graph of the connection among the deputies. Two deputies are connected if their votes correlate at least at ⅔.

Figure 1. The graph of voting on the most recent 120 laws (the graph is clickable) 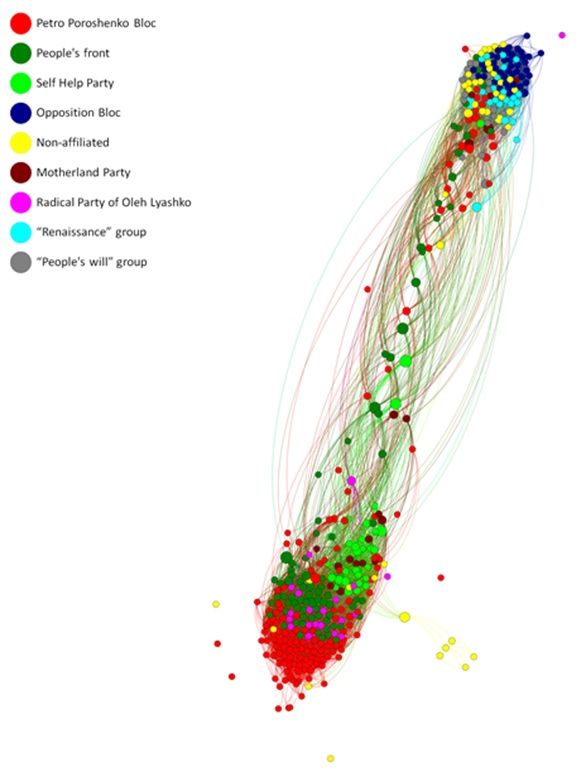 The second smaller core is in the top of the picture. It consists of 136 deputies, which belong mostly to the Opposition Bloc, “Renaissance” group, “People’s Will” group, or do not belong to any faction. This group also includes some members of the coalition parties. We call this group the de facto Opposition.

Finally, the group of the deputies that do not enter any of the two cores consists of 55 deputies. These are predominantly non-faction deputies or members of the coalition parties.

Table 1 depicts distribution of the votes on Law 1558-1 within these three groups. We classify as against all votes which were not for. Thus, in this analysis we do not distinguish among no, did not vote, absent, etc. We see that the de facto coalition was polarized with only 130 votes out of 233 in favor of the law. Together with 30 votes from the independents, the parliament was short 66 votes. These votes came from the de facto opposition (anti-core). This is intriguing because by construction the members of the de facto coalition (core) and the de facto opposition (anti-core) tend not to vote together.

Different deputies attend the parliament with different frequency. The average attendance of the de facto coalition, the de facto opposition and the independents is given in Table 2.

Table 3 lists the distribution of votes for Law 1558-1 among the members of Rada with attendance rates above 80%. These are the deputies who vote regularly and for whom correlation of the votes on 120 laws is statistically more significant.

Table 3. Voting for 1558-1 across the de facto coalition, the de facto opposition, and the independents in % among members with attendance above 80% (in brackets, we give % for all members)

We observe that the distribution of votes for the de facto coalition and the independents is approximately the same for the members with high attendance as for all members.