Lessons Learned From a Decade of Georgian Reforms | VoxUkraine

Lessons Learned From a Decade of Georgian Reforms

Georgian reforms have become an internationally traded commodity. Ukraine could really learn from Georgia’s experience, – writes Eric Livny in his column for VoxUkraine.org. Georgia is held as a living proof that change is possible, that new countries can overcome the post-Soviet crime-and-corruption predicament and establish a modern and efficient state. Reforms are not a myth, they are the everyday reality for anybody living and working here. A key problem still haunting Georgia today is that the risks of investing in the country outweigh many of the locational and ease-of-doing-business advantages it offers. And, perhaps paradoxically, instead of abating, the risks of an investment in the economy may have increased after the Rose Revolution of 2004.

Georgian reforms have become an internationally traded commodity. Underappreciated and no longer wanted at home, some of Georgia’s former reformers are doing well-paid consulting gigs in Mongolia, Central Asia, Ukraine, Moldova and further away emerging markets. Sensing a business opportunity, a group of former government officials groomed by Kakha Bendukidze, the mastermind of Georgian reforms, has recently established a consulting agency, “Reformatics”. “The chosen”, such as Georgia’s former Minister of Health Sandro Kvitashvili and former Deputy Minister of Interior Affairs Eka Zghuladze, are enjoying a second political life… in Ukraine. The list is topped by Mikheil Saakashvili (who is, in fact, wanted in Georgia), current non-staff advisor to President Poroshenko’s and chair of Ukraine’s Advisory International Council of Reforms.

ISET also got a piece of the action by virtue of hosting Ukrainian delegations brought to Georgia by the Caucasian House, a small Tbilisi-based NGO with a track record in conflict resolution activities. On Wednesday this week, I spent some 8 hours “up in the air” between Kyiv and Tbilisi in order to speak at the forum “Economic Reforms and Lessons Learnt from Georgia”. On the way back to Tbilisi, while my plane was cruising at full throttle above Ukraine and the Greater Caucasus range, I could not help but think about what Ukraine could really learn from Georgia’s experience.

Ukraine’s fascination with Georgia and Georgia’s reforms is based on two convictions. First, Georgia is held as a living proof that change is possible, that new countries can overcome the post-Soviet crime-and-corruption predicament and establish a modern, lean and efficient state. Second, Georgians are appreciated for staunchly defending their national sovereignty and territorial integrity against Russia’s aggression.

If Georgia can, the argument goes, there is hope for Ukraine.

The story of  Georgia`s economic reforms in two charts

Since this blog is about economics, I will mainly focus on the reforms dimension of Ukraine’s “Georgiomania”.

When viewed from 10,000 meters high, the story of Georgia reforms can be summarized by these two charts. The first one, produced by the WB, shows the dramatic improvement in Georgia’s ranking on all indicators of good governance from 2003 to 2013.

The numbers on the chart indicate the percentage of countries worldwide that rank lower than Georgia. Higher values indicate better governance scores. As shown, in 10 years, Georgia more than doubled its ranking on all dimensions of governance. Note that Georgia performed as well on most other global indices, including, most famously, the World Bank’s Doing Business Index, and the World Economic Forum’s Global Competitiveness Indicators. 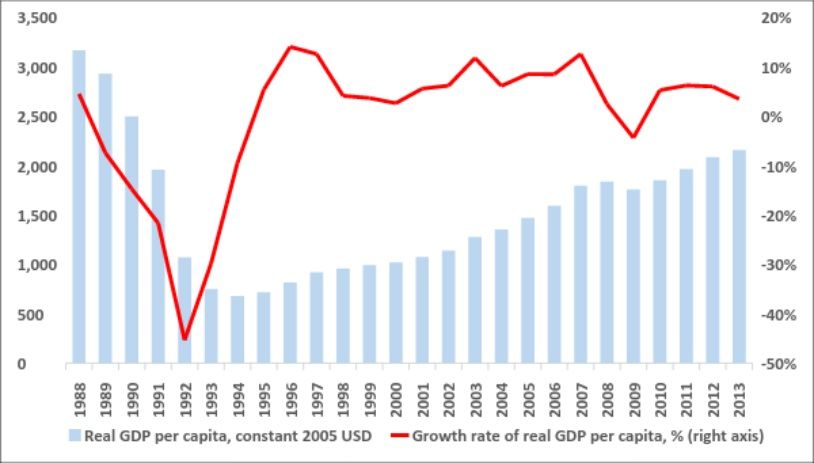 The point here is that, having reached its nadir in 1994, independent Georgia’s economy has grown (from an extremely low base) at roughly the same annual rate in 1995-2003 (with crime and corruption) and in 2004-2013 (with very good institutions).

How come “good institutions” do not make any difference, at least as far as economic growth is concerned?

The doors are open, but is anybody willing to come in?

Before anything else, let us clarify that Georgia’s reforms are not a myth, they are the everyday reality for anybody living and working here. Georgia is amazingly safe. There is almost no street crime to speak of. Certainly gone is police harassment and petty corruption. Doing business is indeed very simple as far as all the formalities are involved. Georgia’s borders are probably the “thinnest” in the region. Coming in and going out is very easy for exporters, importers and travelers. Customs procedures have been significantly rationalized. Border police is very professional and welcoming (with bottles of wines, until recently). The traditional hospitality of the Georgian people is an established brand, more established, perhaps than that of Georgian reforms. The government bureaucracy is fairly lean and professional. Most government officials even speak English, helping impress donors, foreign diplomats, investors and … international rating agencies, such as Fitch and Moody’s.

What Georgia’s reformers managed to achieve in an amazingly short time is remove any barriers to economic activity and open the country up for foreign investment and foreigners – from freelancers who contribute to the county’s feel-good atmosphere, to investors and corporate lawyers, agronomists and expert farmers, teachers of English and economics – people who could help move Georgia’s economy forward. Until 2012, the open door policy may be said to have been Georgia’s state religion.

What may have been lost on Georgia’s reformers, however, is that open doors are neither a necessary nor sufficient condition for significant, long-term investment to come in.

“Open doors” are not a necessary condition because investors would bribe their way through any doors if the business opportunity is there, as is the case in the oil- and gas-rich Azerbaijan.

“Open doors” are far, very far from being a sufficient condition. In the presence of serious risks investors may come in to enjoy a country’s hospitality but would not park their money there beyond a few years.

A key problem still haunting Georgia today is that the risks of investing in Georgia outweigh many of the locational and ease-of-doing-business advantages it offers. And, perhaps paradoxically, instead of abating, the risks of investment in the Georgian economy may have increased after the Rose Revolution of 2003. 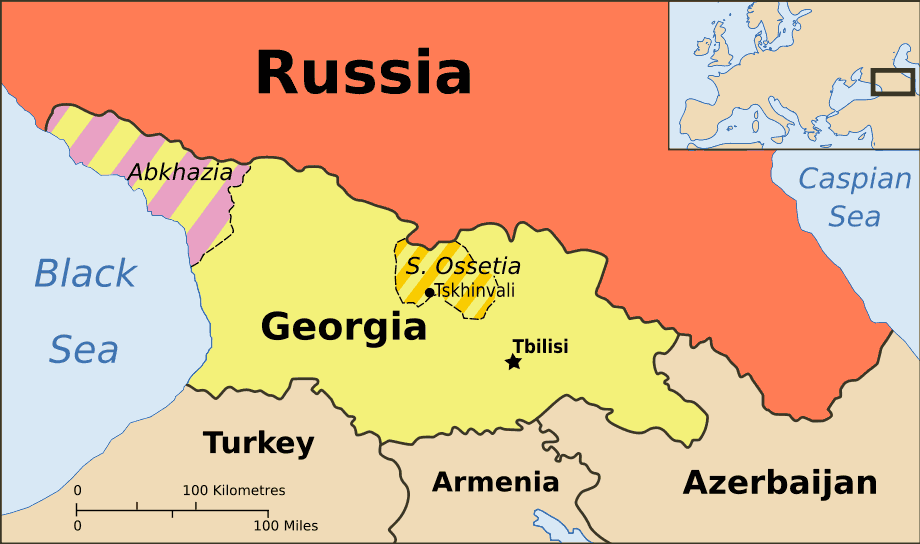 Investment risks are a rather large basket.

First, Georgia’s small market size (internal and external) and tiny labor force pose significant COMMERCIAL RISKS to any project that seeks to produce and/or sell in Georgia. None of the open door policies could change this fundamental fact. The loss of the Russian market in 2006 and preferential trade agreements with Europe may be said to have offset each other, but the Georgian economy will need time (and considerable investment in skills and technology) to re-orient itself from east to west.

Luckily for Ukraine, it does not face the “small market size” problem. Similarly to Georgia, however, it will have to gird for a painful east-to-west adjustment in terms of education and professional skills, production technologies and export structure, branding and marketing.

Second, there are the GEOPOLITICAL RISKS to consider. Georgia’s new leadership’s fiery rhetoric and active efforts at restoring its territorial integrity quickly transformed Georgia into a bargaining chip in the geopolitical confrontation between Russia and the West. While helping attract Western public funds and “technical assistance”, geopolitical tensions are a red flag for long-term private sector investment, unless in the presence of outstanding business opportunities of which Georgia has very few on offer. The only sectors in which Georgia attracted significant long-term FDI in recent years are transport, hydroelectric energy and … hazelnuts. The rather large FDI Georgia received in 2007 and the first half of 2008 (causing a small uptick in GDP growth) did little to promote long-term productivity, exports or jobs. Rather, it merely fed a real estate bubble.

Clearly, Ukraine’s economic recovery will not be possible as along as investors expect further violence to erupt in Donbas and, God forbid, spread to other Russian-speaking parts of the country’s south east. With this in mind, Ukraine’s goal should be to freeze the ongoing conflict and assure investors that military “solutions” are permanently off the table.

Third, Georgia performed rather badly in SECURING INVESTORS’ PROPERTY RIGHTS. The Georgian Ministry of Justice and state prosecution accumulated enormous powers under Zurab Adeishvili, effectively placing them above the law, without any control by the judiciary, parliament or civil society. The institutional mechanisms and legal norms created in order to clamp down on crime and corruption, later (after 2007) came to be used against political opponents, businesses that would not kowtow, and as a means of taxing firms and individuals (for example, by using pre-trial detention and the plea bargaining mechanism to “legally” extort confessions and money). To this date, Georgia is struggling to restitute justice in thousands of cases involving expropriation of property, illegal arrests, and extortion.

With the “oligarchs” controlling the most prized assets in the Ukrainian economy (and regional politics), the country’s leadership will face tremendous pressures to restore justice, re-privatize and nationalize. The risk of Ukrainian judiciary failing to secure investors’ property rights under these trying circumstances is likely be another major challenge for the Ukrainian economy.

Last but not least, Georgia’s under-developed democratic institutions failed to perform the critical consensus-building function in the rush to implement (badly needed) reforms, resulting in grave POLITICAL RISKS FOR THE ECONOMY. The openly confrontational we-know-better and winner-take-all approach of the Saakashvili administration turned former allies into enemies, leading to mounting political tensions and protests. Luckily for the country, Georgia’s reformers did have the wisdom to concede political defeat in the 2012 parliamentary election and oversee the first peaceful and orderly democratic transition in Georgia’s modern history.

Ukraine’s current preoccupation with economic and political reforms is understandable. Yet, Ukrainian policymakers (and their Georgian advisors) should know when to slow down and start building consensus, seeking compromise rather than dominating. While having its merits, the “window of opportunity” approach – it’s now or never! – is also a source of political risks that can undermine the entire reform process in the medium term.