Main Fact-check of the Planet. How Often Trump and Clinton Lie

During the election debate, 24% of Hillary Clinton’s statements were either false or misleading. Is that a lot of lying, or just a reasonable amount? On the contrary, her opponent, Donald Trump, made misleading statements 72% of the time. VoxCheck investigated who and how fact-checks the statements of the contenders for the most powerful position in the world. 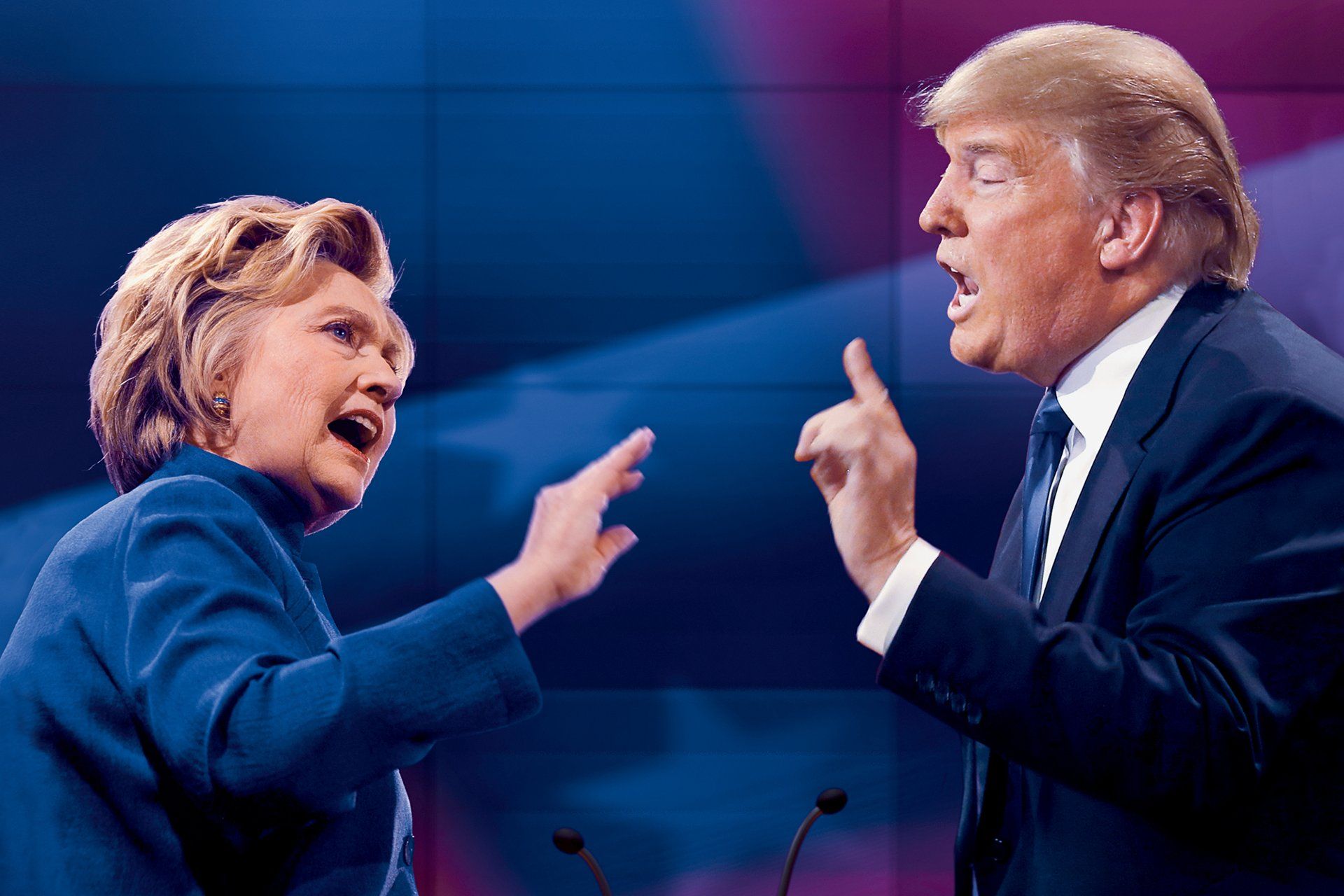 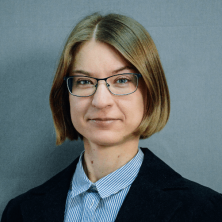 During the two election debates, 24% of Hillary Clinton’s statements were either false or misleading. Is that a lot of lying, or just a reasonable amount? On the contrary, her opponent, Donald Trump, made misleading statements 72% of the time. VoxCheck investigated who and how fact-checks the statements of the contenders for the most powerful position in the world.

The 150-million person audience for the two recent debates between Hillary Clinton and Donald Trump included several dozens of experts who examined every statement of both candidates with a critical eye. They were fact-checking candidates’ speeches to find out who is the bigger liar. Political fact-checking has existed in the US for a decade. Just think about agiotage surrounding Barak Obama’s true birthplace – Hawaii or Kenya. This topic set the entire American society in turmoil during Obama’s first presidential race in 2008. Finally, fact-checkers from Factcheck.org rechecked the information on the birther issue to confirm that Obama was born in Hawaii.

The final debate of Clinton and Trump are ahead. Following it, the critical moment of the presidential elections will take place on November 8, when the new leader of the superpower will be chosen. In the meantime, fact-checkers from faraway Ukraine decided to analyze which of the two candidates is a bigger liar.

Trump is Much More Often Fact-checked

VoxCheck evaluated a dozen Western media outlets which fact-checked the first and second debates. We selected the seven most influential media among them (five newspapers and two major American fact-checking projects): The Guardian, The Washington Post, The Daily News, The New York Times, CNN, PolitiFact, and Factcheck.org. 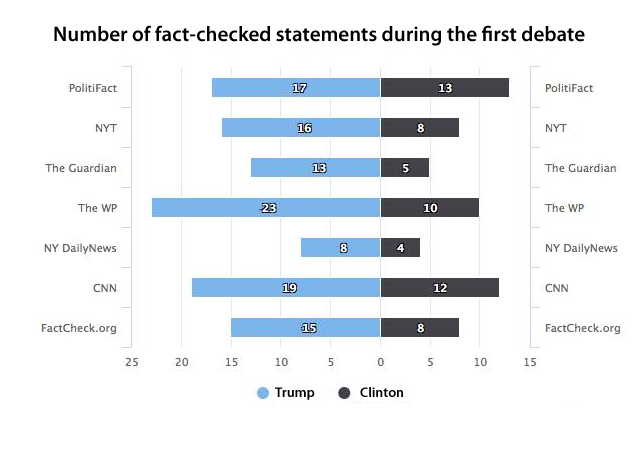 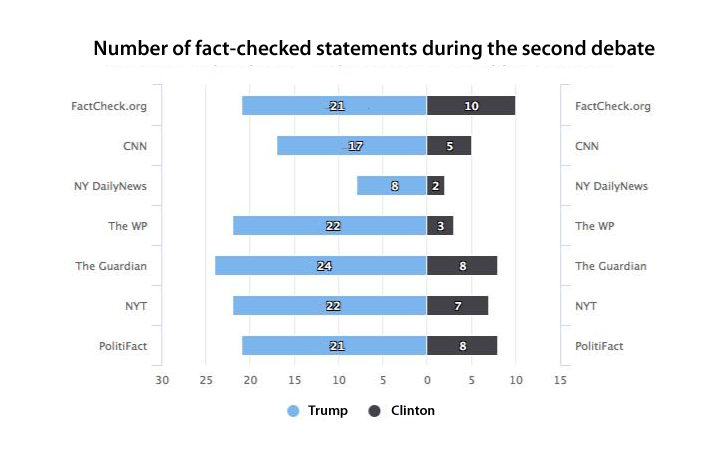 60% of Clinton’s statements are true, while 80% of Trump’s are a lie.  This is the verdict of the fact-checking done on the first debate. For example, the Washington Post didn’t fact-check the truthful statements of the candidates at all, and found only 10 lies by Clinton against 23 utterances of mis-truth from the Republican nominee for Presdient. The Guardian, a British news and opinion website, fact checked 18 total statements.  The results?  all 5 of Clinton’s were true, while all 13 of Trump’s were false.

During the second debate, the number of false statements by Clinton decreased almost by half, from 30% to 16%. In total, Clinton lied in only 24% of cases while Trump lied in 72% of cases in the two rounds of the debate. 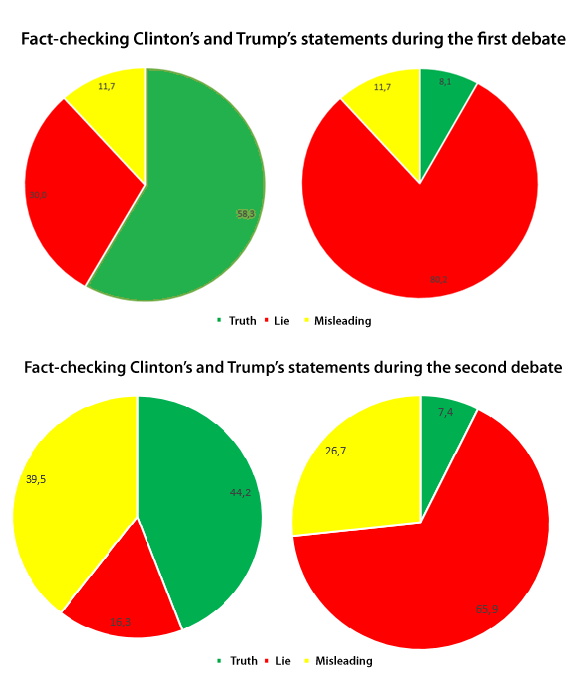 What Statements Were Fact-checked?

The range of topics and statements fact-checkers looked at is immense. During the first debate, there was only one statement checked by all the media we analyzed. (The statement turned out to be true):

As you can see, the statement is targeted at Trump, who, by the way, falsely claimed he was opposed to the war, thus adding this to his collection of false statements.

Another statement fact-checked by all media except for the Washington Post, also belongs to Clinton and is another accusation against Trump:

Hillary Clinton: “Donald thinks that climate change is a hoax perpetrated by the Chinese.”

Why is it that Trump was fact-checked more times that Clinton? Isn’t that the reason he is generally considered to be a bigger liar? Fact-checkers of the most influential world media say the selection procedure of the statements is absolutely transparent and objective and doesn’t depend on a politician’s name. “We are looking for statements of fact and times when the candidates disagreed,” says Eugene Kiely, the head and editor-in-chief of the oldest world fact-check project FactCheck.org. For example, Clinton on economists who reviewed her economic plans (“They’ve looked at my plans and they’ve said, OK, if we can do this, and I intend to get it done, we will have 10 million more new jobs.”). Or: Trump said “I did not,” after Clinton said, “Donald thinks that climate change is a hoax perpetrated by the Chinese. “Yet we ignore opinions and vague remarks,” underlines Kiely.

The Guardian follows a similar selection procedure. “Also, there’s a generalization or blatantly untrue line – like Trump’s ‘Mexicans are rapists’ line or claim that Obama ‘founded’ ISIS or Pence’s line that somehow Clinton’s policy the State Department enabled the invasion of Crimea. These sorts of claims are patently false, and cry out for checking,” highlights Alan Yuhas, a fact-checker from The Guardian.

The technical procedure of checking the debate at Factcheck.org is the following. Six fact-checkers are watching the live broadcast (most often they are staying in different geographical locations) and exchanging online messages on what statements are worth fact-checking. When the debate is finished, they make a list of statements which should be checked. The final list of statements is signed by the editor-in-chief. Then the fact-check starts.

Nevertheless, if fact-checkers apply same technique of statement selection to all politicians, why was Trump fact-checked twice more often than Clinton and why were there more lies found in his speech? “Trump has more fact checks than Clinton mostly because he lies and distorts the truth to an unprecedented degree among major politicians of the last 50 years,” explains Yuhas from The Guardian.

However, according to him, Clinton is not as honest as she may appear. “Clinton is also slightly tricky: for the last 30 years she and her husband have mastered a legalistic way of speaking that often gives them a way out of completely false statements. This tactic has also backfired spectacularly on them, of course: Bill Clinton’s impeachment trial hinged on his definition of “sexual relations”, Clinton tried hiding behind legalisms throughout the email scandal, etc.,” says Yuhas.

Fact-checkers are not sure they can influence the election race. However, there is a buoyantly high demand for fact-checking the statements of both candidates. The fact-check of the debates on the website of the American radio station NPR brought it a record high traffic (6 million users). According to the data Factcheck.org provided upon the request of VoxCheck, the traffic of Factcheck.org has doubled since the last presidential election of 2012, while the fact-check of the first Trump-Clinton debate was read by 1.6 million people. “Other fact-checking operations in the US have said the same thing: demand is very high,” says Kiely. “If it weren’t for the drum beat of fact-checkers over several months, Lester Holt might not have corrected Trump in the first debate about the Iraq war, for instance,” Yuhas adds.

“Factchecking seems to be most effective when built up over longer periods,” claims Phoebe Arnold from the British website FullFact, which was relentlessly fact-checking politicians during the Brexit campaign. According to Arnold, during the referendum period there was not that claim at all – except for a more accurate version of it.

The example of the UK brings the evidence that voters don’t always take facts into account while they often follow their emotions. American fact-checkers are aware of that. Yet they don’t give up.