The Minimum Salary Raise in Ukraine: Why so Suddenly and at What Cost for the Economy?

At the end of October, the government dealt a blow to the promising start of the 2017 budgetary process by initiating a drastic increase of the minimum salary to 3200 UAH. This decision entails numerous risks and its consequences are unclear, which must be taken into account by the government while it continues to implement this idea.

On October 26, less than a week after the adoption of the Budget-2017 in the first reading, the Prime Minister of Ukraine announced a government initiative to raise the minimum wage to 3200 UAH (it currently amounts to 1450 UAH and, according to the draft budget, it was planned to be increased to 1600 UAH since January 1, 2017).

In addition, the Government is going to unlink the minimum wage from the subsistence minimum set for working able individuals.

Such a rapid increase in the minimum wage may be explained by the intention to improve the welfare of workers, and, most importantly, to reduce the shadow wages. When it comes to the fiscal aspect of the matter, this is not the first time the Government talks over the intentions to de-shadow wages to increase revenues from the single social tax (SST) and personal income tax (PIT). 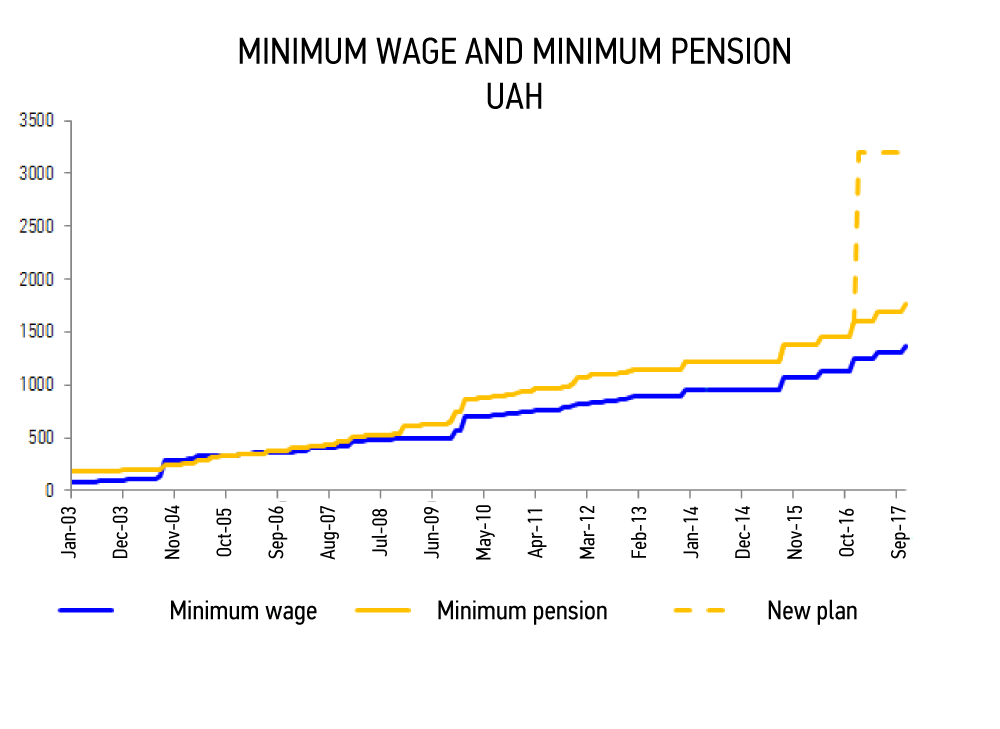 At the same time, it seems that the Government once again forgot to consider the impact of the minimum wage on unemployment – the trade-off between poverty reduction and job creation should be taken into account. The higher growth rate of real minimum wage compared to the growth rate of real labor productivity at the enterprise level may lead to the dismissal of low-skilled workers or their transfer to unreported employment.

What Is the Role of the Minimum Wage in Ukraine?

The minimum wage is important for the Ukrainian labor market. The minimum wage in Ukraine has been traditionally regarded as an indicator of social standards and not as a labor market policy tool that, among other things, improves the market position of law-wages workers. At the beginning of the 2000s, there were attempts (including some successful ones) to determine the approximate minimum wage on the basis of trilateral agreements (between the Government, employers, and trade unions [1]), but eventually, the minimum wage became the hostage of the fiscal capacity of the Government (regarding the fact that trade unions and employers had different desired level of minimum wage).

The wages of prosecutors, judges, and a number of other positions are determined according to the minimum wage rate – this is also a direct linkage. The Government announced its intention to remove such a linkage.

Therefore, raising the minimum wage will increase the (official) average wage in the economy, calculated with regard to existing employees:

Such an increase in the average wage will occur for those employees who will continue working. However, the impact of the rapid increase in the minimum wage on employment and, thus, unemployment is still unclear. Raising the minimum wage to 3200 UAH since January 1, 2017 (and not later, for example, since December 1) will be a greater risk. A gradual quarterly rise would be not only less shocking, but it would also provide the time to study its potential impact on other indicators.

Therefore, the Government has announced its intention to unlink a number of these indicators from the minimum wage, which is a rather reasonable policy.

The Minimum Wage and Employment

In theory, the Government has a choice between two policies:  increasing the minimum wage, or employment incentives. In general, the minimum wage (according to the International Labour Organization) aims at reducing poverty among the working population (that’s the reason for a term ‘a working poor’). It can strengthen the bargaining position of low-skilled workers in the labor market since employers are required to pay them not less than the minimum wage. At the same time, the sky-rocketing of the minimum wage may first of all lead to the job cuts among unqualified workers.

Regarding the large shadow sector, whose behavior is extremely difficult to predict, it’s difficult to assess the impact of the wage increase on unemployment in the Ukrainian economy. In general, the previous behavior of employers in Ukraine represents a great set of tools for reducing labor costs (or not increasing them) during shocks:

In this case, such a strategy of companies will not result in loss of household income and fiscal revenue.

This strategy of the companies can result in certain loss of both workers’ income and the budget from this category of workers.

This may result in budget losses, rising unemployment rate, and the need to increase expenditures of the State Employment Service.

Today’s [4], [5], increase in the minimum wage applies to 2.5-3.0 million employees (the workers who officially receive less than the minimum wage and face the risk of the above-mentioned measures). The wages of most of them will likely be raised to the minimum wage (especially given the fact that, according to the State Statistics Service of Ukraine, many of them work in sectors with a high degree of shadow activities, such as construction, trade, restaurant and hospitality business, and real estate). However, there’s still a significant risk of unemployment growth at a number of enterprises, especially at small ones, which won’t be able to raise the wages of all employees with wages less than 3200 UAH. Therefore, we can expect employees’ layoffs through the optimization and corporate restructurings. Closing businesses may also occur.

In these circumstances, the Government should carefully calculate the impact of raising the minimum wage on regions, since the impact will vary. In June of 2016, 50% or more workers of Chernihiv, Ternopil, Kherson, and Odessa regions (and several other regions) received less than 3200 UAH. That’s why these regions (but not they alone) are facing the risk of rising unemployment rate. The State Employment Service of Ukraine should be provided with a larger budget aimed at funding both unemployment benefits and active employment promotion.

If Raising, What to Do Next?

It is evident that cancelling the already announced increase in the minimum wage would be a political suicide. The impact on the budget is likely to be neutral, since, according to the estimates, spending for labor remuneration for budget employees can be realistically funded with higher revenues from PIT and VAT and certain reduction in granting subsidies (in the heating season of 2017-2018).

The impact on inflation is likely to be quite moderate. This is particularly true for the demand driven inflation. However, some warnings should be given concerning the supply inflation, as far as markets in Ukraine function primarily according to the principles of oligopoly and monopoly, which means that employers will partly compensate the increased labor costs by increasing their prices. In total, the additional inflation could reach up to 2 percentage points (additionally to the previously expected one, which wasn’t considering the increase in the minimum wage to 3200 UAH).

At the same time, the Government should unlink most of the indicators associated with the minimum wage, including most of fines and sanctions and the level of wages for particular positions (such as judges, prosecutors, and deputies). Consideration should be given to cancelling the norm of a mandatory wage scale in industries. This would reduce state intervention in the mechanisms for wage determination in industries.

A possible rise in unemployment must be considered when planning the budget of the State Employment Service of Ukraine. In particular, this refers to the increasing funding of unemployment benefits. At the same time, it’s important to increase funding of the active employment promotion that may be all-important for some regions. Generally, the impact of raising the minimum wage can be extremely negative in the depressed regions, but it’s still difficult to assess this impact due to the lack of data. The negative impact is likely to be greater for small business. Therefore, the Government should finally adopt effective measures to promote small and medium businesses (a respective Strategy was elaborated and put on hold).

However, it appears that raising the minimum wage to 3200 UAH should be rescheduled for December 2017 if possible. This will allow time for businesses to adapt to this novelty.

[1] In particular, the minimum wage was a subject of the General Agreement of 2002
[2] A correspondent question was included in the quarterly Business Survey: Industry, conducted by the Institute for Economic Research and Policy Consulting
[3] The mandatory wages scale is envisages in the Law “On Labour Compensation”
[4] http://ftp.iza.org/dp970.pdf
[5] https://ipl.econ.duke.edu/seminars/system/files/seminars/1070.pdf