Much Show but Little Talking? | VoxUkraine

Much Show but Little Talking?

Ukrainians have a love-hate relationship with political talk shows. In 2016, more than 3 million of Ukrainians followed heated discussions of politicians live every week. Almost each edition prompted accusations of the partiality of the shows. High-ranking talk shows have a significant impact on the electorate and can be an effective tool of political struggle. VoxUkraine has assembled and analyzed the fullest database on the topics and guests, as well as the amount of time given to particular politicians on the four main political shows of the country. What do the numbers reveal? We are grateful to LookSMI and “Media Puls” for the transcription of the shows.

Other Europeans can envy Ukrainians at least in one sphere: our compatriots have access to a higher number of political talk shows. Four of the most popular are: “Black Mirror” (“Чорне дзеркало”, not to be conflated with the popular British series) on Inter, “Shuster LIVE” (“Шустер LIVE”), which was broadcast on 3s.tv and Kyiv TV channels in 2016, “Freedom of Speech” (“Свобода слова”) on ICTV, “Right to Power” (“Право на владу”) on 1+1. In 2016, these shows went live 149 times in total.

It would not be an exaggeration to claim that millions, or rather tens of millions, of Ukrainians watched the shows at least once. For instance, on average 1.2 million of Ukrainians (older than 18 years) watched each edition of “Black Mirror” on Inter. “Right to Power”, the least popular show, was watched by 540,000 on average. 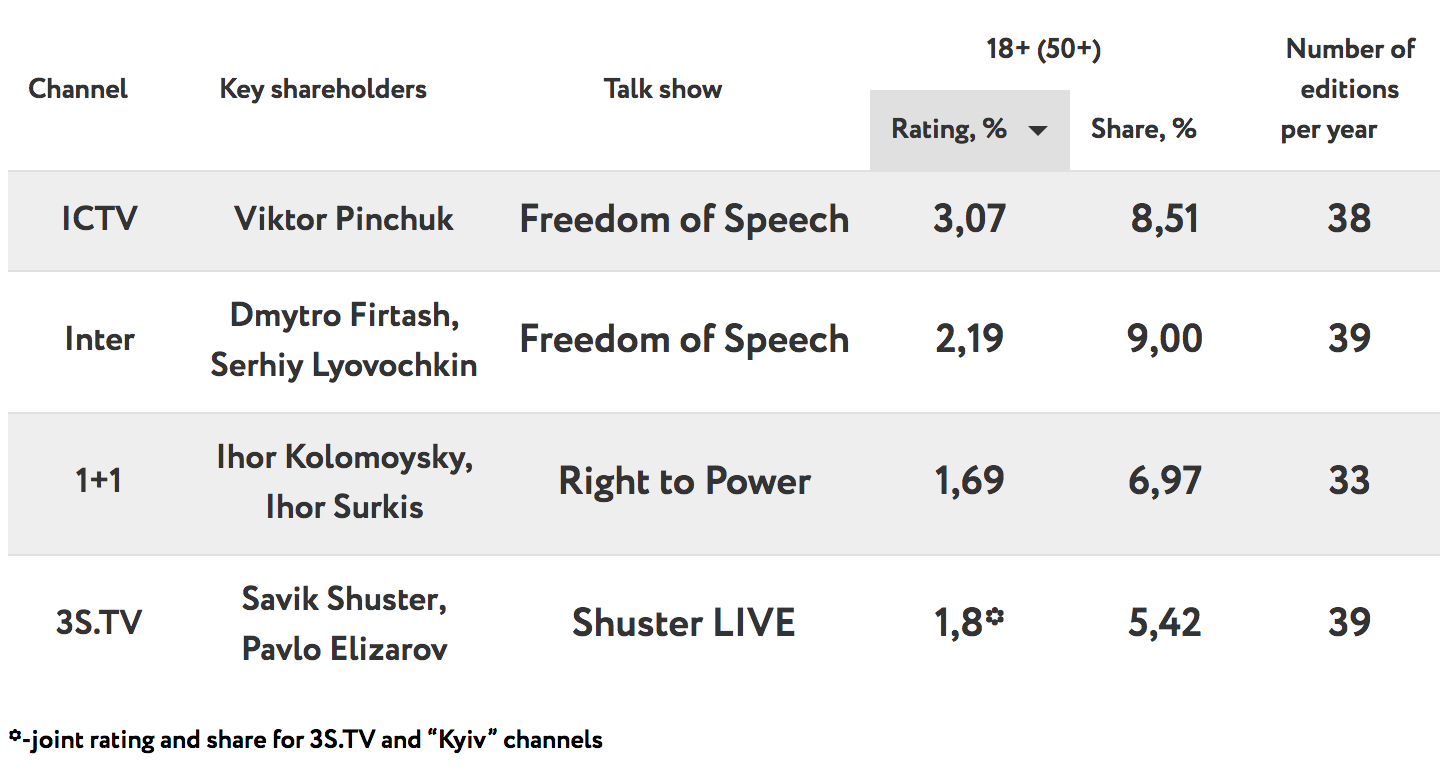 There may be nothing wrong with the interest that Ukrainians have in politics and in following verbal (and sometimes real) fights among politicians on talk shows. At least, under the condition that the editors and hosts of these shows try to be objective and present the issue impartially. Yet there are many complaints regarding the impartiality of the talk shows, in what concerns the choice of topics and guests, the manipulation of facts, as well as the loyalty to some of the guests and harshness towards others etc. Yet it would be strange, had such complaints not existed. Talk shows are often peppered with heated discussions and the losing side often feels that it has been treated unjustly.

Do the most popular political shows manipulate the audience and what kind of own agenda do they have? VoxUkraine has tried to find it out. We have also prepared a brand new type of analysis and have counted how much each politician was allowed to talk on each show. In the first part of our analysis, we have analyzed the data about all the politicians that appeared on these political shows in 2016, looking at which politicians appeared where and how often. The analysis has yielded some interesting insights.

Favourite shows of each parliamentary group

In 2016, 163 Ukrainian politicians took part in 149 editions of four political shows. Unsurprisingly, MPs were the most frequent guests. There are simply more of them than, say, ministers. 124 MPs appeared 780 times in total on a political show.

Table 1. How many times the MPs of each faction appeared on each talk show

All other factions tilt towards “Black Mirror”. Somewhat less than a half of all appearances by Petro Poroshenko Block, Samopomich and independent MPs is accounted by Inter. Radical Party and Opposition Bloc MPs also prefer Inter, with “Black Mirror” accounting for 57% and 65% of the live appearances of the MPs from these parties. It should be noted that Opposition Bloc MPs were rarely invited to (or rarely agreed to attend) “Shuster LIVE” (7 times) and “Right to Power” (3 times). Samopomich and Radical Party MPs were also rarely seen on the latter, 6 and 7 times respectively.

Let us look at the presence of MPs on live shows from another perspective. Is one hundred of visits of Petro Poroshenko Bloc MPs to the Inter channel a lot or not? Is the seven appearances of independent MPs on “Freedom of Speech” too low a number?

Supposing that all shows are politically objective, the number of the appearances of MPs from a given faction should probably be proportional to or close to the share of this faction in the parliament. In practice, this does not hold true. All the shows do not stick to the proportions well enough.

For instance, all the shows, especially “Shuster LIVE” and “Freedom of Speech”, inflated the share of “Batkivshchyna” MPs. The share of PPB MPs was lower on “Right to Power” and “Shuster LIVE”. Interestingly, these shows were not eager to invite Opposition Bloc MPs. Inter did not invite People’s Front MPs often enough. Radical Party had “the worst relation” with “Shuster LIVE”, while it cooperated the best with Inter and 1+1. Shuster LIVE invited independent MPs, which ICTV rarely did.

Table 2. Which factions does each show prefer? Comparing the shares of MPs on TV and in the parliament

Yet dry attendance numbers are not as interesting as the analysis of which MPs attend which shows. It should be remembered that “assigning” MPs to particular shows is part of the strategies of political parties. “… At some point after 2010, our program stopped deciding which politicians to invite. Parties now decided everything and there was nothing I could do about that – they decided, formed, impose. And then we are suddenly no longer the hosts of our own show, but the party headquarters are”, said Savik Shuster, the author and the host of “Shuster LIVE”, in December 2013. So who fights where?

In some factions, a specific distribution of talk shows among their MPs is observed. For instance, Honcharenko, Vinnyk and Herasymov, all from PPB, appeared on all the shows more or less evenly. At the same time, Suslova, Holub and Rosenblat preferred Inter.

When it comes to Batkivshchyna MPs, Alyona Shkrum appeared 10 times on “Black Mirror”, while Oleksandra Kuzhel appeared there 7 times. At the same time, both appeared on “Shuster LIVE” only once (Kuzhel did not appear on other shows, while Shkrum appeared once both on “Right to Power” and “Freedom of Speech”). Their fellow MP, Serhiy Sobolyev, appeared mostly on Savik Shuster’s show and on “Freedom of Speech” (13 and 10 times correspondingly). He only appeared twice on “Right to Power” and did not attend “Black Mirror”.

Count of all MP’s visits to the talk shows is available here (in Ukrainian).

Each faction has its “talking head” (someone who appeared on talk shows more often than other MPs of the group). For instance, for PPB, it is Oleksiy Honcharenko (22 live appearances), for People’s Front, it is Anton Herashchenko (22 appearances), for Opposition Bloc, it is Mykola Skoryk. The latter leads by the number of live appearances, 36 times (33 on “Black Mirror”). Dmytro Dobrodomov, an independent MP, ranks second with 30 live appearances (66% of which on “Shuster LIVE”), while Tetyana Ostrikova ranks third. She appeared live 27 times (74% of which on “Black Mirror”). Serhiy Sobolyev took a lead among Batkivshchyna MPs with 25 appearances. 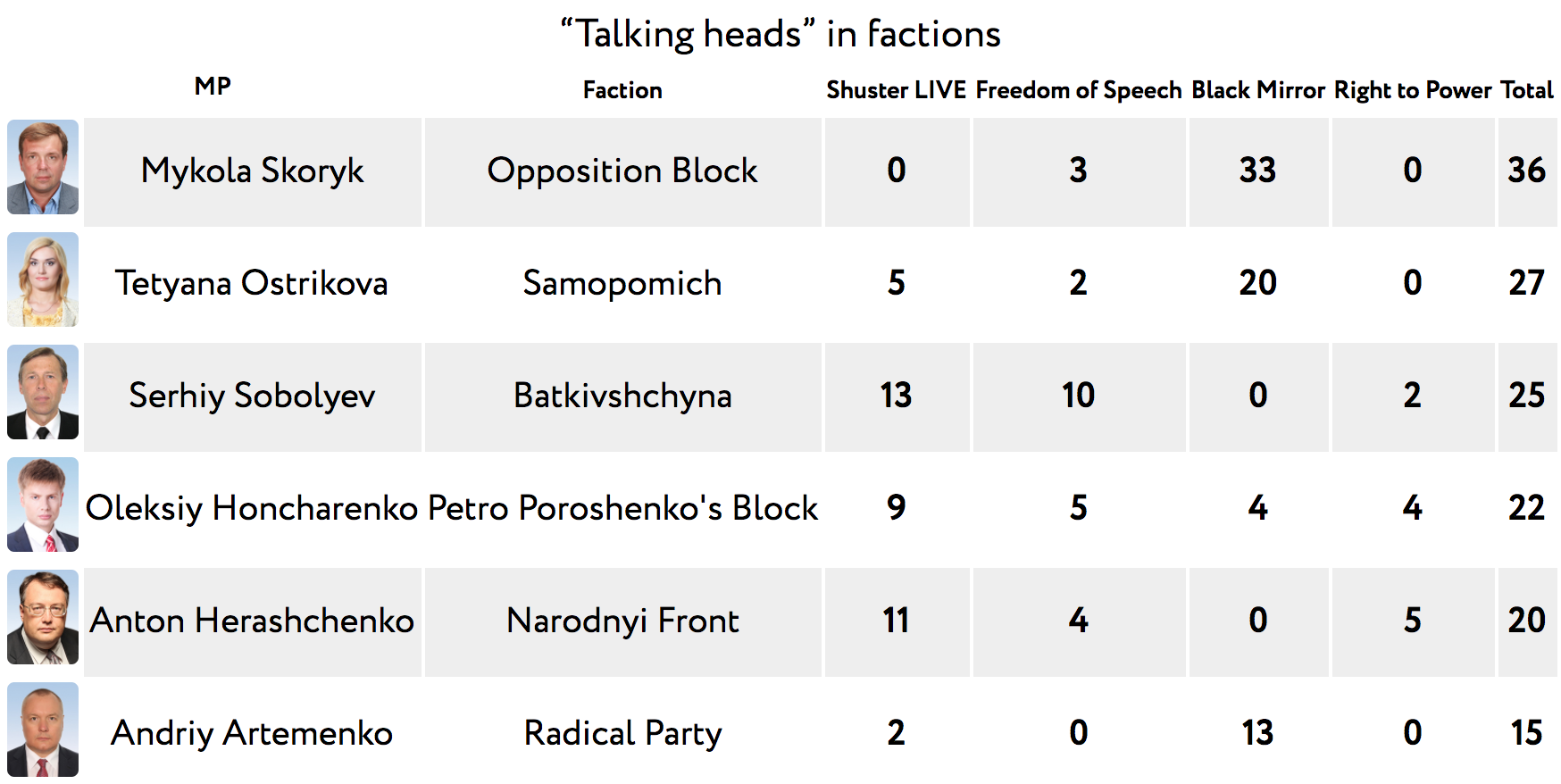 As the results of the previous chapter show, MPs did not appear on all the shows evenly. For instance, Mr. Artemenko (Radical Party group member until 20 February 2017) appeared only on “Black Mirror” (13 times) and “Shuster LIVE” (2 times), while not even once did he appear on “Freedom of Speech” and on “Right to Power”. Strange, is it not? Moreover, some MPs have only appeared on one show. We have counted at least 16 MPs that were completely loyal to one show. Here are the MPs that have appeared more than three times on one show. Viktor Chumak (an independent MP) and Yulia Tymoshenko (“Batkivshchyna”) only appeared on “Shuster LIVE”, 15 and 7 times respectively. Serhiy Kaplin (PPB) and Viktoriya Ptashnyk (independent) only appeared on Inter, 20 and 9 times respectively. Independent MPs, Vitaliy Kupriy and Taras Batenko only appeared on “Right to Power”, 4 times each. Only ICTV editors did not demonstrate such a selectivity, as we have found no MP that only attended “Freedom of Speech”.

Such a “monogamy” is surprising. Theoretically, both channels and politicians are interested in diversity: new faces, different audience etc. It can have various causes:

How the host distributes the time among participants and whether she allows them to present their views is also an important marker of impartiality. We have made such an analysis and have found out how much each MP managed to say. We will publish the results in the next article.

Comment of the deputy Victoria Ptashnyk to the article “Much Show but Little Talking?”:

Members of parliament not supported by an influential political force or a patron in the person of the owner of a central TV channel have much more troubles conveying their views to the public. Sometimes editors adhere to their position of inviting only members of the Verkhovna Rada factions. Like, why would they ask those who don’t represent the viewpoint of a group of MPs? Thus, now one of the major talk shows refuses to invite me, explaining that I’m not affiliated with any political faction.

There are cases when guest editors, while choosing participants of a programme, are guided by political affiliation or preferences of the channel’s owners. For example, Kolomoisky supports UKROP, so the members of this party, despite having no affiliation with any faction, are frequent guests of the programmes on his TV channel.

Apparently, the 1+1 TV channel owner and I have different opinions, that’s why I haven’t been invited to the “Right for Power” talk show since becoming a member of parliament. At the same time, I’d like to mention that while being a MP, I’ve participated in the “Black Mirror” talk show, and I’ve been invited twice to the “Freedom of Speech” studio and to the talk show hosted by Savik Shuster (this article analyses the 2016 data only — VoxUkraine editors).

Yet, almost all the channels share a common flaw. Even when invited to a programme, the MPs who have no influential political patrons are given much less time to express themselves on air than their counterparts, united under their patron’s wing. Unfortunately, this is what I always get to feel when participating in a live talk show”.