Neutral Price of Money: the Way the National Bank Evaluates How Tight Its Monetary Policies Are | VoxUkraine

A neutral interest rate is a benchmark against which the NBU defines its easy or tight money policies. Its level depends on Ukraine’s investment attractiveness in comparison with the rest of the world, as well as on labor productivity in Ukraine and the associated hryvnia exchange rate. Today, the neutral real interest rate is 2.8% and the nominal interest rate is 7.8%. Thus, the NBU monetary policy is loose in order to counter the coronavirus crisis.

The situation was different a little over a year ago. In October 2019, the inflation was above the target level and the impact of stable consumer demand continued. The NBU then lowered the rate to 15.5% per annum, but noted that “fairly tight monetary conditions would slow down inflation.”

The question is how to understand when monetary policy is tight and when it is loose. According to the NBU, switching to a loose monetary policy took place on June 12, 2020, when the key interest rate first stood at 6% per annum. It was officially announced to be below neutral.

The so-called neutral (real) interest rate allows the central bank to evaluate how tight/lax the current monetary conditions are. If the key interest rate is above neutral, monetary policy restrains aggregate demand and inflationary pressures, if below neutral, then it stimulates them. Furthermore, the key interest rate tends toward the neutral rate over the forecast horizon when the economy tends toward equilibrium, , that is the effects of current economic shocks are exhausting and inflation reaches its target.

Note: the real interest rates were adjusted for inflation expectations based on the Quarterly Projection Model; the dots indicate the previous forecast. Source: NBU inflation report for January 2021.

How the neutral rate is calculated and what affects it

The neutral (real) interest rate is calculated by the NBU experts, using the Quarterly Projection Model. The valuation methodology is based on uncovered interest rate parity.

It is known that a small, open economy can finance growing consumption and investment through the inflow of foreign capital. Therefore, first, the neutral price of money in Ukraine depends on the state’s investment attractiveness. It will increase/decrease according to changes in a sovereign risk premium.

Second, the neutral rate in Ukraine changes along with the world’s opportunity cost of capital – the US neutral rate.

Third, the domestic neutral rate takes into account the exchange rate component, specifically, it decreases with a faster appreciation in the real exchange rate. Because of the stronger hryvnia, investors receive additional income from the increased value of their hryvnia assets, and so it makes sense for them to agree to lower interest payments.

To determine the sovereign risk premium, we calculate the difference between the yields of Ukrainian Eurobonds in dollars (Euro-Cbonds Sovereign Ukraine YTM eff) and ten-year US Treasury bonds (UST 10Y YTM). The latter are considered a virtually risk-free asset. However, global investors will demand additional income (premium) for investing in a developing country.

The premium in Ukraine was quite high and volatile in 2016–2020 (Graph 3). Initially, the economy was recovering after the crisis. The year 2019 was marked by double elections, and the year 2020 by the coronavirus crisis and accompanying challenges. Any uncertainty with regard to the IMF program does not help either.

To estimate the neutral rate, we use the risk premium trend, i.e. a certain equilibrium level, toward which the premium always tends over the forecast horizon. In recent years, the premium has been higher than its trend, but we regard these deviations as temporary. Trends in economic variables may fluctuate over time in response to changes in the fundamental features of the economy (e.g. reforms). However, they do not react to temporary shocks (such as elections).

Neutral rate in the USA

We use the Laubach-Williams two-sided estimate by the Federal Reserve Bank of New York as the opportunity cost of capital. The figures are regularly reviewed, but during 2016–2020, the rate consistently remained below one percent (Graph 4). This value is quite low in historical perspective. The low cost of capital is associated with a global surplus of savings and slower economic growth. These factors are common to most developed countries.

It is important to consider the equilibrium real exchange rate. It depends on the fundamental features of the economy, such as productivity. More productive countries can afford higher wages, higher prices and correspondingly stronger currencies. The real exchange rate fluctuates around its equilibrium level, mainly tending toward it over the forecast horizon.

The price situation in the global raw material markets is also important for Ukraine because raw materials make up a large share of foreign trade. We export ferrous metals and agricultural products, and we import energy resources.

In 2016–2019, the situation in the raw materials markets was favorable for Ukraine, with productivity recovering after the crisis. Starting from 2017, the real exchange rate and its equilibrium level appreciated (Graph 5).

However, the year 2020 and the coronavirus crisis weakened the hryvnia. Commodity markets remain favorable, but we adjusted the equilibrium appreciation rate to reflect the impact of slower productivity growth. At the beginning of 2021, it is close to 1.5% per annum.

The emerging markets’ economies may have higher productivity growth rates than the economies of developed countries due to copying technology. Under such conditions, the real exchange rate will be steadily increasing. In the coming years, we assume that the equilibrium real appreciation rate will accelerate to 3% per annum. This is consistent with the accelerated economic growth and corresponds to the difference between inflation targets in Ukraine (5%) and in the United States (2%).

Graph 5. Changes in the equilibrium (trend) of the real exchange rate of the hryvnia and their factors,% 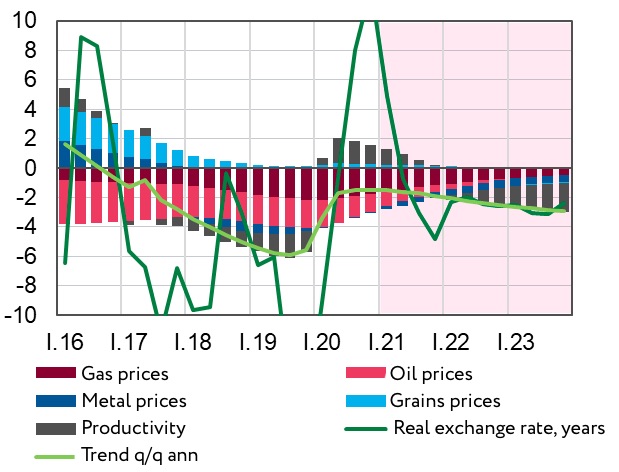 The sum of the aforementioned three factors produces the neutral real interest rate in Ukraine (Graph 6). It went down in the years 2016-2019 due to a reduced risk premium and stronger real exchange rate, and even moved into the negative zone. At the same time, in 2020, the rate increased along with reviewing the equilibrium real appreciation rate. At the beginning of 2021, it is close to 2.8% per annum.

Over the forecast horizon (until 2023), we assume that the natural rate of interest will be reduced to 1.5%. Assuming that in three years inflation expectations will be at the inflation target level, the neutral nominal rate will be 1.5% + 5% = 6.5% per annum. Note that the government or other risk-free borrowers will be able to borrow at this rate. Rates for individuals and legal entities will be higher, considering the credit risk premiums.

At the end of the forecast horizon, the NBU policy interest rate is approaching its neutral level. Market interest rates on banking instruments (loans, deposits) respond to changes in the policy interest rate. Of course, they will differ from it due to different maturities, credit risk and characteristics of banks’ business models.

However, the neutral rate forecast in Ukraine is sensitive to assumptions about consistently low rates in the United States and accelerated real appreciation. First, the rate in Ukraine will depend on its counterpart in the United States, and therefore on the pace of their economic recovery. Second, the neutral price of money in Ukraine may increase in the event of the reform stagnation and slow productivity growth.

Graph 6. Neutral rate in Ukraine and its factors, % per annum 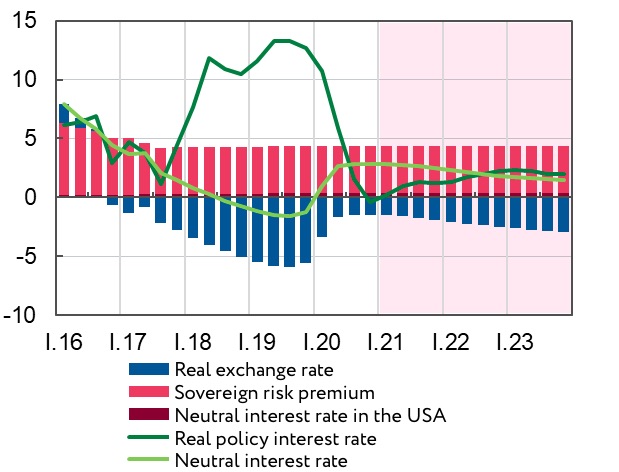 Note: real interest rates were adjusted for inflation expectations based on the Quarterly Projection Model; the methodological details and calculations from 2005 can be found in the article by Grui, Lepushynskyi and Nikolaychuk (2018). Source: NBU calculations

By comparing the NBU real key interest rate with the neutral rate, we can evaluate how tight monetary conditions are. The key policy rate in Ukraine was close to the neutral rate in 2016-2017. This was not enough to curb inflation in 2017-2018. Instead, tough monetary policy of the next two years reduced inflation to the target level by the end of 2019. Loose monetary policy in the second half of 2020 and in 2021 is designed to stimulate consumer demand and support the economy during the crisis.

Changes in the calculation

Neutral rate calculations in Ukraine contain some uncertainty and are therefore regularly updated as new data emerge (Graph 7). Specifically, they take into account the neutral rate in the US, which is also regularly updated, including the values ​​for previous years (Graph 8).

We significantly revised the neutral rate in Ukraine twice in 2020. In January, we optimistically increased the equilibrium real appreciation rate. 2019 showed steady real GDP and wages growth, which indicates productivity growth. There was an influx of foreign capital, and the hryvnia strengthened significantly. This revision lowered the estimates for the neutral real interest rate.

In April, we added a structural break to equilibrium appreciation. Its rate fell sharply with the onset of the coronavirus crisis and suspended productivity growth. The neutral rate increased accordingly.

Graphs 7, 8. Changes in the neutral rates estimates in Ukraine and in the United States

Note: the values ​​for Ukraine for October 2020 coincide with the values ​​for July 2020; The New York Federal Reserve does not publish the projected values ​​of the neutral rate; in November 2020, it suspended the publication of updated historical estimates due to high volatility during the crisis. Sources: NBU inflation reports from July 2019 to January 2021; FRB New York.

Thus, the NBU looks at the neutral interest rate when making decisions on monetary policy. It will raise the key interest rate above neutral to curb demand and inflation or lower it to stimulate them.

The neutral interest rate is a time-variant and unobservable value. Its model calculations take account of the fact that Ukraine’s small, open economy can finance high consumption and investment through the inflow of foreign capital.

The neutral price of money in Ukraine directly depends on the cost of capital in the world. However, it can decrease due to the state’s increased investment attractiveness and higher productivity growth rates.