New Requirements for the Ambulance Crew. Will the Paramedic Replace the Doctor?

Analysis of data on the work of different teams of ambulances shows that medical teams, on the contrary, hospitalize patients more often than paramedics, and therefore such fears are unfounded. You can read the full study here.

Medical and paramedic teams. Which are more effective?

The effectiveness of the emergency medical care system is assessed by the following main indicators: speed, time and quality. The percentage of hospitalizations is one of the indicators of the effectiveness of teams, other things being equal. A lower percentage of hospitalizations indicates that the team takes responsibility for treating the patient without transporting him to the hospital. Another important indicator is the time of patient care at the scene. Less time, other things being equal, indicates that the team is more effective in diagnosing and treating the patient at the scene. For example, in the case of suspected acute stroke, the target time at the scene is no more than 20 minutes, because the timeliness of transportation to the hospital and, accordingly, the beginning of diagnosis and treatment are key in this pathology. This applies to most emergencies.

The emergency medical technician will replace the drivers who will have to undergo a training course in the new profession to be able to assist in providing emergency medical care to the medical staff of the team (doctors and/or paramedics). Emergency doctors may be included in the team at the discretion of the head of the emergency center.

The emergency medical team may include an emergency doctor, a paramedic, a nurse and a driver, and the teams themselves are divided into paramedic and medical.

In our study, we tried to find out whether medical teams are really more effective than paramedics in Ukraine. The most correct method would be to compare the mortality rates of patients in emergency conditions who were assisted by medical and paramedic teams. However, the collection of such microdata in Ukraine began only in April 2020.

Instead, for more than a year, data on emergency medical team calls, departures, call reasons, service times, hospitalizations, and team diagnoses have been collected. We use these data as indicators of the effectiveness of medical and paramedic teams. To do this, we use statistical tests to compare the percentage of hospitalizations and the time of on-site care by medical and paramedic teams for the sample as a whole, rural areas and cities, patients with different categories of complaints.

The sample for this study includes 516,746 calls to the number “103” for three months (October-December 2019) to the central operational and dispatching services from four regions (Zaporizhia, Kherson, Chernihiv, Odessa regions), which automatically get to IAS “Central103”.

We selected 287,848 calls for the study, which resulted in a “brigade departure”.

The study is the first analytical material based on microdata, which is collected from the information-analytical system “Central103” (hereinafter — IAS “Central103”), which was implemented in 2019 in a test mode for the system of emergency medicine of Ukraine. Prior to the creation of IAS Central103, information on the operation of the EMD system was provided in paper form with distorted data, which led to inefficient management decisions and, as a consequence, to the low quality of emergency medical care.

The vast majority (82%) of all visits to patients were made by paramedics. In the city such departures make 77,9%, and in the countryside — 96,3%. This is natural, as medical teams are very rare in rural areas. However, in general, medical teams are more likely to visit “heavier” patients.

According to our calculations (regression model), the medical team is more likely to visit the patient in the city than in the village. It is also more likely that the medical team will come to call children under 16, patients over 60, with complaints of signs of stroke or heart pain. If a patient in the city complains of abdominal pain, fever, trauma, breathing problems, and undecided complaints, the probability that a team of doctors will arrive is lower than the average in the sample.

As can be seen from Table 1, medical teams hospitalize patients more often than paramedics — 26% vs. 19% (the difference is statistically significant).

When both types of teams responded to different conditions (fever, heart pain, at the scene of an injury / accident, threat of stroke), it can be seen that doctors hospitalized patients more often than paramedics, except for complaints of signs of stroke, where the difference was statistically insignificant (Fig. 1). No statistically significant difference in conditions was found in most cases in the villages, which is due to the insufficient number of observations.

Figure 1. Proportion of visits that ended in hospitalization by types of teams and patient conditions 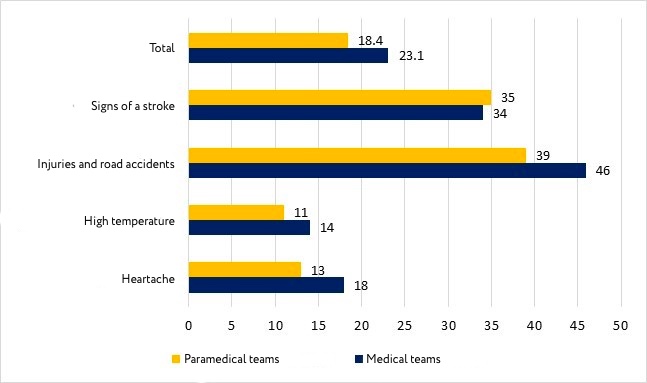 Working time at the scene

Patients who were not hospitalized received on-site care on average almost twice as long as those who were hospitalized. The difference in the time of assistance between types of teams is statistically significant, but not too large. In cases that did not end in hospitalization, paramedics provide on-site assistance for an average of 6.4 minutes longer than medics. In cases that ended in hospitalization, the difference is reduced to 4.5 minutes (Fig. 2).

Figure 2. Working time at the scene by team, minutes 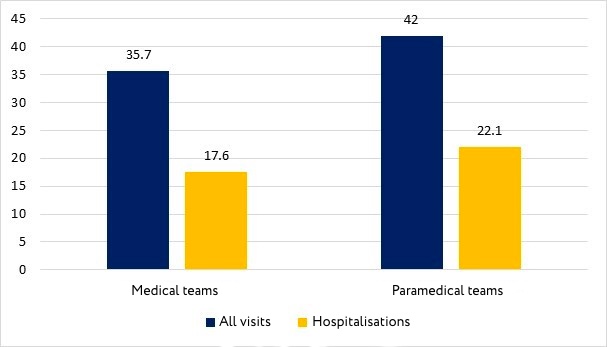 In villages, the duration of paramedic teams is significantly longer than in cities, for medical teams the difference is insignificant (Fig. 3). 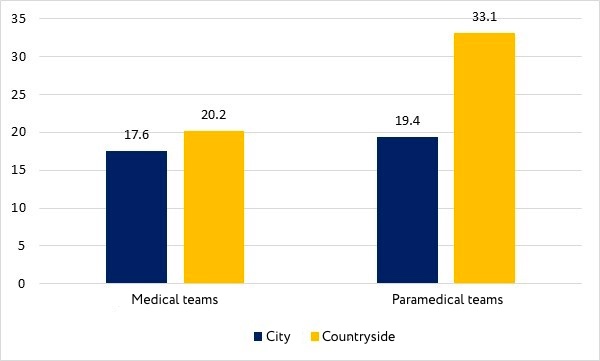 The working time at the scene for unspecified complaints in paramedic crews is longer than in medical teams, in cases of fever during hospitalization is the same, in case of injury / accident in the city the time difference is not statistically significant, but in rural areas. The response time to complaints of respiratory distress during hospitalization is longer for paramedic teams in general, but it is the same in the city. Here the indicators are similar to the cases of signs of stroke.

Thus, paramedic teams usually work on the scene longer than medical teams. The average time of on-site care is 41 minutes, but doctors work an average of 35.7 minutes and paramedics 42 minutes (the difference is statistically significant).

However, there are conditions in which the response time at the scene is the same for both types of teams. These include complaints of fever, respiratory disorders, injuries / accidents in the city, hospitalizations, and strokes in the cities, both in hospitalized patients and in cases that did not end in hospitalization.

Given the stereotypes that exist in the professional environment, we expected the data to show that teams of doctors are less likely to make decisions about hospitalizing patients, especially in conditions that are mostly non-emergency. However, research has shown that medical teams, on the contrary, hospitalize patients more often than paramedics. However, paramedics spend much more time on the scene than doctors. Therefore, it is necessary to develop the skills of paramedic teams in order to reduce time and improve the quality of care.

Unfortunately, the survival of patients who have been treated, including in the hospital stage, cannot be studied on the basis of available data. Also outside the study were factors influencing the professional level of drivers, who are not obliged to help health professionals and, accordingly, mostly do not participate in the provision of such care.

For more thorough conclusions about the impact of the educational and qualification level of the crew on the quality of emergency medical care in the future, it is advisable to combine data from the pre-hospital and hospital stages. This is necessary for subsequent management decisions on the development of emergency care in Ukraine.

The collection of the microdata on the hospital stage in the e-health system have just started. You will be able to use it for analysis next year.