Party Switching: to Ban or not to Ban | VoxUkraine

Party Switching: to Ban or not to Ban

Ukraine is not the only country where party switching is banned. By introducing anti-defection laws, some countries attempt to solve the problem of frequent and dubiously motivated cases of floor crossing that disrupt the political stability and seemingly distort the election results. Yet a high price to pay is a decrease in political competition and the conservation of an underdeveloped party system. Ukraine should lift the ban on party switching, developing instead political mechanisms of MPs’ accountability and considering less stringent institutional limitations.

On March 25, 2016, the Petro Poroshenko Bloc (BPP) decided to strip Egor Firsov and Mykola Tomenko of their parliamentary mandates following their defection from the BPP’s parliamentary faction. The head of the faction Yuri Lutsenko justified this decision by referring to the corresponding provision in the Article 81 of the Constitution of Ukraine and disparagingly characterized the former MPs as “tushkas” (the Ukrainian equivalent of “turncoat”). Yet only a few days later Mr Lutsenko welcomed several former deputies of the “Samopomich” faction into the BPP. This will probably allow BPP and the People’s Front (PF) to form a new coalition without relying on the support of former partners. The response of many politicians to these decisions of the BPP has been negative. For instance, Viktor Chumak argued, “What happened at the congress of the BPP is an example of political schizophrenia. At the moment, no normal country in the worlds employs the imperative mandate”. DW  reminds of the Venice Committee’s opinion on the matter: “The complete dependence of the individual deputy on the party or electoral bloc is not compatible with the role a deputy has to play in a free parliamentary system.”

The effective ban on party defection in Ukraine undoubtedly strengthens the power of the parties’ leadership and decreases the independence of MPs. However, is such a provision necessarily undemocratic?  How widespread is party switching in other countries and what consequences does it have? How can the negative effects of party switching be mitigated without the introduction of controversial laws?

Anti-defection laws in other countries and their raison d’être

As of 2011, 40 countries had the laws that prohibited party switching. Freedom House classified 12 of them as free, 21 as partly free and 6 as non-free. Though there are only several countries among them with relatively long-term democratic traditions, these countries are by no means exclusively authoritarian. The prohibition of party switching is not a direct manifestation of the undemocratic nature of a state. As a rule, these provisions are an attempt to solve the problem of too frequent and dubiously motivated cases of floor crossing that weaken mostly opposition parties in the systems that are prone to the excessive concentration of power. For instance, party switching in Zambia has put the very existence of many opposition parties into doubt. In some case, defections distort the election results and can provide the votes necessary to create a new government, as it happened, e. g. in India in 1967 and 1968, which later led to the introduction of anti-defection laws. In Ukraine, tens of MPs defected from their factions in 2006-2007 enabling the Party of Regions to secure a supermajority needed to change the Constitution shortly before President Yushchenko dissolved the Parliament. Mass defections of opposition parties MPs after 2010 considerably changed the balance of power in the parliament as well.

The Parliamentary Assembly of the Council of Europe, which mostly includes the representatives of democratic countries, has recognized the existence of the problem. For instance, a recent report by one of the committees stated that “Switches in political affiliation after elections therefore raise questions and criticisms – in particular in ethical and moral terms – relating to political opportunism, potential threats to public confidence in the political class and the internal discipline of political parties.” Noting that, at that time, almost no member of Council of Europe prohibited party defections, the Report invited the national parliaments “to look in depth at switching of political affiliation by members so as to determine whether measures should be taken to restrict switching between political groups”.

Party switching occurs in developed democracies as well, though not at such a scale. According to the terms used by Yuriy Lutsenko, probably the most famous “rat” (“tushka), or indeed a  double-rat, was Winston Churchill, who switched factions twice (!). In 2001, the Democrats gained control over the U.S. Senate after a Republican senator left his faction. In 1996-2001, one in four Italian MPs defected from their factions, which reflected a profound transformation of the political system in the country. Nevertheless, party switching is allowed in these countries. Why? 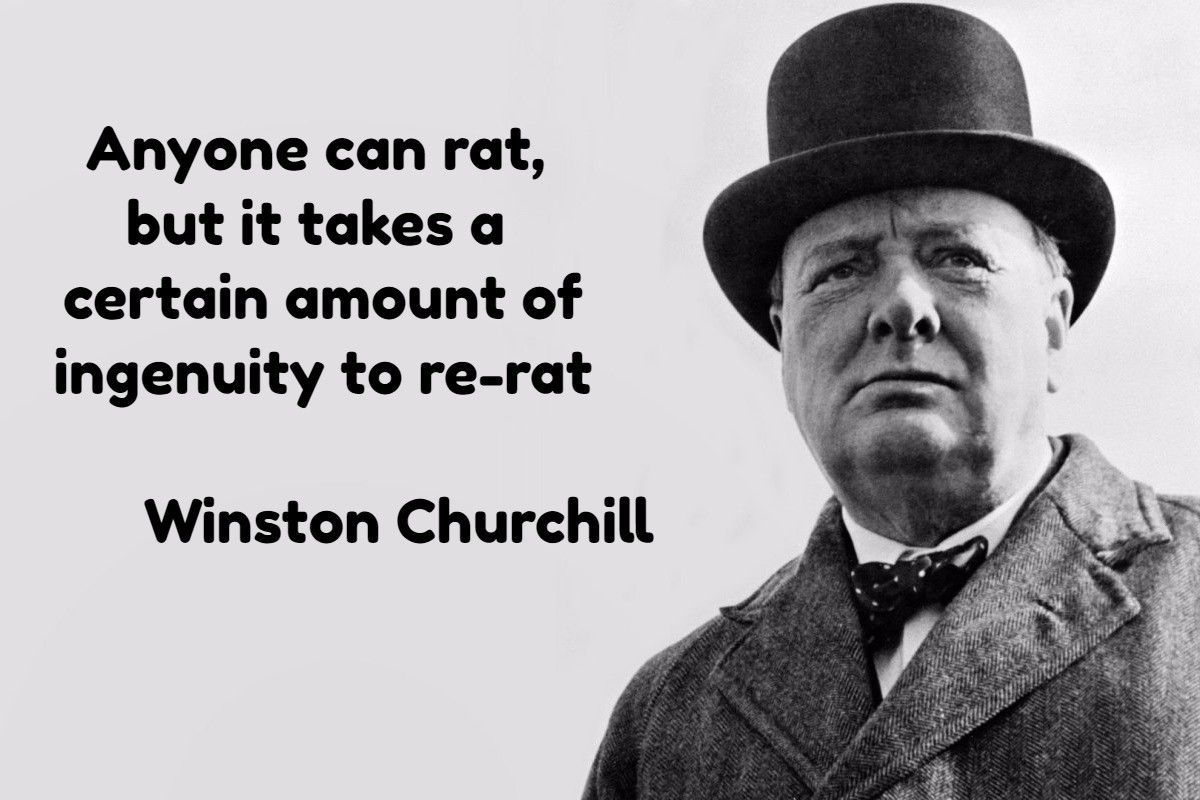 First of all, their political and legal tradition is based on the idea of free mandate and includes certain unwritten rules of parliamentary behaviour. Moreover, both parties and individual MPs usually benefit from party cohesion. In the last decades, parties have become the main mechanism of accessing political power in these countries. Because of internal cohesion, parties are able to act as independent political players and compete for power and related positions and influence. In return to the adherence to the party discipline, deputies receive their party’s support at the elections and access to positions and policy-making. Party systems are relatively well consolidated and parties have certain ideological foundations and/or represent the interests of certain social groups, which helps voters navigate among party labels with ease. If an MP decides to defect, he should have some very good reasons to do so. As the Council of Europe Report points out, «few parliamentarians are willing to commit political suicide” by leaving their party’s parliamentary faction. Defectors face the danger of losing the trust and support of other politicians and voters, and thus risk ending their political career. Voters often view defections unfavourably, though they are more likely to accept a defection, if it is made for ideological reasons. Therefore, potential defectors have to take into account the possible negative reaction of voters and political parties. Party switchers are often motivated by a conflict within the faction, lack of prospects in case of staying, large-scale changes in the political system etc. At the same time, a decentralised economy and the rule of law make defections due to political pressure or corruption almost impossible.

However, even developed democracies do impose certain limitations on party switching. For instance, in some countries defectors lose leadership positions or membership in parliamentary committees or international delegations (Austria, France, Canada, Bulgaria, and Croatia). Another important safeguard is the ban on joining another faction after defecting. For example, in Belgium, Estonia, Portugal, Bulgaria, defectors are required to remain independent until the end of the electoral term.

Why can the complete ban on party switching damage the political system?

Party switching can ensure a better representation of voters by the parliament, helping to swiftly reflect substantial shifts in the electoral support. For instance, the People’s Front faction would have probably lost many MPs, if party switching were legal in Ukraine. Some MPs could proactively respond to a sharp fall in the party’s electoral support (by 90%) by defecting. Better representation could increase the confidence voters have in the parliament and its policies, since its structure would better reflect the attitudes of the people. The experience of other countries seems to reinforce this proposition. For example, numerous parliamentary defections in South Africa, despite seemingly distorting the electoral results, actually served as a correcting mechanism: the following elections proved that the parties that suffered most from defections lost most of electoral support. Therefore, party switching can sometimes ensure a higher democratic quality of the system, since it provides voters with the opportunity to influence the parliament systematically, and not only once in 4 or 5 years at polling stations.

Certainly, no party in a democratic system can have a monopoly on truth. This is even more so in personalised, centralised and nontransparent Ukrainian parties. An imperative mandate muffles political debate, inhibits political competition and helps maintain the flawed nature of political parties in Ukraine. Assuming that parties compete for “high quality” MPs who have relatively high levels of support, lifting a ban on party switching could force parties to become more transparent and less tolerant of internal corruption. If the nature of existing parties failed to improve, such quality deputies, e. g. from the Eurooptimists interfactional group, could offer an alternative by creating their own faction and laying a foundation for a political party. Alternatively, they could draw attention to their parties’ flaws and demand action by credibly threatening to defect.

It is difficult to guarantee the efficiency and impartiality of anti-defection laws. For instance, in Sri Lanka, party switching is allowed only if a certain percentage of a party’s deputies leaves at the same time. This provision clearly favours ruling parties, since it makes a defection from smaller opposition parties easier, while effectively ruling out defections from large parties. In Ukraine, an MP will lose her seat after defecting. Yet she can keep it, if she votes against her faction, but does not defect from it. While an open and motivated defection is punished, this trick would help to circumvent the ban. The aforementioned actions of the BPP serve as another example of double standards.

To ban or not to ban?

On the one hand, there is a problem of dubiously motivated defections in Ukraine, which distort the election results and damage the confidence people have in politicians and in the political system in general, thus putting the viability of parliamentarianism at risk. On the other hand, a ban on party switching encroaches on political freedoms and preserves the flaws of the party system. How can this dilemma be solved?

Given the considerations above, the ban on party switching should be lifted. The following factors could help mitigate the scale of party switching and its negative effects:

By enacting a ban on party switching, some countries try to solve the problem of too frequent and dubiously motivated defections. Yet the high price to pay for such a decision is a decrease in political competition and the preservation of an underdeveloped party system. Sustainable democracies do not employ strict anti-defection provisions, because their political traditions and the objective importance of party discipline mean that a defection can be fatal to the defector’s political career. Ukraine should strive for the emergence of similar mechanisms of political accountability. It is important to realise that no ideal and quick solution exists. There would be more of dubiously motivated defections in the future. However, above all, Ukraine needs the development of transparent political parties, based on free association, which would vote together on the most important matters. Free political competition is a necessary precondition. Therefore, the ban on party switching should be lifted. Yet in order to limit the negative effects of party switching, the introduction of less strict institutional stimuli should be considered. They should be aimed at increasing the cost of defection and enhancing the party discipline without limiting the rights of politicians. A possible interim solution may involve the requirement for a defector to sit as independent until the end of the electoral term.