The first concern of any government is staying in power. In democracies, this is done by appealing to voters. As a result, democratic governments have incentives to pursue short-sighted policies. These policies focus on immediate benefits, even if there are negative future effects. Being a democracy, Ukraine has seen many instances of such policies over its rather short history of independence.

One example is maintaining a fixed exchange rate regime with occasional abrupt devaluations. This policy lasted until late 2014 when it became no longer sustainable because the central bank reserves were practically depleted (Figure 1). Another example is Ukraine’s constant budget deficits – even in times of strong economic growth. This has led to accumulation of government debt. Each Hryvnia devaluation greatly increased debt-to-GDP ratio because over 60% of government obligations is denominated in foreign currency (Figure 2). 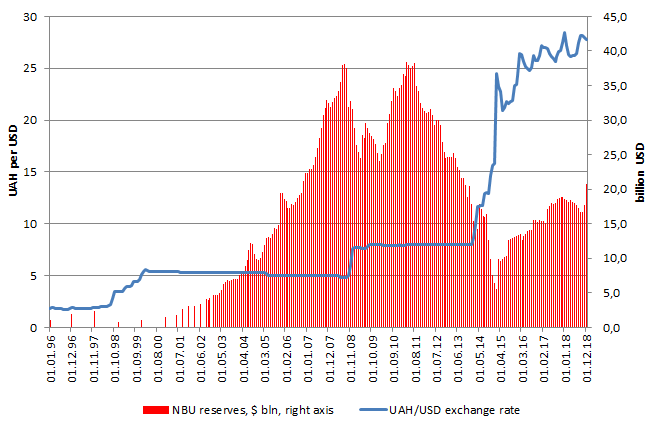 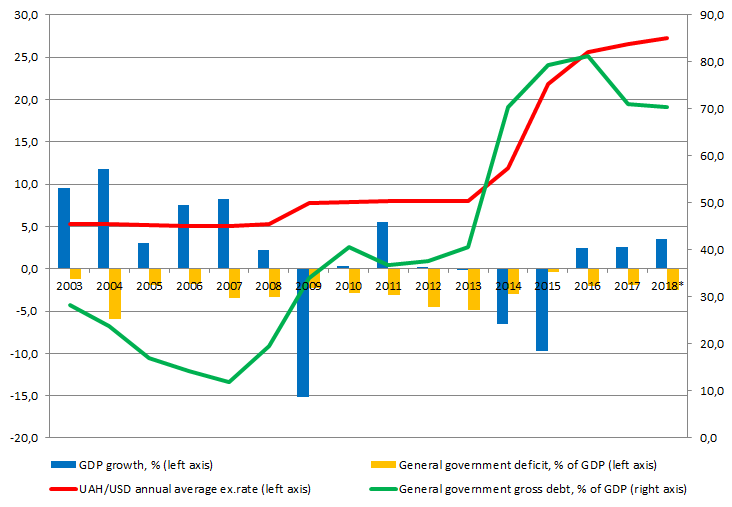 Yet another example is the long-promised equalization of natural gas tariffs for industry and households. It was included already into the 2008 IMF program. This program was enacted to save Ukraine from the consequences of the world financial crisis and foresaw a number of economic reforms. Contrary to its promise, the government kept gas prices for households about three times lower than for the industry. This resulted in a deficit of state-owned monopoly Naftogaz of about 5% of GDP in 2013 and in 6- to 10-fold tariff rises during 2014-2016. Under the next program with the IMF (EFF, 2015) the government again promised to keep household gas prices at par with import parity. However, in 2017 it failed to keep its promise. This resulted in the suspension of the IMF tranche and, consequently, a much higher price at which the government raised money to finance the budget deficit.

Lower household tariffs appease an important group of the voters. Yet, they create risks for macroeconomic stability. They also undermine the Ukraine’s effort to attain energy independence (from Russia) and launch a proper gas market, in line with the EU Third energy package.

Of course, such short-sightedness is not specific to the government of Ukraine. In fact, the democratic governments should not be blamed for pursuing myopic policies. They act in their best interest, implementing the policies that will maximize their chances of winning the next election.

This problem has been long understood in economics and political science. The classic argument goes as follows. To win the elections, governments have incentives to stimulate the economy or give out rents to voters. They can achieve this, for example, by providing tax breaks, subsidies, or distorting prices. They do so even if the longer run consequences for the economy are negative. Potentially, tax or subsidy stimulus might intensify economic activity and lower unemployment in the short run. Eventually, however, the effect of fiscal stimulus will fade out. And the [next] government will be left with higher prices, higher debt, lower revenues and/or higher social obligations.

There is an accepted way to solve this problem in developed democracies. The idea is to balance out government power by independent regulators. These regulators should be protected from immediate political influence, such as an ability to fire the regulator at any moment. Hopefully, this protection will help them to internalize a longer-term perspective. A critical ingredient in this approach is that regulatory appointees should be technocrats who aspire to improve public welfare.

One frequent example is establishing a professional and independent central bank. Independence here means that the bank’s leadership is difficult to influence politically. This type of the central bank can threaten to offset excessive fiscal stimulus or even distortive economic policies with higher interest rates. A threat of high interest rates will nudge the government to be more responsible. An alternative is for the fiscal (state budget) rules to be accompanied by mechanisms of their enforcement.

Independence of institutions can be also strengthened through judicial reform. In developed democracies, judicial system serves as a check on the executive and legislative branches. It protects institutional rules. It can also resolve political disputes in extraordinary circumstances. One example is the Supreme Court of Ukraine’s decision to re-run the second round of presidential elections in 2005. This decision followed the mass protests triggered by large-scale falsifications of election results. It is likely that without the Supreme Court’s intervention, there would be a further escalation of crisis and, consequently, deterioration of institutions.

In practice, there are challenges to these mechanisms. Political independence sounds great in theory. But it is extremely difficult to implement in practice. In developing democracies, with the weak rule of law, regulators are subject to all kinds of informal pressure. Similarly, the efficacy of the IMF insistence on removing political considerations from policy decision-making is tenuous at best. If the government is doing relatively ok, it can postpone meeting the IMF requirement without completely breaking off the relationship. Furthermore, the IMF might be limited in its ability to not renegotiate and accept the weaker conditions from the government. And the justices on the Supreme Court can be blackmailed by the law enforcement agencies controlled by the executive branch. We have observed all of these ingredients in Ukraine – informal pressure on judiciary and regulators as well as postponing and renegotiating conditions with the IMF.

The world, however, is not black and white. Today, some of the Ukrainian regulators are much more professional and politically independent. We see the results in their policy decisions. The National Bank of Ukraine, for example, has repeatedly increased interest rates in 2018 (Figure 3). This was done despite very explicit dissatisfaction by many powerful politicians. Similarly, the Ministry of Finance continues to implement mid-term (longer-term) budget process. This is done to increase the time horizon of the fiscal policies. It will also make more difficult to renegotiate the budget and abandon discipline prior to the elections. Finally, Ukraine has managed to continue its relationship with the IMF after an excessive delay.

Figure 3. Inflation and the National Bank of Ukraine policy rate 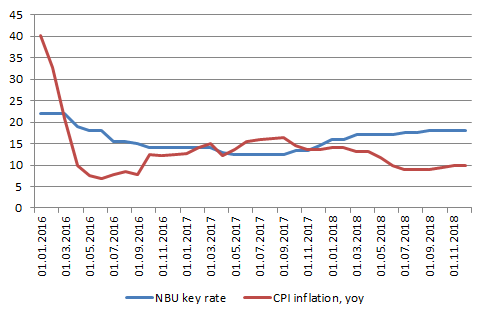 So, checks and balances in the Ukrainian economy slowly start to work. Nevertheless, we have a long road ahead.

One important issue to concentrate on in the next few years is the judicial reform. The relevant legislation was adopted in 2016, and now the most important part – its implementation – is ongoing. Today, the judges for the newly established Anti-corruption court are being selected, and judges to other courts undergo the re-evaluation procedure. There can be a temptation on a side of politicians to either slow down these processes or intervene with them (because courts play a role in the election process). Thus, the Ukrainian society and international partners should closely watch the process – because establishment of a quality judiciary system is in the best long-term interest of the country.

Institutions do not become strong overnight or even over several years. We must learn to maintain independence of our regulators. We should continue to instill them with professionals. Transparency of the policy-making should become a paramount norm – so that the public can catch deviations from the sound policies that serve short-term objectives of politicians.