Holidays, start of election races, general uncertainty have influenced work of the Parliament. Deputies worked very slowly and passed twice as fewer draft laws as in the last quarter – only 15 against 30 at the end of 2018. Among #wins of the first quarter of 2019 – subsidy’s monetization, electronic prescriptions, fight with the tax base erosion by companies, cancelling of a complaints and suggestions book. But there is also a huge #betrayal – annulment of the Criminal Code norm about unjust enrichment.

What has changed for citizens?

Now prescriptions are in an electronic form

The government updated the program “Affordable drugs”. From April 1 doctors have to prescribe drugs in an electronic form, and it will be possible to get drugs with the help of a number from SMS in any pharmacy which takes part in the program.

Resolution of the Cabinet of Ministers from February 6, 2019, №62 defined the order of getting monetized subsidy. Now it is possible to get “real” money for economy of communal public services. Pensioners will get them together with their pensions, other receivers of subsidies will get them in branches of “Oshchadbank”. Those citizens who received money but did not pay for communal public services on time, will be left without subsidies until they pay their debt.

New rules of marking for food products have been implemented

It is stated in the law 2639-VIII from 06.12.2018 that now producers of food products have to indicate contents of food additives or products which can cause allergic reactions.

What has changed for business?

Price regulation on medical products has been cancelled

Resolution from March 6, 2019, №184 cancelled limitations about 10% mark-up on wholesale-selling price while purchasing drugs, medical materials, instruments, implants or equipment for hospitals. Cost of post-selling service often was higher than 10% from a price, thus suppliers either used shadow systems to circumvent restrictions or did not take part in purchasing. It is expected that now competitiveness at the market will grow, drugs assortment will become wider, and there will be no need in shadow schemes.

Resolution from March 13, 2019, №215 made accreditation of medical institutions not compulsory and simplified process of its obtaining. Now it is possible to undergo accreditation right after obtaining a license, without waiting for two years, and provide a shorter set of documents. Accreditation gives a range of opportunities for institutions: to issue sick leave notes, provide services in reproductive medicine and transplantation, conduct clinical investigations.

This innovation is beneficial for conscious tax payers.

Not to tax income of those companies which work with other countries twice, Ukraine signed treaties about avoidance of double taxation with 74 countries. However, with time such treaties lose their topicality in some aspects, and unconscious payers can use present “gaps” to decrease sum of tax.

In February 2019 the Parliament passes the law 2692-VIII about ratification of MLI Convention (Multilateral Instrument). It allows to introduce changes to treaties about avoidance of double taxation in a fast way and with minimal losses, thus covering tax “gaps”.

Mandatory usage of “complaints and suggestions book” has been cancelled

“Complaints and suggestions book” is an archaism from Soviet times, which has long stopped playing significant role in protection of consumers’ rights. Resolution from March 6, 2019, cancelled a requirement to have these books.

What bad things have happened?

Norm about unjust enrichment has been annulled

Prehistory. Criminal responsibility for unjust enrichment was introduced in Ukraine in 2011. The Parliament has several times clarified formulation of a corresponding article (368-2) of the Criminal Code.

In new versions of 2014 and 2015 the norm about unjust enrichment was in compliance with international recommendations (1, 2). In particular, such changes of the law were a part of responsibilities which Ukraine took within the framework of cooperation with IMF in the 2014 Memorandum.

What has happened. In December 2017 59 parliamentarians appealed to the Constitutional Court with a proposal that the article of the Criminal Code abut unjust enrichment contradicts a range of constitutional norms (at the same tome analysis of these norms, conducted by the EUAM, had not found violations).

Pace of reforms in Ukraine has decreased

Pace of reforms in the first quarter was the lowest for all times of the Index for Monitoring Reforms existence. Average value of the IMoRe stood at +0.46 points from possible (-5, +5). In the previous quarter the Index stood at +0.61 points.

You can find the whole version of reforms review by the link.

Graph 1. Index for Monitoring Reforms since 2015 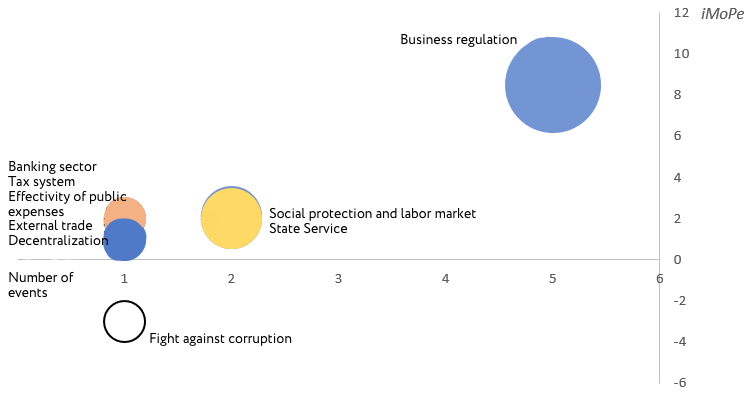 About IMoRe. Since the beginning of 2015 around 40 experts once in a fortnight has evaluated legislative acts which change “rules of game” in economics. On the IMoRe website you can find detailed evaluations, description of events and experts’ commentaries.