Putting the Best Foot Forward: Tobacco Products at the Points-of-sales

On the 12th of April the Committee of the Verkhovna Rada of Ukraine on Public Health recommended to adopt in a first reading a draft law №4030а that provides for the prohibition of tobacco products’ open display at shop-windows. On the eve of the new political season, it is possible to assess the effect of implementing that law, using the research, conducted by the Kyiv School of Economics.

International practice on the regulation of tobacco products’ layout is summarized in this article. An assessment of economic repercussions from such actions for EU is presented. Potential consequences for Kyiv are explored.

The results of the research conducted by the Kiev International Institute of Sociology demonstrated that 68% of the Ukrainian citizens approve of the prohibition of cigarettes’ open display at shop-windows. But do the participants fully understand the impact the implementation of their wishes will have on them and on the life of the Ukrainian society as a whole?

Regulation of tobacco products’ layouts at the points of sale is a recent tendency even in the developed countries. Up to now only 18 countries have legal regulations in this sphere. The leaders are: Canada, Australia, Iceland, Ireland and USA. Moreover, such exotic countries as Nepal, Trinidad and Tobago are also included in this list.

No wonder that the effectiveness of such restrictions provokes fierce discussions every time they are made. Initiators of regulation appeal to its positive effect on smoking decrease and complimentary decrease in the spread of related diseases. Enemies of regulation, that usually consist of tobacco manufacturers and affiliated organizations, do not agree with the above-mentioned hypotheses. Both sides ground their positions with analytical materials. So, who is right?

A layout of wares at a point-of-sales – is a placing, positioning and demonstration of wares at a shop-window, shop fittings or any other place at a shopping space used for display and is an instrument of sales stimulation. Usually, it is accompanied with an attractive and bright dressings of a shop-window, checkout areas and separate pallets.

Firstly, the effects from the presence of tobacco products’ (TP) layout and from the prohibition of such should be clearly distinguished.

In the first case, the researches that were conducted as far as by the November of 2016 definitely demonstrate that an open display of TP stimulates their consumption in one form or another – starting by complicating giving up smoking and stimulating spontaneous purchases, and ending with inclusion of new consumers. The example of younger age groups is the most prominent in that regard. The mechanism is quite simple – a man sees a ware or its model, decorated attractively, and acquires a desire to buy it. And the more tat man is open to influence, the stronger is the effect (Spanopoulos, 2012).

In the second case, the effect is not so clear. Currently, there is a limited number of researches that explore this problem, and they mainly consider the developed countries, such as the USA, Canada and Great Britain. Methodology largely varies – starting with large-scale macrosimulations and ending with the experiments with virtual shops.

Accordingly, there is a difference in the uncovered effects. Levy (2015) in the USA and Irvin (2014) in Canada have conducted the most complex researches that assess the impact on the smoking situation. It was shown in the first work that a systematic approach to the prohibition of tobacco products’ layout (implemented in 2015) will ensure a decrease in smoking prevalence on 16% as of 2065, in comparison to the basic scenario without such limitations. Such policy is expected to be able to prevent 630 thousand smoking-related deaths, 1900 deaths of new-borns, 215 thousand births of preterm infants and 140 thousand of preterm deliveries.

Irvin (2014), used the data of the yearly tobacco consumption in Canada, came up with somewhat different results. He assessed the influence on smoking initiation, its intensity and ability to make a decision to stop smoking during the limitations that were effective from 2004 to 2009 in Canadian provinces. The analysis demonstrated that as of 2014 (after 5-10 years after the limitations were implemented) there were no significant changes in smokers’ behaviour. The intensity of smoking among the youth (age group from 15 to 24 years) has been the only affected factor. With the limitations on tobacco products’ layout, the amount of cigarettes consumed by the youth decreased on 7-10%.

Li (2013) in the research based on the International Tobacco Control Four Country Survey, that is regulary conducted in four countries – Canada, the USA, Australia and Great Britain – since 2002, came to the following conclusion: in Australia and Canada even a gradual implementation of the limitations on the tobacco products’ layout decreased considerably the sensitivity of consumers to the tobacco products. The prohibition of cigarettes’ layout has a considerable influence on the behaviour of consumers – the spontaneous purchases become rarer if it is implemented.

The research conducted by the Kyiv School of Economics included meta-analysis – a generalization of the researches that have been already published. The cornerstone of this method is the selection of applicable works.

The search of researches for analysis was carried out in the period from October to November of 2016. The initial search was conducted by using GoogleScholar, Jstor and ScienceDirect platforms, following the keywords “Tobacco”, “Display ban”, “POS”, “Point-of-Sale”, “Smoking”, “Point of Purchase”.

A research is considered applicable if it contains both respondents’ self-assessment of how frequent they visit shops, buy cigarettes and so on, and objective observations of cigarettes’ layout (visitation of points-of-sales, that contained tobacco products, knowledge of the layout prohibition and so on).

Decisions to start or to continue smoking, as well as spontaneous purchases, are used as a dependent variable. Only the researches based on observations were included in the final sample – experimental researches and simulations[1] were deemed unsuitable for getting realistic conclusions. The final sample contains almost 66 thousand observations at individual level. For more information on the list of discovered and selected researches, follow the link.

Figure 1 demonstrates the results of meta-regression – a joint assessment of chances of being or not being a smoker (odds ratio) constitutes 0,76. The result of the meta-research demonstrates that the probability of beginning or continuing smoking is 23% lower for people not affected by the TP displayed at the points-of-sales. In other words, that means that the probability to start or continue smoking for a man who is not influenced by TP layouts at the points-of-sales is 23% lower than if TP are displayed.

Figure 1. The results of meta-regression 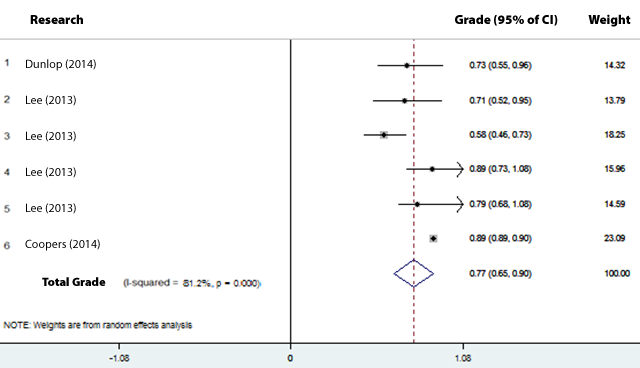 While the prohibition of tobacco products’ layout likely will positively influence the decrease in smoking, there is an another side to this measure – the economic effect. A technical report of an analytical centre RAND EUROPE “Assessing the impacts of Revising the Tobacco Products Directive” (2011) has the most thorough examination of the potential influence of the different regulative measures on tobacco trade (including the limitations of layouts).

An assessment of potential scenarios of the Directive 2001/37/EU was made in this article. Despite confirming again the significance of the limitations on open display of the TP at the points-of-sales, the negative impact on the whole production chain was strongly highlighted. Potentially, it may cause a decrease in the amount of working places on 0.1% for EU manufacturers, 1.7% for EU wholesalers and 0.3% for EU retailers. The income and profit of the tobacco industry will decrease (on 51 million and 11 million euro respectively). The impact on taxation can hardly be determined (assessments show numbers from minus 94 million to 1371 million euro in 2027, in the prices of 2007). Additional decrease in medical expenses was estimated as 46 million euro.

In the Ukrainian context, the most harm from this regulation may come to temporary structures (TS), better known as Small Architectural Form (SAF). Such kind of structures is the best example of the usage of the special methods for wares’ display (Figure 2). Almost all tobacco products are displayed directly at the checkout (shop-window) area (94%). Illumination of the wares is used most proactively (88%), as well as boxes and panels (70%), designed in a bright and attractive style (80%). Less often are used the big cigarette packs – the moulages of the real brands. 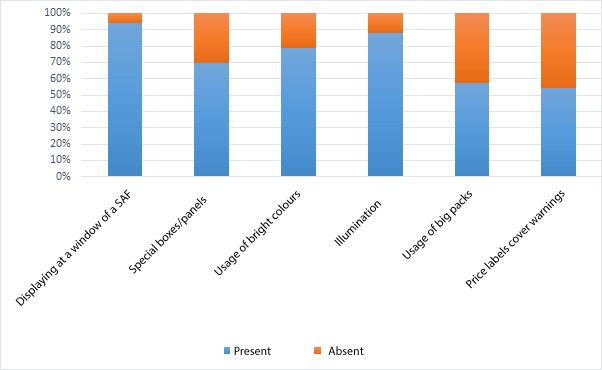 However, the main method is the “carpet bombing” of a consumer – in the majority of TS tobacco products have more than half of a shop-window.

The price of the question

According to the Department of Urban Development and Architecture of Ukraine, 1148 legally arranged TS (18%) had functional purpose “Trade of tobacco and alcohol products” as of October 2016. On the other hand, monitoring and poll that were made by the Kyiv School of Economics showed that there are 3 times more of similar points-of-sales.

According to the poll, the points-of-sales are strongly dependant on the sale of TP: it constitutes 75% of income in the half of TS, and from 75% to 50% in one third of them (Figure 3).

If the assessments of the Kyiv School of Economics are to be used, then TS that trade TP create around 9.5 thousand working places just in Kyiv (6 thousand of which belong to the illegal structures). At the national scale the effect is going to be greater.

Figure 3. The weight of tobacco in TS’s income 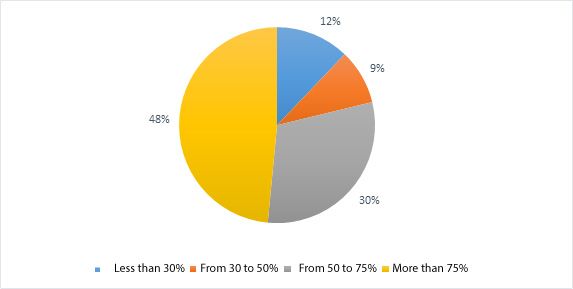 Currently, the discussion about the regulation of tobacco products’ display has more of a moral-subjective character and comes down to the black-and-white format of “Good&Evil”. Unfortunately, the dispute around the question that is going to have, unquestionably, economic consequences, has no economic component.

In contrast to the EU Directive, the Ukrainian draft law has no financial-economic assessment, noting that its realization needs no financial expenditures from the state budget. A similar situation is with the forecast on social-economic consequences, while the analysis conducted in the EU showed a negative effect on the employment rate.

Without a high-quality economic analysis – an assessment of the price our society will have to pay and, accordingly, of the benefits that it may get, it is hard to make a proper conclusion on if it is worth the effort.

[1] Simulations and experiments came down to the creation of an online-shop, where people were shown pictures and then marked their desire to smoke. Those were not experiments with real wares so they were not included in the research.