The Reform Index’s 185th issue (June 20 – July 17*) comprises 16 changes that may influence the “rules of the game” in thе country. Of them, two are ant-ireform: laws on tax and customs incentives creating favorable conditions for industrial parks. Overall, during this period, the Reform Index reached a value of +1, within possible values ranging from -5.0 to +5.0. In the previous issue, the Index was +0.8 points.

*In connection with the war in Ukraine and the state’s change of focus to wartime needs for the period of active hostilities, we have changed the period of monitoring regulations for the Index for Monitoring Reforms from two to four weeks. 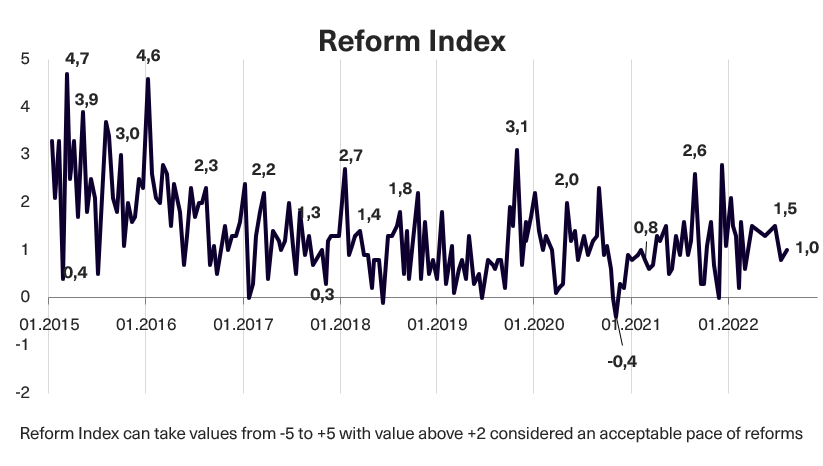 After the many years of attempts, Ukraine passed law 2319-IX ratifying the Istanbul Convention and joined the 35 countries that ratified it earlier. Great Britain ratified the Convention almost immediately after Ukraine.

The convention not only obliges signatory countries to criminalize gender-based violence (forced marriage, forced sterilization, stalking, etc.) to enshrine the principle of equal rights for women and men in legislation but also offers tools to prevent violence. These include information campaigns to raise public awareness of various forms of gender-based violence, adapted material used in the educational process, training specialists to deal with victims or perpetrators of any acts of violence falling under the Convention; and preventive intervention and treatment programs and programs involving businesses and the media in preventing violence against women and increasing respect for their dignity.

Countries ratifying the Convention undertake to collect statistics on instances of all forms of violence falling under the Convention to monitor its implementation’s effectiveness.

On June 29, Minister of Infrastructure Oleksandr Kubrakov signed on behalf of Ukraine an agreement with the European Union on cargo transportation by road. It cancels out the need for Ukrainian carriers to obtain permits for bilateral and transit transportation through EU countries, accelerating the movement of cargo transport across the border. The agreement is especially helpful now when Ukraine has lost the capability to transport goods by air and partly by sea due to Russia’s invasion, which has increased the demand for road transportation.

Besides, according to the agreement, Ukraine and the EU will mutually recognize driver’s licenses issued by one of the parties. Therefore, Ukrainians will not need international permits to drive a car in the EU.

Law on improving the provision of medical care, +2.0 points

Law 2347-IX takes another step in reforming the healthcare system. In particular, it unites the secondary and tertiary tiers of medical care into specialized medical care, improves the functioning of hospital districts and provision of palliative care, and creates the basis for reimbursement for medicines. Another practical development is the amendments to the Civil Code, requiring criminal offenders to compensate the state budget for the costs of victim’s treatment.

The law also expands the powers of the Cabinet of Ministers. The latter now has the right to set the minimum wage for healthcare workers. On the one hand, it is an important step to encourage doctors and nurses to stay in medicine. On the other hand, it undermines the autonomy of hospitals, affecting their financial model.

Technical and vocational education can be obtained for a second time for free, +2.0 points

According to Kyiv School of Economics, at least 388 Ukrainian enterprises have been damaged, destroyed, or seized since the beginning of the full-scale russian invasion. This means the loss of jobs and a decrease in demand for certain professions (e.g., metallurgical production has halved) and brings the need for Ukrainians to retrain for jobs that are more in demand on the labor market. In order to facilitate this process, the Verkhovna Rada adopted Law 2312-IX, making it possible to get vocational education for a new profession, for a second time for free if at least three years have passed since the completion of the first one, if one has a pensionable service record, and if the educational institution has vacant study places. However, applying for free vocational training even earlier and without pensionable service records is possible if person cannot work in he r/ his previous occupation due to health conditions or if a new profession is needed to meet the state’s immediate needs.

Since Ukraine’s information resources have been subjected to constant attacks by russia, it became necessary to secure Ukrainian electronic resources and registers. To this end, Law 2130-IX enables owners of state information resources to conclude technical administration agreements with foreign cloud service providers.

Owners are also tasked with creating backup copies of state information resources in separate physical media in encrypted form and ensuring their safe storage. It can also be done in other countries: in Ukrainian foreign diplomatic institutions during martial law in Ukraine and six months after its lifting.

It is forbidden to use cloud resources and store backup copies in the occupied territories or in aggressor states and countries that are part of customs and military alliances with the aggressors.

Qualified electronic trust services provided in the EU will be recognized in Ukraine’s banking and payments spheres (+0.5 points)

Ukraine’s decision to recognize e-signatures and qualified electronic seals created in the EU significantly simplifies interaction between the European and Ukrainian banking systems.

In this issue, we also spotted two anti-reform regulations having to do with another attempt to support industrial parks. A few years ago, VoxUkraine’s editorial board wrote about why the benefits would not turn Ukrainian industrial parks into a new Silicon Valley.

The Verkhovna Rada adopted changes to the Tax and Customs Codes to create favorable conditions for attracting large-scale investments into the economy.

The disadvantages of the new norms are, firstly, a reduction in tax and customs revenues in wartime without guarantees of the economy’s genuine revival due to the influence of industrial parks, secondly, distortions created in the market where certain areas get favorable terms at the expense of the comparatively deteriorating terms in other places, and thirdly, an attempt to selectively support some territories and enterprises instead of creating equal, comfortable conditions for all businesses in Ukraine. 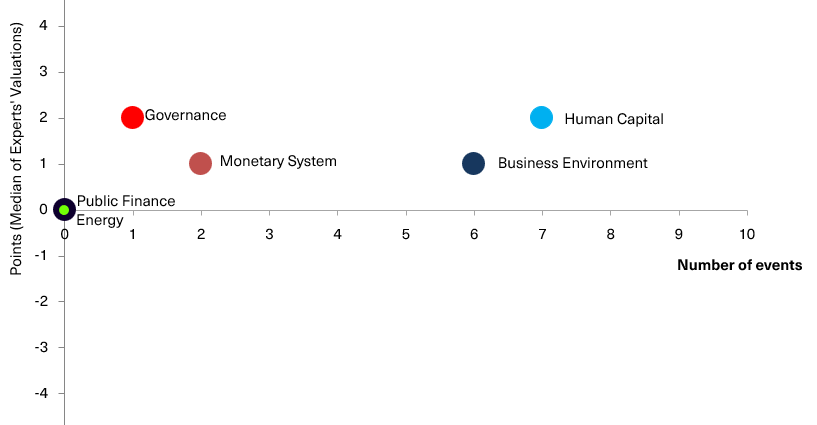