Reforms the government managed to implement several months before the elections

VoxUkraine conducts regular monitoring of the speed of economic reforms implementation in Ukraine. Quarterly reviews provide a “view from afar” on what happened during the three month-period. We are presenting a regular quarterly review of the reforms. This one is for the 3rd quarter of 2018. Click the link to see previous reviews (2017-Q2, 2017-Q3, 2017-Q4, 2018-Q1, 2018-Q2).

In the 3rd quarter of 2018, the pace of reforms has slightly increased with the average iMoRe (reform monitoring index) being +0.64 points. In the previous quarter the iMoRe index was the lowest for the whole period of monitoring – +0.51 points (from the values between -5.0 to +5.0) 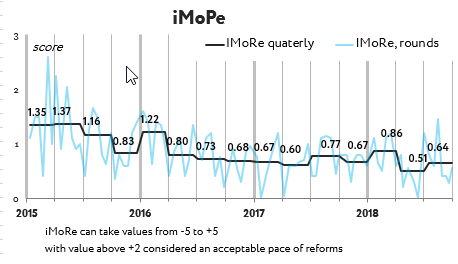 34 regulatory acts, viewed as reformatory by experts, were adopted in the 3rd quarter. Average iMoRe index of these laws and orders is +1.2 points (17 regulatory acts were passed in the previous quarter having an average index of +1.3 points).

In this quarter, the President signed an important law, which eliminated the gap in the law on anti-corruption court with respect to appeal of corruption cases. (iMoRe #87). The gap helped escape punishment in a number of large-scale corruption cases currently investigated by the National Anti-Corruption Bureau. The experts gave a +3.0 index value to this law.

The most important events of the quarter included:

The Cabinet of Ministers initiated 19 forward-looking legislative changes in the 3rd quarter (average index +0.9 points). In particular, they enhanced copyright protection (iMoRe #89) and canceled sugar industry regulation (iMoRe #94). In the previous quarter, the government initiated 6 transformative legislative changes and 1 anti-reform and the average regulatory act index made up +0.6 points.

People’s deputies put forward 6 reformative laws with average index of +1.6 points. The most important of these laws introduce the institution of nominee holder of securities in Ukraine which is widely used in the world and was not part of Ukrainian legislation before (iMoRe #90); create conditions for involving private laboratories in phytosanitary certification (iMoRe #90); eliminate gaps in regulation of collective ownership to land (iMoRe #92). It should be pointed out that in the previous quarter people’s deputies initiated only one reformative law.

The President initiated a law which establishes an appeal chamber for corruption cases iMoRe #90). The law on national security was also initiated by him (+2.0 points) (iMoRe #89). 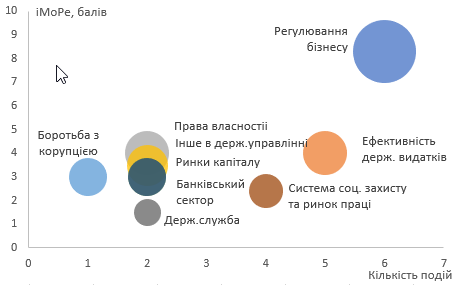 TOP-3 areas of reforms in the second quarter

Key events in this area include adoption of the Law on Phytosanitary Сertification (iMoRe #90), Deregulation of Sugar Industry (iMoRe #94) and the Requirements for Organic Production. (iMoRe #90).

The new Law on Phytosanitary Expert Study (2501-VIII of 10.07.2018) creates opportunities for involvement of private laboratories in the process.

The Law on Sugar Industry Deregulation (2518-VIII of 04.09.2018) tackles the issue of inefficient sugar market regulation.

This regulation was introduced by the law of з1999, which does not meet world and national market conditions any more. According to this, the Cabinet of Ministers was supposed to establish annual quotas for sugar supplies on internal market and minimum prices for sugar beet, which is the raw material for national market sugar production. Such regulation was not only creating corruption risks but was also distorting market mechanisms in the industry. Companies were trying to organize their work in such a way as to avoid regulation. In particular, a significant share of sugar beet (more than 40%) came to factories on give-and-take basis and was formally exempt from the law.

The law No. 2518-VIII cancelled such regulation completely.

The Law on Requirements for Organic Production (2496-VIII of 10.07.2018) is aimed at solving the problem of non-sufficient protection of consumer rights and unfair competition on the market of organic products. Producers of counterfeit organic products were able to retail them easily and were not held accountable for violation of laws in the said sphere.

The new law establishes requirements for the production, turnover and labelling of products and specifies the rights and duties of market operators and certification bodies.

In the sphere of ownership protection laws have been passed to enhance copyright protection (iMoRe #89) and the protection of collective ownership to land (iMoRe #92).

The Law on Copyright Protection Enhancement (2415-VIII of 15.05.2018) is designed to solve the problem of unpaid royalties for the use of works (records).

In reality, authors usually cannot themselves track the way their work (record) is being used as well as hold negotiations on royalty payment for such use and the payment itself. According to the Law on Copyright and Related Rights such procedures are carried out by collective management organizations (CMO). They are authorized to enter agreements with users on behalf of the authors; agree on the amount of royalties; collect, distribute and pay out said royalties to authors. Royalties to foreign authors are paid according to agreements with foreign CMOs.

Authors could not control the amount of royalties collected by the CMO and the CMOs were sometimes abusing their powers. In particular, the space for such abuse was created by the norm which established that royalties not claimed by the author within three years from the day they had been deposited to an account could be used for any purpose foreseen by the charter of such organizations.

The law eliminated the space for such abuse and now a significant share of non-distributed money is transferred for the needs of culture development in Ukraine (except for the sum received by CMO as remuneration for their services). It means that CMOs will not be interested in non-distribution of money. The law also establishes new requirements for CMO operation.

The Law on Collective Ownership to Land (2498-VIII of 10.07.2018) was passed to regulate a number of issues connected to determining the status of agricultural lands which remained in already non-existent collective ownership.

It regulated the issue of ownership to land which remained “with no user” upon parcellation – field roads, windbreaks etc. and created the opportunity for exchange of land plots.

At the same time, experts note some negative aspects of the law. One of such aspects is the so-called right of “essential user” which is the pre-emptive right of user who rents at least 75% of all the lands in the massif, to rent the rest of lands. This creates 1) unequal conditions for small and big producers in favour of the big ones and 2) additional limitation for the owners of land plots (in addition to minimal rent duration and ban on sale/purchase of agricultural lands).

In the sphere of state expenses a number of regulatory acts has been passed which regulate the use of money in support of priority areas of research at the National Academy of Sciences of Ukraine, the activities of Ukrainian Cultural Fund, activities of the Resource Centre for Inclusive Education, concessional loans for vocational and higher education. These regulatory acts were poorly assessed by the experts but the number of acts passed (5) was sufficient.

On the eve of elections, the government is tempted to make populist decisions instead of implementing reforms. For the second quarter in a row, iMoRe is demonstrating low speed in passing reformative regulatory acts. It is important that in the pre-election year the government does not delay the reforms planned.