Russia is not an aggressor against Ukraine: a review of Italian and German pro-Russian media

Russia is not an aggressor against Ukraine: a review of Italian and German pro-Russian media

The structure of the narrative: what fake news constitutes it.

1. Russia is not involved in the war in Ukraine.

The war in Donbas is Ukraine’s internal conflict. Kyiv launched a military operation against Donbas because locals did not accept the results of a change of central power in 2014 (Controinformazione). Russia is not a party to this conflict but only a mediator, and it does not have much influence on the pseudo-republics, i.e., the so-called “LPR” and “DPR” (SNA IT, RT DE). There is no evidence of regular Russian troops operating in Ukraine. Also, there are no pictures of Russian troops, Russian tank columns, or other equipment on the territory of Ukraine (RT DE).

1. Not all Donbas residents were against European integration or the democratically elected Ukrainian government in 2014.

Euromaidan rallies also occurred in the now occupied Donetsk, where activists rallied for three months. The city’s largest rally took place on March 13, 2014, but it was brutally dispersed. Thousands of civilians had come out to support Ukraine (according to eyewitnesses, 10,000 people rallied in Donetsk). Pro-Russian activists staged the massacre and killed 22-year-old activist Dmytro Cherniavskyi during the assault. Official figures said another 36 people were injured. Eyewitnesses said there were more victims.

2. Evidence of Russian troops and military equipment in Donbas is plentiful, particularly from independent international observers. Here are just a few facts:

The OSCE Mission documented the presence of individuals who wore Russian rank insignia in Donbas.

An OSCE SMM report on June 6, 2020, said a long-range unmanned aerial vehicle spotted a convoy of trucks entering Ukraine in a non-government-controlled area of the Luhansk region near the border with the Russian Federation in localities not equipped with checkpoints. InformNapalm, an international volunteer initiative, published pictures of UAVs to confirm this.

In 2018, the SMM published a report stating that an OSCE drone had spotted four Russian electronic warfare systems (a Leer-3 RB-341V, a 1L269 Krasukha-2, and RB-109A Bylina, and an anti-UAV system, Repellent-1). Source: Twitter of the Ukrainian Mission to the OSCE & UN in Vienna

In January 2020, the website of the U.S. Mission to the OSCE stated the OSCE had documented the transfer of military equipment from Russian territory to Ukraine.

NATO also published satellite images of Russian military equipment crossing the Ukrainian border near the city of Krasnodon (Luhansk region), a few kilometers away from the Ukrainian-Russian border: 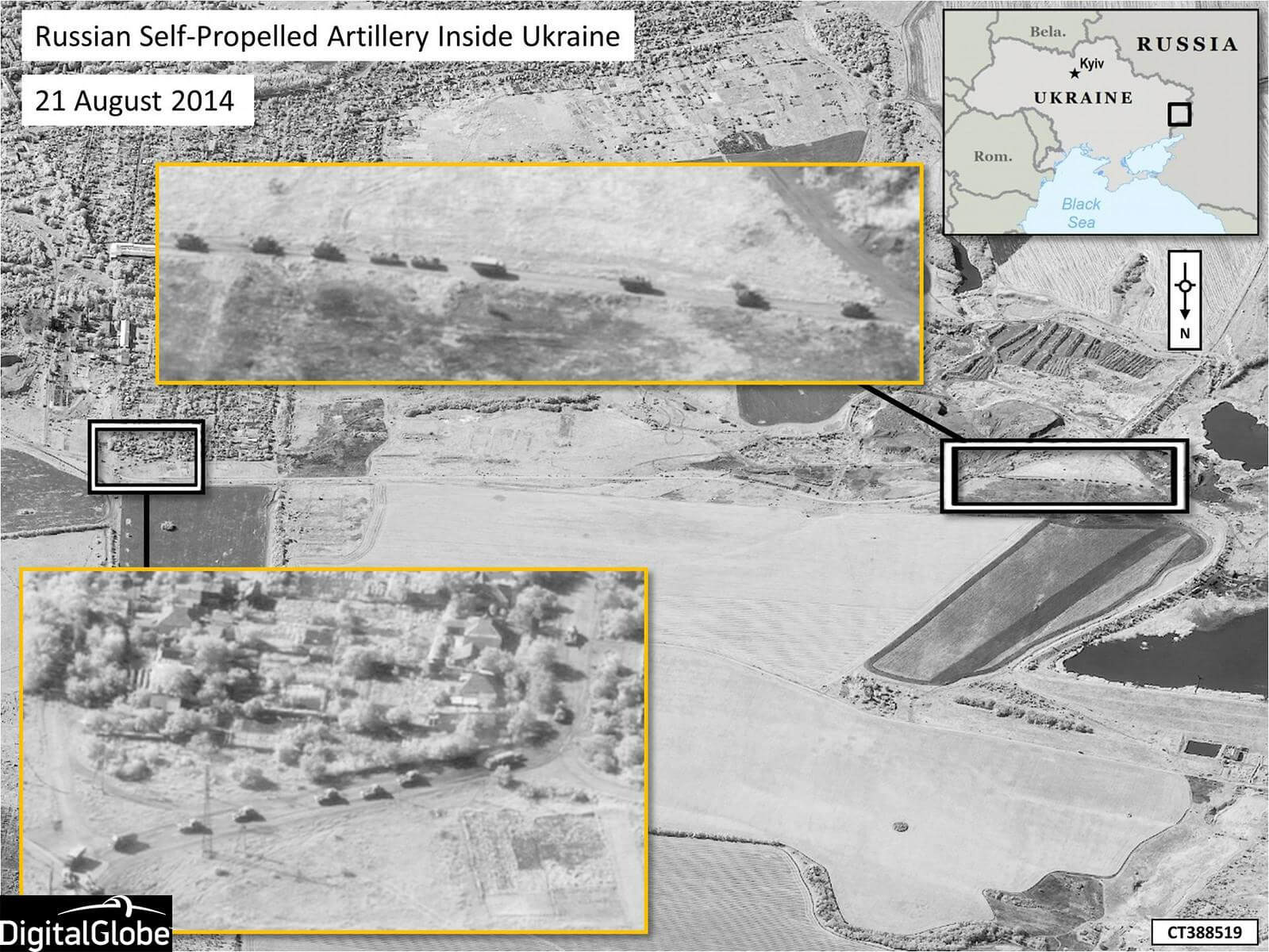 In 2016, Bellingcat published a report saying there were 149 cases of shelling Ukrainian territories by Russia in the summer of 2014. Russia opened fire on 408 objects. One hundred twenty-seven of them were within the three-kilometer border zone. The number of shells fired amounted to thousands and thousands.

According to Bellingcat, nine Russian commanders and officers took part in the artillery shelling of Mariupol on January 24, 2015.

According to Forensic Architecture, a UK-based multidisciplinary research group, T-72B3 tanks were used in the fighting near Ilovaisk in 2014. Only the Russian Federation’s army had them at the time.

The Russian invasion of eastern Ukraine was confirmed by its participants.

Russian officer Igor Strelkov (Girkin), the organizer of separatist rallies Pavel Gubarev, and the head of the special forces department of the so-called “DPR” Dmitry Sapozhnikov confirmed Russia’s being involved in invading Donbas. Russian politician Sergei Kurginyan, who came to Donbas after the beginning of the Russian occupation, admitted that Russia had repeatedly supplied military equipment (according to Donbas.Realities and Radio Liberty project data).

3. Russia fully controls the pseudo-republics “LPR” and “DPR” and the so-called “insurgents.”

DPR and LPR representatives, too, have repeatedly spoken about Russia’s influence in Donbas. For instance, Oleksandr Khodakovskyi, a “DPR” representative, acknowledged Russia was in control over the situation in the “republics” and spoke of “Russian curators.”

Deputies of the State Duma of the Russian Federation also do not deny Russia’s presence in Donbas. Dmitry Sablin, a member of the presidium of the United Russia party’s general council, spoke of “an ongoing experiment in reunifying the Donbas territory with Russia” and of ORDLO having Russian majority constituencies in the next elections.

In 2016, Cyber Alliance, a Ukrainian hacker group, published emails sent to the office of Russian presidential aide Vladislav Surkov. The documents testify to Moscow’s direct governance over the political and economic life of the “DPR” and “LPR.”

In 2019, the Joint Investigation Team investigating the circumstances of the MH17 crash released the recordings of telephone conversations of high-ranking Russian officials, the military, and special services involved in the downing of the Malaysian Boeing. According to this data, the “DPR” leaders were on the phone with their Russian curators almost daily in July 2014. The latter took an active part in governing the “LPR” and “DPR.”

2. Russia did not occupy Crimea; it was a “reunification.”

In 2014, local Crimean authorities refused to recognize the legitimacy of the central Ukrainian government elected after the Euromaidan protests and held a so-called “referendum” on whether Crimea would remain part of Ukraine or “join” Russia (Il Primate National, wsws.org).

The “referendum” was held in line with international law and the UN Charter and even had Western observers (SNA IT). The vast majority of Crimeans voted to join Russia (96.77% of Crimeans and 95.6% of residents of Sevastopol, a city with special status) (SNA.DE, Controinformazione).

The decision to hold a so-called “referendum” was made at a session of the Verkhovna Rada of Crimea on February 27, 2014. By then, the military without insignia had already seized the parliament building. Journalists were not allowed into the hall. Whether there was a quorum for making this decision and how the MPs voted under the barrels of guns is unknown.

In 2015, Igor Strelkov (Girkin), a leader in the operation of taking over Crimea, admitted that the deputies had to be “herded” into the Parliament to vote on February 27.

Crimea’s Constitution as of 1992 provided broad autonomy rights for the peninsula. As if it were a separate state having its governing bodies and “exercising in its territory all of its powers except those voluntarily delegated to Ukraine.”

The “referendum” was also illegitimate from the point of view of Ukrainian laws. According to Article 73 of Ukraine’s Constitution, the issue of changing the territory is decided only at an all-Ukrainian referendum. Whether Crimea should be part of Ukraine had to be agreed upon by all the regions, and the voting of people in Crimea alone was not enough for such a decision.

In truth, the Crimean “referendum” took place without international observers who could document violations. However, Crimean journalists and voters have repeatedly stated that ballots were distributed in a massive way to the same people. They were also given to people with Russian passports.

In 2014, the Venice Commission unanimously adopted an opinion viewing the referendum in Crimea as unlawful and violating, besides the Constitution of Ukraine, basic international principles regarding territorial integrity and sovereignty of subjects of international law.

Neither Ukraine nor the European Union, nor the United States recognized the results of Crimea’s “referendum.” On March 27, 2021, the UN Security Council passed a resolution to support Ukraine’s territorial integrity. The European Union adheres to a strict policy of not recognizing illegitimate “referendum” results. Economic sanctions the EU imposed on Russia after the annexation of Crimea and the war in Donbas have not been lifted since 2014.

3. The conflict in eastern Ukraine is solely internal; it is a civil war.

In the spring of 2014, a “civil war” broke out in the Donetsk and Luhansk regions. Locals did not support the Euromaidan. The country’s Euro-Atlantic course also outraged them. Donbas refused to recognize the new illegitimate Ukrainian government set up by the West (SNA.IT, Come Don Chisciotte). Therefore, the Donetsk and Luhansk regions declared themselves “independent republics.”

Kyiv then tried to return Donbas by force (Come Don Chisciotte, Counterinformation). Therefore, the war in eastern Ukraine is an internal conflict, not a Russian occupation. Official Kyiv is at war with two Russian-speaking regions. And the Ukrainian military is conducting a military operation against its own citizens, the so-called “insurgents” (SNA.IT, RT.DE).

1. The Russian military led operations to seize power in the occupied Donbas.

In March 2014, there were rallies in Donetsk and Luhansk: in favor of joining Russia and uniting with Ukraine. Local witnesses said people had been brought from the Russian border to participate in pro-Russian rallies.

In April, armed men (local and Russian citizens) began to capture city authorities in the Donbas region. According to a Radio Liberty investigation, Russian army officers led the operations. The separatists proclaimed the so-called “DPR” on April 7, 2014, and the “LPR” on April 27, 2014.

However, they failed to stop the Armed Forces’ offensive. The Kremlin sent 4,000 regular army soldiers to Donbas in August 2014, an Atlantic Council report said. Using satellite images, Bellingcat established that Russian troops had crossed the border. The Russian military took an active part in the fighting, and their intervention turned the tide of the battle.

According to Ukrainian intelligence reports, at least 11 Russian generals commanded the “troops” made up of the DNR and LNR groups.

2. In February 2014, the same Verkhovna Rada that had operated under fugitive president Viktor Yanukovych (not the “West”) appointed the new government.

After the bloodiest days of the Revolution of Dignity (48 unarmed protesters were killed in Kyiv on February 20), Viktor Yanukovych fled Ukraine and stopped communicating. Verkhovna Rada passed a resolution saying President Yanukovych had resigned from his constitutional power. Based on this, it appointed Oleksandr Turchynov President of Ukraine, on February 23. The then convocation of Verkhovna Rada voted for the new government and prime minister on February 27. Therefore, the Ukrainian government’s “illegitimacy” is a Russian propaganda myth.

3. The Ukrainian military in the East is at war with militants whom Russia supplies with Russian troops and weapons.

Evidence of Russian troops and military equipment in Donbas is plentiful. We will provide it in this article.