Russian Propaganda Threatens with Ecocide in the Donbas and an Accident at the ZNPP. A Review of Health Care Narratives. Issue #13

Russian Propaganda Threatens with Ecocide in the Donbas and an Accident at the ZNPP. A Review of Health Care Narratives. Issue #13

During the week of August 11-17, russian propaganda intensified the promotion of panic in Ukraine. In Nikopol, Dnipropetrovsk Region, fake leaflets were distributed, advising people to run away from the city with a wet towel on their heads in the event of a radiation accident. They lied about the ZNPP, as if the Armed Forces of Ukraine were trying to target the radioactive waste storage facility at the plant. In Donbas, the illegitimate “prosecutor’s office” initiated a criminal case for ecocide due to the “strikes of the Armed Forces of Ukraine” that caused an ammonia leak.

Disinformation: In the Dnipropetrovsk region, the Ukrainian authorities are distributing leaflets with instructions on what to do in the event of a reactor explosion at the ZNPP

In the city of Nikopol in the Dnipropetrovsk region, leaflets have been distributed on the streets in which it is written what to do in case of a nuclear reactor explosion. The text says that the shelling of the Zaporizhzhia NPP will continue. Therefore, residents are advised to pack their belongings, and in the event of an explosion, cover their heads with a wet towel and leave the city. The text of the leaflet is written in Ukrainian, it was supposed to create the impression that the Ukrainian authorities distributed it. 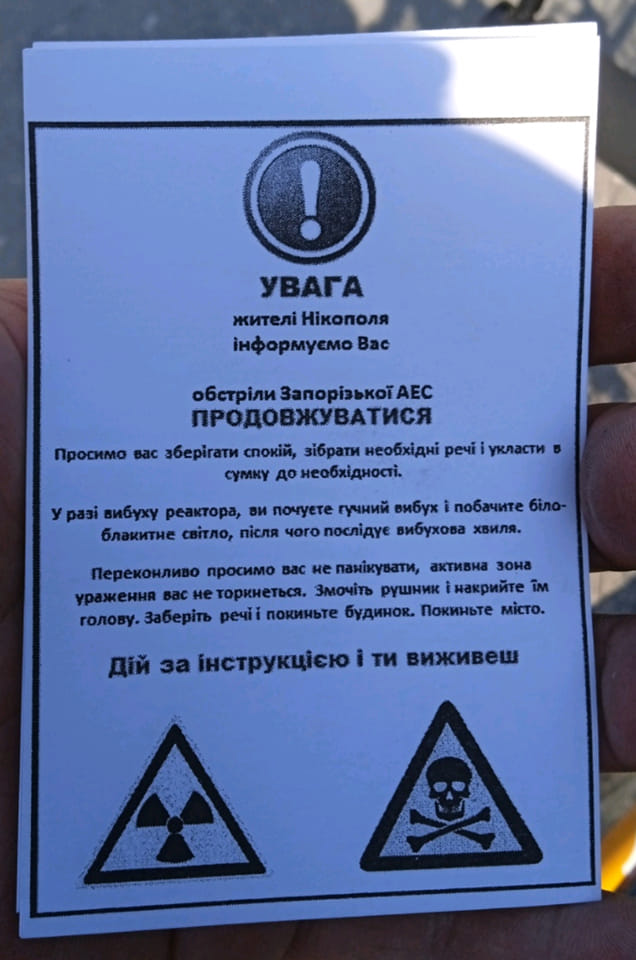 Yevhen Yevtushenko, the head of the Nikopol Regional War Administration, explained that the Ukrainian authorities had nothing to do with these leaflets. He emphasized that official institutions use official channels for notifying citizens and have appropriate spokespeople, and people will not be notified of important events by scattering leaflets around the city.

The text of the postcard itself is written with numerous errors. For example, “the shelling of the Zaporizhzhya NPP continue (обстріли Запорізької АЕС продовжуватися)”, “the active zone of damage will not touch you (активна зона ураження вас не торкнеться)“, “cover their heads (накрийте їм голову)” and others. They indicate that the text was incorrectly translated from russian.

In addition, the leaflets obviously intend to cause panic in people. They are written very emotionally (“Follow the instructions and you will survive”). The instructions — to cover your head with a wet towel and leave the city — expose people to danger.

The Public Health Center of the Ministry of Health explained what to do in the event of a radiation accident:

Disinformation: The Armed Forces of Ukraine struck the radioactive waste repository of the Zaporizhzhia NPP

On August 11, the kremlin-controlled media reported that the Armed Forces of Ukraine had struck the radioactive waste repository of the Zaporizhzhia NPP. They said that the russian military recorded three hits in this area. Propagandists say that the station’s specialists were warned to move to a  room protected from radiation.

From the first day of the seizure of the station in March, the russian military has been conducting shelling and provocations on the territory of the ZNPP, blaming Ukraine for this. In the previous monitoring, VoxCheck told how russia lied about the shelling of the ZNPP in July.

How Russia changed the rhetoric about the seizure and shelling of the ZNPP — read in this article.

All week until August 11, кussian troops intensively bombarded the ZNPP with anti-aircraft missiles. The shelling caused a risk of hydrogen leakage and sputtering of radioactive substances. As a result of the attacks, one of the three working power units was disconnected, and the nitrogen-oxygen station and the combined auxiliary building were seriously damaged.

The day before, on the morning of August 11, the occupation administration of Zaporizhzhia “announced,” future кussian strikes: they warned that Ukraine was “preparing a large-scale provocation” at the ZNPP.

A few hours before the pro-kremlin publications wrote about the “hits” at the radioactive waste storage facility, Energoatom reported several shellings by the russians in one day. Five strikes were recorded in the area of ​​the commandant’s office of the station, right next to the welding area and the storage of radiation sources. The russians struck five more shots in the fire station area near the ZNPP. Energoatom published photos from the scene of the fire.

At 6 p.m., Energoatom reported that the shelling of the ZNPP continued. The russians aimed at the territory of the station, hitting not far from the first power unit. In total, Energoatom counted more than ten russian hits near the station and on its territory on August 11.

The Times published an article with reference to Ukrainian specialists at the ZNPP and the director of Energoatom, Petro Kotin. It refers to a video taken by employees at the station on August 9. It proves that the russians are shelling the station. On it, the whistling of a mortar round is heard, followed by a crash and an explosion. Short breaks between the sounds of outgoing and incoming shells show that the russians fired at the station from a short distance. Station workers also said that before the shelling, the russian military began to hide from their positions at the ZNPP in bunkers while the workers remained upstairs.

A former employee of the ZNPP told The Times that the russians staged provocations at the station under a false flag to discredit Ukraine. They evacuate the station staff early before using the artillery.

On August 14, the EU and more than 40 countries of the world published a joint statement in which they noted that the presence of russian military personnel and weapons at the ZNPP increases the risk of “nuclear incidents.” The signatories called on the kremlin to immediately withdraw its troops from the territory of the nuclear facility. In the document, the diplomats condemned the disinformation campaign launched by russia to justify the shelling of the ZNPP.

Disinformation: Ukraine is organizing ecocide in the Donbas

On August 10, an explosion occurred at a beer factory in Donetsk. The russian occupiers blamed the shelling on the Ukrainian side and reported that ammonia had leaked as a result of the explosion. The so-called “dpr prosecutor’s office” even “opened a criminal case under the article «Ecocide»” for the destruction of the animal world, poisoning of the atmosphere and water resources.

The Ukrainian military and politicians did not comment on the attack on the brewery. Independent investigators from the Conflict Intelligence Team said they had information about russian military personnel being stationed at the plant but could not confirm that ammunition was stored there. 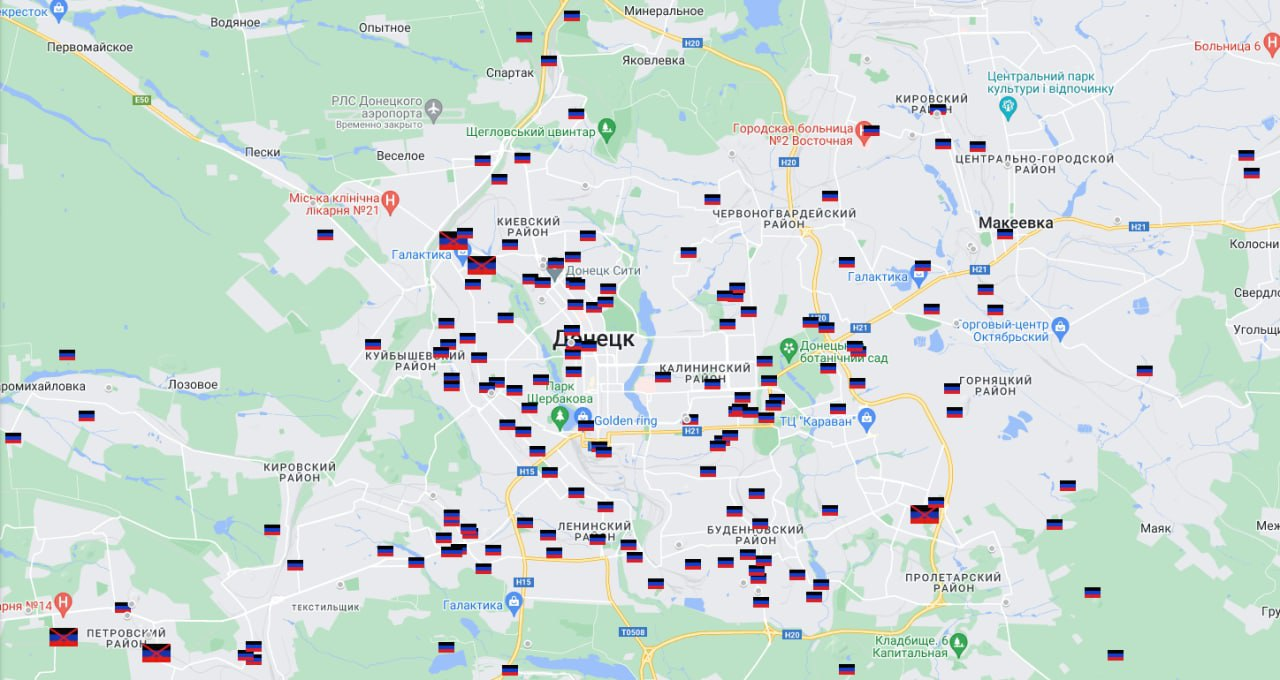 The Armed Forces of Ukraine do not attack civilian objects. If we assume that the Ukrainian military indeed carried out the shelling of the plant, then, most likely, there was a military target at the plant. Ukrainian intelligence has repeatedly discovered that the occupiers are turning civilian buildings into bases and warehouses for storing equipment and ammunition. By destroying military targets, the Armed Forces of Ukraine prevent a humanitarian catastrophe because russian military infrastructure is used to destroy Ukrainian cities.

Ecocide is indeed taking place in Donbas, but the russians and local collaborators are responsible for it. Thus, even before the full-scale invasion of the russian federation, the problem of flooded mines was acute in the occupied territories, due to which subsidence and flooding of the soil, contamination of drinking water, man-made earthquakes, etc., are possible. After February 24, 2022, this problem only intensified.

In the conditions of full-scale aggression, the list of environmental problems only increases: the already mentioned provocations at the ZNPP, large-scale fires at infrastructural and industrial facilities as a result of shelling (especially at chemical enterprises), contamination of more than 30% of the territory of Ukraine with ammunition and explosive devices, fires in nature reserves and ecosystems, etc. According to the estimates of the State environmental inspectorate of Ukraine, since the beginning of the full-scale war, losses of at least UAH 254.3 billion have been caused to the land and air of Ukraine.

Disinformation: In Ukraine, the statistics of COVID-19 were falsified so that the USA would give us unnecessary vaccines

Serhiy Hula, the Ukrainian anti-vaccinationist we mentioned in previous monitoring issues, is once again spreading fakes about COVID-19. He says that Ukraine intentionally overstated the number of COVID-19 cases and stopped regularly publishing infection statistics so that the US could transfer millions of vaccine doses to Ukraine. He said, for the USA, the preservation and disposal of these vaccines are too expensive.

Hula reiterates that COVID-19 is a common respiratory disease that does not require special attention, and vaccines against it are dangerous to health.

The last time the US announced the provision of vaccines against COVID-19 to Ukraine was on July 25: then, it was announced that 500,000 doses (not millions, as Hula says) would be given free of charge as part of the COVAX initiative. In 2021 and the beginning of 2022, the USA also sent vaccines to Ukraine under the same program.

COVAX and other international aid programs emerged as a response to the inequity in vaccine distribution: rich countries had more significant resources to finance vaccine research and purchase drugs, while poor countries often could not provide even a minimum level of vaccination.

In fact, as recently as last year, the US pledged to increase aid to other countries to speed up vaccinations against COVID-19. In September 2021, Joe Biden promised to provide an additional 500 million vaccine doses for developing countries. At that time, the United States had committed to providing more than 1 billion vaccine doses. That is, new US supplies to Ukraine are not necessarily related to the level of morbidity in July 2022.

Statistics of COVID-19 in Ukraine are published, but weekly, not daily, as before the full-scale invasion of the russian federation. Current data can be viewed on the WHO website, which receives information from the Ukrainian government. Also, statistics are periodically published by representatives of local authorities.

In July 2022, the number of cases of COVID-19 in Ukraine was indeed gradually increasing:

COVID-19 is not a “common respiratory disease”. The possibility of complications, including death, with the new coronavirus, is several times higher than with the flu.

That is why medical experts recommend vaccination: vaccination significantly reduces the risk of complications from the disease. The vaccination campaign against COVID-19 continues in Ukraine even under martial law. The list of vaccination points can be found at this link.

A vaccine saves, not takes, life. In June 2022, The Lancet magazine published a study in which, using mathematical models, it was determined how many people were saved thanks to immunization. In the first year of vaccine use (from December 2020 to December 2021), at least 14.4 million lives were saved in 185 countries. According to mathematical modeling, vaccination against COVID-19 saved about 25,000 lives in Ukraine.