Schrödinger’s GDP: What is Wrong with the Calculation of GDP in Ukraine? | VoxUkraine

Schrödinger’s GDP: What is Wrong with the Calculation of GDP in Ukraine?

In simple terms, GDP is equivalent to value added. Statisticians approach its calculation in two ways. The resulting discrepancy between two numbers is equal to UAH 600 billion. Perhaps, it is now time to find out how large Ukraine’s economy really is.

In the middle of February, Ukraine’s Prime Minister Volodymyr Groysman announced that Ukraine’s GDP rose by 4.7% in the last quarter of 2016 compared to the 4th quarter of 2015. “This means that Ukraine’s economy has started to get up off its knees”, claimed the head of the government. IMF and the Ministry of Economic Development and Trade have estimated that Ukraine’s economy grew by about 2.2% in 2016, with GDP rising above UAH 2.3 trillion.  The State Statistic Service of Ukraine will probably release a similar number on March 21, when the preliminary official GDP estimates for 2016 are to be made public.

But what if this number is not correct? What if the size of Ukraine’s economy is actually considerably different? We do not claim that this is necessarily so, yet there are some oddities and discrepancies in Ukraine’s statistical data that can hardly be explained. This article invites economic experts to discuss and research the issue and find out the real size of Ukraine’s economy.

What is wrong with Ukraine’s GDP?

For instance, key budget indicators (presented as ratios to GDP) are indispensable for the IMF extended fund facility program and to the budget resolution. The ratio of the public debt to GDP says much about the country’s financial position. In Ukraine, GDP (measured in US dollars) will have an impact on the cost of servicing the debt, as the debt restructuring in 2015 involved the issue of GDP warrants. GDP per capita helps determine the level of a country’s economic development. For instance, based on this indicator (using the purchasing power parity), Ukraine is currently ranked 113th (between Morocco and Guatemala) and is one of the poorest countries in the region.

What does GDP stand for and how is it calculated?

GDP is the value added that is created in an economy, including net taxes on products paid by consumers. To get it, we take all the goods and services produced in the country within a particular period, measure their total value, and then subtract the value of all goods and services that were used to produce them.

In practice, the calculation of GDP is a complex process. Based on the data from statistical surveys and administrative sources, Ukrainian Statistical Agency (Ukrstat) compiles national accounts according to the international standards SNA-2008. In order to take into account the shadow (non-observed) economy, the data are re-evaluated by using the information from sociological surveys, estimates by experts, law enforcement agencies data (see the methodology here and here). Based on the national accounts, GDP is calculated according to three methods: the output one, the income one, and the expenditure one (more details here and here, as well as in the Note below). All the methods have to yield the same number.

Three methods are used to calculate the GDP: the output (production) method, the income method, and the expenditure method.

The structural business survey (SBS) is one of the data sources for the national accounts. Value added – a key statistical indicator – is calculated both in SBS and in national accounts. And it is here that a huge discrepancy arises.

Yet, the data from structural business statistics (SBS) survey show that value added amounted to UAH 2.3 trillion. It was actually 0.3 trillion bigger than GDP itself in 2015 (UAH 2 trillion).

It is thus obvious that part of the value added, produced by companies, is not included in the GDP (Figure 1). 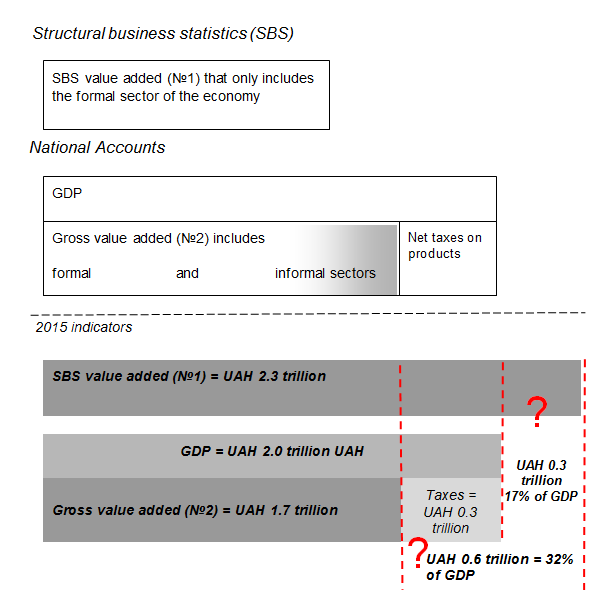 The calculation of the SBS value added (№1) requires several stages. First, the indicator is measured for each company based on its reports. Next, the indicators are summed up in order to get an integral value added indicator for the economy as a whole, a particular industry or a region.

The methodology for calculating SBS value added (№1) is based on the Regulation (EU) № 295/2008 of the European Parliament and Council (11.03.2008). The methodology is prepared meets the recommendations of the experts of the Central Statistics Bureaus of Latvia within the framework of the project Twinning Light Ukraine “Harmonizing Ukraine’s official statistics with the EU standards”. The Ukrstat has started to publish the SBS value added (№1) only recently, while the data are available for the period starting from 2013.

Gross value added (№2) is also calculated in several stages. First, it is measured as the difference between the output and the intermediary consumption for each type of economic activity and sector. Next, the results are summed up for the economy as a whole.

Gross value added (№2) is calculated according to the methods (here and here), developed on the basis of the system of national accounts (SNA-93), European system of national and regional accounts (ESA-95), and the updated standards SNA-2008 and ESA-2010. The Ukrstat web site has provided gross value added (№2) data since 2001.

The gross value added (№2) indicator should measure the economic activity covered by regular statistical surveys, as well as the non-observed economy. To cut it short, the indicator should capture both the formal and shadow economy.

It is thus no surprise that these two indicators cannot be equal in a country with large informal economy. Considering this factor, the gross value added (№2) should be larger as it accounts for the informal economy. However, according to the Ukrstat, this indicator is significantly smaller (by UAH 640 billion in 2015) than the value added by companies (№1) (Figure 2). 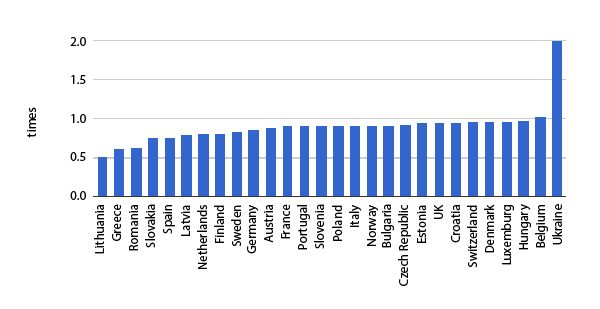 It is too early to make any conclusions as to the credibility of the Ukrstat calculations. However, it needs to be explained

At this point, we can only claim that the GDP probably does not include part of the value added that is created in the economy. If it is really so, it may turn out that Ukraine’s GDP is underestimated. The underestimation of the country’s GDP influences the efficiency of its economic policy.

This issue is one of the challenges that the new leadership of the Ukrstat faces on the eve of releasing the annual GDP estimates.

VoxUkraine is ready to take part in the research and help find answers to the questions we raise in this article.