Tomas Fiala, one of the most influential names in the Ukrainian financial world in his rare interview sheds some light on why the country is stuck with the worst corruption rate in Europe. Fiala is also the head of the biggest Ukrainian business association and CEO of Dragon Capital. Oleh Havrysh from the Ukrainian news-magazine Novoe Vremya spoke to him earlier in Kyiv.

– How would you assess the level of corruption in Ukraine in the wake of Euromaidan?

– When I listened to Arseniy Yatsenyuk (Ukraine’s Prime-Minister – ed.) and Petro Poroshenko (Ukraine’s President – ed.) speaking from the Maidan stage, my expectation was that they would immediately enforce zero tolerance for corruption once they took power. I was far from thinking that they would repeat the mistakes made by Viktor Yuschenko (the Ukrainian president (2005-2010) – ed.) and Yulia Tymoshenko (former Prime Minister of Ukraine – ed.) after the Orange Revolution. Well, and I didn’t think Ukrainian society would let them make these mistakes.

The current situation is reminisent of 2005. Yes, there is no mafia-style corruption created by the Yanukovych regime, but corruption overall remains rampant, engulfing the political parties and national leadership. For me and the local business community, and Ukrainian society as a whole, it’s a bitter disappointment.

– Who is the champion of corruption in Ukraine?

– When Yanukovych was in office, a common metaphor used to illustrate his rule was “the fish rots from the head” (by the way, today’s powers that be were fond of using it, too, at the time). I think if the current leaders fail to make headway for another three months, they will start hearing the same thing being said about them.

– Who in the political realm is underperforming the most and why?

– The heads of the law enforcement agencies, where lining one’s own pockets remains the overriding goal. I heard some ministers succeeded in generating $300m for themselves and their parties between March and November last year. The same can be said about police, prosecutors, the security service, and courts. 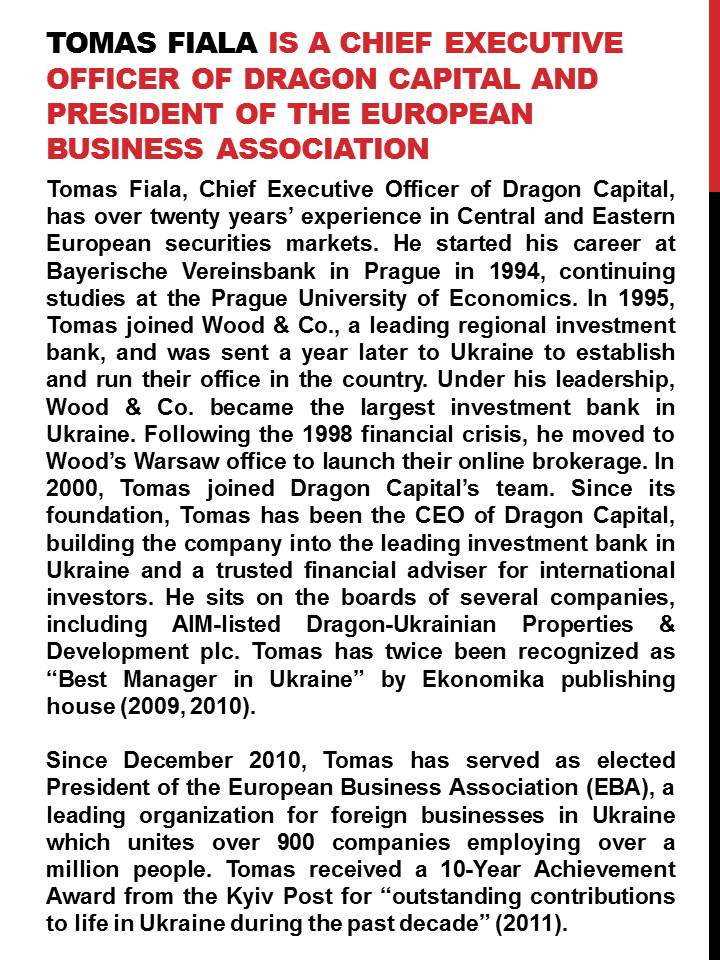 – Which spheres have seen the most egregious corruption over the past year?

– Imports, for example. A large group of importers joined forces last year in a bid to stop grey imports. Unfortunately, the customs service continued making money off smuggling. The importers repeatedly approached top customs and tax officials about stopping contraband flows only to hear promises that were not followed by any action. The importers have now asked me to communicate with the new finance minister, in a final bid to create a level playing field for all importers. If their effort fails, most of them will have no other option but to return to the smuggling schemes not to lose their business. Here is a simple recipe how to improve the country’s balance of payments instead of levying an extra 5-10% on importers already paying all their dues. By increasing taxes on legal imports, you only make contraband more lucrative.

– Why hasn’t anyone been punished for corruption? Why are the law enforcement bodies dragging their feet?

– The law enforcement officers are only happy to be tipped off about someone’s corrupt doings and go and shake him down for cash.

– Government ministries and agencies and state-owned companies — this is where corruption flourishes. Take public procurement, licensing, or appointments to lucrative positions. How to deal with all this?

– Lay off 80% of employees (90% at the Economy Ministry) and just cancel most of their job functions, as the impact of some of those on economic growth is actually negative, not even neutral. Hire new people in a transparent and competitive manner, hike their salaries to market levels, and severely punish any wrongdoing. In Georgia, which has a population of 4 million, it took incarcerating 100,000 people to uproot the practice of giving and taking bribes. The number relative to Ukraine’s population would be over 1 million.

– How come department directors at certain ministries are dollar millionaires?

– The answer is bribery, explicit or implicit. Yes, department heads at certain ministries make $20m annually for themselves and their political patrons who they owe their positions to.

– How can this kind of illicit profiteering be stopped?

– As I have already said, cut and overhaul staff, raise salaries, and do not let any abuse go unpunished. This simple recipe has proved effective in other countries, and there are many advisers ready to help. There is no need for the Ukrainian leadership to reinvent the wheel. The only thing needed is the will to earn money honestly, but it is hard to come by in Ukrainian politics, unfortunately.

– For corruption to be eradicated, should everyone currently working at government ministries and agencies be let go? Or partial layoffs will do?

– Judging from what Kakha Bendukidze (an author of liberal post-Soviet reforms in Georgia – ed.) said (and I believe him), in Georgia they initially dismissed 80% or so of government employees but eventually had to fire the remaining 20%, too.

– Corruption cannot be overcome unless there is a change of elites. Do you agree?

– Yes. The way political parties are commonly financed in Ukraine poses a major obstacle to tackling corruption. The parliamentary elections last October cost each of our leading parties up to $100m. It’s the money of their oligarch sponsors, whose goal now is to recoup and earn a hefty profit on their investment.

– Are President Poroshenko and Prime Minister Yatsenyuk capable of changing the status quo?

– As I said, let’s wait for three more months before deciding on the applicability of the expression “the fish starts to stink at the head”. I hope the President and Prime Minister can stand up to this formidable challenge. I wish them all the success and stand ready to continue providing all the help I can. For example, I invested in launching a newsmagazine last year not because there was a booming advertising market in Ukraine to profit from. Independent media, immune to the influence of oligarchs and politicians, is a prerequisite for building a free and democratic country with a vibrant market economy. But solving the existing problems requires a systemic approach, including the aforementioned reforms of public administration and political fundraising.