The Geneva Conventions: How Russia breaches them and blames Ukraine for it. VoxCheck explains

The Geneva Conventions: How Russia breaches them and blames Ukraine for it. VoxCheck explains

Russia is a party to the Geneva Conventions for the protection of war victims. However, its armed forces and the terrorist groups it supports continue to systematically and defiantly violate international humanitarian law in Ukraine.

Authors: Oleksandra Panasytska, Elvina Koroy (a lawyer at the Center for Democracy and Rule of Law)

What are the Geneva Conventions?

The USSR ratified the Geneva Conventions in 1954. Today, 190 countries, i.e., almost all world countries, adhere to the Conventions.

Today, we are witnessing numerous bombardments of civilian infrastructure and the population by Russian occupiers, explains Elvina Koroy, a lawyer at CEDEM. Such actions are a war crime according to:

The above articles concern the prohibition of bombardments of civilian infrastructure and the population. Yet Russia is insidiously committing other war crimes. Attacking and seizing nuclear infrastructure – the Chernobyl Nuclear Power Plant (ChNPP) on February 24, 2022, and the Zaporizhzhia Nuclear Power Plant (ZNPP) on March 4, 2022 – was in direct violation of Article 56 of Protocol (I) to the 1949 Geneva Conventions, i.e., protection of works and installations containing dangerous forces.

In addition, the Kremlin has been shelling civilians using weapons banned by the Geneva Conventions. 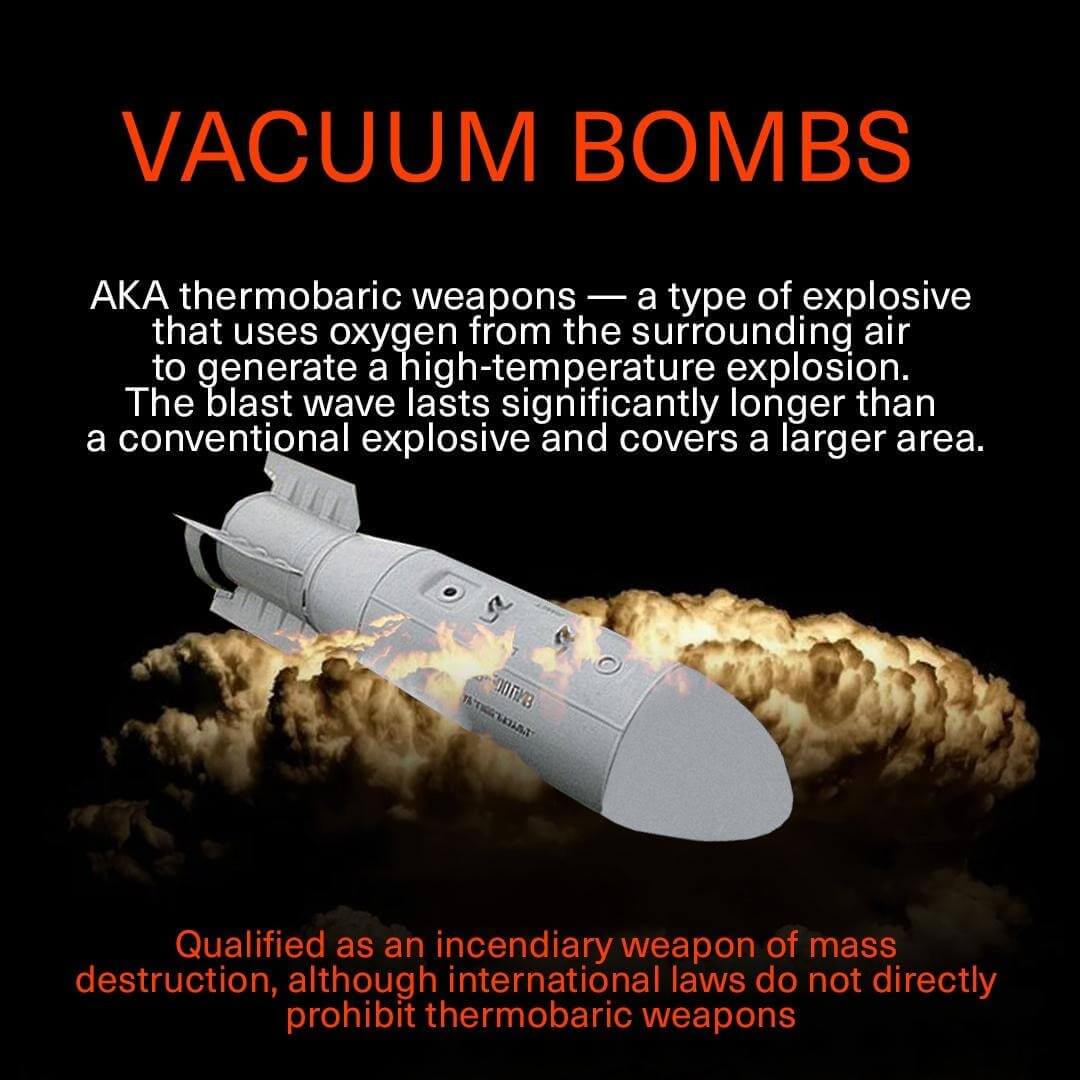 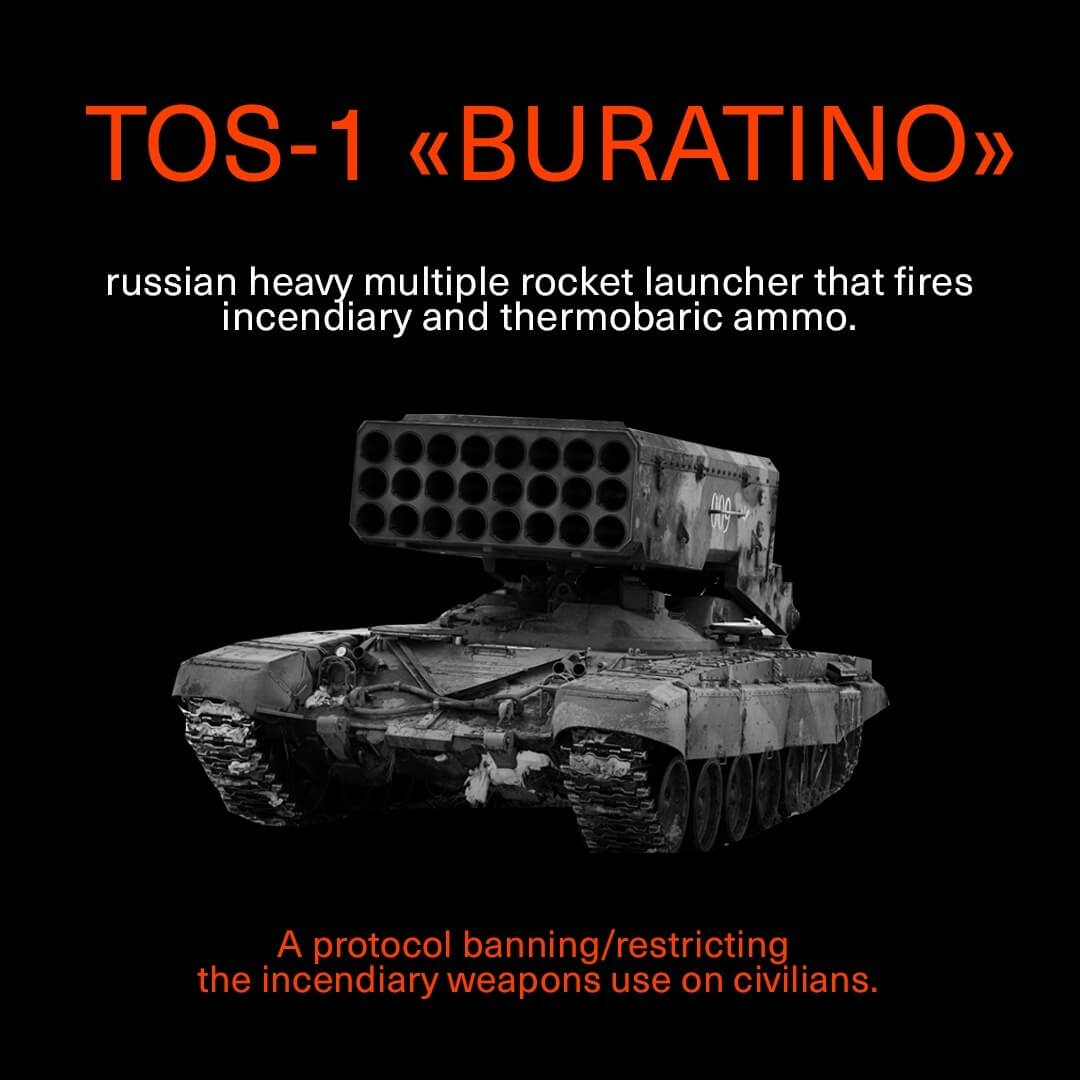 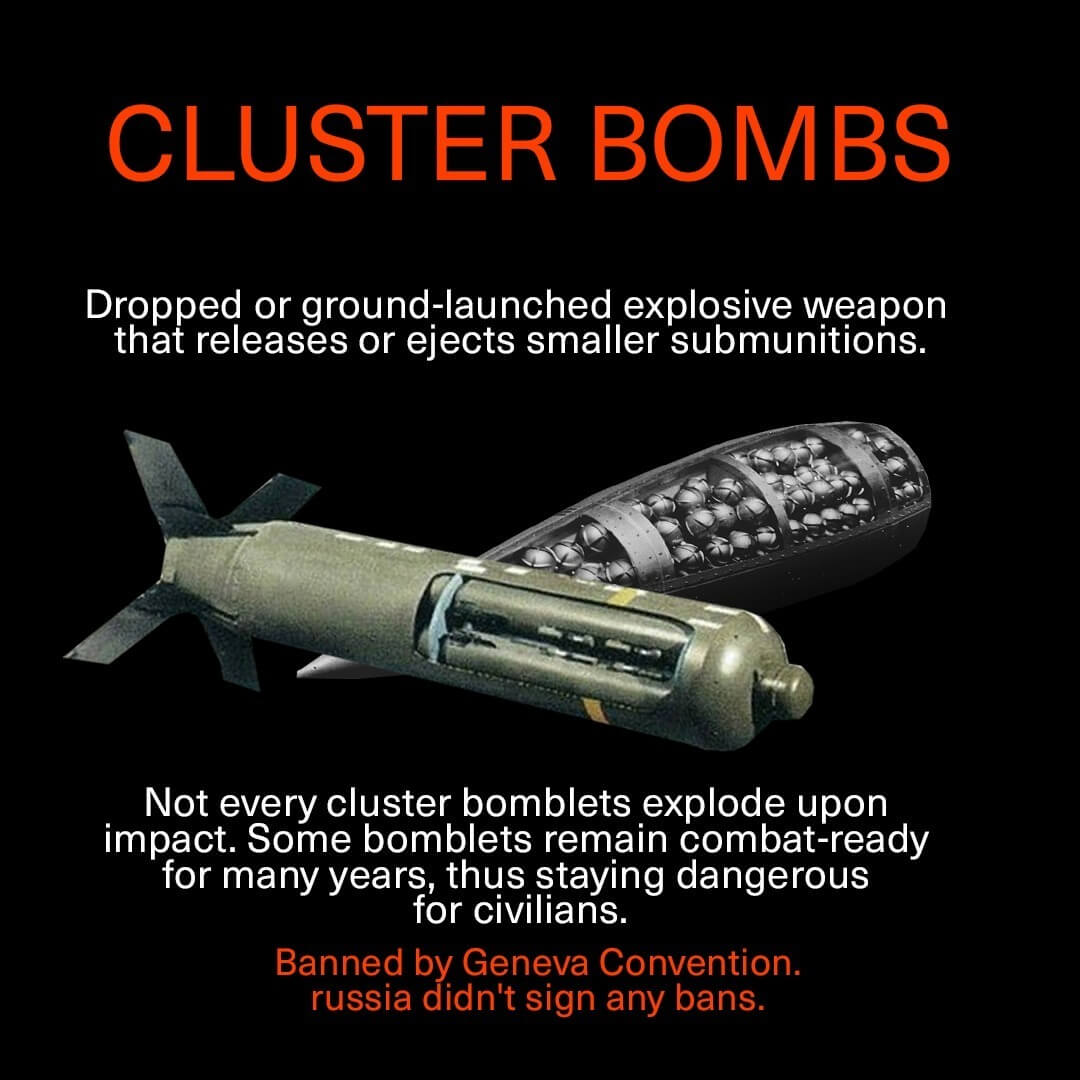 Weapons banned by international treaties that Russia is using against Ukraine

On March 2, 2022, the occupiers bombarded the Dormition Cathedral in Kharkiv, where there were civilians at the time. After this strike, the Cathedral – the oldest Orthodox church in Kharkiv – was severely damaged. This war crime falls under Article 27 of the Convention relative to the Protection of Civilian Persons in Time of War and Article 53 of Protocol (I) additional to the Geneva Conventions relating to the Protection of Victims of International Armed Conflicts, explains Elvina Koroy.

Recently, we witnessed an attempt by the Russian occupiers to attack twice the Okhmatdyt Hospital in Kyiv with missiles. Overall, there have been 34 attacks on medical institutions in Ukraine since February 24, and their number is growing every day. CEDEM’s Elvina Koroy explains that such actions breach Article 18 of the Convention relative to the Protection of Civilian Persons in Time of War (civilian hospitals organized to give care to the wounded and sick, the infirm and maternity cases, may in no circumstances be the object of attack, but shall at all times be respected and protected by the Parties to the conflict). Medical personnel engaged in conveying, searching for, and treating wounded and sick civilians, as well as the sanitary equipment used for transporting sick or wounded enjoy the same rights (Articles 20-22 of the Convention).

Instances have been known of Russia deploying military equipment in residential areas to ensure the equipment’s inviolability. This also contradicts the provisions of Article 51 of Protocol (I): the presence or movements of the civilian population or individual civilians shall not be used to render certain points or areas immune from military operations, in particular in attempts to shield military objectives from attacks or to shield, favor or impede military operations.

These horrific crimes are made possible mainly thanks to Russia’s propaganda machine that uses television as a tool to spread disinformation, incite hatred, propagate violence, and conceal the truth about the war in Ukraine.

In addition, the Occupying Power is forbidden to force protected persons to serve in its armed or auxiliary forces. Even before the start of the large-scale invasion, its authorities decreed a general mobilization of the local population due to the Ukrainian Army’s alleged plans to carry out an offensive in Donbas.

How Russia manipulates the topic of the Geneva Conventions, accusing Ukraine of wrongdoing

Videos of Russian prisoners have repeatedly circulated in the media and on the Internet. For instance, Insider posted a video where Ukrainians fed a captured Russian soldier. The prisoner was also allowed to talk to his mother on the phone. The Russians took this topic further, arguing that Ukrainians humiliate prisoners in this way in violation of the Geneva Conventions.

It is not a matter of humiliation. An ordinary civilian woman from Ukraine held the phone while the prisoner was eating. The woman tried to calm the prisoner’s mother during the call, saying: “Everything’s alright.” At the end of the conversation, the Ukrainian woman told his mother she would be contacted, and her son was safe and sound.

Such actions by Russia constitute a violation of international law and the customs of war. However, not surprisingly, this is not the first time the aggressor country has committed war crimes. During the two Chechen wars and assisting Assad in Syria, Russia resorted to such insidious acts as the extermination of civilians in direct violation of the Geneva Convention relative to the Protection of Civilian Persons in Time of War and the Protocol (I) thereto.

Frankly, in every armed conflict to which Russia was a party, there were violations of the protection of civilians and objects during conflict. Neglecting the security of citizens residing in areas of armed conflict is Russia’s “visiting card.” Non-compliance with the Conventions’ provisions is a direct violation of the commitments undertaken in the documents signed by Russia. After all, Russia is not fulfilling any of its obligations whatsoever. Even Otto von Bismarck once said that “agreements with Russia are not worth the paper on which they were written.”