The Great Migration: No One in Ukraine Knows How Many of Our Compatriots Have Moved Abroad | VoxUkraine

The Great Migration: No One in Ukraine Knows How Many of Our Compatriots Have Moved Abroad

According to State Statistics Service data, over the past 12 years Ukraine has been experiencing migration population growth – over the said period 230,000 more people entered the country as compared to those who left. At the same time, according to UN statistics, Ukraine is among the top ten countries with the highest emigration levels and the numbers have increased in recent years. State Statistics Service estimates the number of migrant workers at 1.3 million, while experts say the number varies between 2 and 4 million. The discrepancies emerge both because of different understanding of what “migrant” means and different data collection methods.

A poor understanding of the “mathematical component” leads to confusion and speculation. Thus, for instance, many politicians claim that in recent years between 5 and 8 million Ukrainians left the country trying to get away from poverty and unemployment.

VoxUkraine tried to find out what was wrong with migration data and what could be done about that.

The UN provides the broadest definition of who a migrant is – it includes both people who move permanently and those who move for study or work as well as refugees and people seeking asylum.

According to UNESCO definition a migrant is “a person who lives temporarily or permanently in a country where he or she was not born, and has acquired some significant social ties to this country”. It is essential that a migrant decides to move voluntarily. This means that refugees and persons forced to leave a country are not migrants under this definition.

A migrant worker in the terminology of ILO is “a person who migrates from one country to another with a view to being employed otherwise than on his or her own account”. When calculating the total number of migrant workers we should differentiate between the number of people working abroad at a certain time period and those who had the experience of labour migration at any given period in the past 2-3 years (as the State Statistics Service survey establishes) or during the whole life.

Consequently, when estimating the number of migrants we should first pay attention to the definition of “migrant”.

Figure 1. Number of migrants according to UN data, mln persons 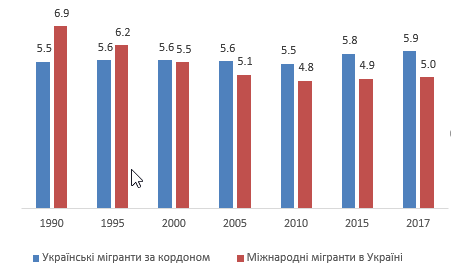 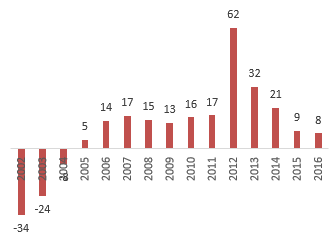 More than a half of Ukrainian migrants, over 3 million, live in Russia. During the first decade of independence, their number was growing (Figure 4). Then Russia became less attractive for Ukrainians – their number decreased by almost 15%. Russian military aggression against Ukraine has spurred a new wave of emigration – the number of people living there increased from 3 to 3.3 million people. 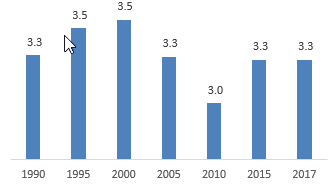 The estimates of migrant workers in Ukraine also vary. For instance, IMO estimates their number at 688k people. State Statistics Service is conducting periodic surveys in order to determine the number of migrant workers using IOM methods. Based on its latest survey for 2015-2017, State Statistics Service has established that the number of migrant workers makes up 1.3 million people (approximately 8% of workforce). Experts doubt these figures.  To be more specific, according to estimates of O. Poznyak, Director of Migration Studies Sector at the Institute of Demography of the National Academy of Sciences of Ukraine  the number of Ukrainian migrant workers makes up 2.3 million people, Professor of Kyiv School of Economics H. Vakhitova cites 2.5 million, and the figure given by Centre of Economic strategy is 2.6 million.

What is the reason for such significant discrepancies?

UN recommendations of 1998 define international migrants as persons changing the country of their usual residence for any reason (see insert). UN differentiates between long-term (over 12 months) and short-term migrants (from 3 to 12 months).

There is no definition of international migrants in the Ukrainian methodology and migration movement is defined as a demographic process which changes the number and composition of population because of its territorial resettlement.

At first glance, both definitions are trying to encompass similar phenomena with the difference being that the UN definition reflects the total number of migrants and the migration movement reflects the change of their number over a certain period.

Registration cancellation is completed by a small number of migrants only – mostly those who obtain citizenship of a different country and simultaneously decide to terminate Ukrainian citizenship. Ukrainians, who are permanently or temporarily staying in a different country and do not have their registration at Migration Service canceled, are not accounted for in migration indices.

UN data encompasses all international migrants and uses mirror statistics. In particular, it contains Ukrainian statistics data and the statistics of countries in which Ukrainian emigrants live. This helps reflect migration flows more accurately, yet even this methodology has certain flaws and does not yield accurate estimates. These flaws are primarily connected to the fact that the definition and observation methodology for international migration may be different in different countries. Consequently, mirror estimation methods require some adjustments and assumptions.

Nonetheless, State Statistics Service does not use mirror statistics data so its data encompasses only a small portion of those who have moved abroad for permanent residence, studies or work over a long time.

Apart from statistics and surveys of other countries, several other sources of data may be used to determine the number of migrants.

UN data encompasses all international migrants and uses mirror statistics. In particular, it contains Ukrainian statistics data and the statistics of countries in which Ukrainian emigrants live. This helps reflect migration flows more accurately, yet even this methodology has certain flaws and does not yield accurate estimates.

Some countries have demographic registries, registries of foreigners, specialized registers of refugees and other groups of population. Statistical services can obtain data from these registries and use it to assess migration indices. The main drawback of this source of data is that it only reflects information on those staying in the country legally. Also, they do not always contain information on short-term migrants. Despite such flaws, in international practice administrative registries are considered one of the main sources of information for international migrant statistics purposes.

Back in 1998, UN recommendations have pointed to problems with population registries in post-soviet countries. State Statistics Service methodology did not foresee the use of population registries since such registries became systemic for government agencies only after 2015. When the decision was made about transferring place of residence registration mandate to territorial communities, local authorities started creating such registries in their towns or communities. There is also a centralized place of residence registry, which territorial communities can use not to create their own. Demographic registry was created in October 2017. This registry only has information about citizens who have biometric passports. Hence, it is incomplete.

There are other administrative registries in Ukraine, the data of which can be used as additional guide for migration assessment, namely tax service registry, but the official migration estimation methodology does not use this data.

Apart from registries, the UN recommends using other available data accumulated by government agencies. In particular, useful data may be obtained from residence and employment permits, asylum-seeking applications etc.

Ministry of Foreign Affairs of Ukraine has information about Ukrainian citizens abroad who are registered with consulates (461,000 persons in 2016). This data is also not included into migration movement assessment methodology.

Border crossing records used to be one of the main sources of migration information. Entry/exit points were places for collecting information about the country of destination, aim and duration of trip based on data contained in passports, visas, residence and employment permits. Some countries use special statistical forms that are filled out on the border.

Border crossing records used to be one of the main sources of migration information. Entry/exit points were places for collecting information about the country of destination, aim and duration of trip based on data contained in passports, visas, residence and employment permits. Some countries use special statistical forms that are filled out on the border.

Practice revealed a number of drawbacks in this method of data collection. This data is insufficient to make a distinction between tourists and international migrants. Information collected during border passing often turns out to be false and the procedures for collecting this information are resource-consuming because of the flows of people who cross the border. In order to decrease reporting load some countries collect selective statistics data, yet the problem of its accuracy remains to be solved.

Official statistics in Ukraine does not include border-crossing data to assess migration flows. Economic strategy centre has calculated that in 2002-2017 6.3 million more people existed the country than entered. Simultaneously, the same data shows that during the same period 9 million more foreigners entered the country than exited. Thus, in order to assess the number of migrants with this data, studies that are more detailed are required.

Such surveys have one significant drawback. They only cover families in which some members stayed in the country or have come back. If the whole family emigrated, there will be no data about it. At the same time, such surveys are rather informative for lower threshold migrant numbers.

Even though official estimates of labour migration have been there for more than 10 years, this data is also not included into the methodology for assessing total scope of migration, which the State Statistics Service is using.

What can be done right now to improve migration data quality?

Among the main hindrances on the way to quality demographic data, we usually consider delays in census data. We had our last census in 2001 and its data is becoming more and more outdated with each year. Since the last census, State Statistics Service has been reporting evaluative data on population, which was calculated on the basis of birth, mortality and (official) migration growth rates. This impacts not only the quality of demographic data but also such indices as GDP per capita.

In order to increase migration data quality and population data quality in general in Ukraine, it is worth considering the possibility of using mirror statistics, namely registries of countries where most Ukrainians leave. Effective methodology may be reviewed with regard for opportunities that the newly created demographic registry and territorial community registers can provide. Additional assessments may be offered by existing fiscal service registries. In addition, we should start borrowing advanced experience of using “big data” (cell operators, social networks) right away to assess trans-border movements.