The Power of Word II: What more than 6k headlines in Western and Russian media told about Ukraine | VoxUkraine

The Power of Word II: What more than 6k headlines in Western and Russian media told about Ukraine

In February 2017, the Doctrine of Information Security appeared in Ukraine. The President website says: “The purpose of the Doctrine is to clarify the principles of forming and implementing the state information policy, primarily in counteracting the destructive information influence of Russia within the hybrid war, started by it, and thorough reforming of the system of presenting information about Ukraine on the international arena”. To put it simple perhaps, the goal is to adequately resist Russia in the information war and represent Ukraine abroad in a favorable light.

Prior to the adoption of the Doctrine the state has already made some steps in the direction of information security: to fight Russian propaganda in Ukraine in 2014 the Ministry of Information Policy was established, the UATV television station was created, and Ukrinform now issues news in several languages. The “information war” was entered into not only by the state – at the expense of volunteers, crowdfunding and donors the StopFake and Ukrainian Crisis Media Center projects were created; the “1+1 media” group began broadcasting the English-language TV channel Ukraine Today, which was subsequently reformatted into the English version of the “UNIAN” website (also in the “1+1” group); Hromadske International project appeared on Hromadske TV , and so on.

Are these measures sufficient and how effective are they against the Russian propaganda machine? A partial answer to these questions can be found in the articles of the Western media about Ukraine. For this VoxUkraine analyzed what, when and more importantly – how, in what context and in what key they write about our country.

In the fall of 2016 VoxUkraine conducted research on 10,000 titles in the most influential and authoritative American and European media. Then we researched what they wrote about Ukraine, which Ukrainian events interested the western audience and how the media’s attitude towards our country had changed. Now, after 1.5 years, we made a new study using the same methodology. What has changed: is the West really tired of the Ukrainian theme, with what events and in what context Ukraine falls on the pages of leading editions, and who writes about Ukraine more – the West, Russia or Ukraine itself.

We are grateful to the project “Eye” for the provided data. For our article we took headlines in English where “Ukraine”, “Kiev/Kyiv” and “Donbas” appeared in the period from October 2016 to March 2018. For a more qualitative comparison we investigated the same media as in the previous article. 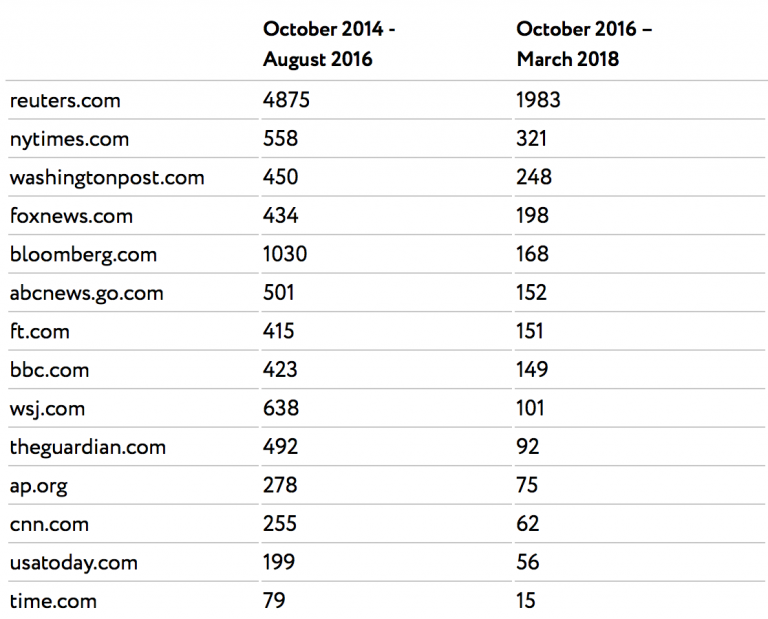 The 14 leading Western media together wrote 3771 publications on Ukraine over the past 17 months (221.8 news per month). This is 2.4 times less than in the sample of the previous study (534 news per month). Even major news agencies – Reuters and Bloomberg – wrote 2.4 and 6 times less, respectively (Bloomberg does not publish on the website all the news that is available to the agency subscribers).

In Western media Ukraine is most often mentioned in the Russian context. 28% of the headings we analyzed consisted of the words “Russia”, “Putin” or “Kremlin”. Even the most fruitful day for remembering Ukraine in the media passed in the context of Russia. March 23, 2017, all of the media from our sample wrote about Ukraine, and even not once: in total on that day there were 52 news. All about the fact that in the center of Kyiv the Russian State Duma ex-deputy Denys Voronenkov was killed.

The second most widespread event was also not entirely “internal” news – the cyberattack with the help of the virus Petya.A. collected 46 headlines. And only in third place was the event that Ukraine “generated”: there were 35 news on the day of the first decision of the Stockholm arbitration tribunal between Naftogaz and Gazprom. 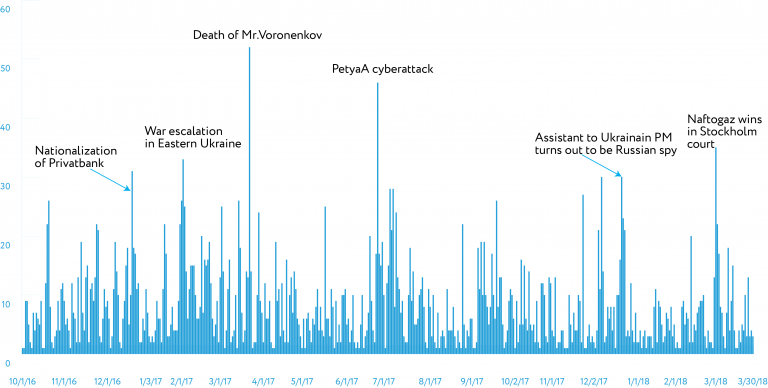 Military actions in eastern Ukraine remain the top theme if we analyze all 17 months. Most often the phrase “eastern ukraine” / “east Ukraine” (187 times) appeared in the headlines. The news about the war in eastern Ukraine in most cases contained data on the number of deaths, battles and shelling. After the theme of the war, “tightly” one after another the “IMF”, “Gas” and “Central bank” follow – 139, 135 and 133 respectively. If the first two topics are “always relevant” for Ukraine, the appearance of the National Bank is a bit unexpected. The financial regulator has created a lot of information drives: nationalization of PrivatBank, the resignation of Valeriya Gontareva, negotiations with the IMF, currency exchange operations.

If we track how the Western media has changed over the course of almost 4 years covered by both of our studies, then the war, gas and sanctions were the top issues about Ukraine; the state debt and peace negotiations of the “Normandy Four” disappeared from the “radars”.

Ukraine loses attention of the western audience: news about our country on the pages and websites of the leading world media are less and less every month – compared with the previous research, the number of titles has decreased by 2.4 times. The situation is even more dramatic if you notice that more than half of all news (52%) has been published by the Reuters news agency. The other 13 leading world media outlets had less than 1800 headlines in 17 months.

The information “gap” can be filled with less qualitative and not always objective media or openly hostile to Ukraine – state Russian media. We have researched how much, what and how the English-language Russian media Russia Today, TASS and Sputnik write about Ukraine.

Three Russian media wrote almost as much news about Ukraine as the 14 American and British: 3523 against 3771 respectively. In Russian media the interest in Ukraine has decreased significantly less than in the western. If in the latter there is a drop of 2.4 times, then “the three” Russian state media has cut Ukrainian themes by 1.75 times.

The focus of Russian media is also a war on Donbass, but, unlike western media, they are interested in it much more. The Ukrainian sanctions against Russian banks and the negotiations of the “Normandy Four,” President Petro Poroshenko and right-wing radical activists lag behind.