How long will the Russian war in Ukraine continue? The Russian aggression has no end in sight and so Ukraine should prepare for a war of attrition. In other words, it will be not only a fight of armed forces but also an economic competition. Who can procure more weapons? Who can muster more materiel? Who has larger reserves?

World War II went on for six long years and so it offers some lessons on how to win a war of attrition. Indeed, after initial military successes the Axis countries faced increasingly long odds of winning. The combined economy of the allies in World War II was vastly bigger than the combined economy of the Axis powers. Thus, every day of the war the gap in tanks, airplanes, and munitions widened, making the defeat of Germany, Italy, and Japan ever more likely. Towards the final days of the war, German and Japanese economies were so crippled and limited that they could not produce weapons or even basic goods such as food and gasoline which made their defeat inevitable.

So what are the lessons?

First, war requires an enormous mobilization of the economy. At the height of World War II, government spending on the military accounted for a very large share of GDP: 42% in the USA, 55% in the United Kingdom, 70% in Germany, and 74% in Japan. This means that private consumption had to be restricted. This objective was achieved with a mix of policies ranging from giving incentives to save (more on this below) to outright bans on purchases of goods for private uses. For example, U.S. consumers could not buy new cars between 1943 and 1945.

Second, although capitalist countries preserved market economies during the war, the government played a critical role in allocation of resources. For example, the US government set up a War Production Board  to coordinate production, set economic priorities, and ration resources. The Board was like a central planner: it minimized duplication and waste, coordinated logistics and allocation of scarce supplies, etc. In a nutshell, the generals decided what is needed but the civilian Board decided how to deliver it. In short, even market-based economies became highly centralized to maintain economic integration (production and supply chains) under intense stress.

Third, strategic materials were the largest bottlenecks. All countries had to wrestle with shortages of food, rubber, oil, and other key inputs. The failure of Japan and Germany to secure supply of raw materials made their military operations curtailed if not suicidal (e.g., the largest Japanese battleship Yamato was sent with a one-way supply of fuel to her final battle). The failure of Russian forces to advance in the early weeks of the invasion (some Russian equipment literally ran out of fuel) highlighted the importance of logistics. But the need to establish and preserve supply lines applies to the general economy as well. If there is no fuel, how can the economy run?

Fourth, procurement on government contacts was different. To ensure fast and stable deliveries, the U.S. government switched from bidding contracts to direct negotiations. To de-risk business investments for the war effort, the government offered cost-plus contracts. The government gave larger, more complex, tasks to large firms because they had more organizational capital and so were more likely to deliver the product. Interestingly, subcontracting was allowed but the government encouraged firms to source locally to minimize logistical demands and save fuel. Mass production was critical in lowering costs.

Fifth, wars are hugely expensive and one needs a solid funding model to sustain a high pace of the war economy. For example, Ukraine estimates that it needs $5-7 bn per month (approximately 40-50% of monthly pre-war GDP) to keep the war and economy running. With massive demands to pay for more weapons, the governments during World War II had to raise taxes. For example, the number of U.S. households paying income tax increased from 4 million in 1939 to 50 million in 1945. Apart from broadening the base, the Roosevelt administration increased tax rates with 90% tax rate for the top income bracket. But even these colossal increases in tax revenue were not enough and in fact most wars are not financed with taxes (see the table below). The Federal Reserve, the American central bank, not only printed money to directly buy government debt but they also kept interest rates low to minimize the cost of servicing public debt. 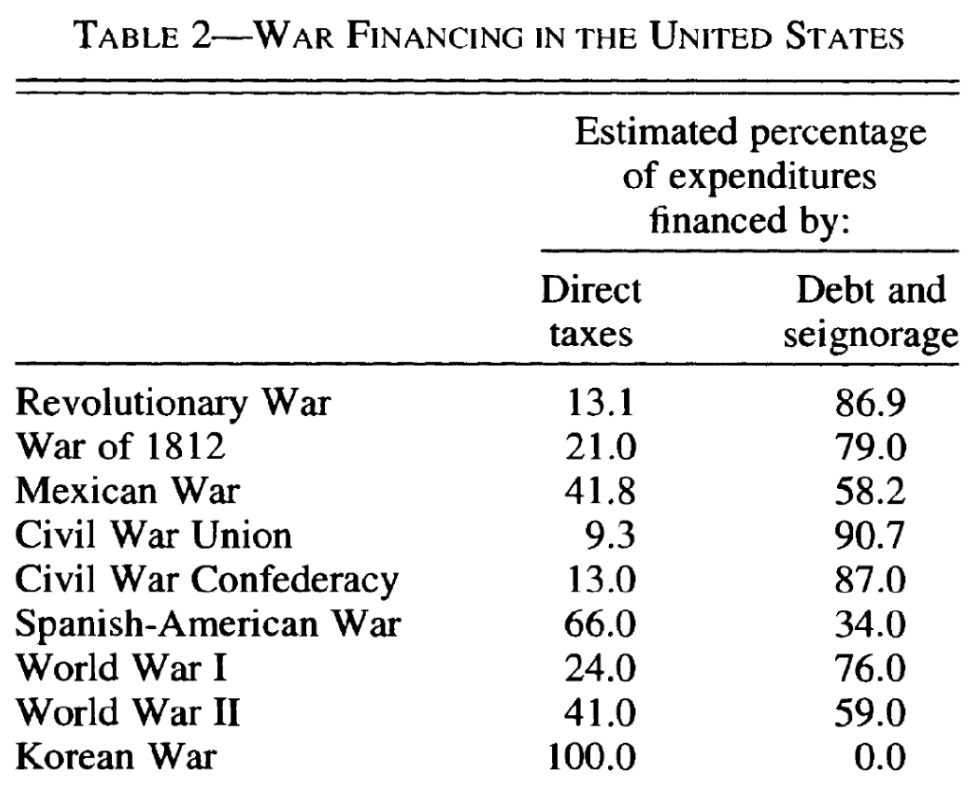 How does one control inflation and maintain high production in this case? In a famous essay “How to Pay for the War”, Keynes suggested that the best solution to financing the war is to strongly encourage (if necessary, force) households, especially the rich and high-income, to save and buy government debt. 85 million Americans (from a total population slightly under 140 million) purchased $185 billion in government securities between 1941 and 1946. In fact, many people (e.g., 95% of employees at General Motors) chose to have automatic deductions from their paychecks to buy war bonds. As a result, only about 40-50% of the war was paid with taxes and the rest was financed with debt and printing money (seigniorage). This approach to contain private spending combined with some price controls allowed the government to fund the war effort without igniting inflation.

The circumstances and times are different for Ukraine. For example, productive capacity in any part of the country is threatened with a Russian missile strike. Much infrastructure is destroyed or not usable (e.g., sea ports are blocked). This limits the ability of the government to raise significant sums via taxes or to reallocate production to safe places. On the positive side, Ukraine has strong support from its allies and receives armament, humanitarian and financial aid so that the need to mobilize resources internally (which includes printing money) is less pressing. But foreign aid cannot be a source of sustained war effort. The domestic economy has to be humming if the country wants to win in the war of attrition. Obviously, Ukraine should not blindly copy every policy from World War II but many lessons (mobilization, centralization, focus on protecting supply and production lines, mass production, etc.) are still relevant. And the government should seriously consider returning taxes which it canceled after the start of the war. The war of attrition is impossible with an empty budget.