“This is our joint reform, and we have to work on it together.” The course finale | VoxUkraine

The online course arose great interest among NGO activists and journalists, we received more than 200 applications. On March 3, we congratulated and awarded the most active participants and those who had all their homework well done on time.

The online course is conducted by the Internews-Ukraine NGO and VoxUkraine as part of a project by the Institute for War and Peace Reporting (IWPR) with the support of the Ministry of Foreign Affairs of the Kingdom of Norway and in partnership with USAID EDGE.

Read notes from the grand opening of the course and the first module on “Privatization”.

Follow the link to read notes from the second module on “Lease”. 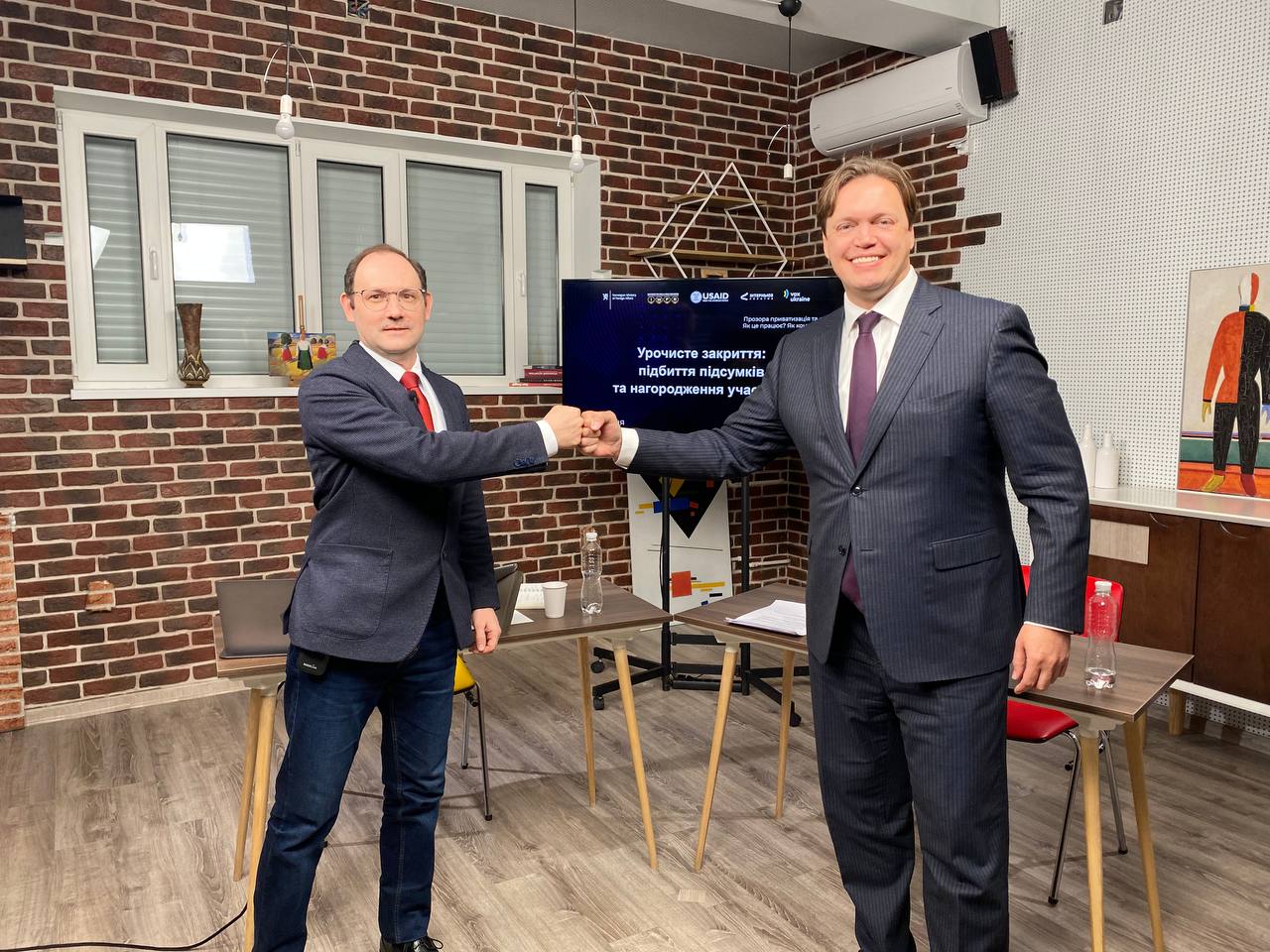 The NGO representatives and journalists from all over Ukraine took part in the course. The speakers of the course did not only share their knowledge, but also checked the homework and gave the points. Therefore, the course was not an “easy walk”.

The three best students are Veronika Khorolska from Zaporizhzhia, an analyst and investigative journalist from the Zaporizhzhia Investigation Center, Dmytro Klymuk from Lutsk, who heads the Legal Aid Center NGO, and Vladyslav Bodnar from the Vinnytsia Investigative Reporting Agency. They were given the opportunity to order an expert dossier from YouControl and to do an internship in organizations of their choice.

All active participants who meticulously performed the tasks of speakers also received mentoring and internship opportunities from Texty.org, TI Ukraine, and VoxUkraine, free access to the YouControl system, subscriptions to NV.ua resources, and Forbes Ukraine magazine.

Deputy Minister of Economic Development, Trade and Agriculture of Ukraine Svitlana Panaiotidi and Chairman of the State Property Fund Dmytro Sennychenko congratulated the finalists and thanked them for their desire to understand the reform and cover it well.

The discussion was moderated by Andriy Kulakov, Director of Program Activities of the Internews-Ukraine NGO.

“We, in the State Property Fund, feel resistance to the implementation of the reform, which is accompanied by myths, manipulations, and information throw-ins. It is extremely important for the public to know the truth, and only you can convey this truth by understanding the essence of the processes that are taking place,” said Dmytro Sennychenko.

Svitlana Panaiotidi also pointed out that it is very important to understand the processes of privatization and lease in order to cover them qualitatively and objectively. “From our end, we tried our best to help you understand how it all happens, so that the coverage would be done not only in the way we are used to — proclaiming a “betrayal!”, but would also be consistent and balanced.”

She summed up that much needs to be done to implement the reform, and that it is activists who can boost privatization and lease locally.

“This is our joint reform, so we have to do it together. I really hope that the knowledge gained will help you to control these processes.“

From the first module to the third one. What have the participants learned?

The first module was devoted to transparent privatization. Taras Yeleyko, Deputy Chairman of the State Property Fund, and Vladyslava Hrudova, Head of the Project Office of Prozorro.Sales SOE, spoke about the difference between large and small privatization, what is the secret of success in the effective sale of assets, where to look for information about objects of privatization, and also what the Prozorro.Sales system is and what are its advantages.

Lecturers of the second module, Vladyslav Uryvskyi, project manager of Prozorro.Sales and Anna Ulyanytska, freelance advisor to the First Deputy Chairman of the SPFU, spoke about the regulatory framework of the lease, the subjects of the lease, what is the lease of the first and the second type, how lease and guarantee fee is charged.

During the third module, representatives of Transparency International Ukraine, Texty.org. and YouControl Khrystyna Zelinska, Denys Hubashov, and Angela Pidkhomna talked about how open data can help local journalists and community activists fight corruption, what can be done with the help of the YouControl tool, and how to track common mistakes and violations in privatization and lease lots. 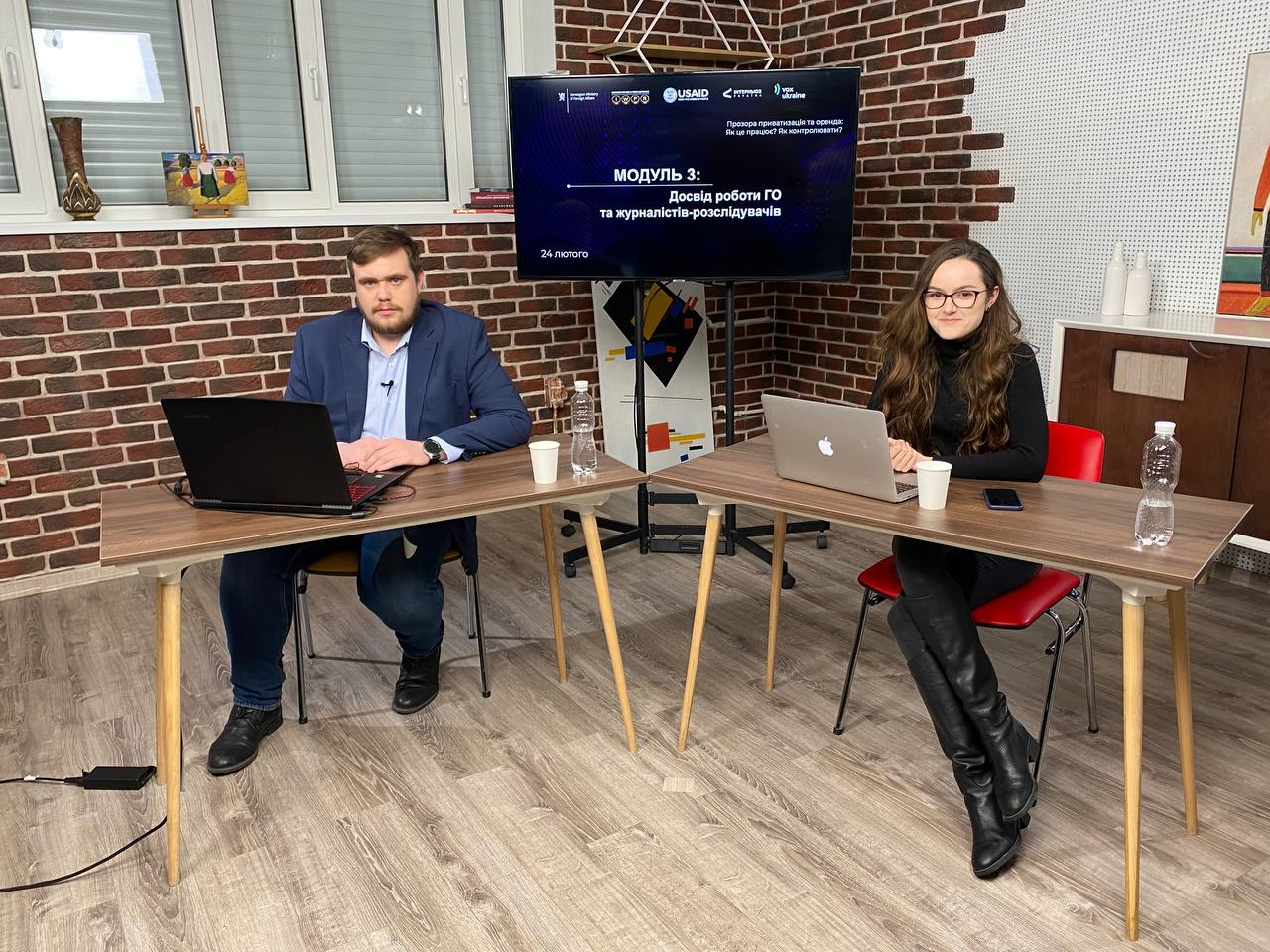 We thank the speakers for their thorough presentation of the material, homework, and feedback, and the participants for their inspiration, motivation, and active participation.

The course would not have been possible without the support of the Institute for War and Peace Reporting (IWPR) and USAID EDGE. We thank donors for supporting important privatization and lease reforms in Ukraine, as well as for creating opportunities for the public sector and journalists to understand these processes.