Three Russian myths that you should abandon right away

Three Russian myths that you should abandon right away

Russia is destroying Ukraine and wants to destroy the free world. Russia seems strong only because the collective West chose to be weak. For 80 years it has been proclaiming “Never again”. Yet now it is passively watching while “again” is happening. It must protect its values, stand up with Ukraine and destroy the evil empire – before it is too late.

USSR was not a nation. It was a prison of peoples, a reincarnation of the Russian empire. So-called Soviet Republics were annexed by Russia by force after they proclaimed their independence in 1917-1918. Ukraine was fighting the Russian invasion during 1918-1921. The scenario of this war was dreadfully similar to today’s assault: Russia installed a puppet government in Kharkiv, and this government invited Russia “to protect a young communist republic”. The same tactic was used by the USSR in its attack on Finland in 1940.

During the 1920s, many people in Ukraine and other republics were developing their languages and cultures while villagers rebelled against the collectivization policy. The Soviet empire suppressed this national renaissance by engineering a famine (Holodomor) that killed 4.9 million Ukrainians and 1.5 million Kazakhs in 1932-1933. Later, it shot the brightest people. Despite this merciless repression, the fight for Ukraine’s independence never stopped. It intensified during and in the aftermath of World War II, when the Ukrainian Rebel Army fought both Hitler and Stalin troops. This fight was suppressed by the 1970s but it never ceased.

Inside, the USSR fiercely imposed the Russification policy, promoting the narrative that the Russian language and culture were superior to all others. For the outside world it promoted the narrative that all artists, sportsmen, scientists, musicians and other representatives of the ‘soft power’ drafted from all the former republics were Russian. Thus, the USSR was largely perceived as a monolith Russian state, and many were caught by surprise when it collapsed in 1990-1991.

Today’s Russia is perceived as a monolith state too because it continues to suppress other nations, many of which would not have stayed within this “federation” if they had a choice. Chechnya is a well known example but there are more. Udmurt professor Albert Rasin set himself on fire in 2019 to protest against Russification and suppression of Udmurt language and culture. Thus, do not be surprised to see a dozen new independent states on today’s Russian territory.

Myth #2. Russian people will stand up to Putin’s regime

Russians still live in the imperial paradigm. They believe that they are a superior nation – better than all other nations. This may sound insane but polls show that after the invasion into Ukraine on February 24th Puting’s approval rating increased from 65% to 71%. And after the annexation of Crimea his approval rating skyrocketed to 86% (see figure 1). 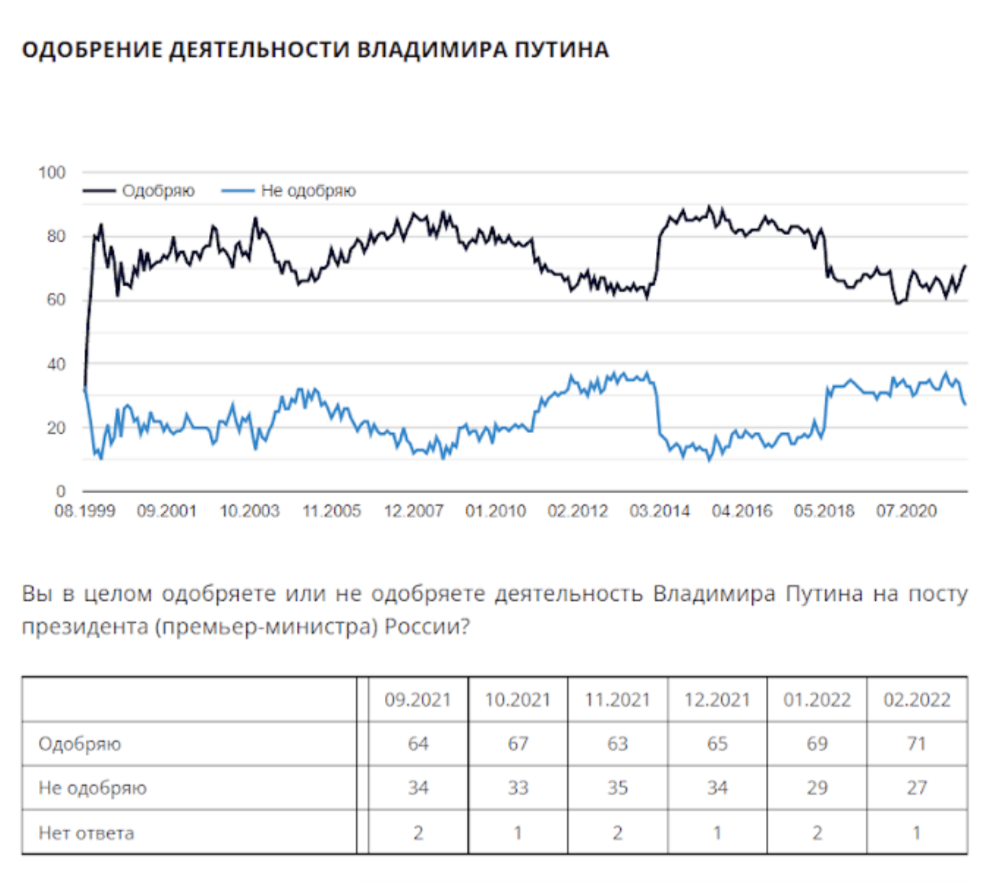 Since 2012 Russians put Stalin into the first place among the “greatest people of all times and nations”, and Lenin is ranked second or third. Both were bloody maniacs. But both were praised for years as geniuses. Although after Stalin’s death some information on the scale of repressions became available, few people really wanted to look at this information and comprehend the size of the tragedy. Thus, Putin’s narrative of Stalin as an “effective manager” fell into the fertile soil. His propaganda is generally very effective. We personally know families where parents believed Russian TV more than their own children. It’s total brainwashing. And if you want hard numbers, look at figure 2. 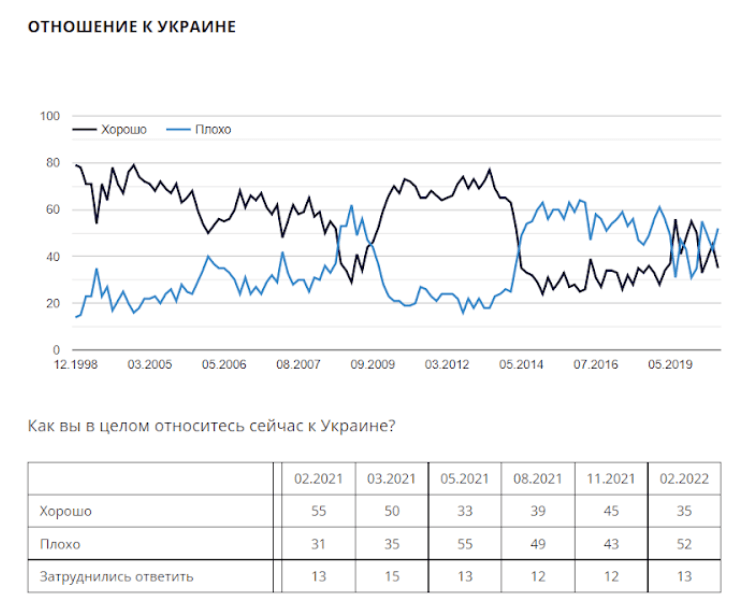 One can clearly see how the generally positive attitude of Russians to Ukraine during the 2000s abruptly changed to negative in 2009, when Russia blackmailed Ukraine and Europe with cutting off gas supplies (the accusations then were that Ukraine “steals” Russian gas). And one can clearly see how a negative attitude towards Ukraine started to prevail in May 2014, soon after Russia annexed Crimea. Not long before that, during the Revolution of Dignity, Russian propaganda started dehumanizing Ukrainians calling them ultra-right, nazi etc. as well as talking about “violation of rights of Russian speakers”, although Russia itself, being a totalitarian state, violates the rights of any person, independently of the language.

Thus, we can thank those brave Russian people who protest against the war but we should not expect any significant numbers joining this protest movement any time soon.

What about Russian oligarchs? Will they remove Putin when they see their wealth frozen? Again, highly unlikely. He doesn’t trust even his closest friends such as the Minister of defense Shoigu, and all oligarchs are afraid of Putin. In fact, they are not oligarchs because they do not have any political power. These are just Putin’s minions who are allowed to steal from Russia’s budget.

This does not mean that sanctions on Russia should be lifted any time soon. On the contrary – sanctions should be hardened, and any loopholes in them must be closed. Because every dollar that comes to Russia now is essentially financing the terrorist state.

A popular narrative is that the USSR together with the US and other allies defeated Nazi Germany and its allies in 1945. A common Russian narrative is that Russia liberated Eastern Europe. However, if you ask Poles, Czechs or citizens of Baltic countries, you will hear the opposite opinion.

Historians know very well that Stalin is responsible for unleashing World War II to the same (if not greater) extent as Hitler. In 1939 Russia and Germany did not have a common border and thus a war between them was impossible – until they jointly invaded Poland. Yet, because “you don’t judge the winners”, in people’s heads all the blame is with Germans and all the suffering with Russians, despite the fact that the major massacre took place on the lands of Poland, Belarus and Ukraine. While Germans underwent their denazification after 1945, Russians never did. And now Russia is a classic nazi state with a mainac on the throne and population hating the entire world. It is destroying Ukraine and threatening to destroy the planet.

However, in reality Russia is no superpower. It’s a paper tiger. It’s GDP is about 2% of the world’s, it has second place in the world by alcohol-induced deaths, and although it blackmails Europe with gas supplies, about 30% of its households don’t have natural gas. Russia seems strong only because the free world chose to be weak. For years Russia corrupted European and US politicians, proliferated fake news and cleaved Western societies along every possible line – from racial issues to vaccination. Now the civilized nations need to wake up and confront the evil. Together they are much stronger than Russia. They only need to unite and act.

The famine organized in Ukraine by Stalin in 1932-1933 is recognized as a genocide. Now Russia is performing a genocide in Ukraine again. It has already killed over 2000 civilians, including children. Back in the 1930s the world could pretend that it did not know. Now everything is live on media and social media. Will you just keep watching? Or will you stand up to this giant with feet of clay and destroy Russia before it destroys Ukraine and the free world?