Turbo-mode of the Ukrainian Government: Reforms in the 4th Quarter of 2019 | VoxUkraine

The ‘turbo-mode’ has become a commonly used word to describe a rapid (often with violation of procedures) voting for draft laws by the new Ukrainian parliament. The speed has born its fruit – in the 4th quarter the iMoRe value did not fall below 0.7 points and peaked at 1.7 points. The last time the index was that high in 2015. It reached the same or higher value only four times in its history.

During the 4th quarter of 2019, 71 reforms were evaluated by the iMoRe experts. The average score for a reform was 1.1 points. The reforms mostly affected Business Environment and Public Finance. The lowest number of reforms was observed in the Energy sector. The Governance sphere “caught up” two anti-reforms and became the most controversial.

The majority of reforms were conveyed by the Verkhovna Rada – 55 new laws. The Cabinet of Ministers initiated 10 regulations, the National Bank of Ukraine – 6. Three anti-reforms were observed during the period.

The main events within the 4th quarter of 2019 are:

In the 4th quarter, three laws got negative estimates from iMoRe experts.

Experts’ opinions are polarized over two laws. Final grades (the medians of individual grades) for these laws are 0.0 points, but the laws received both positive and negative grades.

???? A significant progress was observed in the Business Environment sphere. For the last 3 months of 2019 there were 25 important changes. They mainly touched three areas:

In October 2019, Ukrainian enterprises were allowed the voluntary use of national standards (iMoRe 119). Previously standards were mandatory, which was a relic Ukraine inherited from the USSR. The EU uses voluntary approach to standardization, and by signing the Association Agreement Ukraine committed to implement this approach. This is one of the conditions that will allow Ukraine to join ACAA agreement and to receive the so-called industrial visa-free regime.

Ukraine is aiming to simplify the customs’ procedures for reliable companies. They can obtain the status of an authorized economic operator (iMoRe 121) and fast-track through the border, i.e. skip the line while going through customs formalities, use special lanes, self-seal goods to be moved across the border etc. One more regulation related to customs, the Law 202-IX, not only protects intellectual property rights during movement of goods across the border of Ukraine but also defines and allows so-called parallel imports (iMoRe 122). Now, in order to bring products to Ukraine legally, it is not necessary to be an official dealer of the original manufacturer as long as the products are manufactured by a company that holds the intellectual property rights for it or has the permission of the original manufacturer.

Yet another law simplified the work of accountants (iMoRe 121). It allows to pay all taxes and fees except for VAT and excise taxes to a single account.

The problem of verification of social payments is quite acute for Ukraine. For example, the Ministry of Labor and Social Policy found out that in January 2019, more than UAH 32 million UAH (3.5%) of state social assistance was provided to citizens who falsified the data in their applications. The procedures and mechanisms of verification are set out by the special law (iMoRe 124). To implement the law, in December 2019 the Government launched the State Social Service created at the end of 2018. The Social Service should start working in 2020. It will verify and control social payments. Before that, local social protection authorities were performing inspections themselves, which clearly created a conflict of interest and incentives for them to not find any violations. Simultaneously the government will continue to monetize subsidies – the rules for that were included into the State budget-2020.

To improve the government debt management, the Cabinet of Ministers established a special agency – the Debt Management Office. It will implement debt issuance and management functions previously performed by the Ministry of Finance.

Public procurement procedure was improved this fall. The law 114-IX (iMoRe 120) introduced personal responsibility for violations of procurement law, a new effective anti-dumping tool, and improved the mechanism of judicial appeal. This law is a step towards harmonization of Ukrainian public procurement with international standards. In addition, the government decided to use Prozorro.Sale system for sale of debtors’ property (iMoRe 119). This decision opens the door for implementation of the new Bankruptcy Code adopted in summer-2019.

???? During the 4th quarter of 2019, 20 significant changes were recorded in the Governance sphere. They affect anti-corruption, state property management, decentralization, selection of civil servants and work of directorates.

The National Anti-Corruption Bureau and the State Bureau of Investigations received the right to wiretap suspects without permission of the State Security Service (SBU) and court orders (iMoRe 120). Anti-corruption CSOs and Ukraine’s international partners have been advocating for this change for years. Exclusion of the SBU and courts from the investigation significantly lowers the probability of leakage during investigation of anti-corruption crimes and crimes of top-officials.

National Agency of Corruption Prevention, although created in 2015, did not function properly because of its organizational design – decision-making there had to be taken by the consensus of all five members. The new law gives the decision-making power to the Agency director selected via an open competition with participation of international experts (iMoRe 120). The agency is responsible for control of e-declarations submitted by Ukrainian civil servants.

The new government is determined to find a more efficient management for state-owned property than the state (iMoRe 120). This will be done in two ways – privatization and concessions. In the 4th quarter of 2019, the parliament adopted laws that considerably simplify both. The first law cancelled the list of objects prohibited from privatization (however, other laws still ban privatization of strategic objects such as weapons producers or nuclear power plants and natural monopolies such as gas transit system or railroads). The new law on concessions is the third attempt to launch concessions in Ukraine (the first attempt was in 1999, the second one in 2018). Both of the previous laws were inoperational. Since recently two ports have been concessed, the third attempt may be more successful.

The decentralization process enters its final stage (iMoRe 124). This stage implies mandatory merger of communities that did not merge voluntarily during the last five years. To facilitate the process, oblast councils who often blocked mergers were excluded from it – now it’s totally the responsibility of the executive branch.

The last but not least are the next steps in the civil service reform.The Cabinet of Ministers decided to create directorates in all the Ukrainian ministries (iMoRe 124). Directorates will be tasked with specific policy-development projects. Since 2017, directorates (units responsible for policy development in support of the government strategic goals) were created in 10 pilot ministries. Their experience is quite inspiring. To attract more people with various experiences to the state agencies, the Cabinet of Ministers simplified the competition rules for civil servant positions (iMoRe 123). Today, even 0 points for solving a situational task does not prevent a candidate from competing for the position.

In the fourth quarter of 2019, the new parliament and government adopted a lot of reformist legislation. Although there were some anti-reforms, the majority of adopted legislative acts were positively evaluated by iMoRe experts. 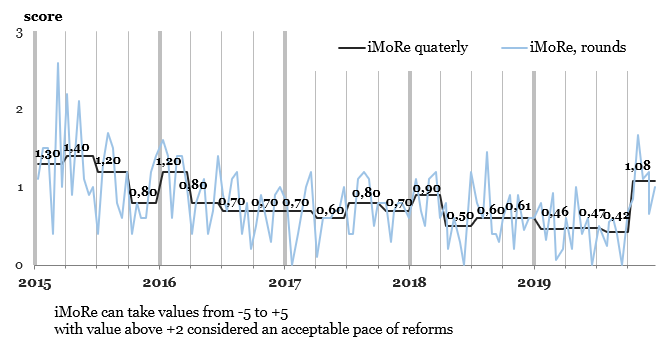