Communicating its actions and shaping public opinion is an important part of the government job. Twitter is one of the most efficient ways to deliver a message both to Ukrainian and foreign audiences. Yet, we found that only three of seventeen Ukrainian ministries have professionally run Twitter accounts while five do not have Twitter accounts at all. This is a disappointing signal on the quality of the middle-level government staff, which is also responsible for development of technical details and implementation of reforms. Raising the average quality of bureaucracy may be no less important for long-term economic growth than fighting corruption and oligarchs

The Ukrainian version of this post was published by The Ukrainian Pravda website on April, 3, 2015. Since then, a number of ministries have cleaned up or fixed their Twitter accounts.

Ukrainian economy is in a dire state. The reasons are well understood. First, Russian aggression. Second, lack of political will, vested interests and oligarchs, corruption, distortions in the economy and weak institutions.

But what if there is a blind spot? What if the competence of the army of the government bureaucrats is more important than corruption or the political will?

This article is an attempt to move the discussion in that direction.

In order to attract attention to the question of competence inside the middle level of the government, we have decided to look at the government communication.

Communication with the general public is an important part of the government job. A recent survey of VoxUkraine showed that there is a striking difference between public and expert perception of the ministries’ work. Kyiv can focus on talking, in secrecy, to the residents of Pechersk offices and key foreign stakeholders. Yet, this will not change the public perception of the government in the oblast administrative centers such as Zhitomir or even in Kyiv non-central district Sviatoshino… The void will be filled by populist politicians like the head of the Radical Party Liashko and strong-worded pseudo-experts, depriving the government of the control of the narrative.

Lack of clear communication with the public leads to confusion and distrust. The public trust in the government and the president has reached low 30%s (and striking 22% for the prime minister and 8% for the political parties). The drop in trust a year after replacement of the government is consistent with trust dynamics after the Orange Revolution in 2004. If the government is not trusted, it won’t be able to govern. The window of opportunity is closing.

In this post we look at one specific part of communication: government Twitter accounts. Why Twitter? Twitter is perhaps the best way to quickly and effectively communicate with domestic journalists and the only way to deliver a message to wide foreign audiences. Outside of Ukraine, Twitter is important. For example, in Germany, it has been used to predict outcomes of elections. In the UK, BBC embarrassed David Cameron when it reported that his Twitter account followed a high class escort service. Twitter also appears to be gaining popularity in Ukraine. Unfortunately, we do not have representative data to back up this observation. Nevertheless, VoxUkraine has seen its traffic from Twitter to steadily increase and recently surpass that from Facebook, Google, and direct contact. Currently, Twitter brings us about 18% of all visits, of which 2/3 are from Ukraine.

The descriptive statistics for the Ukrainian government are at the end of this post. We have found that only three ministries – Defense, Foreign Affairs, and Internal Affairs – use Twitter effectively. Most importantly, we have been disturbed by the incompetence of the administrators of some of the accounts. For example, the Ministry of Infrastructure is subscribed to the Twitter feed of a company selling diapers in Odessa. The Ministry of Regional Development follows Max Rider who describes himself as  “Okhuenno Kontseptualnaya Prodvinutaya Svobodnaya Khuinya”. The Ministry of Finance has chosen to follow a number of fortune tellers and online adult games (the Minister of Finance has a separate twitter account Natalie Jaresko, which is professionally run.)

Twitter accounts are easy to fix. One can easily find online tips for government agencies on how to use Twitter. For example, Govlook provides 15 commandments for government agencies including ‘do not spam’ and ‘monitor your account’. Ukrainian ministries violate several of these commandments. A staff member who takes the communication strategy seriously and understands the importance of the online media can clean up Facebook and Twitter accounts during the first day on the job.

The government staff responsible for the communication strategy might not understand the importance of the online media and management of the general public opinion. They might be used to the old style of communication through groups of trusted advisors, media pundits, and experts. Yet, the world has changed. Sticking to old technologies makes the government weak.

The embarrassing state of the Twitter accounts can be a sign of the general culture in the Ukrainian bureaucracy. If so, changing this culture might be more important than fighting vested interests.

P.S. This post was first published on “Ukrainska Pravda”, a popular online outlet, on April 3rd 2015, and almost immediately some of the ministries started to clean their Twitter accounts.

Here is the data:

– Ministry of Youth and Sport

– Ministry of Energy and Coal Industry

– Ministry of Culture (subjectively,  the one with the worst website)

The other 12 ministries have their accounts as reported in Table 1. The oldest official twitter account was created in 2009 by the Ministry of Finance while the most recent has been created by the Ministry of Information Politics about a month ago.

An immediate observation is that Тwitter accounts of most ministries were created in 2010-2011, but the profiles need updating location and time zone. For example, the time zone of the Ministry of Infrastructure is Greenland.

Figure 2 shows that the Ministry of Internal Affairs has the highest tweets intensity – although its account was created 1.5 years later than that of MFA, it has already posted over 5000 tweets more. Ministries of Infrastructure and Defence each have about 4000 tweets for over three and about 2.5 years respectively. Compared to them, Twitter activity of other ministries is negligible. 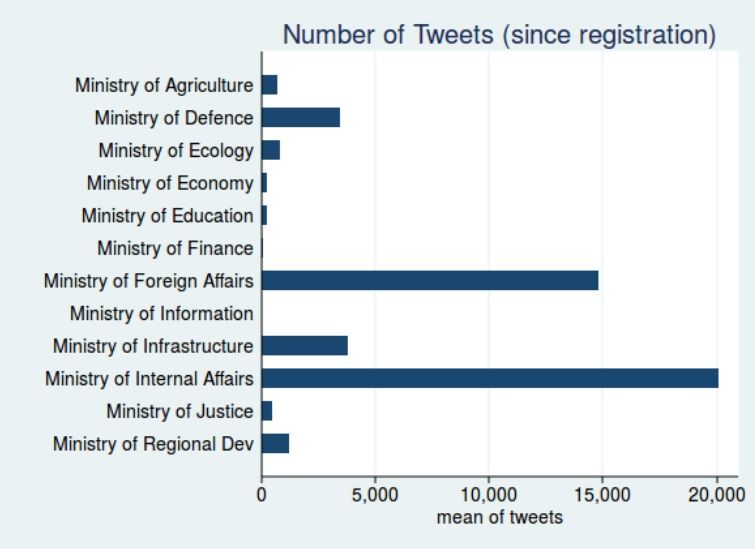 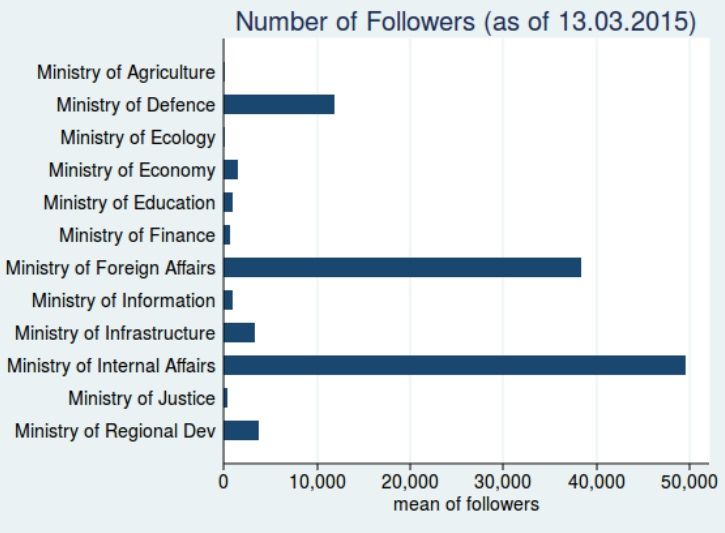 As for the number of following (Figure 4), the picture is quite different – MFA has the highest number of accounts to follow, then go Mininfrastructure and Minfin. 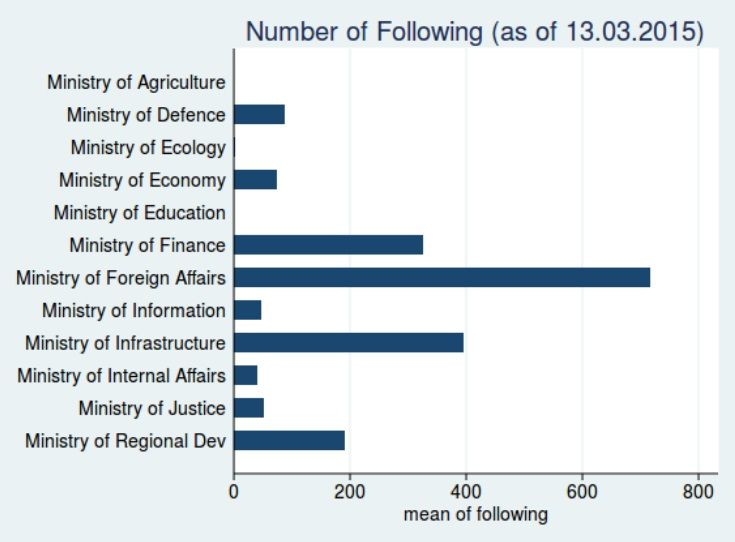 Finally,  Ministry  of Regional Development (@minregion_ua), Ministry of Finance (@minfin_ua) and Ministry of Infrastructure (@minfrastucture) are following very “interesting” Twitter users. Below are the screenshots.

In conclusion we would like to say that it is essential for Ukrainian ministries to communicate about their activities through all channels, including Twitter. First, we recommend all ministries without a Twitter account to start tweetings. Nowadays, publishing information on a ministry website and in a minister’s Faceboook account might not be enough. Second, it would be great if ministries with Twitter accounts updated their profiles. Be careful whom you follow and learn from scandals in the Western world. Last but not least is to improve the quality of PR through Twitter. Some ministries lack followers mostly because of low quality of content. 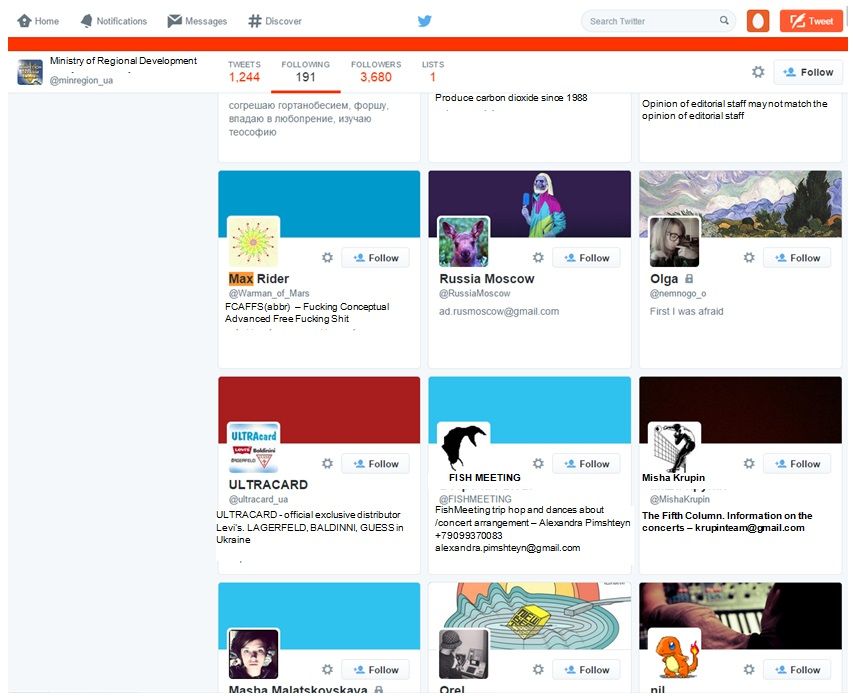 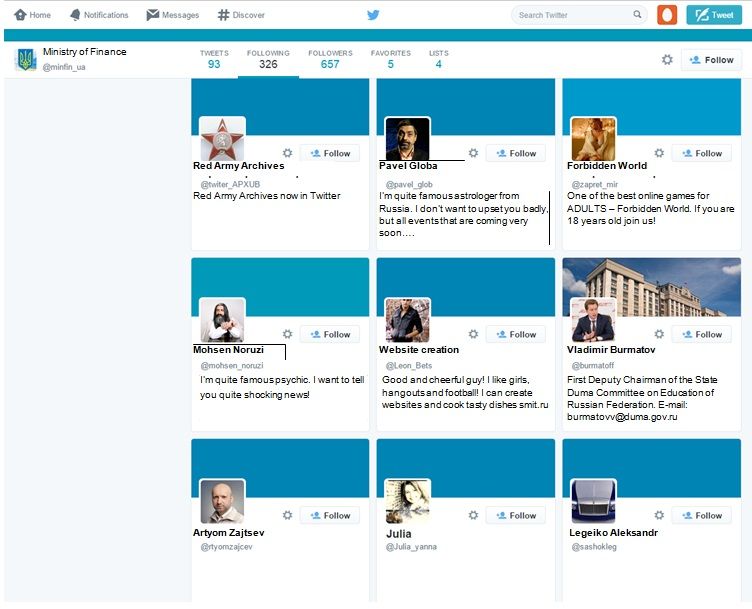 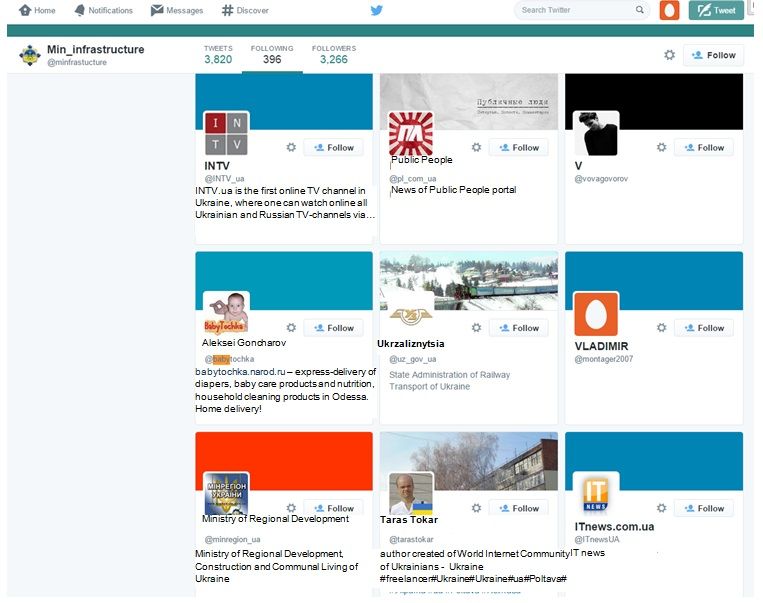 The article was published also on UkrPravda