Ukraine poisons the russian military and forces its own to bequeath their organs. A Review of Health Care Narratives. Issue #14

Ukraine poisons the russian military and forces its own to bequeath their organs. A Review of Health Care Narratives. Issue #14

In the week between August 18 to 24, russian propagandists repeated old myths about the development of biological weapons in Ukraine and Ukrainian provocations around the ZNPP. At the same time, new fakes appeared. Propagandists interpreted the news that Ukrainian commanders were allowed to certify military wills as permission to sell their organs. And the Ministry of Defense of the russian federation announced that Ukraine poisoned russian soldiers in the Zaporizhzhia region.

Disinformation: “Black transplant specialists” will be able to take organs from dead soldiers

Telegram channels linked to russian special services reported that now commanders can certify the wills of servicemen. “Legitimnyi” wrote that this initiative was lobbied by the pharmaceutical lobby – “black and gray transplant specialists”. With reference to anonymous sources, the channel writes that there will be a supplement to each will, stating that in the event of death, the soldier bequeaths his organs to the state or for “good purposes.”

“They need this paper to export organs abroad. Look at the price list of organs in the West, and you will understand that almost every Ukrainian soldier is a walking “million bucks”, – pro-kremlin sources write.

First, the so-called “black transplantology” in Ukraine is a myth that cannot be verified by logic and facts. Transplantation operations involve the engagement of a large number of specialists (more than 150) and equipment, they cannot be carried out secretly somewhere in the basements. Without proper conditions and specialists, it is impossible to carry out even simple organ harvesting. And the organs themselves, after extraction, remain viable for a short time, during which it will be challenging to take them out of the territory of hostilities, not to mention abroad. 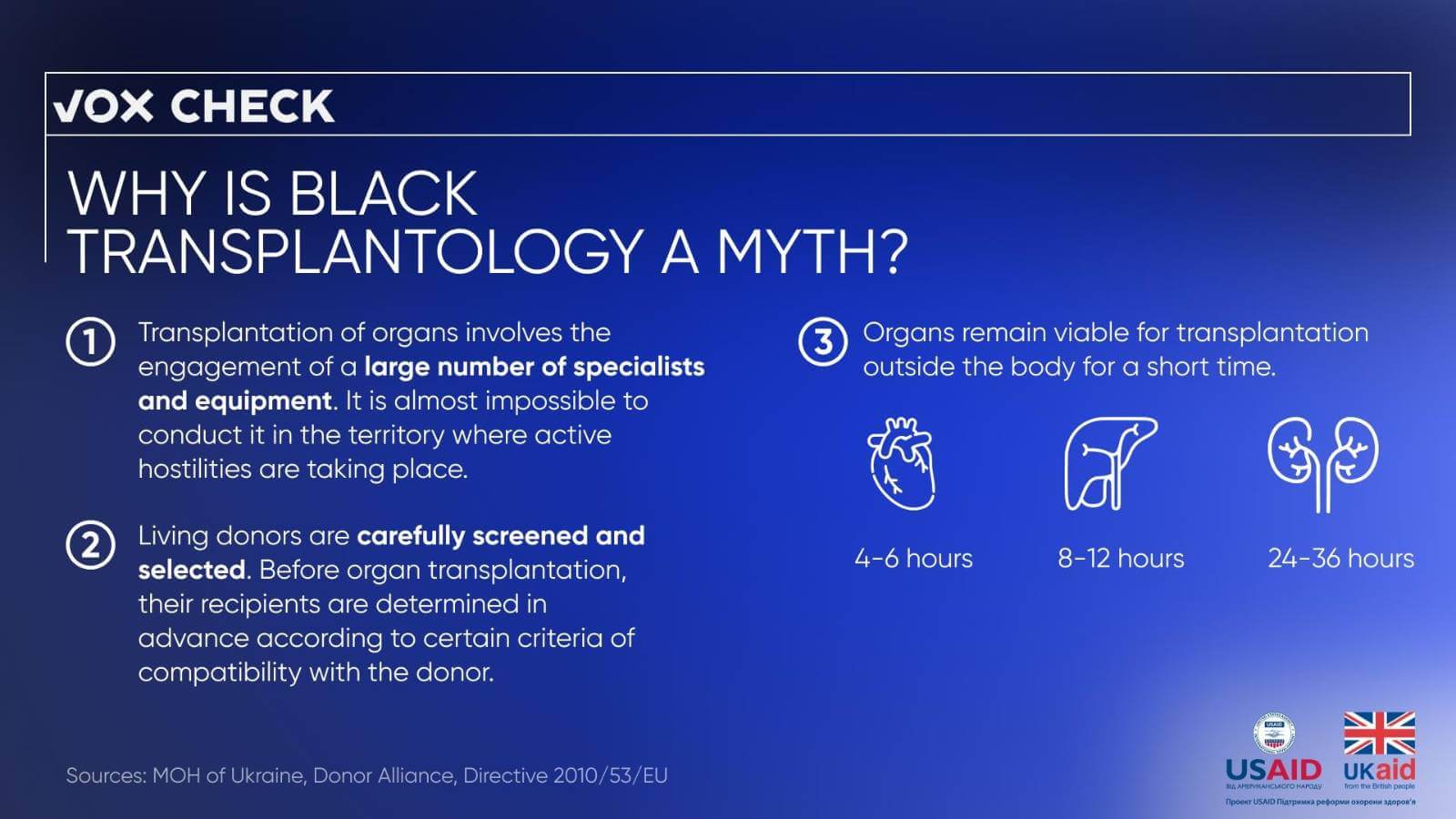 After the full-scale invasion of russia, disinformers began to spread more fakes about “black transplant specialists” in the ranks of the Armed Forces of Ukraine. Earlier, we refuted the fake that organs were being taken from the military and locals with pro-russian views in Donbas.

Second, the government did allow commanders to certify military wills. On August 16, the Cabinet of Ministers approved a ruling allowing military servicemen’s wills to be notarized by notaries and commanders of formations under martial law. However, the ruling refers only to wills and not to any other documents.

Thirdly, according to the current legislation, to become an organ donor after death, you need to provide written consent: fill out an application and give it to the transplant coordinators. Or you can submit a written application for the appointment of an authorized representative who, after the person’s death, will give consent to the removal of organs.

Disinformation: Near the borders with russia, in Ukraine, the USA was developing biological weapons

The russian media wrote en masse that the United States was developing biological weapons components right next to russia’s borders. Thus, the Pentagon violated the articles of the convention on biological and toxic weapons. This was stated by the Secretary of the Security Council of russia, mykola patrushev. He said this was proven by analyzing projects carried out in Ukrainian laboratories.

Patrushev did not give any example of such a project. Therefore, we remind you what projects in russia used to be called “evidence” of the development of biological weapons in Ukraine:

These are just a few examples of numerous russian fakes about US “biological developments” in Ukraine. Russia has never published documents that prove the existence of biological weapons development projects in Ukraine.

The UN emphasized that they have no evidence that Ukraine was engaged in developing biological weapons. US representatives at the UN have expressed concern that russia is making such accusations against Ukraine to justify its own use of biological or chemical weapons in Ukraine.

Director of the Institute of Biochemistry, named after O. V. Palladin and the head of the Biosafety and Biosecurity Commission at the NSDC, Serhii Komisarenko, explained that Ukraine does not even have laboratories for the creation of biological weapons. Biological weapons were never developed, manufactured, or stored in Ukraine — the entire Soviet legacy remained in russia.

Disinformation: The West and Ukraine are carrying out nuclear blackmail against russia

The russian media again used the comment of the pseudo-expert Scott Ritter, which we mentioned in the previous monitoring issue. This time, he said that the West, together with Ukraine, is trying to force russia out of the territory of the ZNPP through nuclear blackmail. Allegedly, Ukraine is constantly shelling the station and shifting the responsibility to the russian federation.

At the same time, the Ministry of Defense of the russian federation assured that there is no russian heavy equipment at the ZNPP and its vicinity, but only “guard units”. Also, according to the Ministry of Defense, the Armed Forces of Ukraine were preparing a provocation on August 19, the day of the UN Secretary General’s visit to Ukraine.

Ukraine and Western countries are interested in ousting russia from the territory of the ZNPP because it violates the basic rules of nuclear safety.

Back on March 3, the IAEA Board of Governors condemned in a resolution the forcible seizure of nuclear facilities and other violent actions by russia, as they pose serious and direct threats to the safety of these facilities and their civilian personnel. This significantly increases the risk of a nuclear accident or incident that endangers the population of Ukraine, neighboring states, and the international community. The organization called on russia to immediately stop activities at nuclear facilities so that the Ukrainian authorities would restore control over them.

Already in August, the Director General of the IAEA stated that the shelling of the ZNPP on August 5-6 violated all seven foundations of nuclear safety:

As we reported earlier, it was russia that was responsible for the shelling of the ZNPP on August 5-6.

In the IAEA report published on September 6 after a visit to the station, experts again noted that during the entire period of occupation of the ZNPP, the mentioned seven safety principles were regularly violated.

Russia is deploying military equipment at and near the ZNPP, threatening nuclear safety. On August 25, British intelligence published satellite images of the ZNPP in which russian armored personnel carriers and trucks can be seen 60 meters from the plant’s reactor. 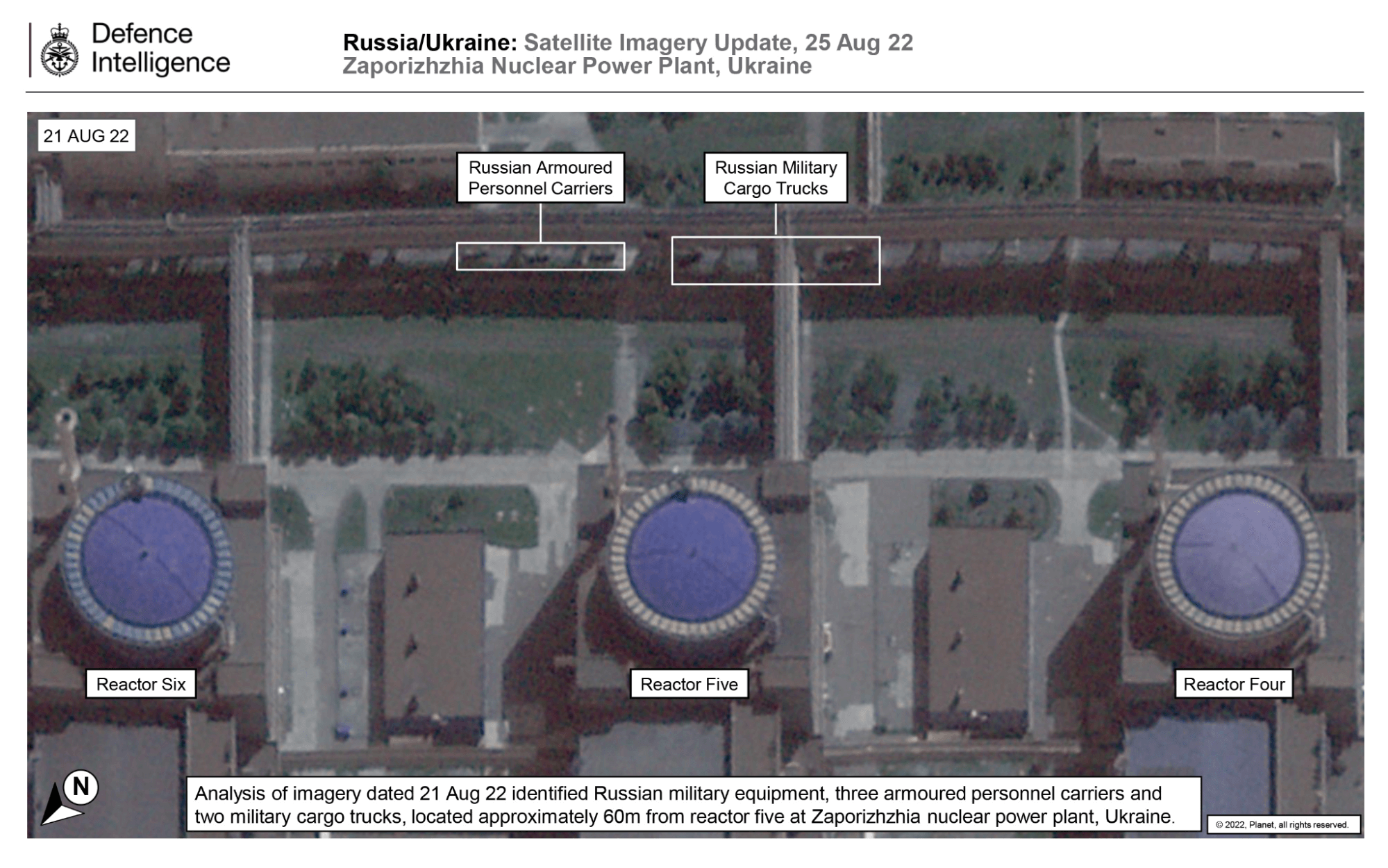 Military equipment of the russian federation at the ZNPP, August 21, 2022. Source: British intelligence

The IAEA’s September report also mentions the placement of military trucks on the first floor of turbine halls in power units #1 and #2. To ensure the complete safety of the station, the IAEA emphasized the need to withdraw russian equipment from the territory of the ZNPP. 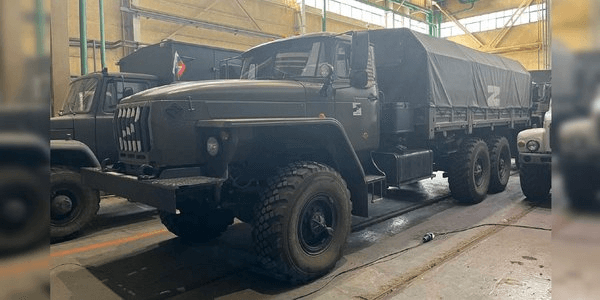 It is also known that russian MLRS are firing from the territory of the ZNPP. On September 3, The Insider published a video showing the work of russian rocket artillery right next to the station. Representatives of the Pentagon also confirmed that the russians are firing from the zone around the ZNPP.

So all the evidence indicates that the only violator and provocateur in this story is the russian federation.

On August 20, the russian Ministry of Defense invented a new “crime” of the Ukrainian authorities: allegedly, on July 31, near the occupied Vasylivka in the Zaporizhzhia region, russian soldiers who suffered severe poisoning were taken to the hospital. Doctors discovered in them a poison of artificial origin — botulinum toxin type “B”. The Ministry of Defense promised to send the evidence of the “chemical terrorism of the Kyiv regime” to the Organization for the Prohibition of Chemical Weapons (OPCW) shortly. Court russian experts immediately “explained” that the Ukrainian military had used a poison that had been in service in the United States for a long time.

If the russian military really got poisoned, it was only because of their own negligence.

Botulinum toxin is a toxin produced by the bacterium Clostridium botulinum. The most common way to become infected with botulism in household conditions is the use of poor-quality, expired preservation in which this bacterium has produced toxins.

Ruslan Leviev, an analyst from the Conflict Intelligence Team, suggested that the russian soldiers could have been poisoned by poor-quality dry rations or homemade preserves taken from residents.

Mykhailo Podolyak, an adviser to the head of the President’s Office, also stated that the military could have been poisoned by expired food or alcohol.

It became known about the poor food supply of the russian army in the first days of the full-scale invasion. For example, on March 1, a video appeared on the Internet in which the Ukrainian military showed russian dry rations, the expiration date of which was in 2015. 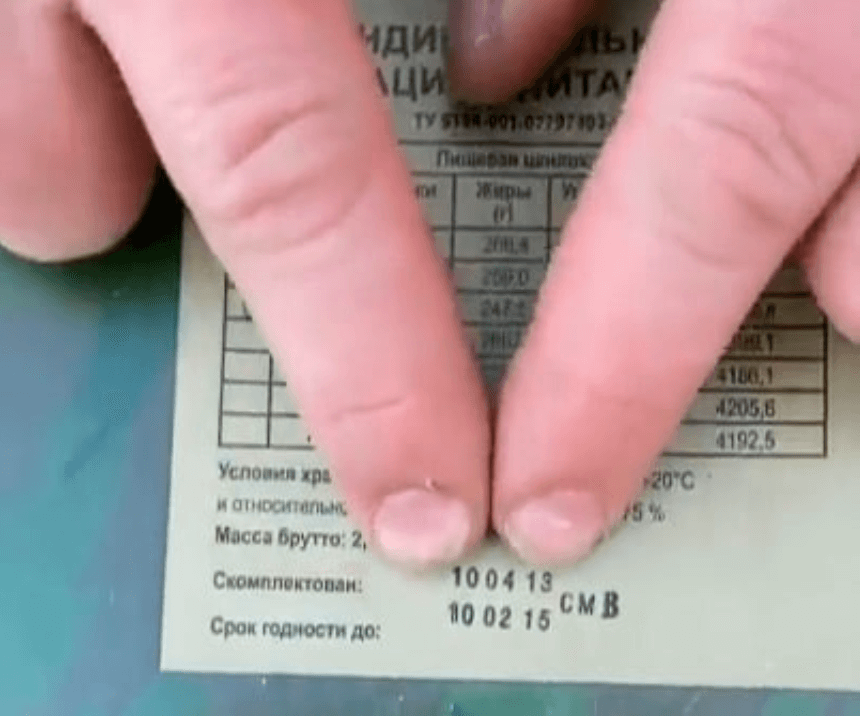 Russia often accuses its opponents of what it is constantly doing. Thus, in recent years, russia has used chemical weapons at least twice: in the poisoning of former russian spy Sergei Skripal in 2018 and the poisoning of russian oppositionist Alexei Navalny in 2020. By the way, specialists of the OPCW, to which russia plans to complain about the “chemical terrorism” of Ukraine, confirmed that Skripal and Navalny were poisoned with the nerve agent “Novichok”.