UNFOUNDED: Ukrainian side shot a column of refugees near Severodonetsk

UNFOUNDED: Ukrainian side shot a column of refugees near Severodonetsk

On March 16, there was information being spread on the Internet that “Ukrainian Nazis” had shot a column of refugees between Rubizhne and Severodonetsk, injuring 200 people. It is claimed that refugees from the Luhansk region are fleeing to the territory of the so-called LPR. At the same time, in Severodonetsk itself, the “People’s Militia of the LPR” allegedly surrounded the Ukrainian military in a ring. 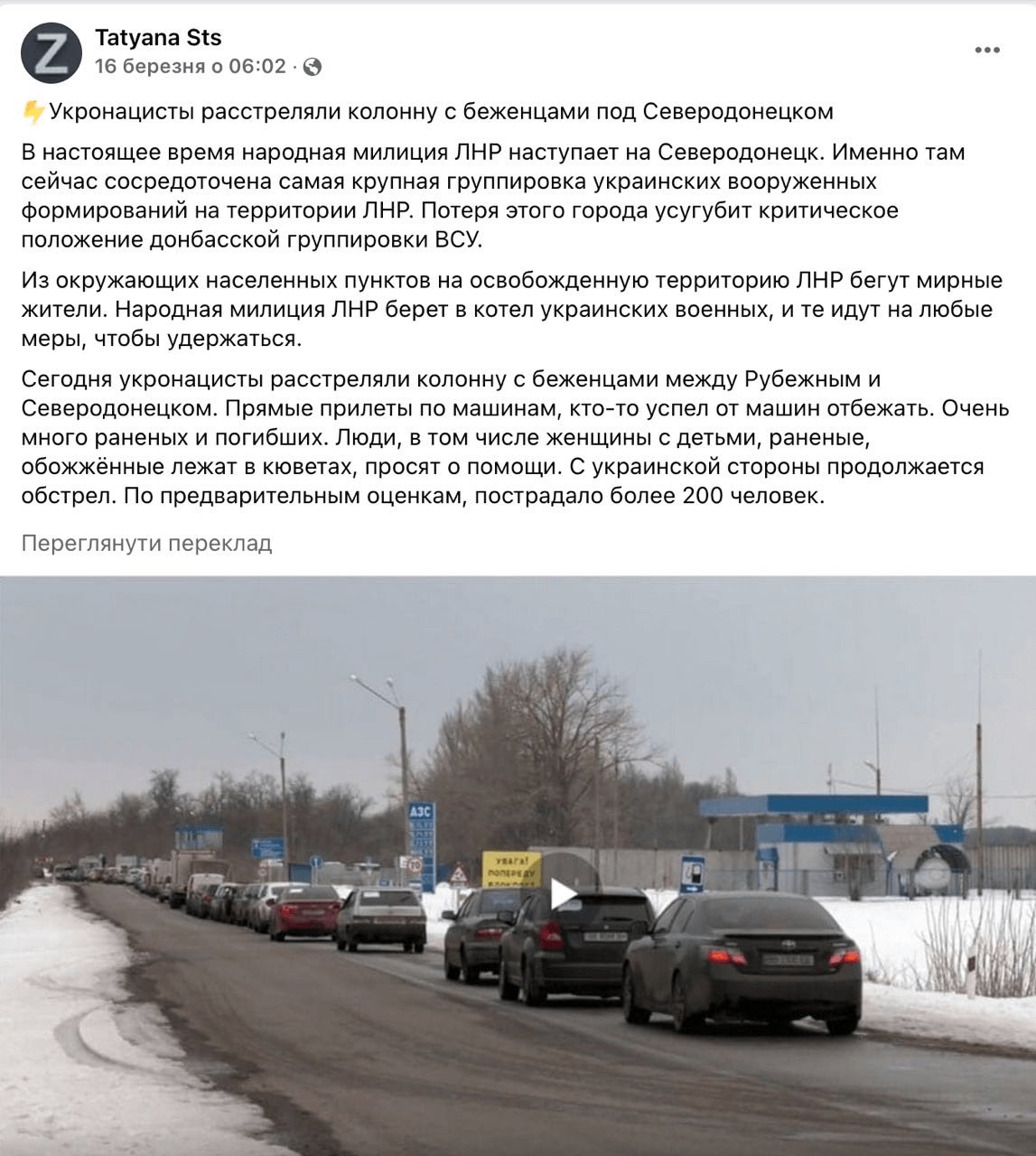 However, such statements are unfounded. It is noteworthy that the authors refer to the so-called “people’s militia”, illegal formations not controlled by Ukraine, which will perform security and law enforcement functions in the self-proclaimed republics, whose troops are waging war against Ukraine.

One day before, on March 15, the Russian military disrupted the evacuation of residents of Rubizhne. A bus from Severodonetsk could not pass to Rubizhne due to shelling. 200 refugees were unable to leave the city, which is under constant fire by Russian forces. The head of the Luhansk military administration Sergey Gaidai reported about it . Route from Severodonetsk to Rubizhne

In the Luhansk region, the Russian military has repeatedly made evacuations impossible and took people hostage. The occupiers fired on evacuation buses with civilians, such as the evacuation bus from Popasna on March 18.

In addition to it, Russia is obstructing the evacuation of civilians arranged by the Ukrainian government. About 500,000 Ukrainians were forcibly deported from the temporarily occupied territories to the territory of the LPR, the DPR, and Russia. According to the Commissioner for Human Rights in Ukraine Lyudmila Denisova, people get to the so-called filtration camps in the Donetsk region at the first place, then they are taken to Russia. It violates the Geneva Convention on  the Protection of Civilian Persons during the war.

Since the beginning of the full-scale war, Severodonetsk has been under fire by Russian forces.  There is no heating and light in some parts of the city, because the Russians are hitting objects of infrastructure, as well as residential buildings . As of April 11, the city is under the control of Ukraine, the evacuation of the population continues.