Ukraine’s decentralization reform, which began in 2014, is praised as a success story. The first communities who decided to amalgamate were moving into “unexplored territory”, and could not be sure that the reform would not be reversed. The rapid pace that the process manifested since the beginning, evidenced a large level of demand for bottom-up transformation. Considering the first two cohorts of the amalgamation process in 2015-16, we find that wealth of communities, as well as previous historical experiences with local self-governance in the Austro-Hungarian Empire and Poland, were particularly important drivers of the pioneering first movers of decentralization.

The decentralization reform that Ukraine passed in 2014 has set the Country in a new path towards boosting local development and enjoying a healthier democracy. It has also turned into one of the most popular reforms in Ukraine today and portrays one of the few success stories praised by international partners of Ukraine. Before 2014, Ukraine consisted of over 11,000 small and dispersed communities. These communities were required to address the central authorities, represented by Rayon and Oblast administrations, whenever a need that would demand any type of resource arose. For the most part, this central administration rules in a soviet minded discretional fashion and is well removed from the daily on-goings of the citizens in the local communities. In this context, government transparency is unlikely to thrive.

With the decentralization reform, communities were allowed to amalgamate into a new level of self-government called Amalgamated Hromada (AH). If communities chose to form an AH, they elected their own new local government, were granted the power to make executive decisions on their own and to collect an important share of the taxes paid locally. Not only did this ensure that income accrued within the community stayed in this community, but it mostly allowed for public goods and services to be provided much more efficiently.

However, for the first communities that decided to amalgamate, there were more doubts than certainties. In early 2015, there were no previous comparable experiences that would serve as reference. The first cohorts of communities that decided to amalgamate had very little idea of what to expect. They were entering an unexplored territory that would require navigation of a steep learning curve. On top of that, it was uncertain whether this reform would succeed and not be reversed short after. A decentralization reform in the middle of a war with the Russian Federation is quite a historical experiment. Moreover, there were also considerable vested interests in Rayon administrations and councils, who would have loved to see the reform fail.

The speed of amalgamation in the following years was beyond expectations. Between 2015 and 2019, more than 4,000 communities have amalgamated into over 1000 new AHs, covering approximately 43.2% of the country’s total territory, and 32.1% of its total population. This means that by the end of 2019, more than 11M people in Ukraine now lived in self-governed communities. Ukrainian and international experts are perplexed by how fast the amalgamation process developed. However, nobody so far looked systematically into the main factors that motivated the first movers. Understanding what are the factors that drove the first cohorts to amalgamate is of key importance, as the Ukrainian decentralization reform might become an important model for other countries. Hence, we have looked closer into the beginning of the amalgamation process.

What are the main factors that drive communities to form AHs?

For economists, money is typically the first logical explanation for any observed behavior, and the rapid amalgamation of the communities is no exception. Therefore, we looked into the impact of local income on the probability of amalgamation. Before amalgamation, rich communities with many local businesses would see their Personal Income Tax (PIT) payments disappearing in the budgets of their Rayons. After amalgamation, however, 60% of PIT would stay with the AH. Amalgamation “to get the money back” seems to be reasonable motivation to drive the results of this reform. Furthermore, local elites could anticipate that local businesses would be willing to be more tax compliant in Personal Income Tax once they knew that these tax payments will benefit the development of their own communities. These considerations motivated us to formulate our first hypothesis as:

The wealthier communities are, the more interested they are in amalgamating.

At the same time, we speculated that past historical experiences may have influenced the communities’ decision to amalgamate. In particular, the oblasts of Lviv, Chernivtsi, Ivano-Frankivsk, Ternopil, and Zakarpattia belonged to the Austro-Hungarian Empire. In addition, the oblasts of Volyn and Rivne belonged to Poland. These seven oblasts have documented historical experience with local self-governance and were only incorporated into the Soviet Union in 1944. When the reform started in 2015, the elder residents in these regions would have had their own memories of what life was like in pre-socialist times, when people had their businesses, and communities could practice local self-governance. Younger people would have had these experiences passed down from their older relatives.

In contrast to this past experience of local self-governance, the rest of Ukraine was exposed first to Zarist and then to Soviet centralism. Zarist Russia at least allowed for private property and private business, but there was little to decide locally. With the arrival of Bolshevik Socialism, things turned even worse. Central and Eastern Ukraine suffered traumatic historical episodes, such as enforced collectivization from the late 1920s and the Holodomor causing millions to die in rural Ukraine. Put differently, in Central and Eastern Ukraine there was no collective memory of any past experience of local self-governance. It was therefore reasonable to expect these regions to be more reluctant to set up their own local self-governments, compared to those parts of Western Ukraine where people could remember times of local self-governments. Under these considerations, we formulated our second hypothesis:

Western Ukrainian regions with diverse historical backgrounds behave differently than the rest of Ukraine in their willingness to amalgamate.

What have we found?

Considering data on budget revenues per capita from approximately 7,400 communities in 2014 and looking into which of those observed communities had amalgamated by 2017, we found that:

These are very interesting results. The particular timeframe we studied allowed us to observe how the amalgamation process looked like by 2017 given the situation of the communities in 2014.

We learned that a 1% higher Personal Income Tax collection per capita in 2014 is associated with a 0.27% higher probability that a community had amalgamated by 2017. We also divided the communities into five income groups according to their level of tax revenues – from the poorest to the richest. In contrast to the poorest group, the three richest ones appear to be increasingly interested in amalgamating. Therefore, it looks like income is actually an important factor. As we can observe in graph 1, the distribution of income is quite heterogeneous across communities. For example, considering PIT, the 75% percentile is approximately 717% richer than the median community. According to our results, the 25% richest communities are almost 194% more willing to amalgamate than a median community.

Graph 1. Personal income Tax and Total Revenues (in logs and per capita) 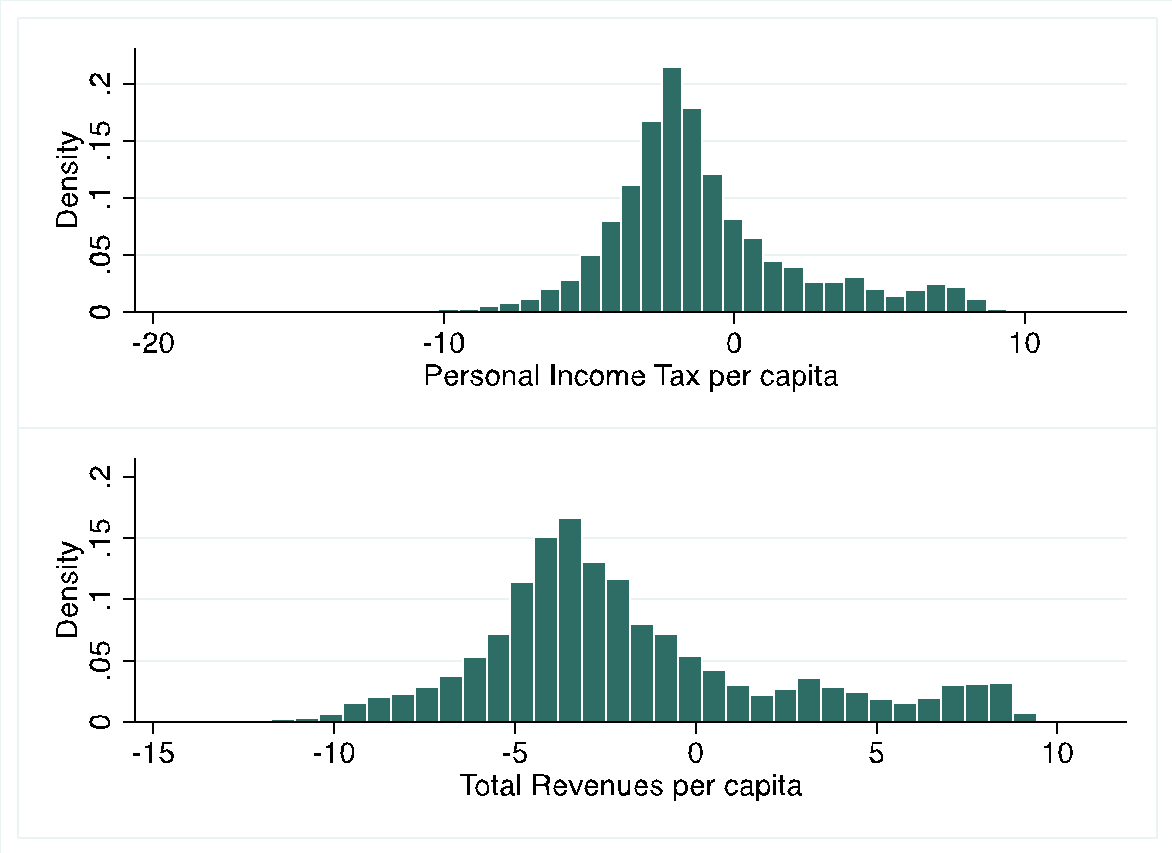 At the same time, we have also learned that historical factors appear to have an impact in the decision to amalgamate. With respect to the rest of Ukraine, former Polish oblasts are almost 2% more willing to amalgamate and former Habsburg communities are 2.8% more willing to amalgamate. These figures might appear rather marginal, but it must be considered that in one of the five regions under Habsburg rule, Zakarpattia, the amalgamation process was completely blocked after arrival of Governor Moskal in 2015, which most likely resulted in a lower fraction of amalgamated communities in the data and affected all empirical results. Without this blockade, we believe that the Western Regions effect would have been much stronger. However, we have to stress the difficulty of establishing a causal relationship between historical experiences and the current decision to amalgamate. Citizens from those seven regions were more likely to travel to neighboring European countries and experience with their own eyes more independent forms of local governments.

What do the results mean for the next steps of the decentralization reform or similar reforms in other countries in the future?

Our results validate a basic assumption of economics: monetary incentives can be a powerful stimulation for leaving dependency from the central state behind to embark on a new journey towards self-government. The budgetary award of being entitled to collect 60% of PIT works with or without a past experience with local self-governance. This conclusion is reinforced if considering total revenues per capita received locally as an alternative measure of wealth. If the Russian Federation, for example, one day would follow the same decentralization reform seeking of a more independent and transparent form of local governance, policy makers can be sure that these types of monetary incentives will be a powerful first incentive.

Additionally, we can see that previous exposure to local self-government provides additional motivation. Historical experiences seem to matter. This observation might be important to consider policies after the wave of pioneers. This would help hesitant communities to see and experience a hands-on example of local self-governments. It would be helpful to convince local elites to go for voluntary amalgamation and new local self-governance. In further research, it would not be surprising to find that the successful experiences of the first movers has become an important driver of amalgamation.

It should be clear that any policy of central government that punished first movers at a later stage of the reform, would be highly detrimental to continue with this powerful bottom-up transformation of a post-Soviet Country like Ukraine. In this context, it is unfortunate that in the Perspective Plans for a final enforced amalgamation of the remaining communities, adopted by the Cabinet of Ministers on 27 May 2020, a significant number of those pioneer AHs were re-organized with a spirit of vertical policy making. Such a policy would put all the new trust carefully built between local self-governments and central state at risk.

Both hypotheses have been tested by means of a logistic regression model. The dependent variable is a dummy equal to one if the observed community has amalgamated by 2017 and zero otherwise. The continuous independent variables are: personal income tax, total expenditures, land and rental tax at the individual and corporate level, and population density. All these regressors are in per capita terms for 2014. The only one that has not been transformed into log form is land and rental tax. Additionally, two factor variables have been used. The first one is the division of the observed communities into income quintiles by total revenues per capita, with the poorest quintile as the base case. The second one is the distinction by oblast, with Ivano-Frankivsk as the base case. In this regression, we had two proxies for wealth that allowed us to test our first hypothesis, personal income tax and total revenues per capita.

The second hypothesis was tested by means of a different specification of the same model, intended as a robustness check. In this case, we took the factor variable that accounts for the oblast where the observed communities belong to, and rearranged it to divide Ukraine into 3 territories. The first one is the group of oblasts that once belonged to the Austro-Hungarian Empire. The second one accounts for the oblasts that once belonged to Poland. The third group accounted for the rest of the Ukrainian oblasts. Therefore, we tested our second hypothesis by observing how the probability of amalgamation behaved among these groups.

In bold, I show the variable that I change for a robustness check that allows me to check the second hypothesis.