UNFOUNDED: Ukraine can "play out the scenario" with a blow to the refrigeration plant in Odessa

The network is spreading information that Ukraine can “play out the scenario” with a blow to the refrigeration plant in Odessa. On April 23, 2022, the head of the National Defense Management Center of the russian federation Mykhailo Mizintsev stated that the Ukrainian authorities could simulate a missile strike on the Western Naval Base (from 2018 – Naval Base “South “), resulting in an explosion of the port’s refrigeration plant which is located 500 meters from the military facility.

He also added that preparations for such a scenario are already underway. Thus, on April 18, 2022, a tank with 10 tons of ammonia was allegedly brought to the enterprise from Odessa, and special services and law enforcement officers in the Odesa region were given personal protective equipment. 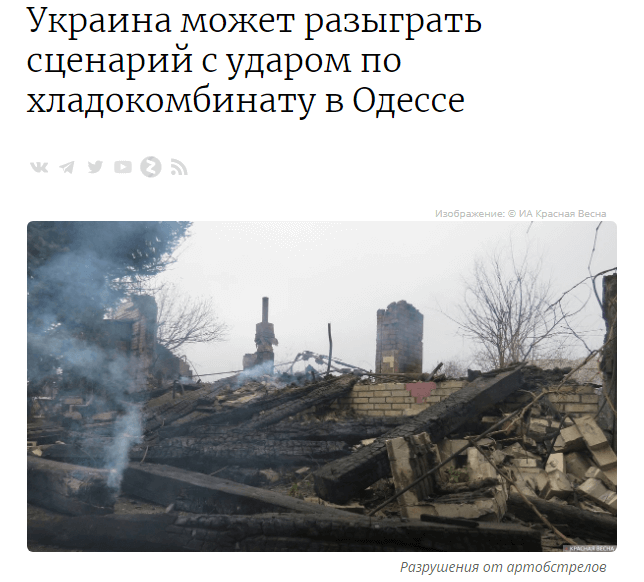 Screenshot of the publication

However, there is no reason to claim that the Ukrainian authorities are preparing a strike on the refrigeration plant in Odessa to accuse russia.

Since March 2022, russia has accused Ukraine of having chemical weapons in order to create an excuse to launch its own attack using the same weapons.

The Center for Combating Disinformation (JRS) at the National Security and Defense Council has repeatedly stated that the Russian military is preparing chemical attacks. That’s why they periodically launch fakes, as if the Ukrainian military is preparing to “blow up ammonia” or other chemicals. The danger of such provocations is confirmed by the SBU.

Ammonia is a colorless gas with a pungent suffocating odor, well soluble in water, explosive, toxic. Ammonia is lighter than air, so shelters, basements and lower floors should be used for protection.

First aid if getting ammonia poisoning:

In order to justify its own actions, russia has accused Ukraine of launching a missile strike on the Western Naval Base. In fact, it is the russian federation that is striking at Ukraine’s maritime infrastructure. On April 23, after a “warning” from the russian Defense Ministry in the Odesa region, the Ukrainian military shot down two cruise missiles flying in the direction of the Pivdenny port. The difference between russia’s announcement of a future “Ukrainian provocation” and russia’s missile strike in the direction of the port is about 3 hours.

Russia has repeatedly stated so-called provocations by the Ukrainian side before carrying them out. For example, on the night of April 7-8, 2022, warnings appeared in the telegrams of self-proclaimed groups in  Donbas for Kramatorsk residents not to evacuate by rail. On April 8, russian telegram channels reported that the Ukrainian military and equipment were aimed at the shelling, but later edited the reports. Other channels that disseminated these reports said that the attack on the station was a provocation by the Ukrainian side.

Earlier, we denied the fake, as if “Ukrainian nationalists” mined tanks with ammonia and chlorine in Sumy. This was stated by the russian Armed Forces on the eve of the russian troops shelling the Sumykhimprom plant. As a result, ammonia leaked.