Voting Data Suggests What Ukraine’s New Coalition Will Look Like

VoxUkraine forecasts the potential composition of the future coalition inside the Ukrainian parliament, having analyzed the dynamics of real (not formally proclaimed) relations between the parliamentary groups.  We have analyzed all important votes in the current parliament and discovered how the real coalition structure has been changing, which inter-faction links have weakened, and how the activity of MPs has been changing. What do the numbers reveal?

Is there a ruling coalition in Ukraine, and if not, when did it fall apart? A formal response may be given by those lawyers who understand the intricacies of Ukrainian parliamentarism. The speaker of the parliament has already provided an informal reply.

I do not have to announce the dissolution of the coalition, there are no such provisions. However, there are less than 226 MPs in the coalition at the moment. This means that it is dysfunctional, the Chairman Volodymyr Groysman declared on March 24.

The death of the “European Ukraine” coalition  was confirmed on March 29, when the party “Batkivshchyna” (led by Yulia Tymoshenko) refused to re-enter it and the Radical Party of Oleh Lyashko has formally confirmed its earlier decision (made in September 2015) to leave the coalition.

According to a pollby the Kyiv International Institute of Sociology, Batkivshchyna would win the parliamentary elections, if they took place in the middle of March (winning 18.6% of votes of those who would go to the polling stations). It would be followed by the “Opposition Bloc” (13.2%), “Petro Poroshenko Bloc” (11.4%), “Samopomich” (10.9%), and “Radical Party of Oleh Lyashko” (10.9%). The largest factions, BPP and “People’s Front” (PF), have lost much of their electoral support (almost 50% and more than 90% respectively). Therefore, it is precisely these two factions that are going to keep the coalition alive, as long as it suits them.

In order to identify a likely composition of the coalition, we have used the network analysis tools and analyzed the votes cast by MPs during the last three parliamentary sessions. We have exclusively considered votes for laws “as a whole”, since it is at this stage that MPs adopt or decline a draft law. These votes reveal the actual composition of the coalition and opposition in the parliament. There have been 1072 votes for draft laws “as a whole” during the three sessions of the sitting parliament.

First, we have analyzed the way the structure of the parliament has been changing over time. We have divided the relevant period (Dec 2014 – Feb 2016) in three equal intervals and constructed the network of votes for each interval (fig 1). You can find a more detailed information about the construction of voting networks in the article VoxUkraine Report on Voting Patterns in Rada: The Real Coalition and is Samopomich a Dissenter? 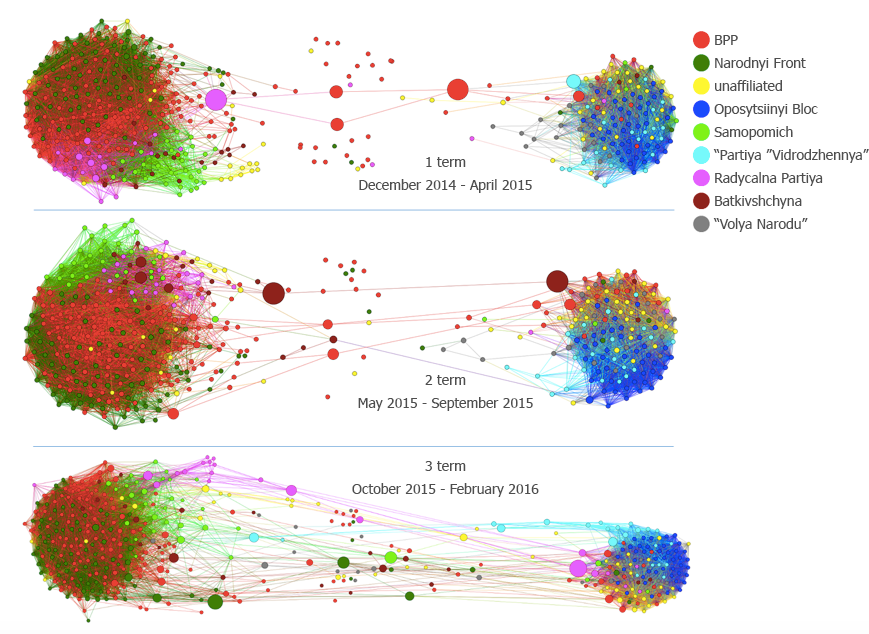 We can make three conclusions based on the results:

These data show that “the de facto coalition” keeps losing members, which makes it seek cooperation with “the de facto opposition”.

This argument is confirmed by the dynamics of the index of the plenary activity of parties. This index is calculated as the ratio of the sum of votes “for”, “against” or “abstained” to the total number of votes. The higher the index, the more often on average do MPs of a given party actually cast their vote (fig. 2).

Figure 2. The Index of plenary activity of factions

The indicators of BPP, PF, Batkivshchyna, independent MPs and Samopomich are quite similar. The index of PF has fallen most – from 70 to 51%. MPs of this faction stopped supporting the “de facto coalition” in 2015, after announcing the withdrawal from the coalition. Yet this drop has been compensated by the rise of the indices of the group “People’s Will” (by 10%), “Revival (Vidrodzennia) Party” (by 9%) and the Opposition Bloc (by 13%).

Table 1. The number of interconnections between the MPs of different factions

According to the Constitution of Ukraine, in order to be legitimate, the coalition has to include at least 226 members. As BPP and PF are not willing to face unscheduled parliamentary elections, these two factions are going to take two vacant places in the coalition.

Given the dynamics of the aforementioned indicators, the RP is not going to be part of the coalition. Therefore, the two possible options are Samopomich and Batkivshchyna. Most probably, despite the tough preconditions for joining the coalition, set by Yulia Tymoshenko, her faction is going to take the third place. Firstly, the dynamics of the aforementioned indicators for her faction is more conducive to joining the coalition, than for Samopomich. Secondly, “Batkivshchyna” is more cohesive as a faction and does not expel its leading MPs, punishing them for indiscipline.

Thus, we get BPP (137) + PF (81) + “Batkivshchyna” (19) = 237 members. It is also possible that seven independent MPs from the informal group “Svoboda” join the new coalition in exchange for some political dividends. We have underlined their cohesion in the article VoxUkraine Report on Voting Patterns in Rada: The Real Coalition and is Samopomich a Dissenter? A certain insurance mechanism will be provided by the cooperation with “the de facto opposition”. This argument is supported by an increase in the number of connections between the MPs of BPP, PF and “the de facto opposition” MPs.