VoxUkraine Report on Voting Patterns in Rada: The Real Coalition and is Samopomich a Dissenter? | VoxUkraine

VoxUkraine Report on Voting Patterns in Rada: The Real Coalition and is Samopomich a Dissenter?

Summary of the results: There is a healthy core that votes together. Samopomich does not dissent, with very rare exceptions. This is good news. It suggests that the parliament is functional and is capable of resolving differences and passing legislation.

At the same time, the core excludes some of prominent civil activists and includes some members of the parties outside of the coaltion, including some from the Opposition Block. This is potentially bad news. It hints at dissent and discontent among some civil activists. It is also consistent with some trading of favors with vested interests and supporters of the previous regime.

Some of those who voted for the draconian laws of Yanukovich on Jan 16 2014 belong to the core, others not. Thus, the overall picture is complex, not black and white.

We have selected 20 laws (see Table 1). The list consists of the laws passed to statisfy the International Monetary Fund, the laws that attained the highest and the lowest scores in iMoRe ranking of reforms in January and February, several populist laws identified in a VoxUkraine article, several key laws such as the 2015 budget and approval of the General Prosecutor.

We use the votes on these laws to build a graph. The nodes of the graph are the deputies of the parliament. Any two deputies are connected if their votes correlated more than x%. We have used three correlation cutoffs 66%, 75%, and 90%.

We present pictures describing the graph, and thus the correlation patterns in the parliament.

The deputies who have more links, and thus whose votes correlated with a larger set of other deputies, are depicted by bigger/fatter circles. Such deputies are intermediaries: sometimes they vote with one group of deputies and sometimes with another. 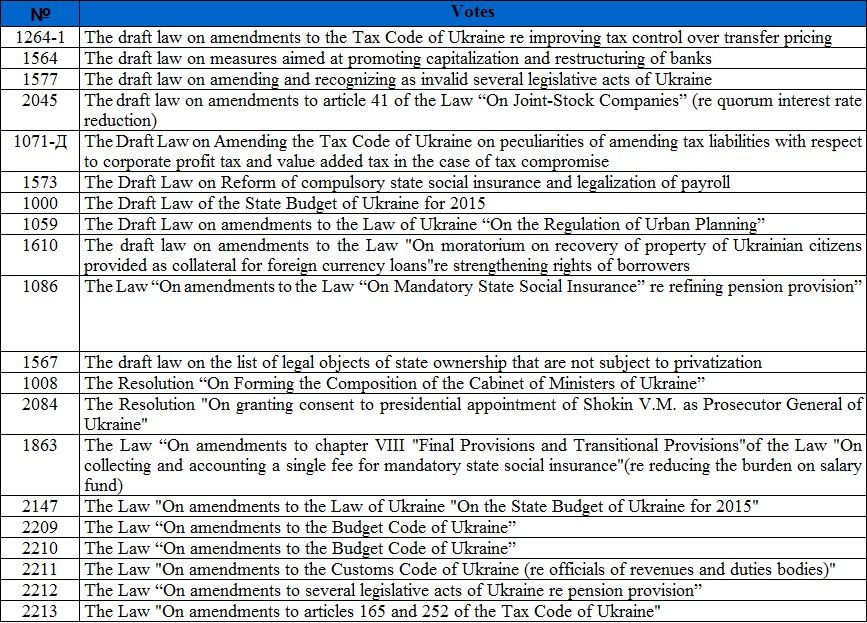 2.The Core of Rada

The following pictures present the graphs constructed for 66%, 75%, and 90% correlation value respectively. (The average correlation coefficient for the parliament is 74%.)
The colors represent factions, as described in the first picture.

At 66%, majority of the parliament constitute a single cluster — a core. Most of the deputies of the Opposition Block and Volya Narody are either at the periphery of the core or outside of it. A number of deputies who do not belong to any faction are also on the periphery or outside of the core. All factions that comprise the coaltion are in the core. Furthermore, the core contains faction Economichnyi Rozvytok, which is not a member of the coaltion. At 75%, the core continues to be strong, and the graph looks quite similar.

Seveal key deputies of the presidential party Poroshenko Block are otuside of the core as well: Kaplin, Nayem, and Leschenko. They do not join Samopomich or any other faction, not form a cluster among themselves.

Illustration 1: Graph of Rada Votes; link if correlation is above 66%+ 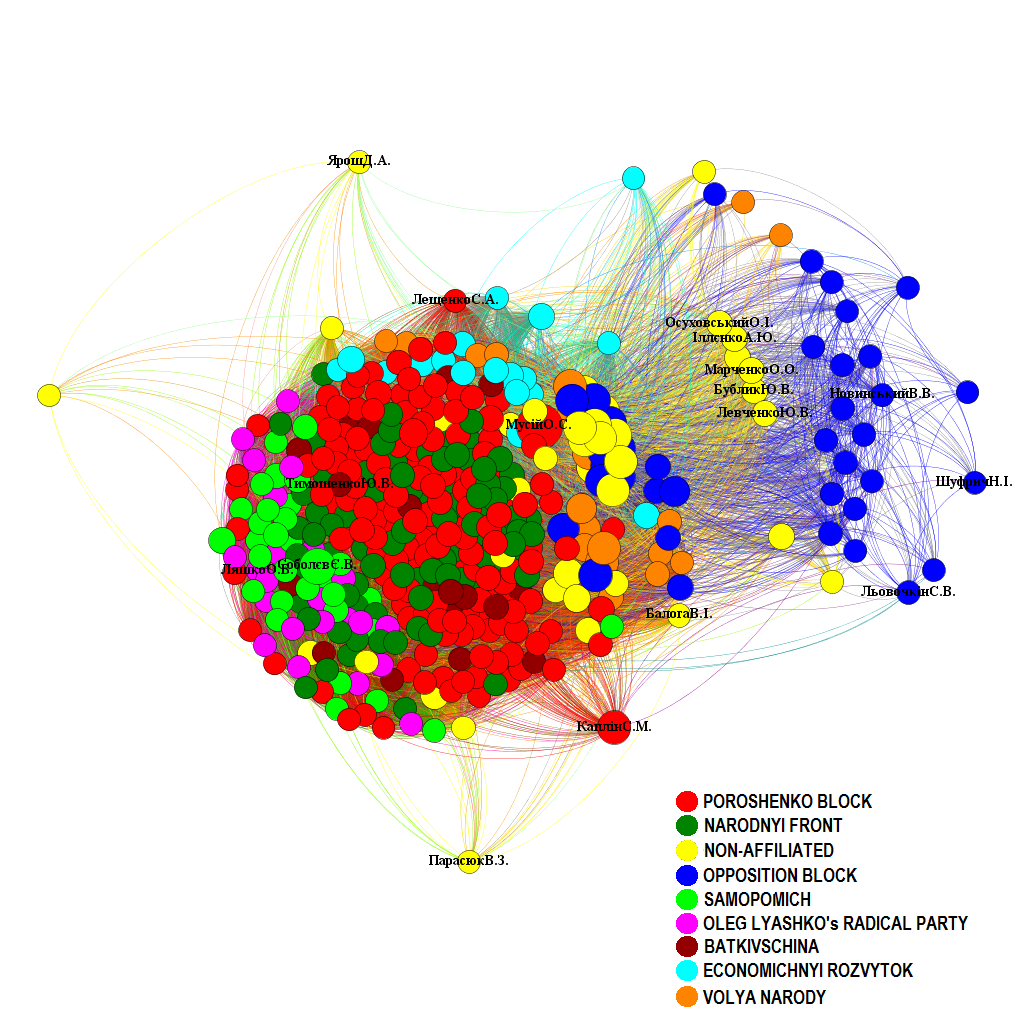 Illustration 2 : Graph of Rada Votes; link if correlation is above 75%+ 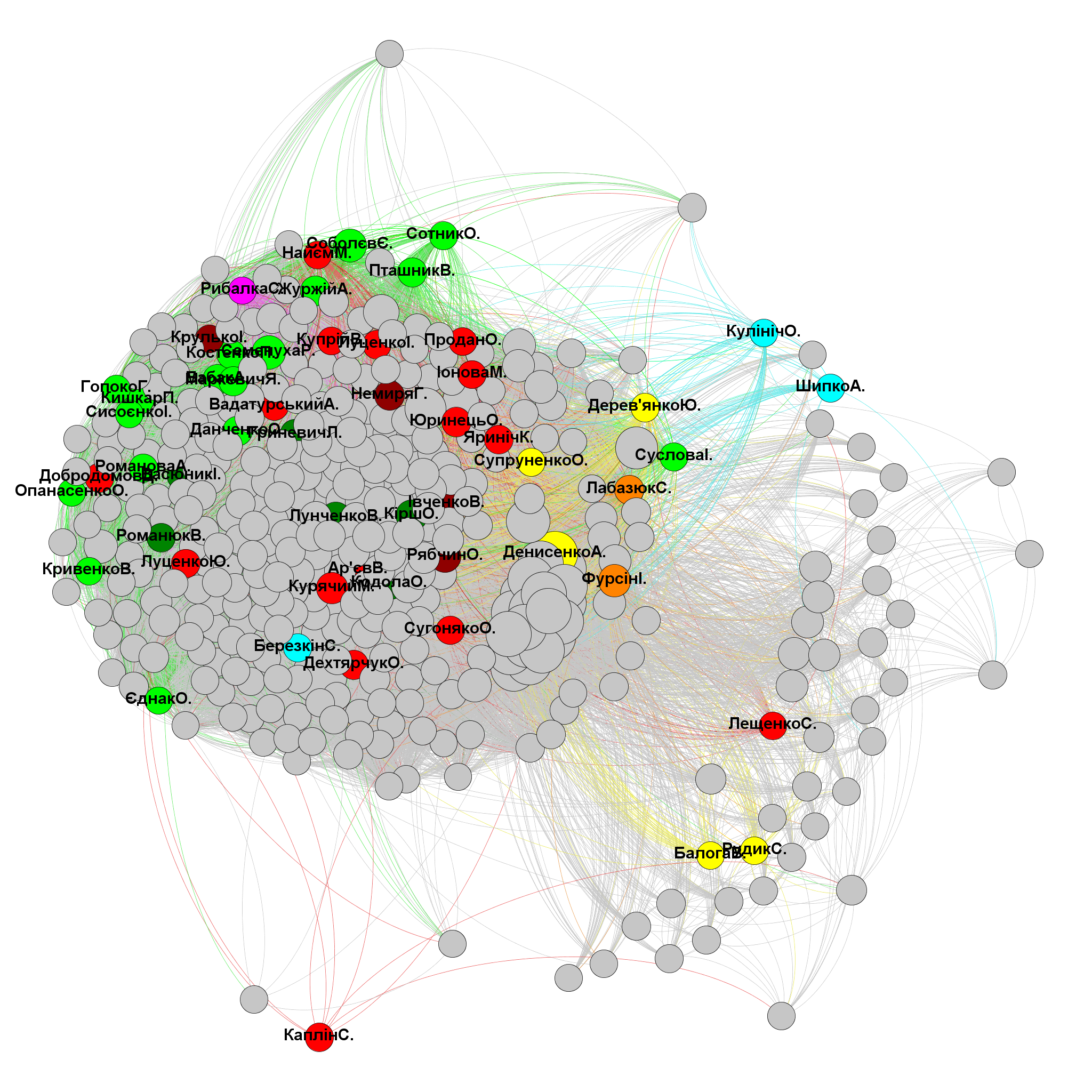 Illustration 3: Graph of Rada Votes; link if correlation is above 90%+ 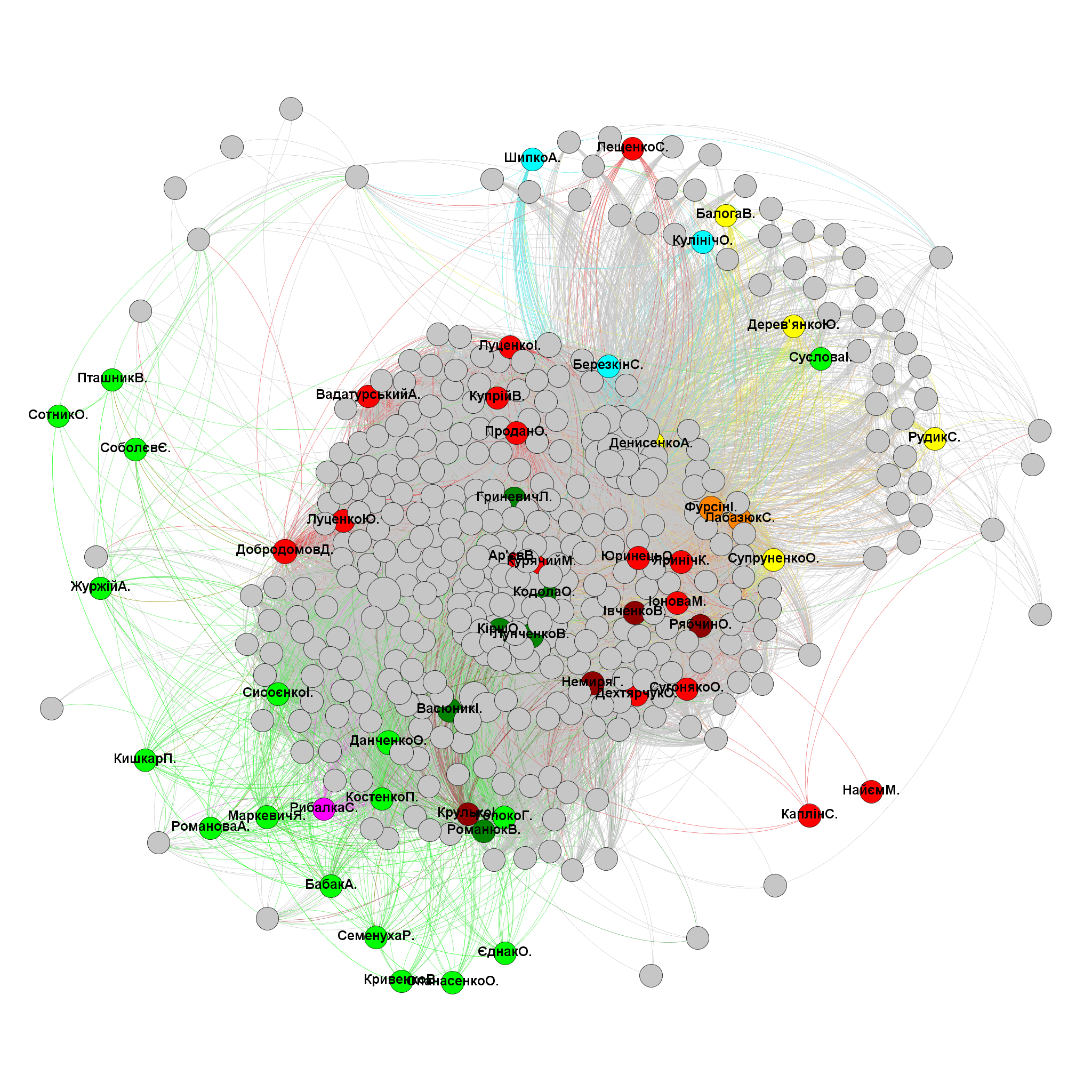 The remainder of the analysis is obtained for the graph with 66% correlation cutoff.

Some deputies vote the party line. Their votes correlate with the other members of their faction. Even within a faction, there can be multiple subgroups that vote together and occassionally disagree with the other members of the faction. Other deputies switch allegiance and can vote with different subgroups within a faction or even dissent from the party line. This type of deputies will be captured through a higher number of links in the graph. Furthermore, there are ways to identify the deputies who have connections with different subgroups of the graph that tend to vote together (factions and subgroups within factions). One such measure is a betweenness centrality, which tells how important an individual node is for others traversing the network. Specifically, this measure gives higher rank if a deputy belongs to the shortest path between two other deputies. The appendix presents the value of centrality for the entire parliament. The following table gives the top 10. Top 3 are Musiy of Block Poroshenko, Sobolev of Samopomich, and Labazyuk of Volya Narodu. 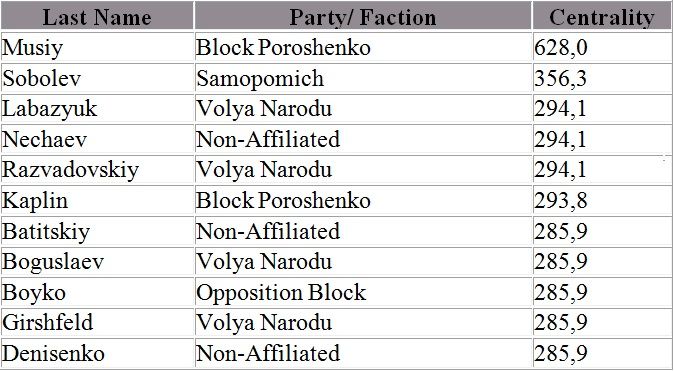 The new parliament contains many new faces. Yet, there are deputies who were members of the previous Rada. Many of these deputies voted for the laws introduced by Yanukovich regime on Jan 16, 2014. The laws cracked down on civil rights and were passed with violation of the procedure.

The following graph highlights deputies who supported Jan 16 laws. We obseverve that a number of these deputies belong the periphery of the core. There is no one in the center with a potential exception of Gerega. This is consistent with the interpretation that these deputies are playing an active, possibly marginal, and definitely not dominant role in functioning of the parliament.

Illustration 4: Graph of Rada Votes; link if correlation is above 66%+; deputies who voted for January 16, 2014 laws are in color 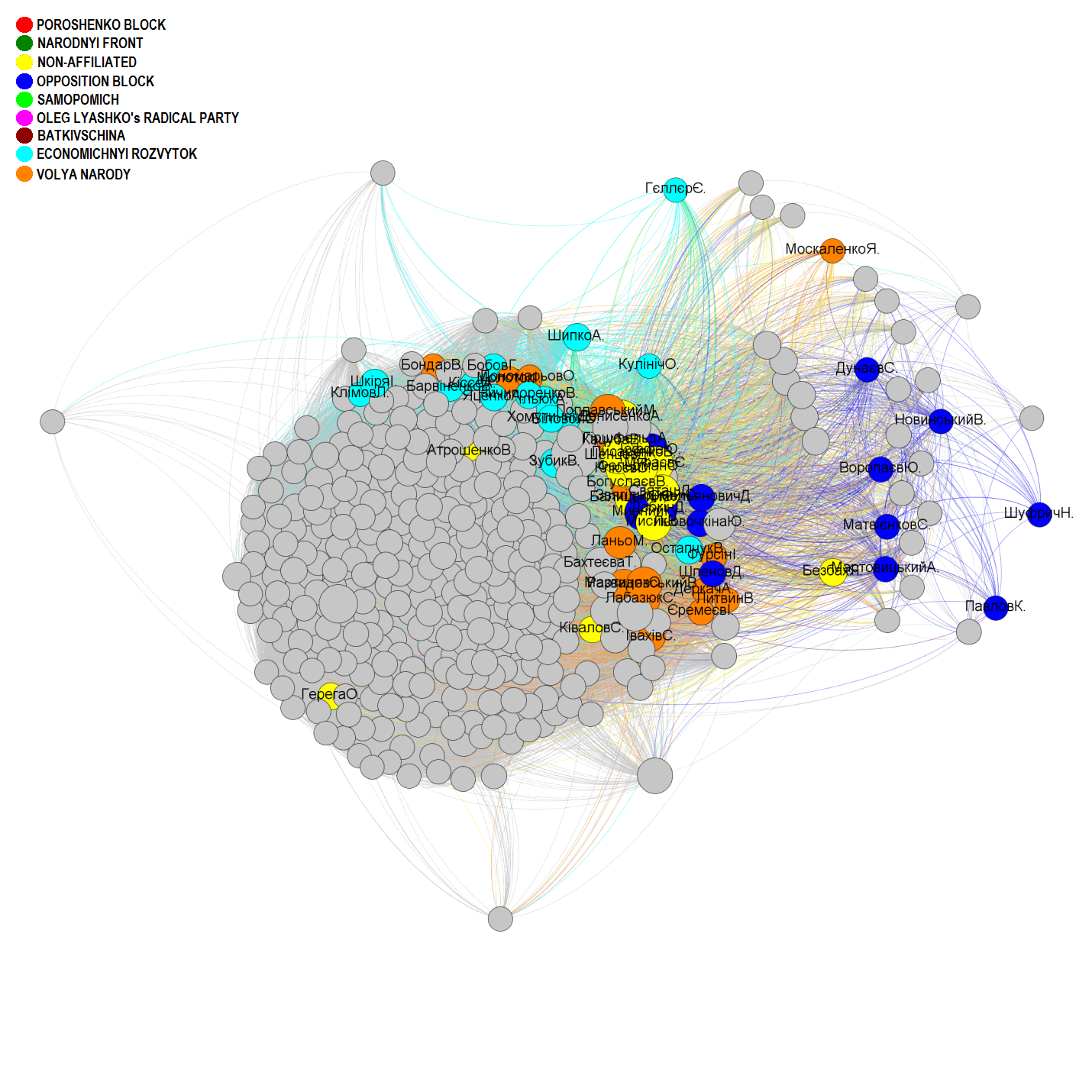 By Dmitriy Ostapchuk and Tymofiy Mylovanov and the working group on the Rada Report Challenge by VoxUkraine, including Natalia Shapoval and Ksenia Alekankina.

Special Thanks to the VoxUkraine iMoRe Index for Monitoring of Reforms for providing the data on ranking of laws.

Special Thanks to Rada Deputy Hanna Hopko for encouraging us to start Rada Report Challenge.