Ukrainian economy in grave need of cheap energy to survive. But the war in eastern Ukraine cuts the country out of its main energy source – coal. In fact the brutal armed conflict is not the only major problem that threatens the main energy bloodline of Ukraine.

How crucial is Eastern Ukraine coal?

The collapse of coal production in the territories controlled by the self-proclaimed DNR and LNR is an outcome of conflict in eastern Ukraine. As of December 1, 2014, the coal reserves at Ukrainian coal-fueled power plants decreased by 2.5 times relative to the same period last year. Given this sharp deficit of coal, Ukraine’s Cabinet of Ministers was forced to look for coal abroad to cover the shortage. Ukrinterenergo, a state-owned foreign trade company, signed a contract with British Steel Mont Trading Ltd to purchase 1 million tons of coal from South Africa in August. The first South African coal was delivered at the end of October, but due to some political factors South African coal was declared unfit for the usage. Because Ukraine cannot take out about three million tons of coal from the Donbas (extracted by Ukrainian state-owned mines), the nation’s leadership has no choice but to continue looking for the alternative energy suppliers. Kazakhstan could export coal to Ukraine from Ekibastuz coal field and cover some of Ukraine’s needs.

Given reduced import of Russian gas, having a stable supply of coal is critically important for the energy security of Ukraine. Today, the major obstacles to its security are ongoing armed conflicts in the war-torn region of Donbas, which halted the work of 68 coal mines. However, even if the peace is established in the region, the industry will still have many problems.

More Than Just Gas: Is This Natural Resource The Reason For The Ukraine Civil War? http://t.co/Smk5klKR2o

The eastern Ukraine coal crisis was bad even before the war

Since the collapse of the Soviet Union, Ukraine’s coal industry was in a severe crisis, which was a continuation of the trend that started in the Soviet period: coal production fell from 216 million tons in 1975 to 189 million tons in 1985 and even more sharply later from 165 million tons in 1990 to 71 million tons in 1996. The Donbas has been experiencing the difficulties typical for the coal-mining regions of Germany (Ruhr), the UK (North East England), Poland (Upper Silesia) and Russia (Kuzbass) in the last third of the 20th century. A large number of unprofitable mines and quarries, alive exclusively due to the financial support from the state budget, was a clear signal that the industry needs a thorough reform that would help to make the industry more profitable. 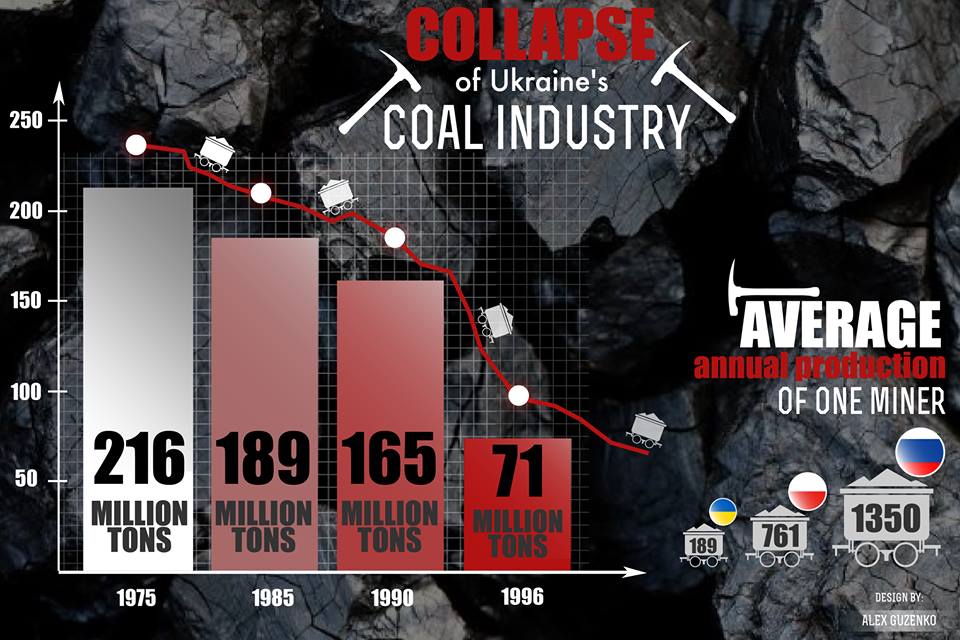 Strong trade unions in the mining industry were a serious obstacle to these steps. Although in the 1990s the number of miners did not exceed 5% of total employment in Ukrainian economy, miners triggered more than a half of all organized strikes at that times. Their demands had not only economic (e.g. provide each miner’s family with a separate apartment), but also political, be it the constitutional nature provision to the Declaration of State Sovereignty of Ukraine (1991) and holding of early presidential elections (1993). Moreover, their actions had a serious impact on the political spectrum within the higher echelons of power. So in 1993 after the miners’ march on Kiev, Yefim Zviagilskiy, who was the director of the Zasyadko mine and the chairman of the Donetsk executive committee and Donetsk City Council, was appointed to the First Deputy Prime Minister. Largely because of his influence, the Cabinet allocated the huge subsidies for the coal industry, the total amount of which at the end of 1993 was a record-breaking: 3.8% of GDP. The situation significantly changed after Leonid Kuchma was elected as the President of Ukraine in 1994. Coming from Dnepropetrovsk, he tried to limit the influence of the Donetsk clan, which could have been done via restricting of the Donbass coal industry. Given a high inflation and a severe contraction of GDP, the government could reduce the amount of subsidies for the coal mines to 0.7% of GDP in 1995. At the same time the Cabinet began intensive negotiations with the World Bank which lead to a program of radical reforms aimed to create a competitive coal market in Ukraine.

In December 1996, the World Bank and Ukraine’s Cabinet of Ministers signed an agreement on the allocation of 300 million dollars intended for coal reform implementation. Over the next four years about seventy unprofitable mines were closed, which led to the dismissal of more than 150 thousand employees. However, the industry continued to depend on the subsidies: at the end of 2000 the subsidy was close to 1.1% of GDP. Yulia Tymoshenko— Deputy Prime Minister for Energy in a pro-reform government of Viktor Yushchenko, who headed the Cabinet of Ministers in 1999-2001—apparently had to resign when the government after an attempt to eliminate the subsidies. Vitaliy Hayduk, her successor, previously worked as Deputy Head of the Donetsk Regional Administration and was also involved in the creation of the Industrial Union of Donbass Corporation that traded gas. In December 2002 Viktor Yanukovych, the former governor of the Donetsk region, became the Prime Minister and ensured the preservation of coal industry subsidies. The situation did not change after the Orange Revolution, too: during the period from 2005 to 2010 the amount of subsidies increased from UAH 3.3 billion (0.74% GDP) to UAH 7.7 billion (0.71% GDP). 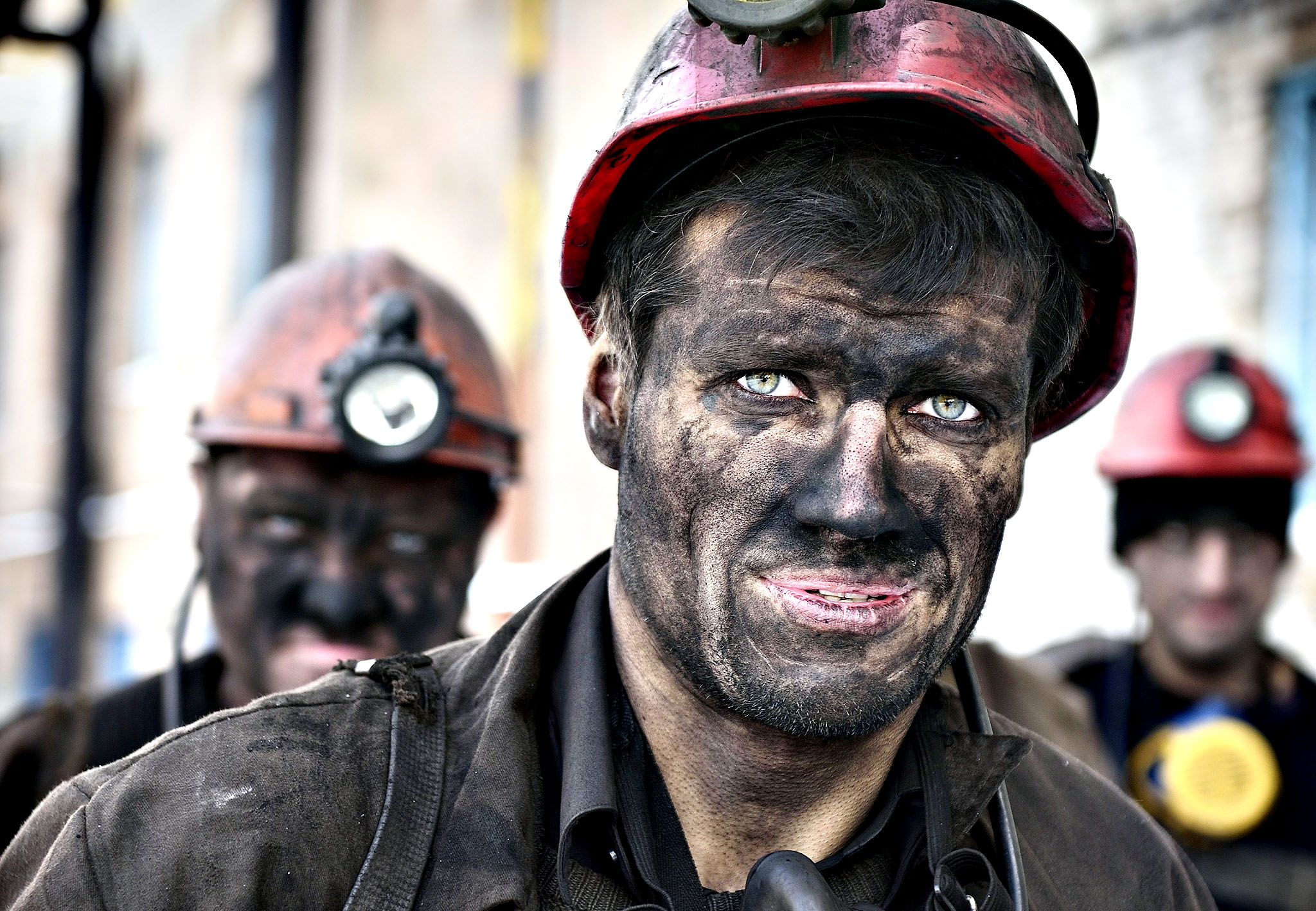 Eric Feferberg/AFP Miners return from their shift at the Kalinina coal mine in the eastern Ukrainian city of Donetsk, controlled by pro-Russian rebels on Monday

A number of problems of the coal industry remains unresolved to this day. First of all, the productivity is low. While the average annual production of one miner in Poland in 2007 stands at 761 tons of coal, the Ukrainian counterpart got only 189 tons. Difficult mining conditions (the average depth of current existing mines is 700 m) result in an extremely high death and injury rate: the number of deaths in mining accidents per 1 million ton of coal extracted is 2.2 as of 2008. For comparison, in Russia, even during the unfavorable for the coal industry year of 2007, when the release of methane in the Ulyanovsk Mine took the lives of 110 people, this rate was 0.77. The other Achilles heel of the Ukrainian coal industry is maintenance of the non-market pricing, a key role in which is played by “The Coal of Ukraine” State Enterprise that buys the coal from state mines and resells it to the power plants.

The Russian reform of the coal industry in the 1990s could be a template for Ukraine. At the dawn of the first post-communist decade, the industry experienced a severe crisis: In ten years the coal extraction dropped in half. The restructuring process began in 1994. Since that time 188 mines and quarries had been liquidated and more than half a million people were dismissed. The cornerstone of the reform was privatization: while in 1993 the share of coal extracted by the private companies was only 5.5%, by 2007 the share increased to 99.9%. The level of production itself has grown – over 30%.

The subsidies allocation from the federal budget were almost entirely suspended. Existing unds were used t to finance the social and environmental programs related to the settlement of the restructuring consequences only. No less dramatic changes were applied in the safety measures: the total death toll in the Russian mines dropped from 277 people (1994) to 85 (2006). The labor productivity in the industry increased dramatically: from 1995 to 2008 the average annual output per employee increased from 200 tons to 1350 tons of coal. Finally, for the first time in its recent history Russia has become a net exporter of coal: 120 million tons of coal mined in the country were exported abroad in 2011. At the turn of the 1990s this looked fantastic.

An important outcome of the industry restructuring is the increase of the share of coal extracted in Russia in a cheap and productive way up to two-thirds of its total production. The share of costly and accident-prone underground mining fell from 50% in the early 1990s to one-third in the mid-2000s. The main production growth was achieved through developing fields in the Far East and Siberia, while mines situated in Rostov region (eastern Donbass) has a decline. 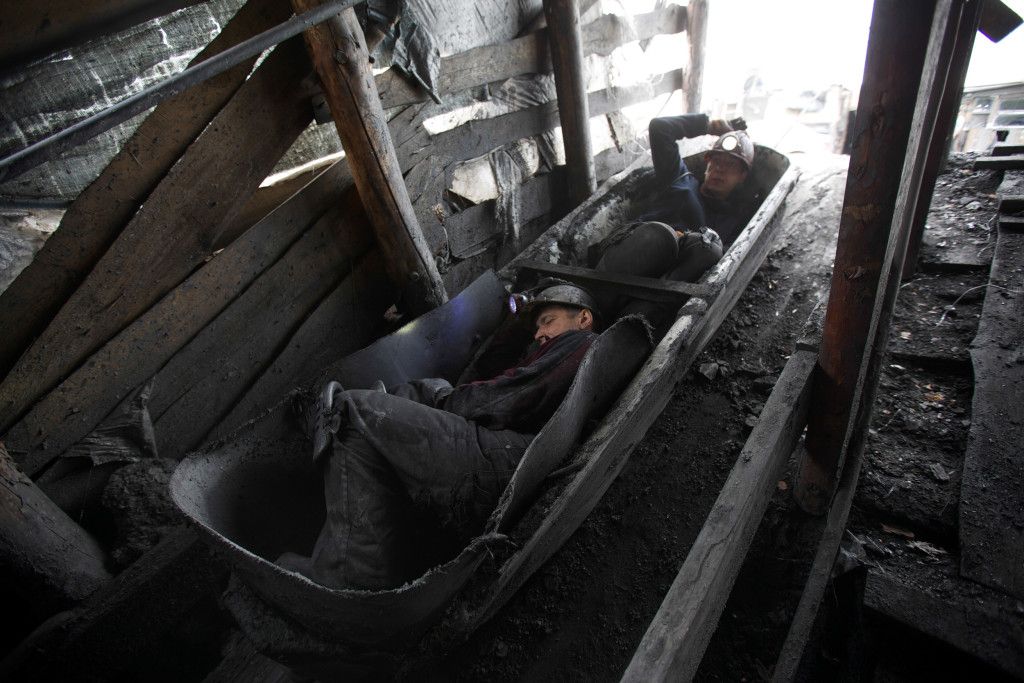 Sergei Ivanov and Vovka hunched over in a canoe-like vessel that they call the “Boat” that will take them 390 feet below ground level inside this illegal mine in Shahtersk, eastern Ukraine on April 28, 2014.
During their eight-hour shift they dig out and send up about 15 – 20 “boat” loads, between them they make about the equivalent of only three US dollars for every load they told me.
Two month ago, they lost a friend and fellow miner at another illegal mine when the steel cable attached to the “Boat” snapped and the miner fell to his death deep underground. (Ghazi Balkiz/ NBC News) 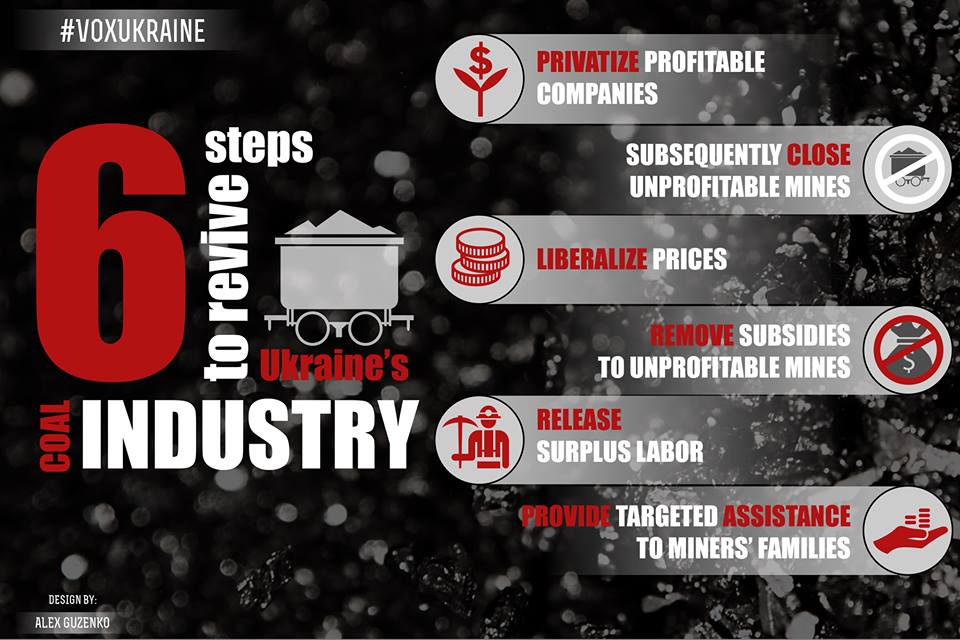 Judging from Russian experience, the collapse of the coal industry in Ukraine’s Donbas was totally predictable and it is not surprising that many mines are not competitive. Therefore, even after peace returns to the Donbas, the region can have sustained growth only if the government finishes the restructuring process, which began two decades ago.

The coal industry of Ukraine needs a new round of reforms that would finally switch the sector to the market economy.

The key transformation components should have been the measures, which at the end of the last century, were used by the majority of European coal-producing countries:

In summary, the Cabinet of Ministers of Ukraine will have to complete the process of closing unprofitable mines, to privatize the remaining state-owned coal mines, and to set free market pricing by (i.e., disband the coal trade intermediary company Coal of Ukraine). As the Russian coal industry restructuring shows, a crucial factor of industry reform success is the provision of the targeted financial support to the families of the fired miners. However, given low social expectations among the local residents in Donbass , this task may be easier than in other cases: stopping the conflict will be the best form of social support. The latter, however, depends on Russia’s political leaders.